A search has been called off for two people missing after a helicopter accident in the Gulf of Mexico (GOM) on 11 June 2014.  It is reported that divers have located two bodies. According to the Federal Aviation Administration (FAA) preliminary report:

N207MY BELL 206 ROTORCRAFT CRASHED IN THE WATER WHILE ON APPROACH TO AN OIL RIG PLATFORM, THE 2 PERSONS ON BOARD WERE FATALLY INJURED, 90 MILES FROM HOUMA, LA

According to press reports, the Bell 206L4 helicopter, operated by Westwind Helicopters, was lost in the in South Timbalier Block 317 Block at 2:40 pm local time, with one pilot and one passenger on board.  Its destination was a platform of Renaissance Offshore, bought in 2013 from Black Elk Energy.  A Renaissance spokesperson said the helicopter went down between 150 and 200 yards from the platform where it was to pick up a mechanic and refuel. It appears the aircraft sank shortly after impact.  The helicopter was reportedly contracted by Wood Group, although they had no personnel onboard. Westwind, based in in Santa Fe, Texas, is a relatively small operator, formed approximately 4 years ago.  N207MY, a single engine helicopter, was manufactured in 2000.  The Bell 206 is widely used by production management companies that are contracted to operate many small production platforms in the GOM.  The number of single engine helicopters in use in the GOM continues a slow decline, while the number of medium and heavy twin engined helicopters continues to increase. 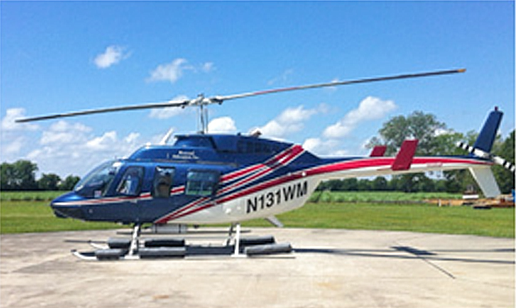 Visual meteorological conditions prevailed and company flight following was in effect. The flight departed an oil platform at 1409, and was en route to the South Tim Bailier 317 platform.

For more details of this fatal B206 accident see:

UPDATE 26 July 2016: The NTSB have issued their final report:

Examination of the helicopter and rotor system did not reveal any preimpact abnormalities. Weather stations located about 26 and 48 miles from the accident site reported favorable conditions with relatively light wind. Given the lack of specific wind information for the accident location and the lack of information regarding the helicopter’s direction, speed, and altitude as it approached the platform, it could not be determined if the helicopter experienced a loss of tail rotor effectiveness.

A medical review of the pilot noted discrepancies between his declared medical conditions and medicine usage and those found during the autopsy and toxicology tests [“2,500 ng/mL of Tramadol, a prescription medication used to treat moderate to severe pain”]. However, there was not enough information to determine whether a medical issue resulted in the pilot’s loss of helicopter control.

The National Transportation Safety Board determined the probable cause to be: “The pilot’s loss of helicopter control for reasons that could not be determined based on the available information.”

This was Westwind’s second accident in less than two weeks (the entire GOM helicopter industry only had 3 accidents in 2013). On 30 May 2014 Westwind’s 1997 Bell 407 N1197 ditched in the GOM in take off.  The NTSB preliminary report states:

On May 30, 2014, about 0945 central daylight time, a Bell model 407 helicopter, N1197, experienced a partial loss of engine power after lifting off from the  Eugene 182A oil rig helipad. The pilot deployed the emergency flotation system and safely landed on the Gulf of Mexico. The pilot and five passengers were not  injured. The helicopter was not damaged during the forced landing; however, it subsequently capsized and was substantially damaged during the recovery effort. The aircraft was registered to GM Leasing Company and operated by Westwind Helicopters Inc. under the provisions of 14 Code of Federal Regulations Part 135 as an on-demand air taxi flight. Visual meteorological conditions prevailed for the flight, which was not operated on a flight plan. The flight was originating at the time of the incident. The intended destination was the Abbeville Chris  Crusta Memorial Airport (IYA), Abbeville, Louisiana.

The pilot reported that after picking up into a hover, he applied forward cyclic to begin the takeoff. About the time that the helicopter reached the edge of the platform, the engine started to lose power. He nosed the helicopter forward to clear the platform. The low rotor speed horn came on and the warning light illuminated. The pilot inflated the floats, leveled the helicopter, and landed in the water. After shutting down the engine and securing the main rotor, the passengers and pilot exited the helicopter.

UPDATE 30 April 2016: The NTSB have issued their final report:

A post-incident engine examination revealed a rupture in the brazed patch area of the outer combustion case (OCC). Metallurgical examination revealed a fatigue crack in the outer skin beneath and extending beyond the perimeter of the patch. The portion of the patch adjacent to the rupture had braze material nearly covering the mesh screen. The braze alloy had also flowed into the crack and covered portions of the fracture surface. The evidence is consistent with the patch being rebrazed after the crack had formed, likely in an attempt to repair the crack. In addition, the braze alloy composition in this area did not conform to the engineering drawing requirement.

The engine maintenance manual permitted welding to repair OCC cracking; however, it did not authorize brazing to repair OCC cracking. The maintenance records provided by the operator indicated that cracks had been repaired by welding about 3 years before the incident. The records did not include any subsequent entries related to the OCC, which precluded a determination of when or by whom the unauthorized braze repair had been attempted. Although the OCC was last inspected about 100 hours before the accident, it could not be determined whether the cracking would have been visible or concealed under the repair patch at that time.

The National Transportation Safety Board determines the probable cause(s) of this incident as follows:

The improper repair of the outer combustion case, which led to its ultimate failure due to the continued progression of a fatigue crack and resulted in a partial loss of engine power during takeoff.

UPDATE 4 January 2017: Pursuing a Passion – a feature on Westwind.

For GOM safety statistics see the website of HSAC (the Helicopter Safety Advisory Conference) and see our article: Helicopter Ops and Safety – Gulf Of Mexico 2014

Aerossurance have specific experience of successful safety improvement projects in the Gulf of Mexico.  To discuss the issues raised here and how to gain assurance that aircraft you contract are being operated safely contact us at: enquiries@aerossurance.com