The Helicopter Safety Advisory Conference (HSAC) has been publishing data on the Gulf of Mexico (‘GOM’) offshore helicopter fleet and its safety since 1995.

They report that flying activity has remained “relatively constant” for the last several years, with just under 300k flying hours, using 415 helicopters, operated by 13 companies in 2014 (the big three are Bristow, ERA and PHI, with RLC strong in the single engine sector).

The number of single engine helicopters continues a “slow decline”, down 14% since 2010, 26% since 2008 and 37% since 2005.  In fact, in 2005, the single engine fleet was 424, more than the total for all types in the current GOM fleet.  This perhaps is indicative of the economic decline in the small ageing coastal fields.

The number of heavy twins (mainly Sikorsky S-92As and with a few Airbus Helicopters H225s) however has doubled in the last 5 years, trebled in the last 10 and increased 8.6 fold since 1997, as more deepwater exploration and production has occurred (as demonstrated by the last few seconds of the animated map below, a 2008 MMS report and a deepwater field status listing).

Between 2013 and 2014 there was also a noticeable 21% drop in the number of medium twins. However flying hours dropped by just 3%, suggesting the GOM operators have retired many of the older aircraft, Sikorsky S-76As in particular, and are now achieving higher utilisation.

In fact in 2014 the average utilisation was:

The medium / heavy twin usage per aircraft is approximately 20% less that the average for the UK North Sea fleet.

There were just two accidents in 2014 using NTSB data (one fatal, with two fatalities).  There were however also two ditchings in 2014, both due to loss of engine power.  These were not recorded as accidents by the NTSB (as would have been the case in most other countries).  Consequently, according to HSAC:

We covered the fatal accident last year in more detail.

UPDATE 17 February 2016: Having completed a study of the US HEMS safety record we have also plotted HSAC data (including all ditchings as accidents), first back to the start of the start of the International Helicopter Safety Team (IHST) in 2006: 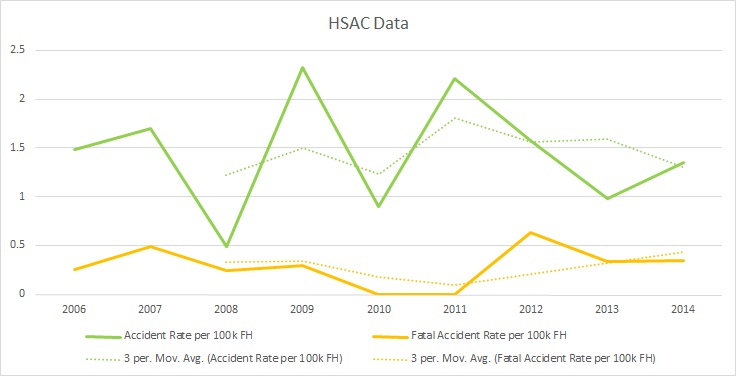 If we look over the full span that HSAC published data: 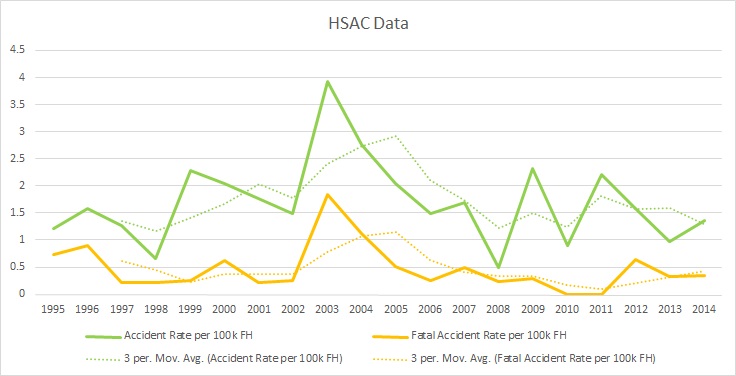 Here a rise of accidents (but not fatal accidents) from the mid 1990s is evident, peaking in 2003, before a decrease to more steady performance from 2006 onwards.