2014 sees the emergence of a new category of 7-8t ‘super-medium’ helicopters, capable of carrying 16 passenger in offshore configuration, lead by the AgustaWestland AW189 and Airbus Helicopters EC175. These fill the gap between the 19 passenger, 11-12t ‘heavies’ (the Sikorsky S-92A and Airbus EC225) and the ‘mediums’ (such as the 10 passenger Airbus AS365 Dauphin & EC155, Bell 412 and Sikorsky S-76 series, that weigh in at around 4.5-5t, and the slightly larger 12 passenger AgustaWestland AW139 launched at 6.4t).

Eurocopter (now Airbus Helicopters) launched the EC175 programme in December 2005, when Eurocopter signed a development agreement with Chinese partners (the Harbin Aircraft Industry Group) to develop a new aircraft in the 7.5t class.  The Chinese version will be certified separately as the Z15.  The company’s newest heavy type, the 11t EC225 had entered service that summer with launch customer Bristow.  The EC225’s main competitor the 12t Sikorsky S-92A had entered service with PHI in the Gulf of Mexico in September 2004 and in Norway with Bristow February 2005.  Both EC225 and S-92A were larger, more capable aircraft than the preceding heavy generation, capable of longer range flights with a full 19 passenger load.  However, while that capability was welcome for some offshore helicopter contracts, it was not cost effective for every contract.  The main stay of the Northern North Sea (NNS) fleet had previously been 18 seat 8.6t AS332Ls.  These aircraft continued to be popular for some of the shorter range (100-150nm) contracts and some of the ‘thinner’ contacts that don’t need 18 or 19 seats.  In other locations, such as the Southern North Sea (SNS), helideck size restricts use of the larger aircraft too.  Hence, the potential for ‘super-mediums’ emerged. Initially the EC175 hit milestones on schedule. The Preliminary Design Review was in December 2006, the Critical Design Review in December 2007, public unveiling at Heli-Expo 2008 in Houston and first flight in December 2009 from the Airbus factory at Marignane, just outside, Marseille.  In 2010 EASA and the Chinese aviation authority, the CAAC signed a cooperation agreement for the parallel certifications of the EC175 and Z15: http://easa.europa.eu/system/files/dfu/EC175%20Z15%20Working%20Arrangement.pdf

Unfortunately EC175 progress slowed. Some press reports in late 2012 suggested that development of the proprietary Helionix avionics had been ‘far more demanding and complex than for previous legacy avionics systems’.  Others suggest that the EC225 main gear box diverted attention.  No doubt the reality was more complex.  Type certification consequently delayed from late 2011 until February 2014, just days before its main rival, the AW189.  At the same time an EC175 was undergoing cold-weather testing at Yellowknife in Canada’s Northwest Territories to expand the certified temperature envelope, with other envelope expansion testing at high temperatures and high altitudes due this summer. During May 2014 Airbus Helicopters carried out a successful North Sea demonstration tour, visiting Norwich, Aberdeen, Stavanger, and Ostend.

Deliveries to Belgian operator Noordzee Helikopters Vlaanderen (NHV), Russia’s UTAir and Héli-Union of France are expected later in the year (Q3 Aerossurance expects).  Certification of an increase in take off weight to 7.8t is planned for 2016.

Through mid-September, a total of nine pilots have gone through the training, according to Allongue, including instruction for operators using a fixed-base flight navigation procedures trainer (FNPT III) for oil-and-gas modules. In July, the first pilots from France’s Heli-Union became type-rated while the first technicians from Russia’s UTair became the first to receive maintenance training on an EC175 mock-up in Marignane.

There are currently 64 EC175s on order, mainly for oil and gas operators with less than 10 representing corporate/VIP operators…

Airbus Helicopters has confirmed that Belgian operator Noordzee Helicopters Vlaanderen (NHV) will be the first customer to receive the super-medium EC175 on 11 December. 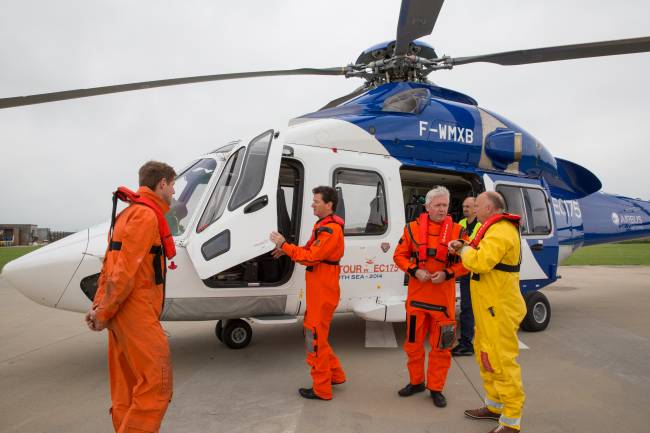 While Eurocopter has a focus on the oil and gas sector for the EC175 from the beginning, their main European competitors, AgustaWestland (AW), originally were looking at the military market when they conceived the AW149.  A key target was the competition for over 100 aircraft for the Turkish Utility Helicopter Program.  The 8.6t AW149 is crudely a scaled up version of the company’s exceptionally successful AW139 medium, stretched, widened and up-engined.  Publically revealed at the 2006 Farnbourgh Air Show, the first prototype AW149 flew in November 2009. The second AW149 prototype, with production standard engines and transmission flew in February 2011.  Unfortunately, in April 2011, the Turks announced they were going to order Sikorsky Black Hawk helicopters instead.  Not to be dissuaded, that summer at the Paris Air Show AW announced the 8.3t AW189 aimed at the civil market. Capitalising on the prior AW149 work and the slip in certification of the EC175, AW have been able to make rapid progress, with early sales  and first flight of the prototype AW189 in December 2011 (registered I-RAIH, but with a serial number 49003 that gives its AW149 origins).  The first production AW189 made its maiden flight at AgustaWestland’s Vergiate plant in Italy in October 2013.  Type certification slipped slightly from the target of late 2013 until 7 February 2014, just days after the EC175.

The launch customer is Bristow who ordered their first 6 in late 2011 for oil and gas use and have since ordered 11 to be part of the UK SAR fleet.  Two Italian made AW189s have been placed on the UK register, G-OENA and G-OENB (for ‘One Eight Nine’), serial numbers 49007 and 49008 respectively.  Both are now at Norwich for crew training.  In October 2013 it was announced that the first aircraft would commence operations for GDF SUEZ E&P UK from Norwich.  At the time Jean-Claude Perdigues, GDF’s MD said: ‘The AW189 is of the highest technical specification and we are privileged to provide this new generation aircraft for passenger transfers as we move towards first gas from Cygnus, the largest gas discovery in the Southern North Sea in the last 25 years, in 2015.’ Oil and gas operations in Norwich are due to commence very shortly at the end of the work up process. Bristow’s first SAR AW189s are in build, all but the first at the second production line, in Yeovil.

UPDATE November 2014: The first Italian built SAR aircraft has been seen in the UK. UPDATE 20 November 2014: Flight International report on potential contingency plans if the SAR AW189 are late due to SAR certification reasons.

Fort Worth, Texas based Bell Helicopter Textron may take exception to the concept this is a new category of helicopter.  In 1982 Bell gained certification of the Bell 214ST, an 8t helicopter, which was introduced into the North Sea by British Caledonian Helicopters (later taken over by by Bristow) and Helikopter Service in Norway (absorbed into CHC).  In many ways the B214ST was a ‘marmite’ helicopter (inspiring either clear love or hate).  In the end, sales petered out at 96. As early as 2005, Bell were seeking customer feedback on a potential concepts for a super medium. However, the company hesitated and lost momentum.  Their own website implies that they initially down scaled the concept to 12 seats (closer to their current B412 and the AW139 that Bell initially was a joint venture partner in), working under code names ‘Project X’ and ‘Magellan’.  Based on apparent customer feedback, the Bell 525 was finally unveiled at the 2012 Heli-Expo in Dallas, having expanded back to a super-medium.  The lead customer is US Gulf of Mexico operator PHI.

Bell currently predict the 525 first flight will be ‘late 2014’ and very optimistically claim certification is expected in 2015.  The company started flying the rotor system planned for the 525 on a 214ST to gain early development experience, but suffered a set back when that experimental test bed lost a (standard) tail rotor in August 2012, overturning in a Texan cotton field during the subsequent autorotation emergency landing. The 525 introduces a fly-by-wire flying control system with dual side sticks in place of conventional cyclic and collective controls as part of Bell’s ARC (awareness, react and control) cockpit concept.  While not unique on modern aeroplanes, experience on civil helicopters with FBW is low, as is another planned feature, a touchscreen interface. Based on the information currently publicly available, Aerossurance would be impressed if the type was certified in 2016.  The true value of the 525’s more innovative features is also to be proven.

UPDATE 12 November 2014: Flight International publish a Bell 525 Relentless cutaway and technical description Note the slightly odd door / seating arrangement which means the crew enter via a door used by the first (forward facing) row of pax (the other three rows of pax share the sliding door).

UPDATE 8 July 2016: On 6 July 2016, Bell Helicopter lost the first prototype, N525TA, in a flight test accident in Texas.  The aircraft broke up in flight and both test pilots died.