The Transportation Safety Board of Canada (TSB) has issued a report on a fatal accident to Fairchild SA227-AC Metro III, C-GFWX, operated by Perimeter Aviation at Sanikiluaq, Nunavut, on the coast of Hudson Bay on 22 December 2012. The route from Winnipeg is normally operated by sister company Keewatin Air, but Perimeter were chartered to help catch-up a backlog due to poor weather.  According to the TSB:

The ground track flown from the initial arrival from the west up to final impact (Credit: TSB)

A second NDB Runway 27 approach was conducted with the intent to land on Runway 27. Visual contact with the runway environment was made after passing the missed approach point. Following a steep descent, a rejected landing was initiated at 20 to 50 feet above the runway.

The final, tailwind, approach had been unstable.

The vertical profile of the final approach (Credit: TSB)

…that the aircraft came in too high, too steep, and too fast, striking the ground 525 feet past the end of the runway after an unsuccessful attempt to reject the landing.

The 2 crew and 6 adult passengers, secured by their seatbelts, suffered injuries ranging from minor to serious. A lap-held infant, not restrained by any device or seatbelt, was fatally injured. 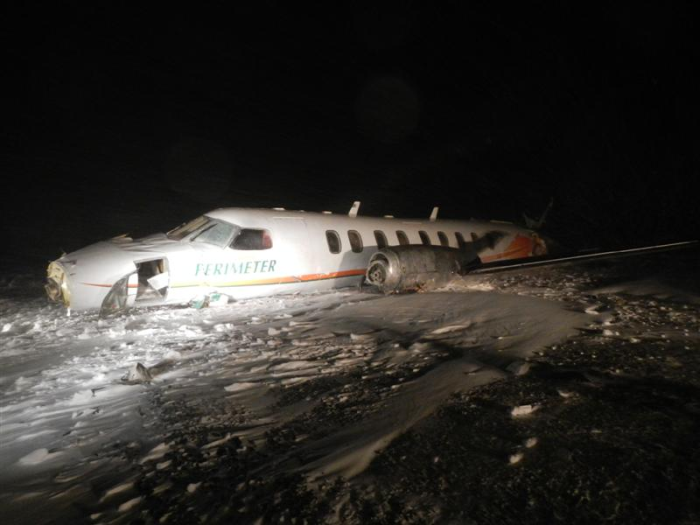 At a news conference on release of the report, investigators said inclement weather, poor visibility, fatigue and a departure from established protocols all played a part in the accident. As the company did not normally fly this route there had been problems obtaining approach plates and survival kits (which were to be borrowed from their sister company).  These problems and a defective cargo door indication delayed departure.  The TSB commented:

The captain felt frustrated as a result of the pre-flight preparation issues, and it is evident from analysis of his speech that signs of frustration persisted after takeoff. The captain’s use of 43 expletives in conversation with the first officer (FO) during the non emergency, non stressful, 2-hour period preceding the occurrence, showed a rate of approximately 21.5 swear words per hour. This type of behaviour was seen as being out of character for the captain.

They added that circadian rhythm, the long day and a 1.5 hours wake period in his previous nights sleep mean…

…acute sleep disruption may have played a role in the captain’s behaviour during the flight by increasing the risk for fatigue and its associated performance decrements.

Two recommendations were issued in relation to the carriage of infants.  The airline issued a statement on their actions after the accident.

It is remarkable that a generation after the first CRM training, some passenger aircraft can operate within Canada without the crew having CRM training.

Aerossurance has extensive experience in aviation safety assurance and SMS implementation & operation.  For advice you can trust, contact us at: enquiries@aerossurance.com