A320 Collided with Two De-Icing Trucks

The German accident investigation agency, the BFU, reported in December 2017 on a serious incident in Munich on 20 January 2016 when an Iberia Airbus A320, EC-LVD, almost knocked two de-icing trucks over. 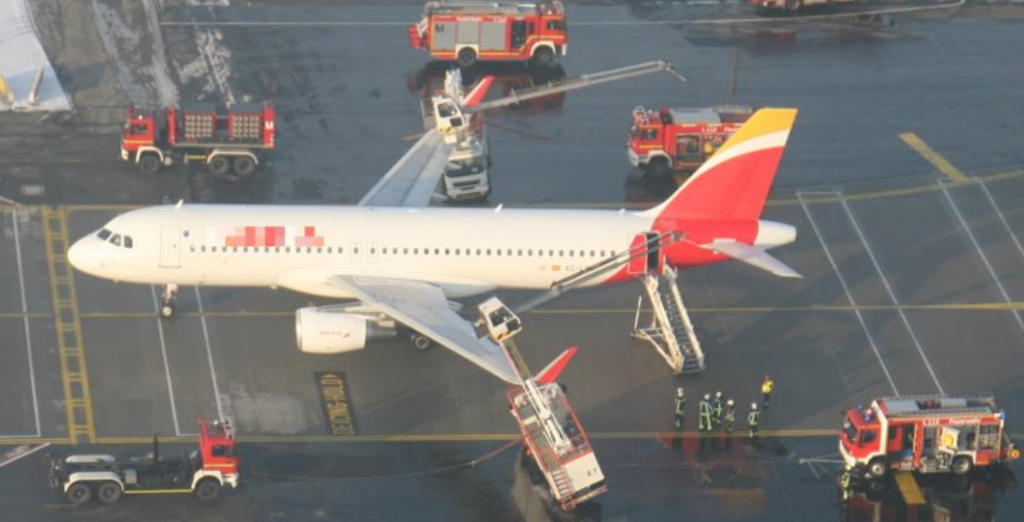 Iberia A320 EC-LVD at Munich in Contact with Two De-icing Trucks (Credit: Police via BFU who have redacted Identifying markings)

The loaded aircraft had taxied from its stand to go to de-icing area DA14:

The Cockpit Voice Recorder (CVR) recordings showed that the co-pilot listened to ATIS during taxiing and then informed the Pilot in Command (PIC) about the content while the aircraft at 0745:32 hrs taxied straight past the turn-off to taxiway B14 with approximately 20 kt. About 60 m east of the turnoff the speed of the airplane began to decrease and at 0745:50 hrs had reached approximately 6 kt.

After the ground controller had noticed that the airplane had taxied past the cleared taxiway he instructed the flight crew at 0745:52 hrs: “Hold position […]”, and about 20 seconds later added: “[…] you missed de-icing area one four in bravo one four. Are you able to turn sharp right for bravo one four and de-icing area?” The flight crew answered that they could do that.

The aircraft turned and taxied back to DA14, establishing radio contact with the de-icing vehicles at 0748:08 hrs. The vehicles were standing at their respective taxiway edge markings facing inwards.

At 0748:30 hrs the pilots began to complete the Before De-icing Checklist. At 0748:49 hrs the PIC requested the copilot to select the DITCHING switch to On and added: “Confirma, ditching?”. 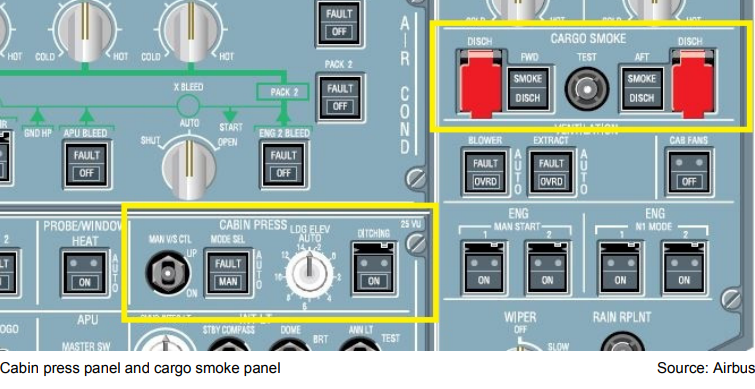 Three seconds later the pilots began a conversation about the fact that just now the fire extinguishing system for the cargo compartment had been activated instead of the DITCHING switch.

Over the next few minutes the crew investigate and decide they need to return to the stand.  A number or radio calls were made, initially to the de-icing team and then the ground movements controller.

The FDR recording showed that at 0756:57 hrs the parking brake was released and the thrust levers of both engines were pushed forward. The engine thrust N1 started to increase at 0757:00 hrs and the airplane began to move. The speed increased to approximately 3 kt. At 0757:10 hrs the FDR recorded a change in longitudinal acceleration from 0.2 g to -0.15 g. Two seconds later the wheel brakes were actuated and at 0757:16 hrs the parking brake was set again. At 0758:23 Hrs the PIC informed the controller that the airplane had collided with both de-icing vehicles.

The aircraft’s winglets had collided with the booms of the de-icing vehicles and were slightly damaged. The vehicles had tipped by about 20° and the drivers trapped in the cabs c6m from the ground. The BFU say “the probability of severe injuries of the de-icing personnel was great”.  Both were rescued by fire-fighters unharmed. 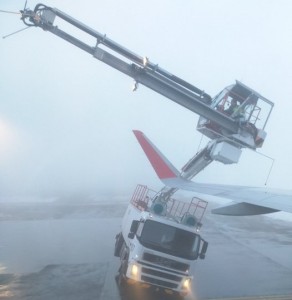 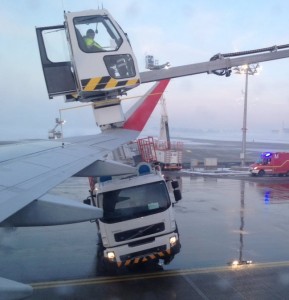 After the controller had issued the taxi clearance the flight crew had looked right and left and seen no obstacles. Then the PIC began taxiing. He had had the impression that the parking brake had still been set. Therefore he actuated the wheel brakes.   The [icing] team leader stated [that] …he de-icing vehicles had been positioned left and right of the airplane in a distance of 4 – 5 m in front of the wings. Immediately before the de-icing would have started, the cockpit reported a technical problem. The team leader had responded: “… we will wait”. No de-icing fluid had been applied at that time. The team leader heard the aircraft engines ramping up and observed that the stop bar lighting on the taxiway in front of the airplane was switched off and the airplane began to move. After the collision he radioed the flight crew and they acknowledged that the airplane had been stopped.

A Difference in Understanding The flight crew had radioed the de-icing team:

“We need to go back to the stand please. We have one problem” [as] the PIC wanted to inform the team leader that de-icing would no longer be needed since the airplane would not depart. The team leader answered: “You have technical problems, we will wait”. The BFU is of the opinion that this shows that he had understood the information regarding the problem but not comprehended the decision of the PIC to taxi back to the parking position. It is highly likely that he assumed there would merely be a delay of the deicing procedure. The PIC on the other hand did not realise that the team leader’s words: “we will wait” indicated that his request to abort de-icing had not been understood completely and that the vehicles would remain in their positions.

Subsequent communication was with ATC on a different frequency. The Switches

A procedure had been established for preparing the aircraft for the de-icing procedure, which the flight crew had to implement by completing the respective checklist. In addition, the DISCH switch had been protected against inadvertent activation by a red cover (red guarded button). The pilots worked together routinely. The BFU is of the opinion that the erroneous activation was caused by lack of concentration of both pilots; the co-pilot as executor and the PIC as pilot monitoring. It is possible that the similarity in lettering (DITCHING and DISCH) aided the mix-up.

Even though the de-icing plan valid for Munich Airport contained procedure descriptions and stipulations for the phraseology applicable for the communication between de-icing personnel and pilots the team leader did not demand “ready for deicing” confirmation from the flight crew. Neither the phraseology of the de-icing plan nor the AEA document contained precise stipulations for the communication if the deicing procedure had to be aborted. This case shows that neither the pilot nor the team leader had used the wrong wording. Still both did not fully understand the other’s information; instead they understood what fit their mental image of the situation (confirmation bias). De-icing companies and operators have recognised the importance of standardised communications and accepted their application, but there was no extensive ICAO standard phraseology in place for the de-icing process, which would apply for pilots and de-icing personnel. Therefore the possibility for miscommunication was increased.

The CVR recording shows that neither of the two pilots acknowledged the obstacle clearance in the area of the wings for e.g. with the words left and right side is clear. Contrary to the PIC’s statement that they had checked left and right and not seen any obstacles, the BFU is convinced that neither pilot had directly looked toward the deicing vehicles. It is very likely that the pilots had concentrated in this phase on the part of the runway into which they were about to taxi. It is highly likely that the pilots had already regarded the de-icing procedure as settled, because the airplane would no longer depart. In this case this resulted in the ineffectiveness of the visual control.

The BFU say this Serious Incident was due to:

Misinterpretation in the communication regarding the abortion of the de-icing procedure occurred between the PIC and the team leader. Neither of the two pilots checked for obstacle clearance before taxiing. The missing standardised phraseology for pilots and de-icing personnel contributed to the serious incident.

BFU Safety Recommendation No.: 07/2017: The Society of Automotive Engineers (SAE International) should amend the document Aircraft Ground De/Anti-Icing Communication Phraseology for Flight and Ground Crews (ARP6257) to mitigate miscommunication. Section 3.2.2 Abnormal Operations should include the recommendation to standard phraseology for pilots and de-icing personnel in regard to bi-unique communication in case the de-icing procedure has to be aborted. 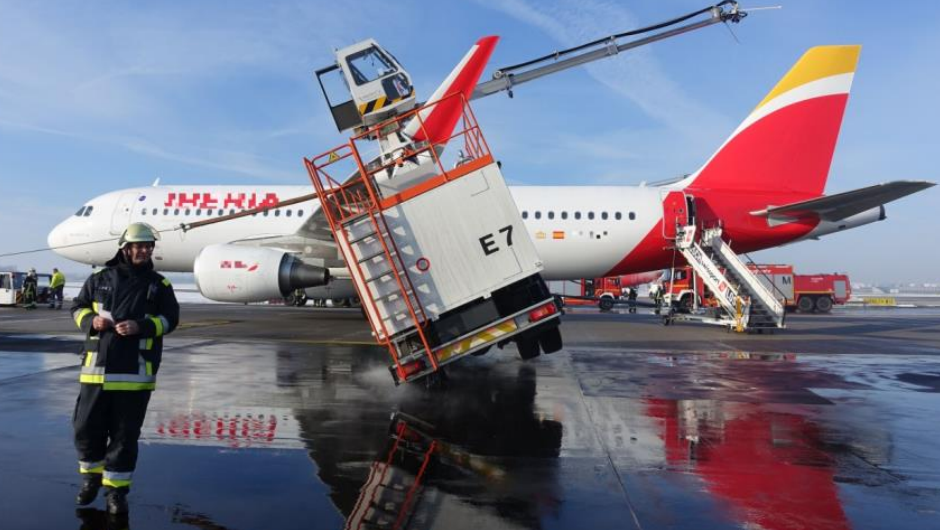 Iberia A320 EC-LVD at Munich in Contact with De-icing Trucks (Credit: BFU)