During the inverted 45 degree portion following the first loop the pilot’s unrestrained publications bag drifted upwards (relative to the cockpit) and aft. The pilot then rolled upright and pulled 5g to complete the Cuban 8. During the 5g pull, the bag dropped down towards the aft portion of the right console and struck the Miniature Detonation Cord (MDC) firing unit (red circle in the photos) with enough force to activate it, fragmenting the canopy. 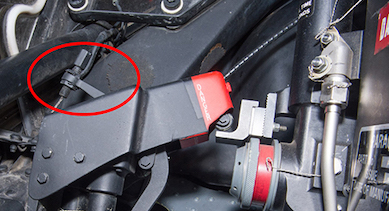 The pilot ceased manoeuvring, slowed the aircraft and [Returned to Base] RTB without further incident.

The pilot received minor injuries from the MDC combustion products and canopy fragments and there was significant damage to cockpit equipment and external airframe structures. 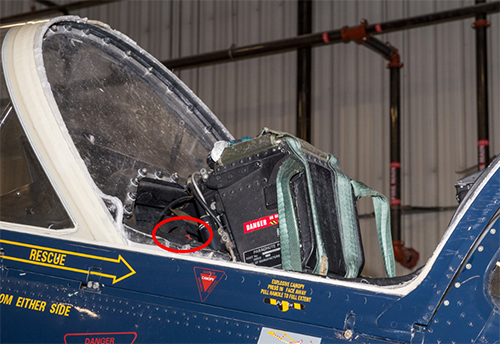 The engine ingested some of the canopy fragments but only received minor damage. Explosive MDC Visible in Canopy – It is Designed To Shatter the Canopy Moments Before Ejection (Credit: vaq136.com)

While aerobatic aircraft are particularly sensitive to loose articles in the cockpit, non-aerobatic aircraft are also susceptible to this threat.  We reported in June 2014 on a Royal Air Force (RAF) A330 Voyager ZZ333, that was involved in a loss of control (LOC-I) incident during a flight from Afghanistan in February 2014.  The aircraft suddenly pitched nose down while in the cruise at 33,000ft.  In 27 seconds, the aircraft lost 4,400ft, with a maximum rate-of-descent of approximately 15,000ft per minute, before recovering.  The resulting negative g forces were sufficient for almost all of the unrestrained passengers and crew to be thrown towards the ceiling, resulting in a number of minor injuries.  The aircraft diverted to Incirlik in Turkey.

The full Service Inquiry report has since been published.

UPDATE 17 April 2016: We also report on a US Air Force (USAF) Air Mobility Command (AMC) Lockheed Martin C-130J, 08-3174 that crashed at Jalalabad, Afghanistan after a loss of control (LOC-I) on 2 Oct 2015.  That accident was caused by the failure to remove a loose article. a Night Vision Goggle (NVG)box, that had been deliberately placed behind the control column during a night-time engines-running turnaround to aid loading by holding the elevator displaced.