A dispatcher was forced to run when an aircraft started to taxi while he was still connected to it.  On 25 January 2017, a Jetstar Airbus A320-232, VH-VGJ was being prepared for pushback from bay 4 at Newcastle (Williamtown) Airport, NSW.

At about 1836, the crew received a clearance from the surface movement controller to pushback, which placed VGJ to the right rear quarter of an aircraft parked on bay 5. 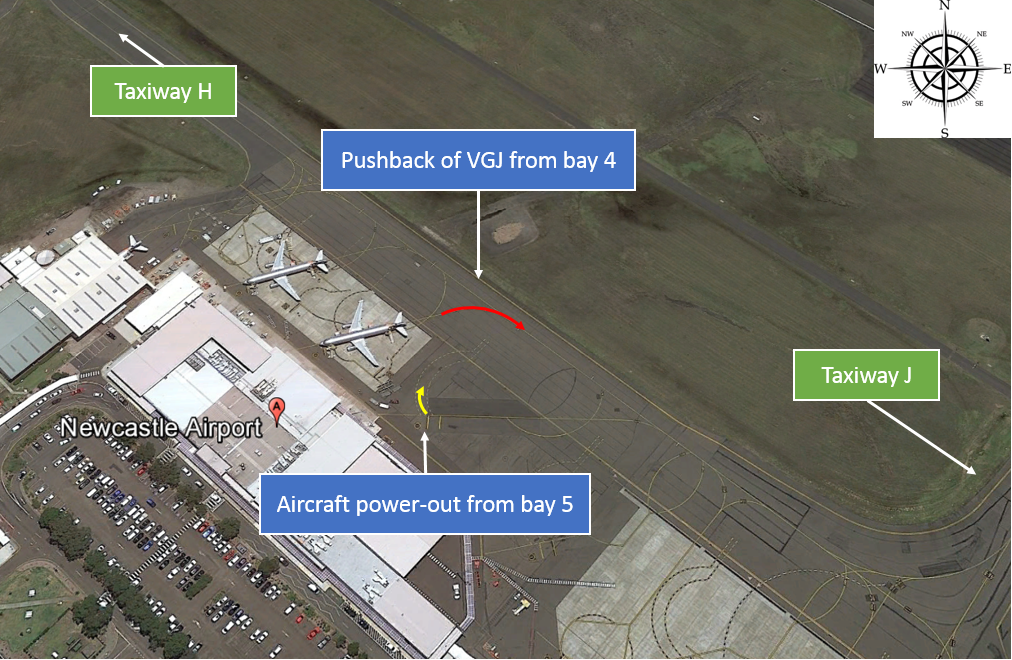 The Scene of the Incident (Credit: ATSB)

The aircraft dispatcher walked beside the aircraft and was connected to the nose of VGJ by a headset for communications with the flight crew.

At about 1838, the crew of the aircraft on bay 5 requested a clearance to taxi for departure.  At this stage, the crew on board VGJ interrupted their ‘after start flows’ to monitor the other aircraft, which they believed posed a collision risk.

At about 1840, the crew on board VGJ requested and received a clearance to taxi for departure.

The dispatcher for VGJ was still connected to the aircraft nose with their headset and waiting for their clearance from the flight crew to disconnect. They observed the taxi lights for VGJ illuminate, then they heard the engine noise increase, and then the aircraft started to taxi.

Once the dispatcher was clear of the aircraft, they turned around to display the nose wheel steering pin to the flight crew, but the captain was not looking towards them.

After starting both engines, the crew conduct ‘after start flows’.  These are memory item checks split between the pilot flying and pilot monitoring.

The announcement to the dispatcher that they are clear to disconnect is the penultimate item.  The last ‘flow’ item is for the flight crew to complete the challenge and response ‘after start checklist’.  The last item on that five point checklist is confirmation that the dispatcher has been sighted clear of the aircraft. Only after completion of the ‘after start checklist’ should the crew request taxi clearance and turn on the taxi light.

The ATSB explain that after the distraction of the aircraft on bay 5 the captain of VH-VGJ misidentified the dispatcher for the bay 5 aircraft as their own dispatcher.

At this time, the tug, which would normally wait beside the departing aircraft for the dispatcher, had moved away from VGJ towards the terminal to avoid a conflict with the bay 5 aircraft. Therefore, the dispatcher sighted by the captain, was next to the tug used for the pushback of VGJ.

This potentially provided an association between the tug and the dispatcher in the mind of the captain, who assumed the dispatcher had removed the nose wheel steering pin and moved away from the aircraft.

Following this serious incident the captain reported that their most important lesson was distraction management.

They considered either slowing down the ‘after start flows’ or re-starting the ‘flows’ as the most practical risk mitigation strategies.

The Flight Safety Foundation (FSF) has issued guidance that after interruptions/distractions, situation awareness should be re-established as follows: