The European Aviation Safety Agency (EASA) has issued their analysis of the main safety risks involving Unmanned Aircraft Systems (UAS) / Remotely Piloted Air Systems (RPAS) / Drone operations.  The aim of the study was to better understand the safety risks posed by the growing use of UAS.

The study used occurrence data from both the European Central Repository (occurrences reported to NAAs of the EASA Member States) from 2010 to May 2016 and also from airlines involved in EASA’s Commercial Air Transport (CAT) Aeroplanes Collaborative Analysis Group (CAG). 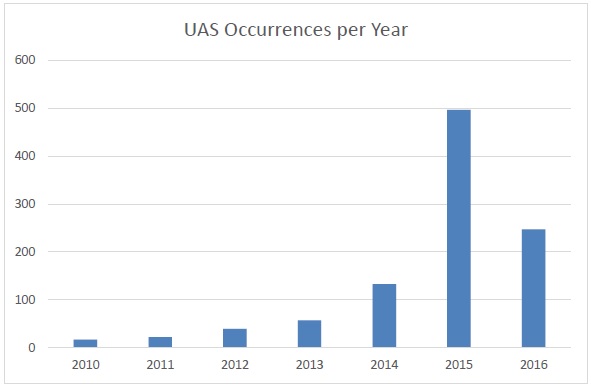 EASA note an “increasing trend” of reports and a “clear and significant jump in 2014”. 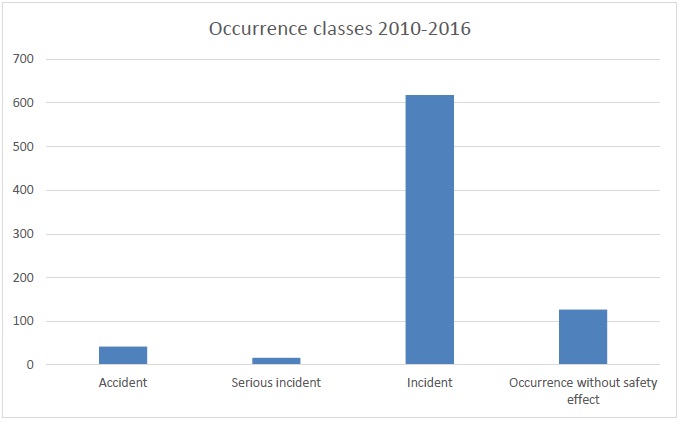 From these occurrences there were 42 accidents, the majority of which resulted from the crash of drone for either technical reasons or due to loss of control. None of these occurrences involved fatalities or injuries.

The first stage in the development of the Safety Risk Portfolio involves the identification of the Key Risk Areas (Outcomes) that derive from the Occurrence Categories in the ECCAIRS Taxonomy. 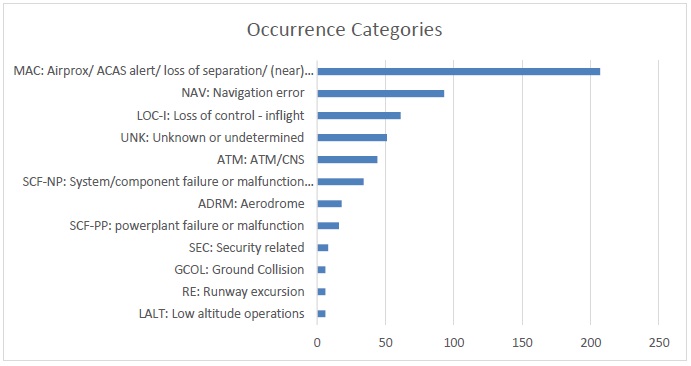 From the most common outcomes the Key Risk Areas can be identified (though some Occurrence Categories are not outcomes and so are disregarded). EASA do note also that “Some of the Key Risk Areas are interlinked and may give rise to another outcome”.

The Key Risk Areas identified were:

The second part of analysis for the development of the Safety Risk Portfolio involves the identification of the Safety Issues that are associated with the different Key Risk Areas.

Normally, this would involve a mainly quantitative analysis however due to the lack of detail in some of the UAS data, the analysis of Event Types can only provide some indications on possible Safety Issues.

The final part of the analysis involved expert discussion with a number of the collaborative groups that support EASA with the development of the Safety Risk Portfolios for the European Plan for the Aviation Safety. These groups include the Network of Analysts (NoA) and the Collaborative Analysis Groups (CAGs). These Safety Issues will be included in the next version of the UAS Safety Risk Portfolio:

EASA has recently published their ‘Drone Collision’ Task Force report.  This came out with the following recommendations:

Recommendation 1: The Task Force recommends that an analytical model of the drone threat should be developed that takes into account a more detailed analysis of the construction of drones and an assessment of the dynamic behaviour of drones and their components, (in particular their motors and batteries,) during an impact. To gain confidence in the model, the method should be validated against laboratory tests, in particular to validate the behaviour of specific drone components such as the batteries or the motors during an impact and to confirm the prediction of the overall frangibility of the drone. This validated analytical model could be used for further impact analysis (see Recommendation 3).

Recommendation 2: The Task Force recommends that a specific risk assessment should be conducted to assess the behaviour of lithium batteries on impact with structures and rotating parts, and their possible ingestion by jet engines. The assessment should, if possible, be supported by testing, and should address the risks of explosion, fire and air contamination.

Recommendation 3: The Task Force recommends that further research should be conducted to establish hazard severity thresholds for collisions between drones and manned aircraft. Impact analyses should be performed to determine the effects of a drone threat (as established per Recommendation 1) impacting aircraft critical components, possibly capitalising on existing computing and software capabilities and other particular risk assessments such as those for bird, tyre and engine debris impacts. To gain confidence in the model, the method should be validated against tests on representative aircraft components such as airframe parts, windshields and rotating elements (i.e. rotors, propellers and fan blades).

Other EASA Reports: Study and Recommendations Regarding UAS Geo-Limitations

EASA has also published a study on Geo-Limitations.  Its main conclusions are:

The Task Force sees JARUS as the right forum to drive these activities forward on the regulatory side. This is because JARUS has gathered together a significant number of national aviation authorities and other relevant organisations, has been working for some years on regulatory material for Light UAS, and now includes representatives of stakeholders directly involved in the segment of small UAS and in the operations that are more likely to be affected by “geo-limitations”.

EASA has recently produce a ‘Prototype’ regulation for the ‘open’ and ‘specific’ drone categories.

This ‘Prototype’ regulation proposes actual rules providing the necessary clarity, notably on what are the responsibilities of the Member States and what is the flexibility offered to them. It has been called ‘Prototype’ to reflect the fact that they should help preparing the formal rulemaking process that will follow. The ‘Prototype’ regulation is supplemented by an Explanatory Note that provides the rational and background for the text.

The intention is to gather feedback which will be used to develop a Notice of Proposed Amendment in 2017.

See our past article: Firefighters Turn Hose on Drone

Aerossurance has extensive air safety, regulatory, design, certification, airworthiness, operations and safety analysis experience, including UAS experience going back to the mid 1990s.   For practical aviation advice you can trust, contact us at: enquiries@aerossurance.com