Beechcraft B200 Super King Air VH-MVL of the Royal Flying Doctor Service (RFDS) was substantially damaged during a single engined landing on 13 December 2016. 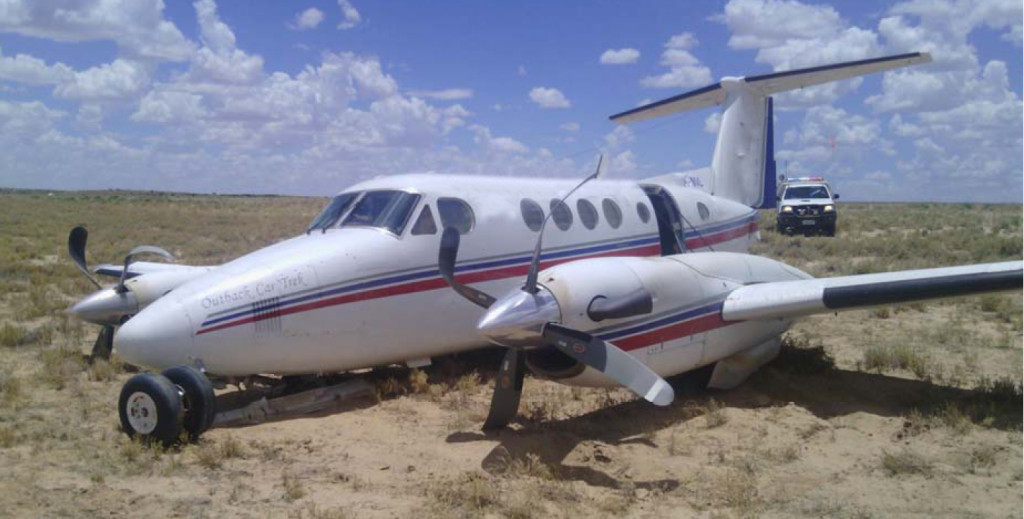 As the aircraft turned onto the base leg of the approach, the pilot observed the left engine fire warning activate. 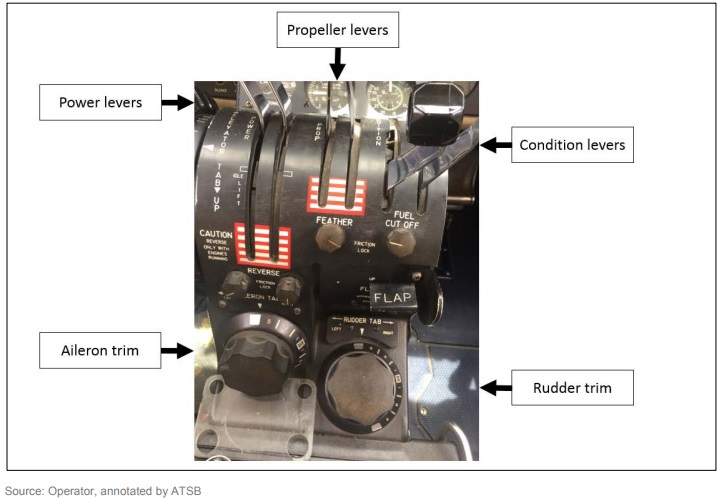 The [pilot] pulled the [left engine] condition lever, then paused, then closed the firewall shutoff valve and pressed the extinguisher and confirmed it had discharged, all from memory, but there was no time to reference the checklist during the approach.

The propeller feathering (i.e. to rotate the blades to an edge-on angle to the airflow) was omitted, so the left hand propeller was windmilling, and thus producing drag.  The sole pilot commenced a right turn towards the runway.

The aircraft landed in the sand to the left of the runway threshold and after a short ground roll, spun to the left and came to rest. There were no injuries and the aircraft was substantially damaged.

A windmilling propeller can produce a significant amount of drag, which is estimated to be comparable to a parachute canopy of the same area as the propeller disc area. 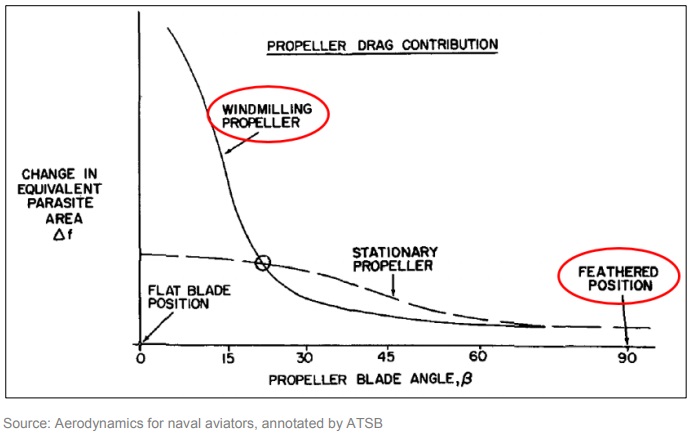 In addition, the aircraft was in a right turn, towards the engine developing power, with the landing gear extended and the flaps set to approach. This combination resulted in more thrust being required for continued safe flight than was available. 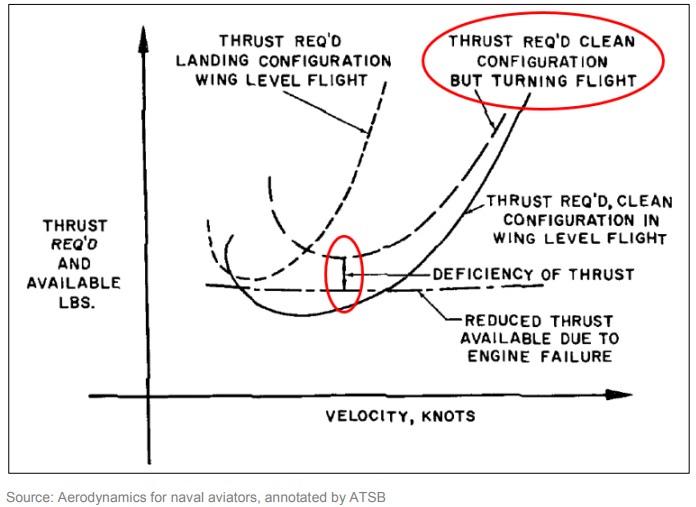 The pilot reported that they hesitated in their decision-making and subsequent engine fire drill actions because of their uncertainty in the veracity of the indication and their proximity to landing.

At the time of the master warning, they had just started the base turn on approach to land, which required their attention to be divided between the cockpit settings and indications, and the external cues for the visual approach.  It is possible that divided attention, combined with their hesitation…contributed to them omitting the step to feather the propeller in their immediate actions.

…did not attempt to feather the propeller at any stage during the approach. This indicates that the pilot did not recognise that their asymmetric handling difficulties were the result of a windmilling propeller….

The pilot’s training and assessment reports indicated that their asymmetric flight experience on the B200 extensively involved engine failures on take-off and engine fires in cruise.

The simulator field of view for the pilot is less than what is available in the aircraft. [Hence] the operator assessed it as inappropriate to initiate emergencies in the simulator from a circuit base leg position. Therefore critical situation emergencies, such as an engine fire indication on approach, were generally initiated on the final approach of an instrument approach.

An autofeather system will feather the propeller of a failed engine during take-off. In cruise, the propeller must be manually feathered by the pilot..

The ATSB also note that:

The accident pilot did not receive the operator’s published syllabus of training for the B200 King Air. Instead, a tailored training program was delivered in consideration of the pilot’s experience on the C90 King Air with another operator and advice the operator received from the Civil Aviation Safety Authority. This training did not cover all the elements required under the Civil Aviation Safety Regulations.

No engine fire damage was found and it was therefore concluded that the observed fire warning was almost certainly a false warning.

The pilot commented that they were aware that the fire detection system was susceptible to false indications due to sunlight entering the engine compartment, but had not previously experienced such an incident.

The RFDS acquired VH-MVL in 1997 and it had no prior history of false fire warnings.  They did have had four previous reports of false in-flight engine fire warnings recorded in the rest of their KA200 fleet:

…the optical fire detection system fitted to the aircraft was susceptible to false indications.  In 1995, Beechcraft issued a service bulletin (SB 2596) for a continuous loop fire and overheat detection system to ‘improve reliability and maintainability.’

In July 2003, after the first three reports of false engine fire indications, the RFDS reviewed the SB “but elected not to incorporate the modification”.  Ten years later, on 10 April 2013, the Australian aviation regulator CASA issued an airworthiness bulletin (AWB 26-005) that “strongly recommended” installation of SB 2596 (but CASA did not choose to make the SB mandatory).  The operator again considered the SB but elected not to embody it.  Both operator reviews made no reference to the risk posed by false engine fire indications, however…

…the operator’s previous false engine fire warning [safety] reports recorded them as low risk and their last report was in 2005.

The earliest safety management manual the operator was able to provide the investigation was dated 2006….therefore the operator’s risk assessment process, as it applied to the earlier false engine fire warnings and review of SB 2596 was not investigated any further.

…that the incorporation of the manufacturer’s modification would have reduced the risk of a false fire warning occurring.

Other factors that increased risk

The comprehensive planned RFDS actions are to:

CASA intends to take steps to refresh industry and CASA officers of particular terms and concepts within the CASR 1998 flight crew licensing suite to remove any doubt that might exist as to their interpretation and applicability. For example, terms such as differences training, flight review, competency, competency-based-training, recognition of prior learning, qualifications and experience will be clarified.

Following the accident, the pilot reported that their biggest lesson was not to hesitate during emergency procedures. They believed that their doubt in the veracity of the warning resulted in their hesitation while completing the four engine fire drill (memory) actions, resulting in them missing the step to feather the propeller.

This accident also highlights the need for organisations to consider all the relevant information available to them when making decisions, such as the process for reviewing non‑mandatory service bulletins. Organisational decision-making should consider the potential consequences of human error when evaluating changes.

Aerossurance is pleased to be supporting the annual Chartered Institute of Ergonomics & Human Factors’ (CIEHF) Human Factors in Aviation Safety Conference for the third year running.  We will be presenting for the second year running too!  This year the conference takes place 13 to 14 November 2017 at the Hilton London Gatwick Airport, UK with the theme: How do we improve human performance in today’s aviation business?