Cockpit confusion, a rushed approach, procedural deviations and a design flaw featured in a fatal turboprop LOC-I accident in Luxembourg in 2002. 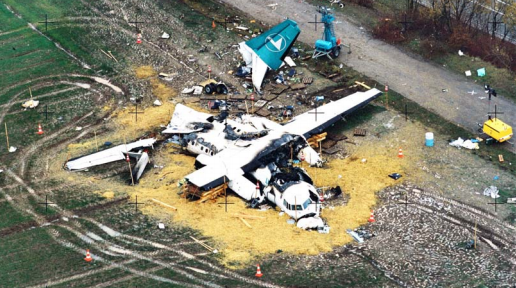 Fokker 50 LX-LGB of Luxair was operating a Berlin to Luxembourg flight on 6 November 2002 with 22 persons on board.

According to the revised accident investigation report of the Luxembourg Ministry of Transport released in 2009 (and its appendicies), the aircraft had been in a hold at 8 h 52 min 49s, the crew were instructed to enter the holding pattern.  After 6 minutes they were cleared to descend.  There was some doubt if the Runway Visual Range (RVR) would meet company minima. 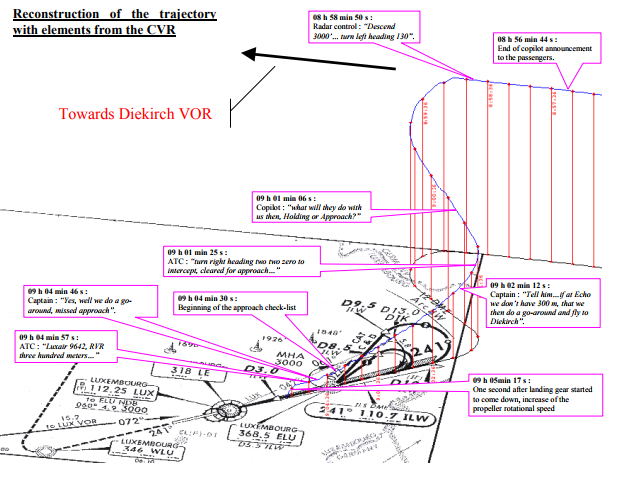 At 9 h 04 min 30 s, the co-pilot started the BEFORE APPROACH checklist but without announcing it.  In contrast at 9 h 4 min 46 s, the Captain announced he intended to go-around after passing the final approach point nut the co-pilot did not react and continued with the checklist.  Eleven seconds later however ATC transmitted the latest RVR, which was 300 m.  The accident investigators comment:

This RVR value, which corresponded exactly to the required landing minima, triggered a sudden reversal of the captain’s decision, who then obviously chose to resume the approach without announcing it. This was abnormal, since no procedure exists to capture the glide slope from above after having passed the final approach point.

The captain, without saying anything, brought the power levers to flight idle and at the same time pulled the ground range selectors in order to be able to bring the power levers slightly further backwards into a position that corresponds to a setting below flight idle. This information is confirmed by the value of the Left and Right HP turbine RPM parameters, which were below the flight idle minimum and by the identified relevant noises on the CVR. This action was prohibited in flight.

Since there was [a] secondary stop provided by the solenoids on the engines, the pilot would feel a hard stop of the power levers.

The accident investigators comment that intercepting the glideslope from above:

…meant descending rapidly and consequently increasing the speed, which was still relatively high. So the captain used a personal solution to resolve this contradiction. Using a propeller pitch selection below flight idle would decrease the power and could help to descend without increasing the speed. The investigation has shown that it actually did not improve the rate of deceleration.

Considering that the captain reduced power and entered the beta range in the same movement indicates that it was a deliberate action.

The crew had been deviating so much from standard operating procedures that a certain confusion prevailed in the cockpit.

Power was…reduced, flaps 10 were selected and the landing gear was lowered.

Lowering the gear most likely energised the flight idle stop solenoid relay through the antiskid box and removed the secondary stop (discussed further below).

The captain…may not have felt the absence of the secondary stop and with the hand pressure applied to the power levers he may have unintentionally passed through the ground idle position (a double click on the CVR can be attributed to this event), towards full reverse.

Immediately after the landing gear was lowered, the pitch angle of the two propellers simultaneously reached a value that is lower than the minimum values for flight. This propeller pitch setting brought a rapid decrease of speed and altitude. 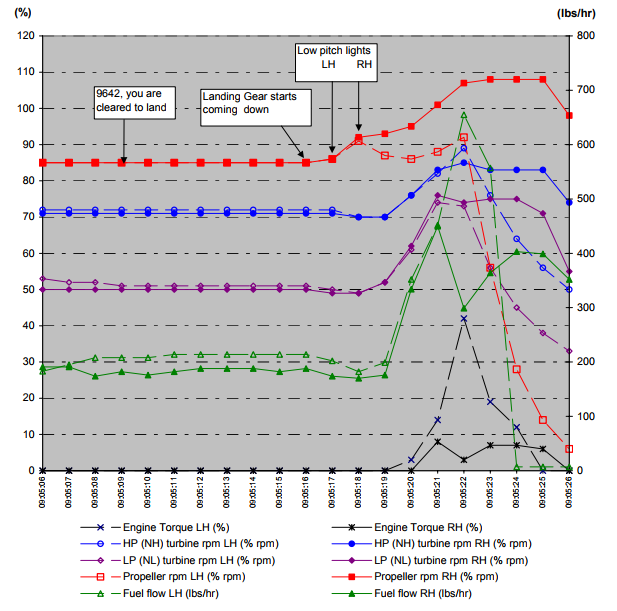 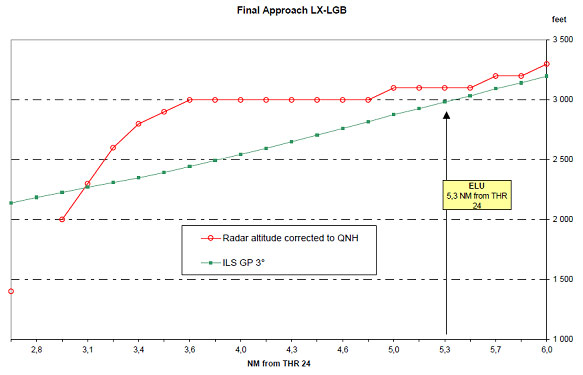 At 9 h 05 min 42 s (radar time base), the aircraft disappeared from the radar screen. It was immediately found in a field 700 m to the north of runway centreline 24 and 3.5 km to the east of the threshold.

The aircraft was destroyed.  There were 20 fatalities and 2 serious injuries. 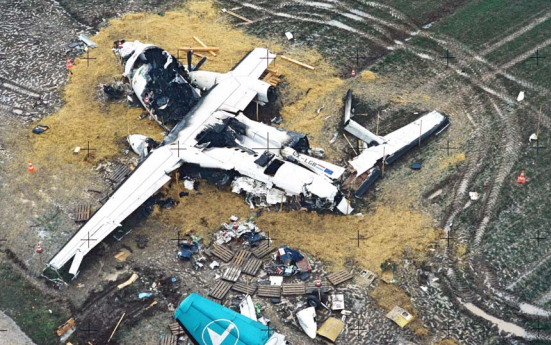 In their initial report in 2003 the accident investigators said that “numerous operational deficiencies” were identified:

Violations of rules and regulations

Lack of cooperation between crew members

In their 2009 report the accident investigators say:

A number of standard operational procedures were not applied because of the sudden increase in workload brought by the execution of the direct approach although the crew was set to enter DIK hold. Consequently, there was no approach preparation, nor briefing, which meant amongst other that the crew did not express which type of approach would be performed. In any case, had this RVR of 300 m been available at that moment in time, the only available operational issue would have been to execute a CAT II approach. The task sharing corresponding to CAT II approach was however not applied. This might have influenced the crew performance.

The abovementioned events testify a lack of method and professionalism of the crew in handling this unexpected situation. One obvious reaction could have been to refuse the approach sequence. The combination of routine and the will to arrive at destination (“get home itis”) favoured the decision of the crew to accept the approach clearance, although they were not prepared to it. At this precise point the chain of events started to build up which ultimately led to successive uncoordinated decisions and actions by the crewmembers.

The additional pressure which accompanied the priority given to them on the other aircraft, combined with this will to do the approach, may partially explain the interception of the glide from above and the positioning of the power levers below flight idle. 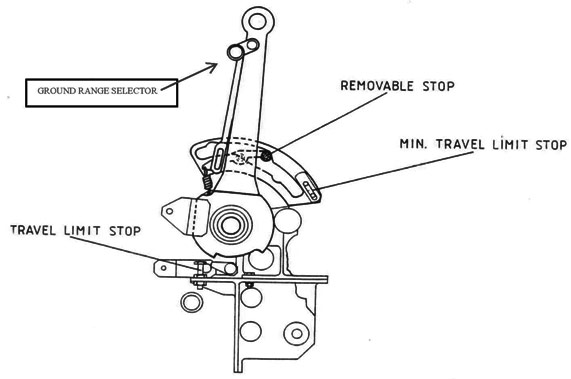 In flight, power lever positions below flight idle are prevented by two means:

According to a FAA lessons learnt case study:

There had been at least 11 fatal accidents dating as far back as 1951 related to propeller low pitch or reverse pitch settings in flight. One of these accidents involved a Fokker F27 Mk 200, which was type certificated 24 years before the Mk 050. There was also substantial in-service experience, as early as 1988, which identified EMI effects on the Fokker F27 Mk 050 antiskid system and the removal of the secondary pitch stops during landing gear extension. A Fokker service bulletin to correct this anomaly was issued in 1992. 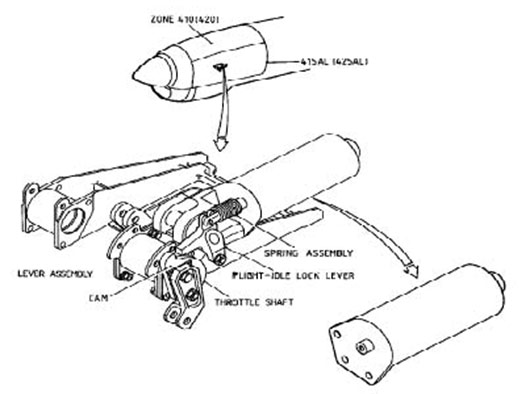 The design of the secondary stop…

…does not prevent the intentional or unintentional removal of the primary stop by the pilot, meaning that the safety function of the first device is not guaranteed. The primary and the secondary stop system…was certified against JAR25.1155 (change 9).

…some questions remain regarding the reliability of the system.

By Fokker Aircraft B.V. Service Letter n°137 issued in 1994, the operators were informed about the possible scenarios leading to the deactivation of the secondary stop. Fokker Aircraft B.V. required no corrective action because they considered this occurrence was remote; however Fokker Aircraft B.V. indicated in the same letter that it could happen during each flight when the landing gear is selected down. These two statements seem to be non coherent and some questions remain regarding the reliability of the system.

The aim of the secondary device is to be an ultimate backup to avoid a catastrophic situation. The philosophy of this concept implies that the backup must be reliable. Despite the presence of two different safety devices serving one single purpose, their intended design purpose is not fulfilled.

[A later] version…issued in May 2003 (change 16), introduces this notion of “a means to prevent both inadvertent or intentional selection or activation of propeller pitch setting below the flight regime” [and]  “a reliability such as the loss of the safety devices is remote”.

Additionally, in relation to the AntiSkid Control System:

Modifications to the antiskid control unit published in Aug 1992 through Service Bulletin N° Fo50-32-4…   In June 1994, a revision N°1 of Service Bulletin N° Fo50-32-4, was issued. The recommended modifications were still the same and revision concerned only the reason of the service bulletin which was now indicated as preventing a condition during power up of the skid control box whereby a signal pulse is inadvertently sent to the ground control relay thus affecting the flight idle stop solenoids (secondary stop).

This non-mandatory SB was not incorporated on the accident aircraft.  The investigation report does not explain why.

More can be found on the design in an online FAA lessons learnt case study.  Several Airworthiness Directives were issued.

…7. RVR was below approved company minima during the initial and the intermediate approach,

8. During the approach, the crew did not comply with the operator’s procedures,

10. The captain resumed the final approach after having announced a go-around, without co-pilot’s reaction,

11. In order to achieve this goal, the crew performed several non-standard actions, amongst which the prohibited positioning of the power levers beyond flight idle. The AFM contained a limitation that prohibits the selection of ground idle in flight.

12. The selection of the landing gear down, triggered the deactivation of the second safety device (solenoid secondary stops) which was a possible malfunction identified by the manufacturer.…

The initial cause of the accident was the acceptance by the crew of the approach clearance although they were not prepared to it, namely the absence of preparation of a go-around. It led the crew to perform a series of improvised actions that ended in the prohibited override of the primary stop on the power levers.

1. A lack of preparation for the landing, initiated by unnecessary occupations resulting from an obtained RVR value, which was below their company approved minima, created a disorganisation in the cockpit, leading to uncoordinated actions by each crewmember.

2. All applicable procedures as laid down in the operations manual were violated at some stage of the approach. All this did not directly cause the accident, but created an environment whereby privately designed actions were initiated to make a landing possible.

3. Routine and the will to arrive at its destination may have put the crew in a psychological state of mind, which could be the origin of the deviations from standard procedures as noticed.

4. The low reliability of the installed secondary stop safety device that was favoured by the non-application of service bulletin ABSC SB F050-32-4. Also the mode of distribution of the safety information (Fokker Aircraft B.V. – Service letter137) to the operator as well as the operator’s internal distribution to the crews, that did not guarantee that the crews were aware of the potential loss of secondary stop on propeller pitch control.

5. The lack of harmony resulting from the use of various training centres and non-standardised programs that might have impaired the synergy of the crew.”

6. Latent shortcomings in the Authority and the organisational structure of the operator, in combination with poor application of SOPs by the crew. [not in the 2003 report]

On 10 February 2004 Kish Air Fokker 50 EP-LCA crashed on approach to Sharjah, killing 43 out of 46 occupants in a similar accident.  The accident investigators concluded that:

Cause: The power levers were moved by a pilot from the flight idle position into the ground control range, which led to an irreversible loss of flight control.
Contributory Causes:
1. By suddenly insisting the First Officer fly the final approach, the pilot in command created an environment, which led to a breakdown of crew resource management processes, the non observance of the operator’s standard operating procedures and a resultant excessive high approach speed.
2. An attempt to rectify this excessive high approach speed most likely resulted in the non compliance with the Standard Operating Procedures and the movement of the power levers below flight idle.
3. The unmodified version of the Skid Control Unit failed to provide adequate protection at the time of the event.

Aerossurance is also pleased to be supporting the annual Chartered Institute of Ergonomics & Human Factors’ (CIEHF) Human Factors in Aviation Safety Conference for the third year running.  We will be presenting for the second year running too, this time on the subject of the FSF‘s Maintenance Observation Program, safety performance requirement.