Misfuelling aircraft with kerosene based Jet A-1 rather than Aviation Gasoline (AVGAS) continues to be a source of accidents.

The Canadian Transportation Safety Board (TSB) has recently released an update on the 15 September 2015 accident involving twin engined Keystone Air Service Piper PA31-350 Navajo C-FXLO at Thompson, Manitoba.  Shortly after takeoff the aircraft experienced a malfunction and the crew attempted to land back at Thompson. The aircraft impacted terrain less than 1 nautical mile from the airport. All 8 persons on board survived. 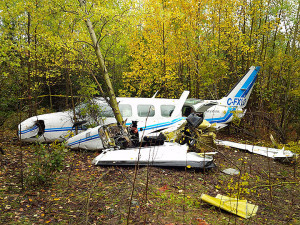 The ongoing investigation has confirmed that the aircraft received an incorrect type of fuel in Thompson, Manitoba, prior to departing for Winnipeg. The twin piston-engine aircraft requires aviation gasoline (AvGas), but was re-fueled with turbine engine fuel (Jet A1). The aircraft was destroyed by impact with trees and terrain; however, the aircraft cabin section remained largely intact. Almost all of the fuel was dispersed throughout the crash site from ruptured fuel cells but a sufficient quantity remained to obtain samples. There was no post-impact fire.

The occupants sustained varying serious injuries but were able to assist each other and exit the aircraft.

UPDATE 10 November 2015: Transport Canada has now suspended the operator’s AOC (for a third time since 2002). UPDATE 8 September 2016: The TSB release their report.

The aircraft commander had intended to relay the fuel requirements to the technician, but the Co-Pilot, who was escorting passengers, had noticed that the fuel technician was having trouble with the  fuel filler openings. The Co-Pilot assisted the technician and asked for required fuel.  The Captain overhead this conversation and so did not talk to the refueller.

Neither pilot noticed that the truck was a jet fuel truck. The technician did not spot the aircraft placard specifying aviation gasoline. Prior to departure, the Captain returned to the fuel providers office to collect the fuel slip but it was unoccupied  The crew then performed an abbreviated check before taking off.

The [fuel technician’s] training consisted of reading the Imperial training material, viewing the CDs, and completing the corresponding multiple-choice quizzes. Additional certifications, such as Airside Vehicle Operator’s Permit and Transportation of Dangerous Goods, were administered by the manager at Mara-Tech’s Thompson facility.

The US National Transportation Safety Board (NTSB) is investigating a 22 February 2015 fatal accident involving single engined Piper PA46-350P Malibu Mirage C-GVZW in Spokane, Washington state. The aircraft was destroyed and the pilot killed, during the attempted emergency landing when it struck a railroad track.  In their preliminary report the NTSB say:

In their report on the PA-31 accident the TSB comment:

Total have issued a useful guide on avoiding errors in fuelling.  It includes a number of deliberate steps to trap any human errors or misunderstandings consistent with our past article: Professor James Reason’s 12 Principles of Error Management Some airfield fuel suppliers, such as at Lydd in Kent, refuse to supply fuel unless a clear fuel type decal is displayed. Anecdotally ‘turbo’ markings on aircraft (indicating turbo-charged piston engines) have been mistaken in the past as indicating gas turbine engines.

UPDATE 29 March 2016: The NTSB have issued safety alerts on fuelling, one for pilots and the other for refuellers.