On 29 March 2019 the No 1 General Electric GEnx-1B engine of Jetstar Airways Boeing 787-8 VH-VKJ, flying from Cairns, Australia to Osaka Kansai International, Japan, fell below idle during the descent at an altitude of about 16,000 ft for 8 seconds. The No 2 engine then fell below idle too for 81 seconds. The aircraft safely landed at Kansai International less than 30 minutes later. 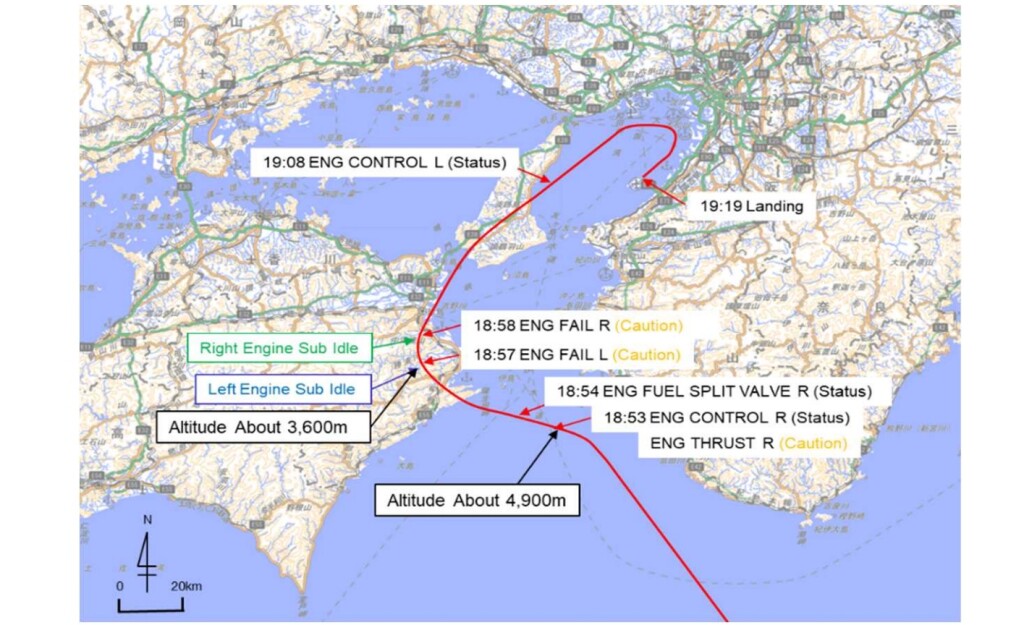 The Japan Transport Safety Board (JTSB) explain in their safety investigation report (issued 25 June 2020) that engine rpm oscillations had been recorded during the incident. 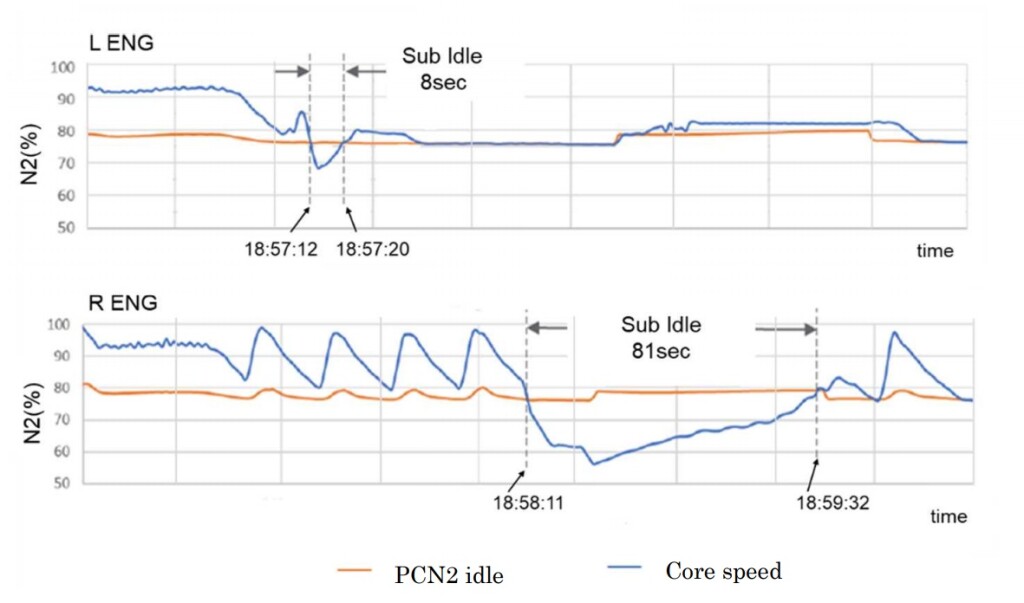 Testing showed that up to 320 times more force was needed to move the control servos with the residue.

The JTSB therefore concluded that when fuel pressure was low when descending at flight idle, “the FMV spool and FSV spool had restricted freedom of movement” and that the engines had dropped below idle due to the FSV sticking.

It is probable that biocide treatment inside fuel tanks conducted two days before the serious incident was involved in the accumulation of [the] residue…because the composition of the residue were similar to the Kathon FP1.5.

Biocide treatment is used to prevent microbial growth that can cause corrosion and damage fuel and engine systems.

The Aircraft [had been] ferried to Auckland International Airport, New Zealand to borrow facilities of other company to conduct biocide treatment inside all three fuel tanks (left, center and right) because the Operator did not have their own facilities.

The certifying staff involved had not recorded details of the biocide quantity added.  JTSB comment that “It is desirable to keep these records because they are considered to be important for traceability of maintenance work.”.  JTSB determines that the actual concentration was 250 ppm in the left tank and about 285 ppm in the right tank.  There was fuel at a lower dosage in the centre tank but it appears that mixing if biocide through the fuel system was not sufficient;y rapid to ensure the outer tanks were diluted.

In this serious incident, it is highly probable that, when the Aircraft was descending for landing, there occurred oscillation in rpm of each engine causing both engines to temporarily fall below idle at separate times because residue primarily composed of magnesium salts accumulated in spools impeded movement of spools that involved in fuel metering of both engines. As for the higher accumulation of residue primarily composed magnesium salts in spools, it is somewhat likely that the fuel with a higher concentration ratio of biocide, which was loaded in the biocide treatment two days before the serious incident, did not mix evenly with the remaining fuel in wing tanks, and was fed to the engines.

(1) The Operator suspended biocide treatment using Kathon FP1.5 inside fuel tanks of the same type of aircraft. The Operator is reviewing maintenance procedures that occur infrequently, to identify task- specific training opportunities for maintenance personnel based on AMM.

(3) Boeing deleted biocide treatment procedures using Kathon FP1.5 from the AMM of the same type of aircraft equipped with GEnx engine following SB issued by the design and manufacturer of the engine. The design and manufacturer of the aircraft also updated the AMM for all models of aircraft to explicitly describe the maximum allowable biocide concentration ratio and to record calculation of biocide amount and the amount used.

The UK Air Accidents Investigation Branch (AAIB) has published a Special Bulletin concerning a serious incident involving an Airbus A321 G-POWN of Titan Airways on 26 February 2020.  The aircraft…

…suffered problems with both engines shortly after take-off from London Gatwick Airport on a positioning flight to Stansted Airport with seven crew members and no passengers on board. The aircraft returned for an immediate landing at Gatwick, which was completed successfully.

The investigation has determined that during biocidal shock treatment to combat microbial contamination, an excessive quantity of Kathon biocide was introduced into the aircraft’s wing fuel tanks, equating to 37 times the maximum permitted dosage. This Special Bulletin contains preliminary information about the investigation and is intended to highlight the importance of using correct procedures when dosing fuel with biocide.