On 12 May 2019 Myanmar National Airlines Embraer 190 XY-AGQ suffered damage to its forward fuselage during the landing in Mandalay, on a flight from Yangon, after the Nose Landing Gear (NLG) failed to extend.

The 89 occupants were unharmed.  A maintenance error narrative was accepted without question by the technical press.  We aren’t convinced!  https://youtu.be/Jl5xXzj8n64

The Aircraft Accident Investigation Bureau of Myanmar (AAIBM) issued their safety investigation report on 16 June 2020 (after just 13 months).  They explain that analysis of the Flight Data Recorder (FDR), and the weight-off-wheels switch signal in particular, showed that as the NLG retracted the shock strut had compressed enough to disengage a self-centring cam which keeps the nose wheels central as the NLG enters the bay.  The nose wheels turned and became offset by about 20°.  Any more that 8° offset means the wheels will jam when the NLG is lowered, which is what happened.  On 23 previous flights the weight-off-wheels switch signal had also changed from ‘WOffW=True’ to ‘WOffW=False’ during the retraction.  The investigators concluded that a similar event could have occurred on those flights.

The aircraft had previously undergone fault-finding to try to rectify a failure message relating to the weight-on-wheels system, first observed on 8 May 2019. The engineer involved stated that the aircraft had…

The engineer said that the maintenance action performed was cleaning the Nose Landing Gear sensors, connector and targets according to Fault Isolation Manual (FIM) (32-61-00-810-890-A00). After that he checked CMC [Central Mainteance Computer] of the aircraft, that there were no WOW SYS fault messages active.

The aircraft was put back into service that day but on 11 May 2020, the crew felt the NLG vibrating during take-off and gear retraction.  They recorded in the Technical Log records that “Nose Wheel Tension is Stronger than Normal During Take off and Landing Rolling”.  Maintenance was performed that night, with the engineer stating that the task performed…

…was the Nose Landing Gear shock Strut N2 Chamber Servicing, according to Aircraft Maintenance Manual (AMM) 12-12-09-600-804-A. He also stated this condition, was not included in FIM. Therefore, he decided on the appropriate maintenance action for this fault based on his experience. After that he checked the Dimension H of sliding tube of Nose Landing Gear based on the temperature 30ºC , it was within limit in the graph of (AMM) 12-12-09-600- 804-A.

The accident occurred on the next flight. 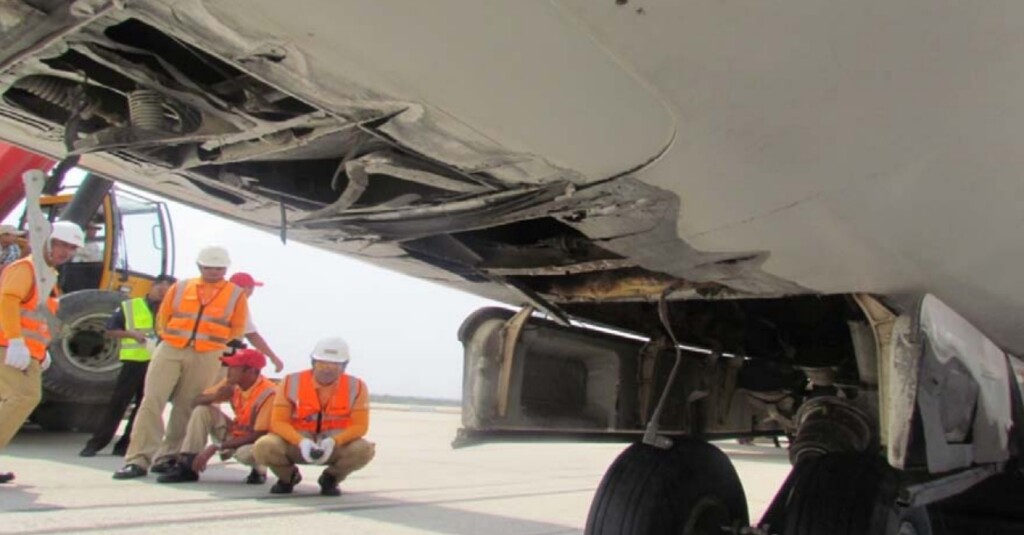 Maintenance actions were not properly done as per the fault isolation manual in rectifying the intermittent Weight off Wheels System Fail fault and in addition, poor workmanship in performing the Nose Landing Gear Strut N2 servicing.

Our Observations and Warnings on WYLFIWYF and the FFP Fallacy

However, disappointingly, the investigators actually provided no evidence for their conclusions! They identify no omission or error by the first engineer.  They don’t comment on the dilemma the second engineer faced, namely the absence from the FIM of the oddly phrased problem reported nor do the investigators assess the adequacy of the maintenance instructions in general.  The investigators also do not identify why the N2 Chamber servicing was either incorrect or, indeed if correct, may have contributed to the jam on the 24th flight.  There are also no details of the inspection of the NLG.

The investigators may have fallen for the trap of looking for maintenance errors, as What You Look For is What You Find (WYLFIWYF). In other words concluding that as maintenance is meant to prevent failures, the outcome proves the maintenance was flawed, without needing to connect any actions or omissions with the outcome. Alternatively they may have made the assumption that the FIM and AMM were perfect and that any resulting failures are simply due to poor performance of the tasks. This is the most extreme variant of what we call the Failure to Follow Procedures Fallacy (FFP Fallacy), which can also feature when investigators assume any deviation from procedures must be significant and causal, without determining if the procedure was even appropriate.
We realise AAIBM is not a large and well funded safety investigation body and that, to their credit, they still managed to complete and publish their report over 10 times faster than a recently issued report on another regional jet landing gear jam: CRJ-200 Landing Incident Highlighted US Maintenance Competency Inadequacies! Indeed, they may have evidence to back up their conclusions and simply erred themselves by not documenting it (investigators are human too!).
However, it’s a reminder to air operators and maintenance organisations of the importance of completing their own internal safety reports by going through the stages of 1) gathering the facts, 2) analysing the facts, 3) drawing conclusions and 4) recommending actions. If each step is not supported by the former steps, the actions taken may well not prevent future actions and may well unfairly penalise individuals.
WYLFIWYF is especially prone to occur in safety department investigations when:

In turn, such investigations can also fall for the FFP Fallacy too.  We’ve also seem statistical studies that have misleadingly classified any procedural issue as FFP.

Aerossurance’s experienced investigators can help coach your investigation team, so they don’t make the mistake WYLFIWYF and or fall for the FFP Fallacy.