Misfuelling aircraft with kerosene based Jet A-1 rather than Aviation Gasoline (AVGAS) continues to be a source of accidents.  We look at three: Shortly after rotation, both engines began to lose power. The crew attempted to return to the airport, but the aircraft was unable to maintain altitude. The landing gear was extended in preparation for a forced landing on a highway southwest of the airport. Due to oncoming traffic, the forced landing was conducted in a forested area adjacent to the highway, approximately 700 metres south of the threshold of Runway 06.

The descent angle through the trees to the impact point of the main landing gear was about a 10° descent angle in a nose-high, wings-level attitude. From the initial impact point, the aircraft travelled another 30 m before coming to a stop. The total length of the wreckage trail from the first tree impact was approximately 76 m.

The [8] occupants sustained varying serious injuries but were able to assist each other and exit the aircraft.

The aircraft commander had intended to relay the fuel requirements to the technician, but the Co-Pilot, who was escorting passengers, had noticed that the fuel technician was having trouble with the  fuel filler openings. The Co-Pilot assisted the technician and asked for required fuel quantity.  The Captain overhead this conversation and so did not talk to the refueller.

Neither pilot noticed that the truck was a jet fuel truck.

The technician did not spot the aircraft placard specifying aviation gasoline. Prior to departure, the Captain returned to the fuel providers office to collect the fuel slip but it was unoccupied  The crew then performed an abbreviated check before taking off without the fuel slip.  TSB say:

The [fuel technician’s] training consisted of reading the Imperial training material, viewing the CDs, and completing the corresponding multiple-choice quizzes. Additional certifications, such as Airside Vehicle Operator’s Permit and Transportation of Dangerous Goods, were administered by the manager at Mara-Tech’s Thompson facility.

Several factors likely allowed the fuelling error to go undetected in this occurrence. They included time pressure, the flight crew’s trust in the fuel dealer that was based on previous experience, and the direction of their attention to other work-related tasks at the time of the fuelling. These factors likely resulted in the inattentional blindness that crew members experienced toward the fuel truck signage that might have alerted them to the error in fuel type.

The flight crew had developed certain levels of trust in various aerodrome fuel dealers that extended to those dealers’ individual [technician].

The [fuel technician] was required to present a fuel order form on which the crew would specify the fuel type and amount required. However, this form was almost never used by the fuel dealer’s employees.

When the crew started the engines, the AVGAS remaining in the fuel lines and fuel filter bowls was being consumed. The expedited taxi to the runway meant that the aircraft was airborne before the fuel mixture, consisting of approximately 32% AVGAS and 68% Jet-A1, reached the engines. Given that the fuel mixture was present in all 4 fuel tanks, attempts to restore engine power by selecting another fuel tank would have been unsuccessful.

TSB make no comment on any actions by the refuelling company.

The US National Transportation Safety Board (NTSB) is investigating a 22 February 2015 fatal accident involving single engined Piper PA46-350P Malibu Mirage C-GVZW in Spokane, Washington state. The aircraft was destroyed and the pilot killed, during the attempted emergency landing when it struck a railroad track.

UPDATE 6 September 2017: In their report the NTSB say:

The pilot was conducting a cross-country flight from Canada to California and had landed to clear customs into the United States and to refuel his airplane.

During the initial climb after takeoff, the engine experienced a total loss of power, and the pilot attempted to make an off-airport forced landing. The right wing struck railroad tracks at the top of a hill, and the airplane continued down an embankment, where it came to rest adjacent to the bottom of a railroad bridge. 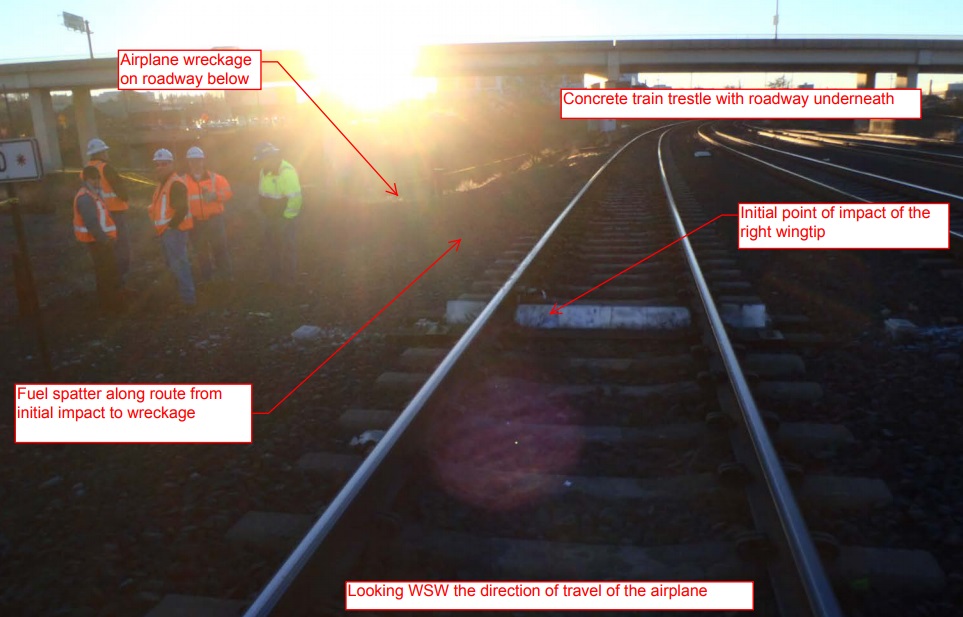 Postaccident interviews revealed that, when requesting fuel from the fixed-base operator (FBO), the pilot did not specify a grade of fuel to be used to service the airplane. The refueler mistakenly identified the airplane as requiring Jet A fuel, even though the fuel filler ports were placarded “AVGAS (aviation gasoline) ONLY.” 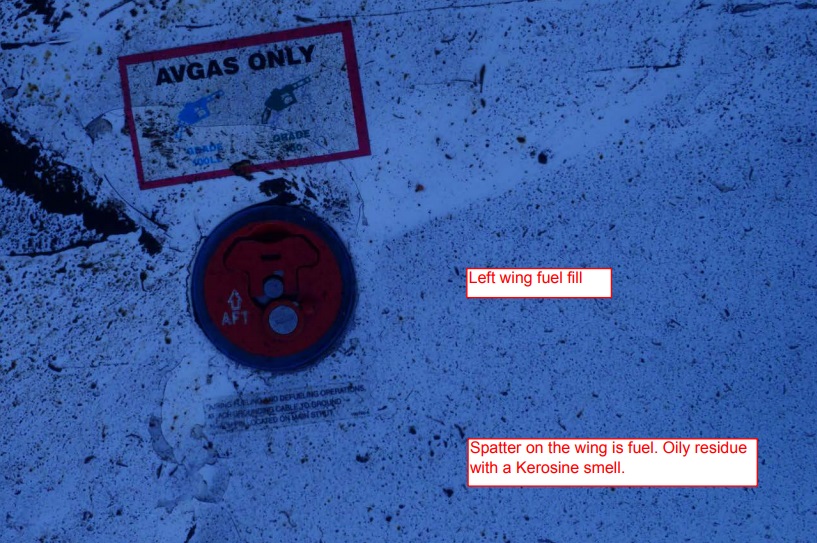 The fueler subsequently fueled the airplane with Jet A instead of aviation gasoline. Additionally, the fueling nozzle installed on the fuel truck at the time of the refueling was not the proper type of nozzle. Jet A and AvGas fueling nozzles are different designs in order to prevent fueling an airplane with the wrong type of fuel.

Following the fueling, the pilot returned to the FBO and signed a receipt, which indicated that the airplane had been serviced with Jet A.

However it is not in itself a strong indicator (red arrow added). 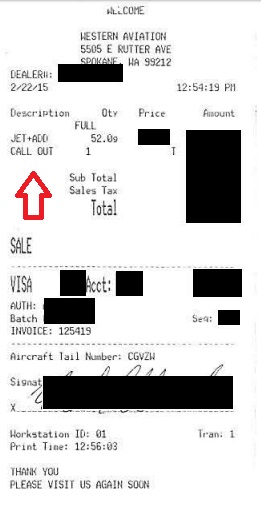 There were no witnesses to the pilot’s preflight activities, and it is unknown if the pilot visually inspected or obtained a fuel sample before takeoff; however, had the pilot done this, it would have been apparent that the airplane had been improperly fueled.

A total loss of engine power due to the refueler’s incorrect refueling of the airplane.

Contributing to the accident was the fixed-base operator’s improper fueling nozzle, which facilitated the use of an incorrect fuel, and the pilot’s inadequate preflight inspection 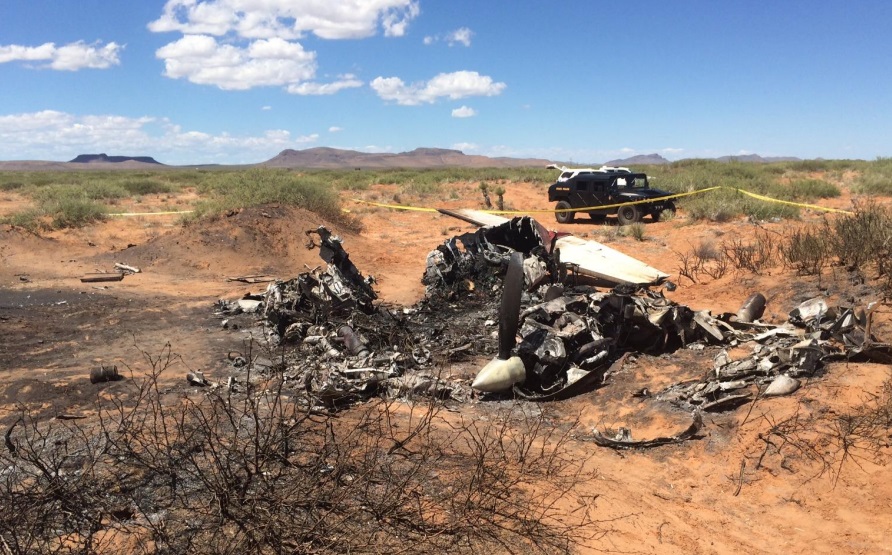 The airplane arrived LRU about 1834 to pickup a patient for a flight to PHX.

Shortly after takeoff, a medical crewmember called the company medical dispatcher and reported that they were returning to the airport because smoke was coming from the right engine.

The aircraft subsequently impacted the ground.

A postimpact fire immediately ensued and consumed most of the airplane. Investigators who arrived at the scene the day following the accident reported clearly detecting the smell of jet fuel. 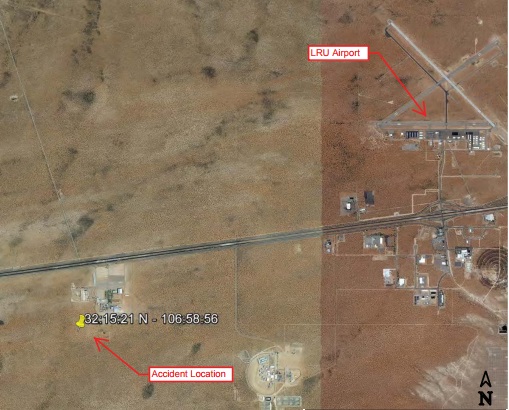 The airplane, which was equipped with two reciprocating engines, should have been serviced with aviation gasoline, and this was noted on labels near the fuel filler ports, which stated “AVGAS ONLY.”

It was the joint responsibility of the line technician and pilot to ensure that the airplane was filled with aviation fuel instead of jet fuel and their failure to do so led to the detonation in the engine and the subsequent loss of power during initial climb.

In accordance with voluntary industry standards, the FBO’s jet fuel truck should have been equipped with an oversized fuel nozzle; instead, it was equipped with a smaller diameter nozzle, which allowed the nozzle to be inserted into the smaller fuel filler ports on airplanes that used aviation gasoline. The FBO’s use of a small nozzle allowed it to be inserted in the accident airplane’s filler port and for jet fuel to be inadvertently added to the airplane.

The misfueling of the airplane with jet fuel instead of the required aviation fuel, and the resultant detonation and a total loss of engine power during initial climb.

Contributing to the accident were the line service technician’s inadvertent misfueling of the airplane, the pilot’s inadequate supervision of the fuel servicing, and the fixed-base operator’s use of a small fuel nozzle on its jet fuel truck.

Total have issued a useful guide on avoiding errors in fuelling.  It includes a number of deliberate steps to trap any human errors or misunderstandings consistent with our past article: Professor James Reason’s 12 Principles of Error Management

The NTSB have issued safety alerts on fuelling, one for pilots and the other for refuellers. According to one refuelling company there are globally around 250,000 aircraft refuellings every day (100,000 commercial aircraft and 250.000 GA aircraft).  This accident illustrates that the controls, while highly effective, can be breached, especially if there is a degree of confirmation bias.

UPDATE 19 July 2020: Wrong fuel added before crash of Alaska forestry plane that injured pilot and 3 firefighters, NTSB says.  According to the NTSB the fuel truck driver…

…was unfamiliar with the airplane, so he queried the pilot as to where he should attach the grounding strap and the location of the fuel filler port. Before starting to refuel the airplane, he asked the pilot “do you want Prist with your Jet” to which the pilot responded that he did not. After completing the refueling process, he returned to his truck, wrote “Jet A” in the meter readings section of the prepared receipt, and presented it to the pilot for his signature. The pilot signed the receipt and was provided a copy. The fueler stated that he later added “no Prist” to his copy of the receipt.

Unfortunately the aircraft, Aero Commander 500S N909AK is powered by piston engines and should have been filled with AVGAS.  A slightly degraded placard near the fuel port on the top of the wing stated, in part: “FUEL 100/100LL MINIMUM GRADE AVIATION GASOLINE ONLY CAPACITY 159.6 US GALLONS”. 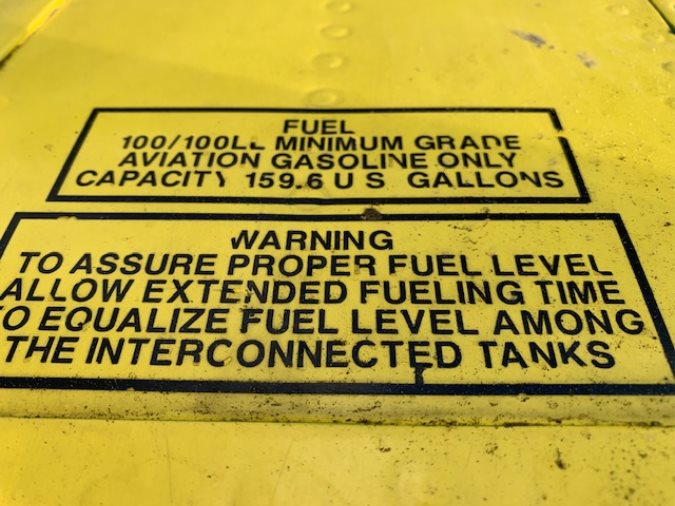 All four occupants were injured when it ditched in a flood gravel pit shortly after take off. 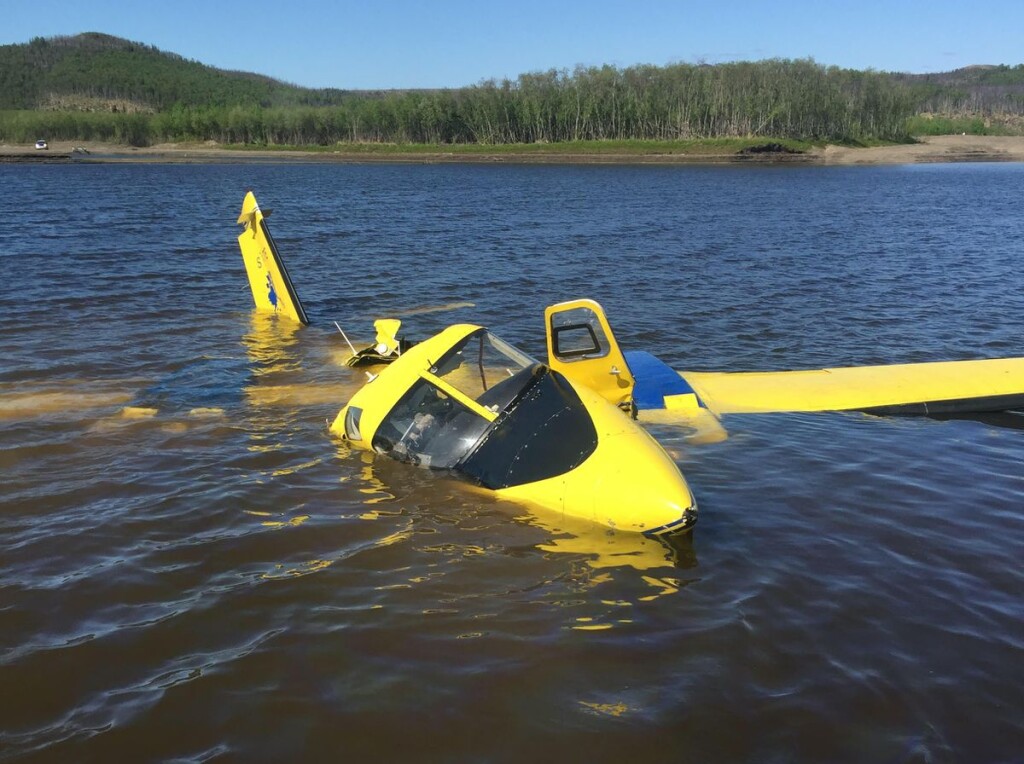