The Papua New Guinea (PNG) Accident Investigation Commission (AIC) has issued a preliminary report into an accident involving Bell 427 P2-HSG operated by Ballina Limited t/a Niugini Helicopters on 11 August 2019.  UPDATE 5 January 2021: They have now issued their final report (updates have been added below). The helicopter was conducting a Visual Flight Rules (VFR) ferry flight from Kokopo, East New Britain Province to Kimbe, West New Britain Province, when it impacted the water, over a reef 3.1 nm NW of Baluma township.  The pilot, the sole person on board, suffered minor injures and was rescued after c 45 minutes with the assistance of local boat owners who had witnessed the accident.  Investigators say that:

After completing a passenger flight from Kimbe to Kokopo, the pilot of the helicopter departed back to Kimbe at 10:02. About 30 nm from Kimbe, the pilot made a radio broadcast [on VHF] reporting that he had commenced his descent from 8,000 ft into Kimbe. The helicopter was estimated to arrive in Kimbe at 11:09. The pilot (a 51-year-old New Zealander with 6549 total fly hours, 346 on type) told investigators that he descended to about 3000 ft and commenced an autorotation exercise “to check the autorotation RPM which had been adjusted by the engineers during an unscheduled maintenance activity the day before”.

The pilot did not consider the position and distance from land when he planned and conducted the autorotation exercise. This was evident because he commenced the autorotation along his normal flight track when the aircraft reached nominated entry altitude 3,000 ft. In accordance with the FAA Advisory Circular(AC) No: 61-140A on Autorotation Training, most recorded autorotation exercise related accidents have been attributed to their recovery phase (transition back to powered flight), at the position, at 1,000 ft, where the pilot attempted his recovery, there was no land close enough for the pilot to land the helicopter in any emergency descent.

The AIC report that:

The pilot reported that everything seemed normal until he commenced action to transition back to powered flight (recover), from simulation at around 1,000 ft, where he received the low rotor RPM warning. He then momentarily glanced at the torque gauge, and recalls sighting an abnormal reading which prompted him to think that one of the helicopter’s engine had failed.

The pilot stated that he immediately lowered the collective and rolled the throttles to idle allowing the helicopter to enter an emergency autorotation descent straight ahead along its planned track.

He immediately activated the company’s third-party tracking system (Spidertracks) ‘SOS’ at about 11:04 LT just before descending through 1000 ft, and broadcast a ‘Mayday’ on the HF radio during the emergency descent, but could not recall the altitude at which he made the call. He added that he did not make another call or pursue a response from Air Traffic Services (ATS) because he was more focused on handling the emergency event.  The alleged Mayday call made by the pilot on HF was not received by ATS. The HF transmissions were convoluted with static interference. 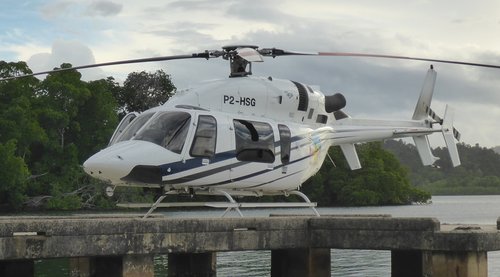 The pilot further stated that at some stage, as he was getting closer to the water, he realised that the engine power was available. However, he concluded that it was already too late to recover and he had also not determined the cause of the warning and abnormal reading. He therefore continued on and ditched the helicopter on the water. It appears the pilot kept the rotors running…

After the helicopter ditched, it continued tracking towards the South West for about 20 minutes before it reached a shallow reef which was reported to be generally less than a meter deep at the time. The pilot tried to lift the helicopter onto the reef, but it spun out of control and impacted the reef then came to rest on its left side.

The tail boom was torn off as it impacted the reef with momentum. The main rotor gearbox separated from its mount…during the impact sequence and lodged itself into the forward lower section where the pilot’s foot pedals were located. This injured the pilot’s right foot.

The pilot managed to climb out of the helicopter during the low tide and wait for rescue. Rescuers arrived on scene about 40 – 45 minutes after the accident and rescued the pilot.

Disappointingly from a flight following perspective:

The Operator stated that they received the ‘SOS’ on their [Spidertracks]  monitoring screen but thought that the pilot had inadvertently pressed the button. They reported that the ‘SOS’ button was sometimes accidently activated in past flights, thus they did not activate an emergency response but rather monitored that helicopter on screen to determine whether it was actually in distress or that it was just a false alarm.

However, in an admirably effective senior management response:

The Operator reported that the CEO who was at home received a ‘SOS’ alert on his phone within 10 minutes of the pilot activating it. He immediately commenced coordination of the rescue operation, in liaison with Kimbe Bay Shipping Agency (KBSA), boarded a fishing boat at the KBSA marina and headed to the accident site.

When ATS receives a COSPAS-SARSAT message, they immediately declare an emergency, and notify relevant authorities to commence search and rescue activities. Although the Distress COSPASSARSAT message was received at 11:26, about a minute after the ELT activated, this message was mishandled and did not get delivered to the Centre Supervisor until 11:45, about 19 minutes after it was received. Upon receipt of the message, the Alert Phase was immediately upgraded to the Distress Phase which was about 19 minutes after the ELT activated.

Despite the relatively rapid rescue, the AIC are also looked at national Search and Rescue provisions.  They note that:

During a previous investigation in 2018, PNGASL [PNG Air Services Limited] air traffic control managers and supervisors informed the AIC investigators that the PNGASL room assigned for the RCC [Rescue Coordination Centre] was not resourced, and the documentation required to efficiently and effectively conduct SAR operations was not up-to-date. The SAR coordination operation was conducted at the Port Moresby ATS Centre Supervisor’s work station.

There was no designated RCC office with equipment and documentation to facilitate the conduct of RCC responsibilities. Air Traffic Services staff did not have that responsibility as a full-time role as required in Annex 12, Paragraph 2.2.3, Standard. The RCC SAR operations did not meet the Standards of ICAO Annex 12.

The 2018 investigation found that funding for the establishment, operation, and maintenance of an Annex 12 Standard RCC was not being provided by the PNG Government although the provision was available in the Civil Aviation Act to the agency conducting RCC duties, to ensure its full functionality and to meet PNG’s international obligations.

The first official RCC coordinator was appointed on the 30th of July 2018 from within PNGASL. The officer did not meet any of the requirements of ICAO Annex 12 (Search and Rescue) to the Convention on International Civil Aviation and the International Aeronautical and Maritime Search and Rescue (IAMSAR) Manual.

This official has however since attended several courses.

Following the Ministers Directive on 9th July 2018, PNGASL commenced amending the [PNG] SAR Manual {last amended in 2000] and it remains in the draft amendment process.  The [PNG] SAR Plan has not been amended since 13th June 2003.

PNG does not have an approval for its RCC (under PNG’s CAR Part 176) but the regulator, PNG CASA, has yet to issue any such an approval and has no qualified SAR inspector according to the AIC’s preliminary report.

Investigators no evidence of any defect or malfunction in the helicopter’s engines.

Although not causal, on the previous maintenance, AIC notes that:

Chapter 18 of the Bell 427 Maintenance Manual outlines three main steps for the completion of the rotor RPM adjustment. Firstly, verify and record the RPM, and specified conditions under which the pre-adjustment RPM verification was conducted. This is specified to be achieved through an autorotation flight check. Then carry out necessary adjustment for target RPM reference to data from the first step and finally, verify the RPM for the adjusted RPM.

The operator only took the second step and then signed the maintenance log releasing the aircraft back to service. The maintenance practices on the day were not completed in accordance with the Bell 427 Manual and [therefore] the Operator did not meet the general requirements of CAR Part 43.

The Chief Pilot was not aware that the pilot was conducting an autorotation exercise on the day of the accident.

The AIC concluded that:

The decision of the pilot to conduct the autorotation RPM check over water, far away from a safe landing area, although not directly casual to the accident, contributed to the severity of the accident and the damage caused as a result of the impact.

The pilot’s initial misdiagnosis of low rotor RPM warning associated, with the alleged abnormal torque reading led the pilot to enter into the emergency descent instead of actioning the low rotor RPM emergency procedure.

The late recognition of engine status resulted in the pilot being unable to recover from the emergency descent as the helicopter was quite low at that time.

The operator had an earlier accident with a B407 in 2017 doing a helicopter external sling load operation (HESLO).