The US National Transportation Safety Board (NTSB) say in their safety investigation report that the flight crew heard a loud “pop” that was followed by the engine’s N1 (fan speed) decreasing while the exhaust gas temperature (EGT) increased.  The engine was shut down and the aircraft diverted safely.

The aircraft suffered minor damage (nicks and dents to the underside of the right wing, inboard aileron and the leading edge of the right horizontal stabilizer).  The NTSB say the engine failure was ‘contained’ i.e. no debris was released radially (only axially).

The NTSB go on to explain:

The disassembly of the engine revealed one 3rd stage turbine vane cluster, No. 29, was missing although the cluster’s bolt hole tab with the retaining nut were still in place on the inner transition duct. 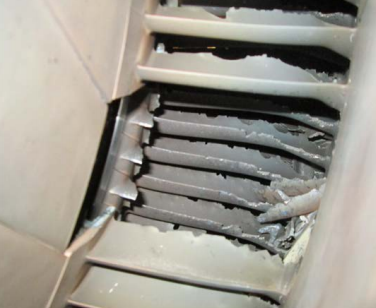 View from the front of the location
of the missing 3rd stage turbine vane cluster (Credit: Delta via NTSB)

The missing cluster’s inner shroud was found in the bottom of the engine in the path of the 3rd stage turbine blades. 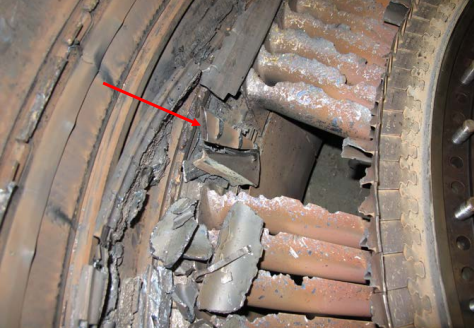 The metallurgical examination of the inner shroud revealed fatigue, however the full extent of the fatigue could not be determined because the end of the fracture surface was smeared.

The examination of the remainder of the LPT revealed all the other turbine vane clusters were complete and in place or the inner and outer shrouds were in place with just the airfoils missing.

All the LPT blades were fractured and the fracture surfaces were coarse and grainy indicating an overload fracture. The examination of the remainder of the engine between the fan and high-pressure turbine did not reveal any damage.

The visual examination and a dimensional inspection of the LPT case revealed the 3rd stage turbine vane hooks had extensive wear that varied significantly between adjacent hooks.

The dimensional inspection revealed the hook for 3rd stage turbine vane cluster No. 29, the missing vane cluster, had the most wear and that wear was tapered.

Because of previous contained and uncontained PW4000 LPT events, P&W has revised the engine manual to add extensive inspections and repairs to LPT components as well as limiting the number of strip and recoat repairs that can be done to PW4000 LPT airfoils. The inspections and repairs that were subsequently adopted into an airworthiness directive (AD) included a visual and dimensional inspection of the LPT case’s vane hooks.

On 7 November 2012, the Federal Aviation Administration (FAA) issued AD 2012-14-09 for PW4000-94 inch and PW4000-100 inch engines because of reports of 3rd and 4th stage turbine vane fractures.  This AD requires dimensional inspections of LPT 3rd stage vanes and the rear turbine case, inspection of LPT 4th stage vanes at the next LPT overhaul and removal of vanes with non-conforming airfoil fillet radii and vanes with more than one strip and recoat repair. This AD also requires disassembly and reassembly of the 2nd stage high-pressure turbine (HPT) rotor and 3rd stage LPT rotor at the next HPT and LPT overhauls.

The tapered wear that was noted on the LPT case’s 3rd stage turbine vane hooks occurred over time. The records do not list any work on the LPT case’s vane hooks at the last overhaul, so it cannot be determined if the wear that resulted in the disengagement of the 3rd stage turbine vane cluster had existed only from the last overhaul or had existed prior to that overhaul.

However, the revised inspection and repair procedures that are now mandated by an AD likely would have captured the wear and required it to be repaired or the case replaced.