With the continued popularity and sales of camera equipped ‘drones’* it was probably inevitable that this would happen, but one drone operator John Thompson got more than he bargained for while filming a house fire on 4 June 2015 in the US.  The firemen turned the hose on the drone… 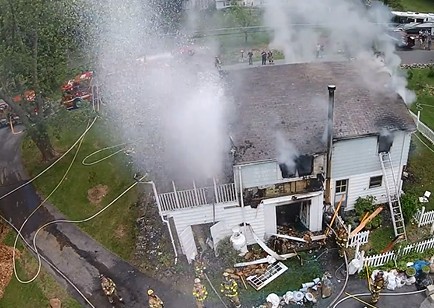 The ‘attack’ happens at about 12 mins.  Perhaps surprisingly the drone is able to continue operating.

The use of such vehicles in and around emergency sites has caused concern to first responders and air operators previously, particular as police, air ambulance, SAR and fire fighting helicopters could be operating in their vicinity. https://www.youtube.com/watch?v=5Aj0BJi9Hcg&feature=player_embedded
At another fire in March 2015, a news gathering helicopter spotted a drone flying above another news helicopter and filmed the drone and ultimately tracked the operator to their home.

In the US Know Before You Fly is an education campaign founded by the Association for Unmanned Vehicle Systems International (AUVSI), the Academy of Model Aeronautics (AMA), and the Small UAV Coalition in partnership with the Federal Aviation Administration (FAA).  Its aim is to educate prospective users about the safe and responsible operation of UAS.

The UK Civil Aviation Authority (CAA) has issued this video:

* In an alphabet soup of acronyms Drones may be referred to as Unmanned Air Systems (UAS), Remotely Piloted Air Systems (RPAS), Small Unmanned Aircraft (SUMA) or model aircraft depending on their size and local regulations & custom…

UPDATE 9 January 2017: We also discuss the risk to manned helicopters of drone strikes.

With UAS experience going back to the mid 1990s Aerossurance can provide expert advice on aviation safety, UAS and aviation regulation.  For practical aviation advice you can trust, contact us at: enquiries@aerossurance.com