Following the handover of the first two 7.5t, 16 passenger Airbus Helicopters EC175s to Belgian operator NHV on 11 December 2014, the type entered service just days later on contract to German oil and gas company Wintershall.  The aircraft are on the Dutch register and based at Den Helder in the Netherlands (the main base for offshore helicopters in the Netherlands).

The EC175 is the second ‘super-medium’ type to enter service this year, following the AgustaWestland AW189, introduced by Bristow in Norwich for GDF Suez E&P UK.

The EC175 entry into service is approximately 2 years later than originally expected, in part due to the complexity of certifying the Helionix avionics (especially with just two prototypes) and partly because of the engineering effort diverted to the EC225 in 2012 and 2013.

NHV have ordered 16 EC175s, with 6 more due for delivery in 2015.  The next customer to receive the type is expected to Russian operator UTAir who have placed 15 orders and 15 options, and may receive MSN 5003 shortly (though Russian certification is still awaited).  They will be followed in the new year by Heli-Union, the French oil and gas operator, who has extensive operations in Africa.

AINonline reports that NHV have:

…so far has put 20 pilots through ground training, Level-D full-flight simulation and actual flight instruction. NHV pilots each flew 40 hours in the sim and four hours in the helicopter, two hours of which were the check ride leading to qualification. Thirty technicians have received EC175 maintenance type rating training, and they have access to the web-based interactive technical publications. NHV will also benefit from a tailored support program that provides one mechanic and one avionics specialist on site. Airbus Helicopters has invested much effort in spare parts… with more than 1,000 items already placed in NHV’s inventories, according to Dominique Maudet, executive vice president for global business and services for Airbus Helicopters.

The Level D full-flight simulator is at the Helisim Training Academy, adjacent to Airbus Helicopters’ Marignane facility.  The simulator, certified by EASA in July 2014, incorporates a state-of-the-art visual projection system with a 210°x80° continuous field of view.

Flight International reports interest in the type for Search & Rescue (SAR) missions (with the Hong Kong Government Flying Service, who have recently started a tender process for 7 helicopters in two batches, mentioned as one sales target):

Early design activities for the SAR model are already under way, with an initial prototype to fly in early 2016. However, Airbus Helicopters says development of the variant will be progressive as customer-mandated mission systems and equipment are integrated onto the baseline oil and gas model. Deliveries would commence in the 2017 timeframe…

Flight International also reports the potential availability of the type with the Turbomeca Ardiden 3C engine in addition to the current Pratt & Whitney Canada PT6C-67E.   An engine change to a lighter, more efficient engine would be of particular value in enhancing the EC175’s performance against its larger 8.3t competitor, the AW189 and the forthcoming EC.

The left hand engine can operate in ‘hotel mode’ i.e. as an APU.  The aircraft has 2 independent air conditioning systems.

The EC175 is the first Part 29 rotorcraft designed to MSG3 principles with a Maintenance Review Board (MRB).

Currently 18 EC175s are on the production line.  Flight International also reports that:

Presently each helicopter takes around 12 months to complete, but the target is to eventually cut this to five as Airbus ramps up to a rate of 30 per year within three years. This will be achieved by shifting from a static assembly line to a faster flow line, the airframer says.

Airbus are keen to point out the aircraft has 2600l of internal fuel as standard, more than an AW189 with a belly tank. 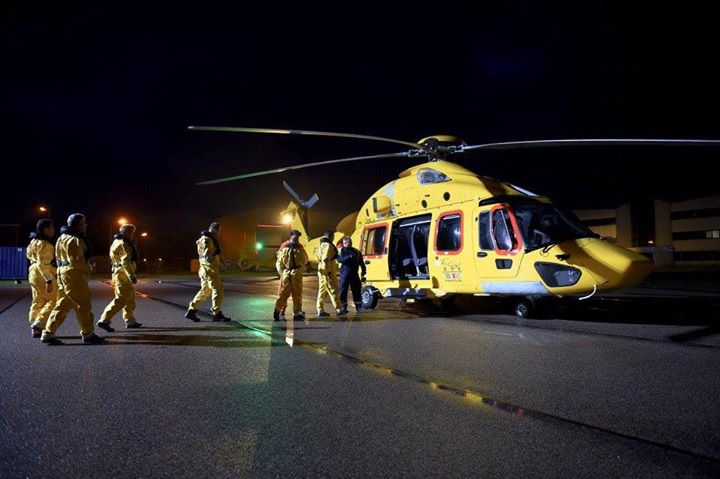 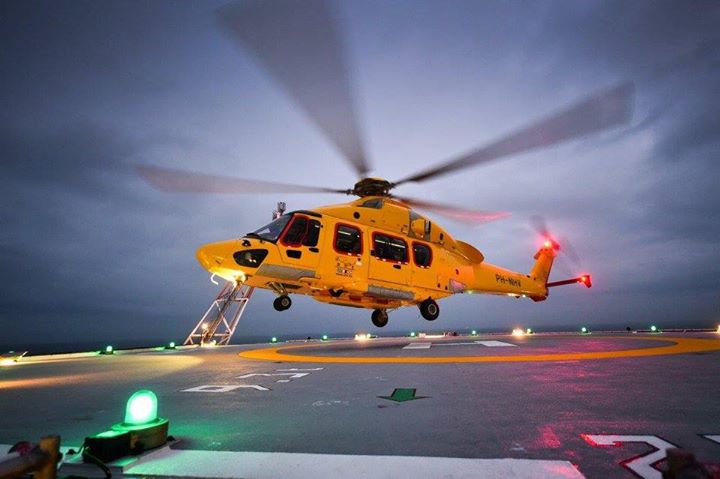 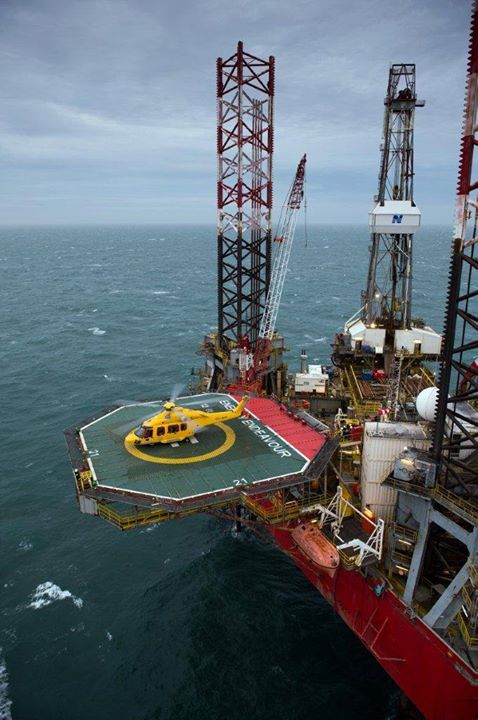 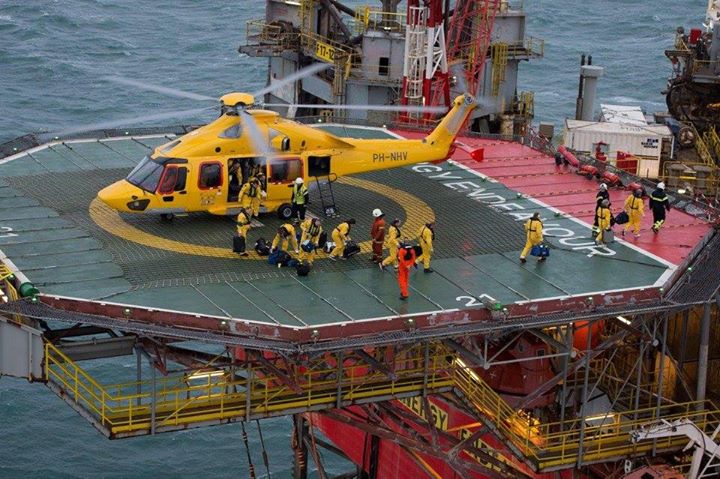 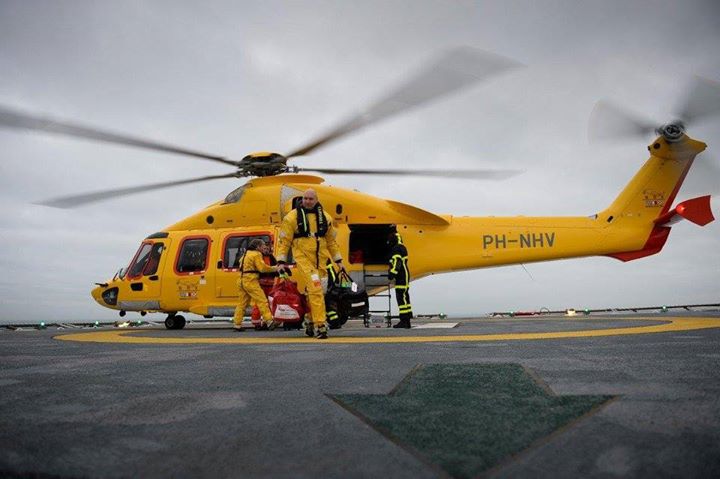 Note the small baggage bay access ladder, which can be extended for access to the transmission deck.

NHV was purchased in December 2013 by private equity company Ardian and NHV’s founder and CEO, Eric van Hal.  NHV has already grown in 2014 by the acquisition of the Blueway Group in August 2014 (which includes Dancopter, Airlift and Blueway Offshore Norge), which was completed last week.  The company is reportedly aiming for 25-30% growth in 2015.  In a press release issued as the first two EC175s were delivered, NHV say:

With the acquisition of Blueway, the NHV Group becomes the only operator with a presence in all Oil and Gas producing countries in the North Sea region, as well as a leading position in West Africa. The combined group now employs around 650 people across the globe, with a combined turnover of US$270 million.

According to Flight International:

Van Hal views the 7.5t EC175 – which will see its maximum take-off weight rise to 7.8t by 2016, offering more payload or range – as the perfect platform for around 80% of missions in the North Sea. With capacity for 16 passengers, he thinks it will take work away from heavier helicopters…

NHV reportedly intends to use the EC175 to open a new base in Aberdeen in mid-2015.  The company is yet to secure a contract out of Aberdeen but there are certain contract expiries in 2015 that NHV can be expected to target.

One challenge will be obtaining a suitable site at Aberdeen Airport, an airport notorious for limited real estate.

UPDATE 16 January 2015: Plans have been lodged with the Aberdeen City Council planning department for a facility adjoining the airfield boundary on the Reel Group site at Artic House, Kirkton Drive.

All three existing operators are making moves to enhance their infrastructure at Aberdeen.  CHC has recently announced a major facility refurbishment.  Bristow has moved its supply chain facility offsite to Kintore, freeing space for a passenger terminal replacement which gained planning permission earlier in the year.  Meanwhile Bond Offshore Helicopters opened their Terminal 2 on the site of the old airport social club in February 2014.

Another, more political problem is the accusations of commercial pressures on the industry presented by BALPA to the House of Commons Transport Committee earlier in the year, which based on recent BALPA press releases, they are likely to repeat. NHV will no doubt claim the EC175 offers safety benefits they describe in a recent press release:

However, NHV has already been operating for some years from Norwich. In 2013, when the EC225s fleet was unavailable after two ditchings in 2012, Chevron contracted NHV to operate principally EC155s from the northern Scottish airfield of Wick, to their Alba and Captain installations and to drilling rigs.  Passengers were ferried north by fixed wing aircraft chartered from Loganair.  That operation however ceased after the EC225s returned to service.  NHV acquired a 20m x 44m Rubb hangar for use at Wick.

UPDATE 5 October 2015:  Helihub reported that the first of two H175s,  OO-NSD (MSN 5006) has transited to Aberdeen to “commence a contract 1 Jan 2016”.  We understand this particular was however simply a marketing tour to demonstrate the aircraft to potential customers in the UK and the aircraft did not remain.

UPDATE 12 May 2016: NHV also commences operations in Takoradi,Ghana with two H175s for Tullow.

UPDATE 11 August 2016: Mexican operator Pegaso has taken delivery of their first H175 for offshore use:

UPDATE 23 August 2016: NHV announce they have placed two H175s in Esbjerg, Denmark, at the former DanCopter base, for Maersk Oil. 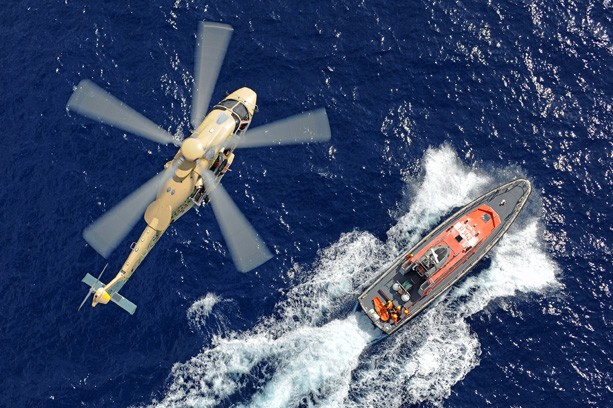 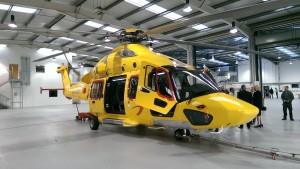 Aerossurance is an Aberdeen based aviation consultancy.  For expert advice on offshore helicopter design, operations, safety and contracting that you can trust, contact: enquiries@aerossurance.com