On the morning of 5 July 2018 MD Helicopters (Hughes) 369D helicopter N8648F of Vertol Systems Company (VSC) impacted the Pacific Ocean near Nauru in Micronesia.  This occurred about 30 seconds after takeoff from a Taiwanese-registered fishing vessel, Jib Yu 868, a 70 m tuna purse seiner of the Chern Lung Fishery. 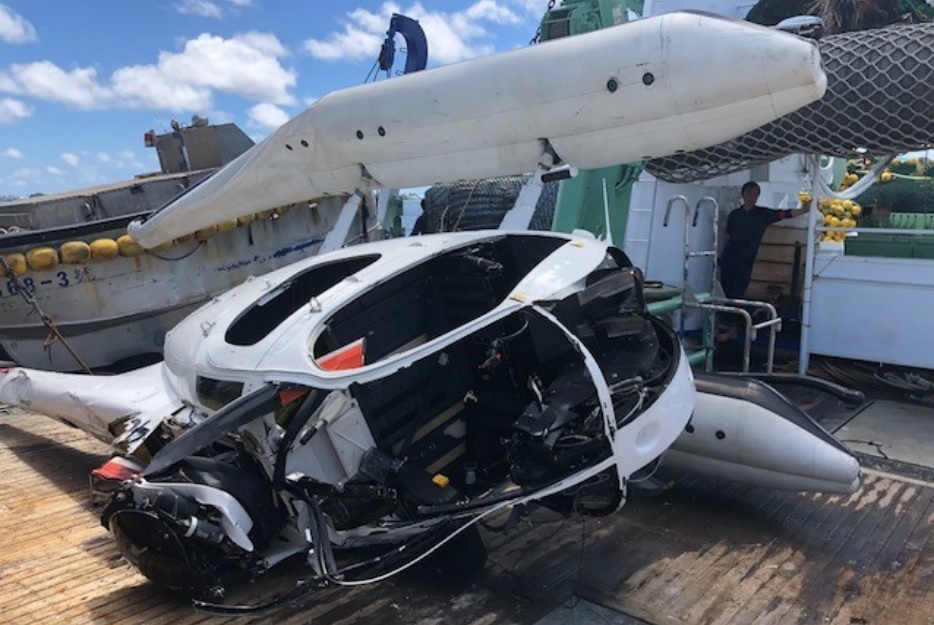 The US pilot and the Taiwanese fish-spotter received fatal injuries.  The US National Transportation Safety Board (NTSB) explain in their safety investigation report (dated 19 May 2020) that:

The pilot and the turbine-powered, float-equipped helicopter were stationed on the ship, and a Taiwanese observer provided fish-spotting services. VSC leased helicopters and pilots to multiple companies, including foreign fishing companies operating in the southern and western Pacific Ocean. 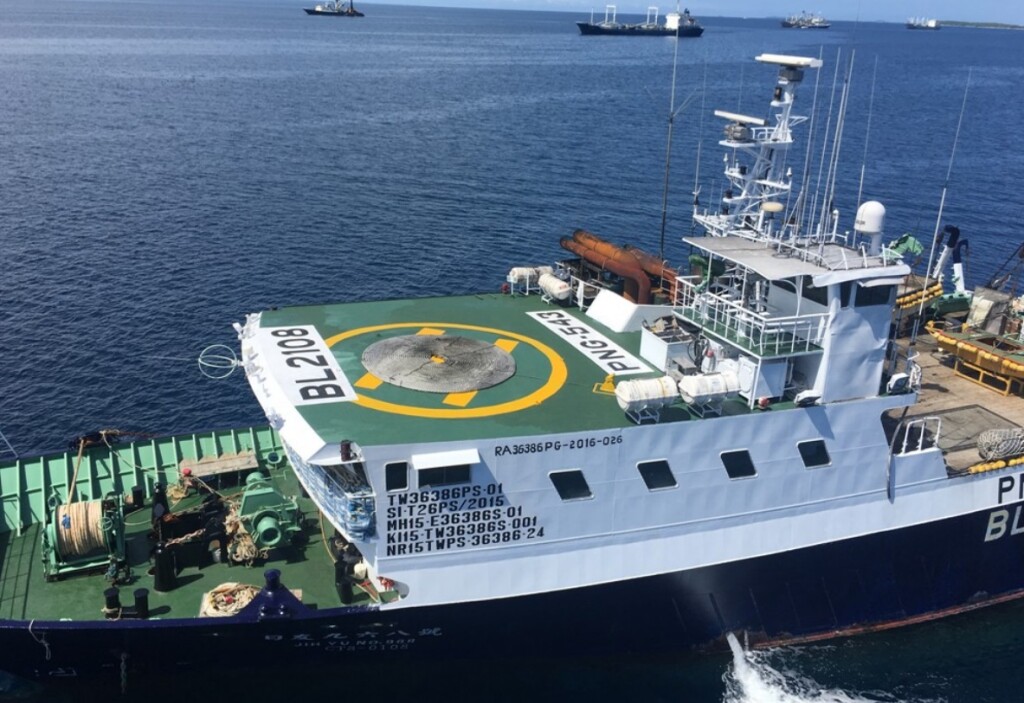 Similar Tuna Boat and Helideck (Note the odd deck markings, odd rope coil arrangement and the confined space even for a D value of 9.4m helicopter) (Credit: via NTSB)

Most of the brief flight was captured by a shipboard surveillance camera. The camera faced forward, with a field of view that included the helicopter on the landing platform, as well as the ocean surface forward of and on both sides of the ship. The ocean surface appeared glassy, with only slight swells and no waves.

Glassy water make it difficult to judge an aircraft’s height above the water.  We discussed this in: Austrian Police EC135P2+ Impacted Glassy Lake, which was similar to accident that occurred in New Zealand to Hughes 369 ZK-HXZ in 2012 (discussed in an NZCAA accident report).

The helicopter lifted off and immediately entered a right descending turn, flying out of view on the right side of the image. 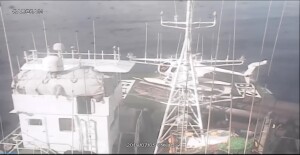 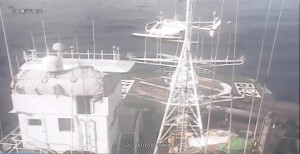 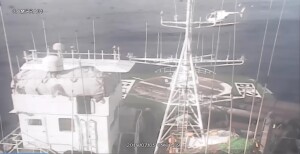 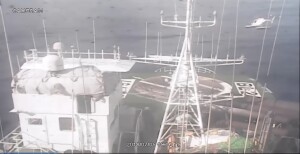 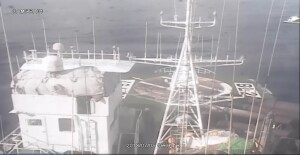 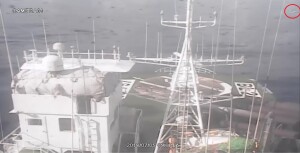 Several seconds [actually about 12 seconds] later, the helicopter re-entered the field of view via the upper right image frame. 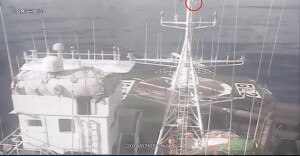 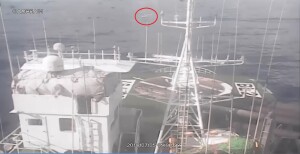 The helicopter was traveling nearly horizontal from right to left at an altitude that was sufficiently low for visible ripples to form on the water surface behind the helicopter.  The helicopter struck the water, overturned, and remained afloat inverted. 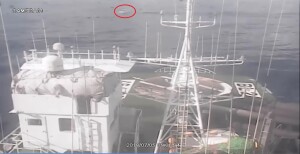 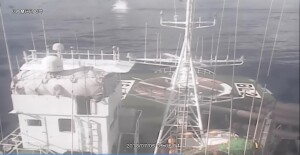 Skiff boats responded to the accident location within minutes, and both helicopter occupants, who were still strapped into their seats [which has 4 point harnesses], were recovered but unable to be resuscitated.

According to the CCTV video footage timestamp the impact occurred c30 seconds after takeoff (not 20 seconds as stated by the NTSB).

The helicopter was destroyed by impact forces and salt water immersion.  …examination of the helicopter revealed no evidence of any mechanical anomalies that would have prevented continued flight… 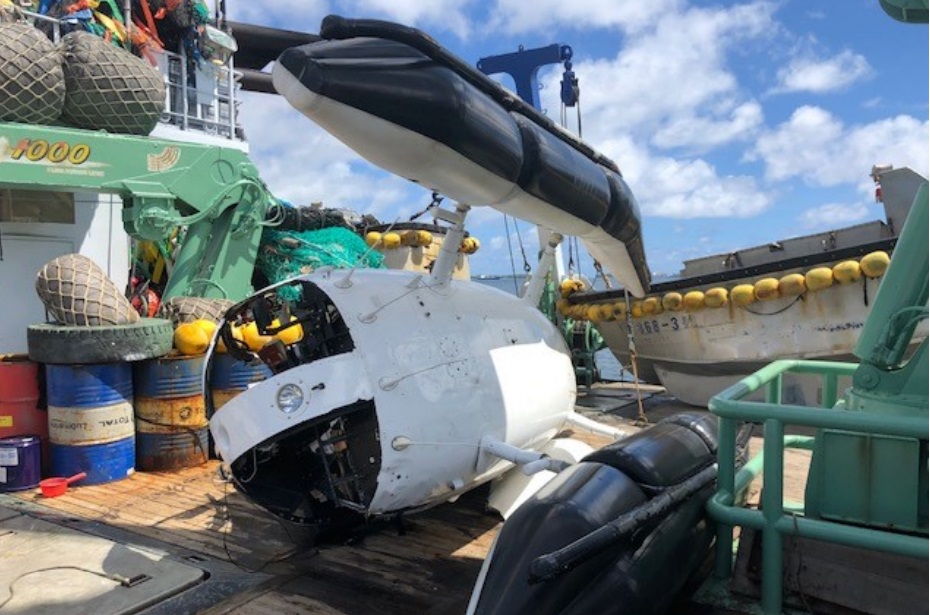 Two days earlier the helicopter, parked outside on the ship’s helideck, was exposed to a significant storm. Subsequently, the pilot had difficulty starting the engine.  However, the NTSB do not believe this was relevant to the accident.

The autopsy report [on the pilot] concluded that there was no significant natural disease or trauma, and that the pilot’s cause of death was “probable drowning.”

No details are recorded of the fish-spotter’s cause of death but it was noted he also had suffered a head injury. NTSB say:

The cockpit appeared in good condition. The windscreen Plexiglas was not present. Occupiable space for the pilot (left side) appeared to not have been compromised.  No seat pan deformation of either the left or right seats was observed.

Apart from mentioning that the rescuers cut the lap belts to extract the victims, NTSB do not discuss survivability issues further.  Sea temperature in that area would be typically close to 29º.

The pilot’s toxicology results indicated the presence of a sedating antihistamine that can reduce reaction time. The pilot’s impairment, if any, from this medication could not be determined given the detected level of medication. However, it is possible that the medication affected the pilot’s reaction time, which was especially critical given that the glassy, nearly featureless ocean surface could have hampered the pilot’s ability to visually determine the helicopter’s height above the water surface. This ocean surface condition, either alone or along with a decreased reaction time, could have compromised the pilot’s ability to recognize and correct the helicopter’s descent toward the water.

…the manual also stated that “there are some simple ways to overcome the visual illusions and increase safety” when operating over glassy water, including using nearby objects, such as shorelines or boats, to aid in maintaining depth perception and altitude awareness. 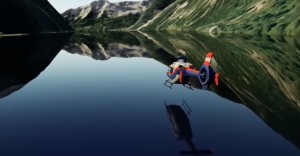