On 22 January 2020 Bell 206LT TwinRanger 206L4 conversion C-GSQA of the Quebec Government Air Service (Service Aérien Gouvernemental or SAG) struck the frozen, snow-covered surface of Lac Saint-Jean in a Controlled Flight Into Terrain (CFIT) accident.  The helicopter was destroyed and despite serious injuries, the pilot was able to egress and call SAG operations to report the accident. 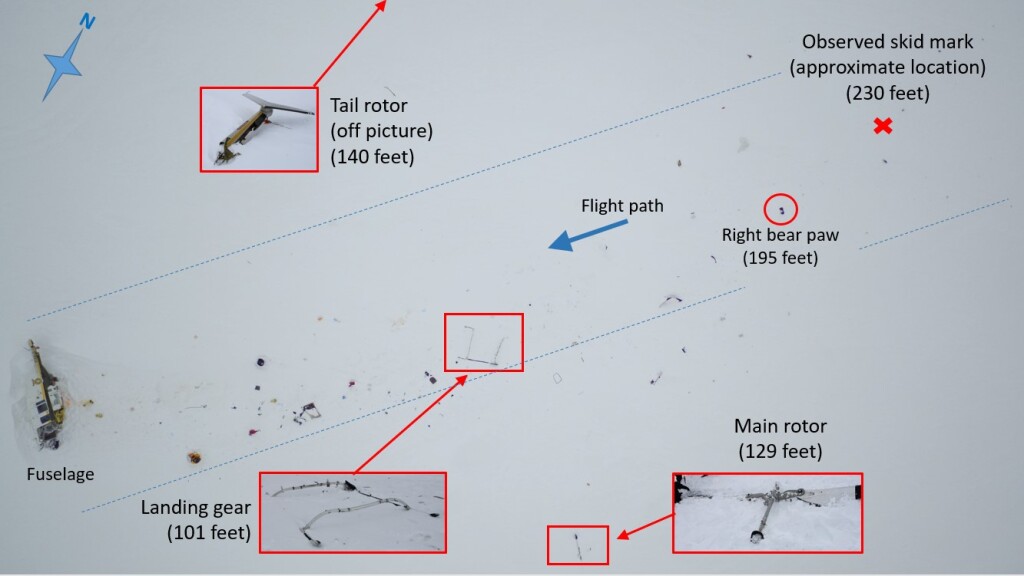 The SAG had purchased this aircraft in 1994 and it was modified in accordance with Supplemental Type Certificate (STC) SH01-30 to be powered by two Rolls-Royce 250-C20R turboshaft engines.

The Transportation Safety Board of Canada (TSB) explain in their safety investigation report (issued on 1 December 2021) that two SAG helicopters were tasked that morning to provide air support to a search for snowmobilers reported missing the day before.  This involved flying for c 50 minutes at just 100 ft over a frozen lake.  Early in the afternoon, one of the helicopters, C-GSQA was released from this assignment…

…given that only one aircraft was required to continue the search, and given that the rear sliding door of the occurrence helicopter was difficult to close…

The pilot (7291 hours total experience, 1050 on the B206, 158 on the B206 Twin) was alone on board, took off from Saint-Henri-de-Taillon at 1402, bound for the La Tuque Aerodrome.  There was no precipitation and visibility was approximately 25 miles.  The pilot flew deliberately slowly…

…to stay under the maximum speed allowed for an open sliding door (90 knots) in case the door accidentally opened in flight.

Approximately 7 minutes after takeoff, the helicopter struck the frozen, snow-covered surface of the lake and came to rest on its left side.

The helicopter was equipped with a satellite flight tracking system which transmitted GPS position, altitude, and ground speed every two minutes.  This data was examined. 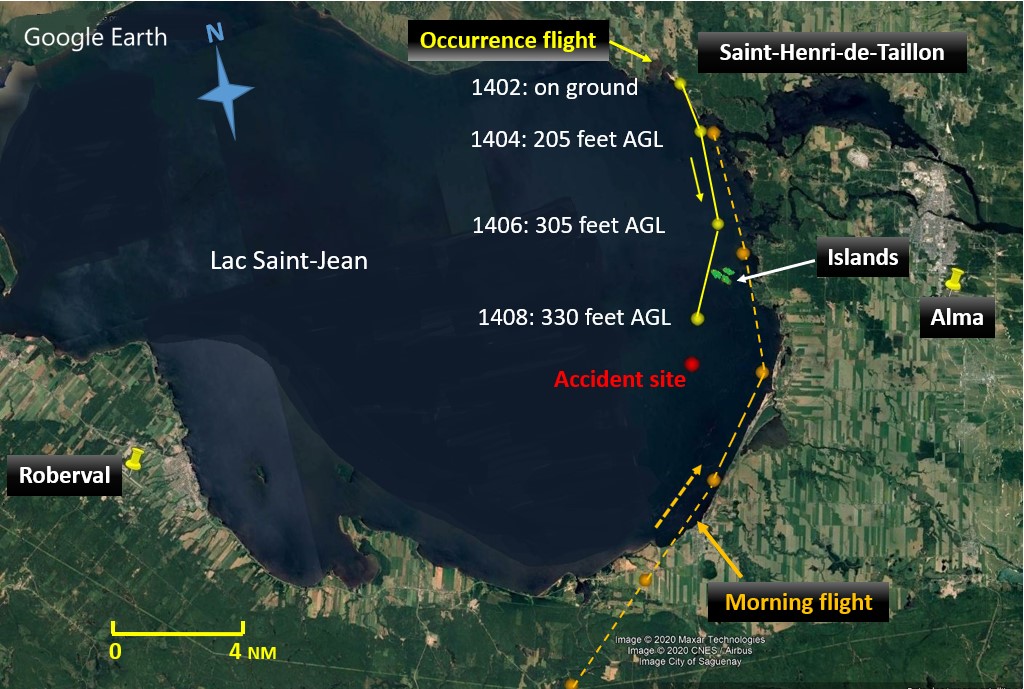 On the inbound flight the two helicopters had hugged the shoreline.

For the return flight in the afternoon, the occurrence pilot had planned to fly at a low altitude (approximately 500 feet AGL) because there was a headwind. The aircraft took off …at 1402 and flew a track that was almost parallel to the eastern shore of the lake.

At 1406, at an altitude of 305 feet AGL and 1 NM laterally from the shore, the aircraft was approaching a group of islands 1.3 NM ahead. The pilot veered right, flying west of the islands.

The aircraft struck the surface of the lake about 1 minute later, approximately 1.34 NM further. The angle between the height of the last recorded position at 1408 and the point of impact was approximately 2.3°.

The main debris at the accident site was scattered over a distance of approximately 260 feet, along a straight line… The extent of the debris indicates that the horizontal speed at the time of impact was likely high, and that the angle at which the aircraft hit the frozen surface of the lake must have been shallow, which is characteristic of a CFIT accident…

The rear sliding door was still solidly attached to its track and the integrity of the rear cabin was not compromised.

The helicopter was equipped with a single radio altimeter (RADALT) in addition to a conventional pressure altimeter.  The RADALT decision height selector bug allows the pilot to choose a minimum height at which a light illuminates and an aural alarm sounds.  Investigators found the bug set to zero, rendering the warning function ineffective  Furthermore the pressure setting on the conventional pressure altimeter was set so that it was overreading by 50 ft.

The very nature of single-pilot VFR operations in light helicopters like the Bell 206 is such that manoeuvres are regularly conducted at low altitude or close to the ground.

While a generalisation, that certain appears to be valid for the SAG’s operations.  However they then make a more dubious and unevidenced sweeping statement:

…in general, air operators do not recommend the use of a radio altimeter for these types of operations…

The SAG Ops Manual does however contain procedures “to reduce the risk of inadvertent collision with terrain”.  These were entirely based on the use of dual RADALT.

The investigation determined that it was not common practice for SAG pilots to use the radio altimeter decision height selector bug in the occurrence aircraft, and that use of this selector bug was left to the pilots’ discretion.

While the weather was suitable for a VFR flight, the investigators note that:

The diffused light on the day of the accident reduced shadows and contrast on the lake’s snow-covered surface.  In addition, given that the accident occurred…a little more than 2 hours before sunset the light had already begun to fade, making it more difficult to perceive details. 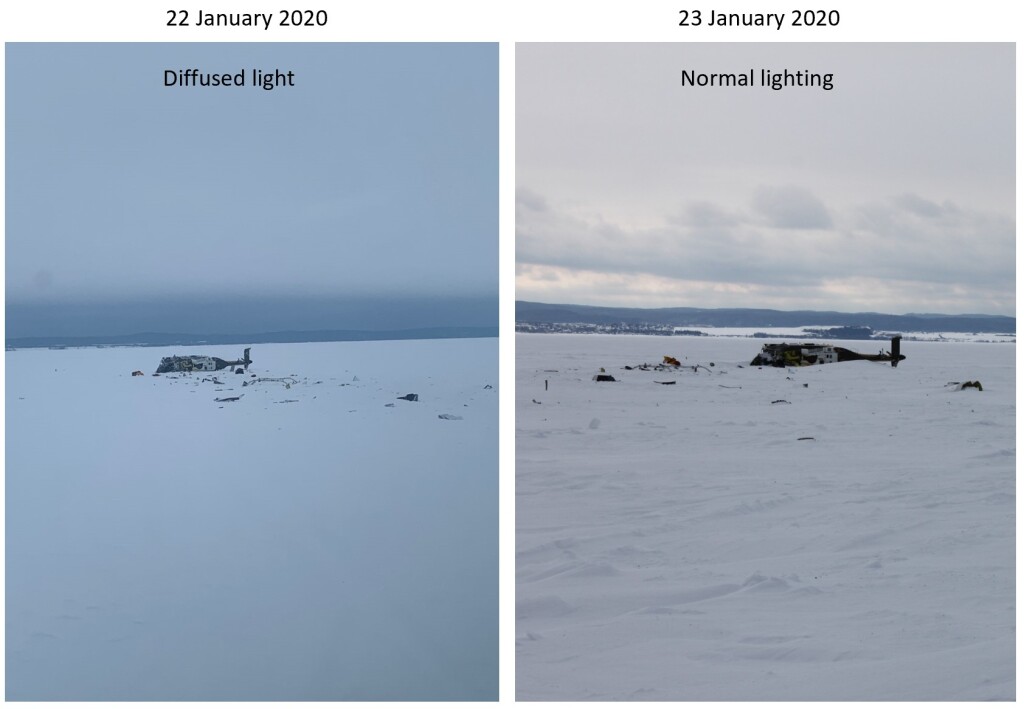 This is consistent with the phenomena of ‘flat light‘.  TSB note that:

The SAG’s training program does not specifically cover the phenomenon of flat light.

TSB highlight that the US guidance on this topic is clearer than Transport Canada’s.   The FAA warns pilots that even when visual references are good it may not be safe to continue the flight, recommending that:

When flying alongside lakeshores, use them as a reference point. Even if you can see the other side, realize that your depth perception may be poor and it is easy to fly into the surface. If you must cross the lake, check the altimeter frequently and maintain a safe altitude while you still have a good reference. Don’t descend below that altitude.

For VFR flights, it is important that visibility allows the pilot to see visual references which, in turn, must provide enough visual cues to maintain proper spatial awareness. The quality and number of visual cues provided by the visual references may be insufficient to maintain 3D vision, as is the case when flying over a surface with no contrast in flat light. When visual cues are insufficient, 3D vision deteriorates and becomes 2 dimensional (2D). This deterioration may, however, go unnoticed, which makes flat light an insidious risk and dangerous to pilots. In general, pilots see well because visibility is good, but they may not notice when their depth perception is reduced, or gone completely.

By turning to fly a more direct route across the lake “there was a significant reduction in reliable visual cues“.   TSB simulated the view of the shoreline:

The insidious nature of flat light could explain why the pilot held onto the strong impression that he was in cruise flight at approximately 500 feet AGL.

Shockingly there are no recommendations made even though  TSB “is not aware of any safety action taken following this occurrence”.