On 11 July 2021 Airbus AS365N3 EC-JDQ, operated by Eliance for the Spanish Customs Surveillance Service (Servicio de Vigilancia Aduanera [SVA]) impacted the sea while manoeuvring in pursuit of a smuggler’s boat.  The two Fight Crew survived but a Customs Agent was died, having been trapped in the capsized helicopter. 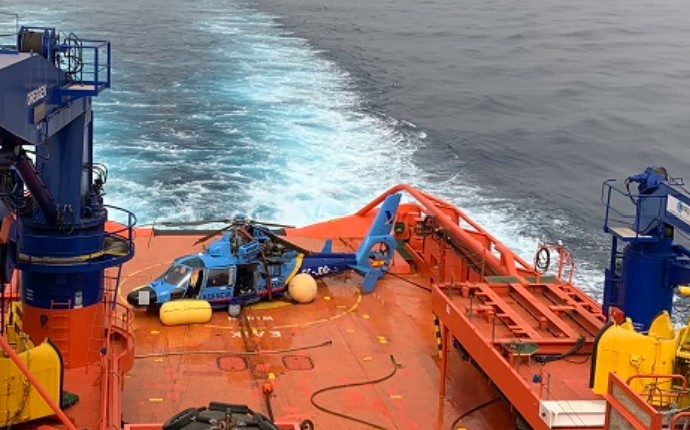 In the safety investigation by the Spanish the Civil Aviation Accident and Incident Investigation Commission (CIAIAC), issued in Spanish in December 2022, the investigators explain that the helicopter left its base at Algeciras, Cadiz at 01:20 for a routine patrol.  The Straits of Gibraltar are notorious route for drug smuggling from North Africa.

The Aircraft Commander (9,347 hours experience, 4,005 on type and c7,000 hours flying customs flights) was the Pilot Flying (PF).  The Co-Pilot (5,935 hours, though only 14.5 on type having joined the operator 2 months earlier with a SAR & HEMS background) was the Pilot Monitoring (PM).  The Customs Agent was in the cabin, in the front left seat, at a FLIR equipped work station.  The aircraft was operating Night VFR rules.  The investigation report makes no mention of Night Vision Imaging Systems (NVIS) googles being used.

When they took off, the pilot at the controls the PF set their radalt bug to 300 ft and the other PM had theirs set to 500 ft. 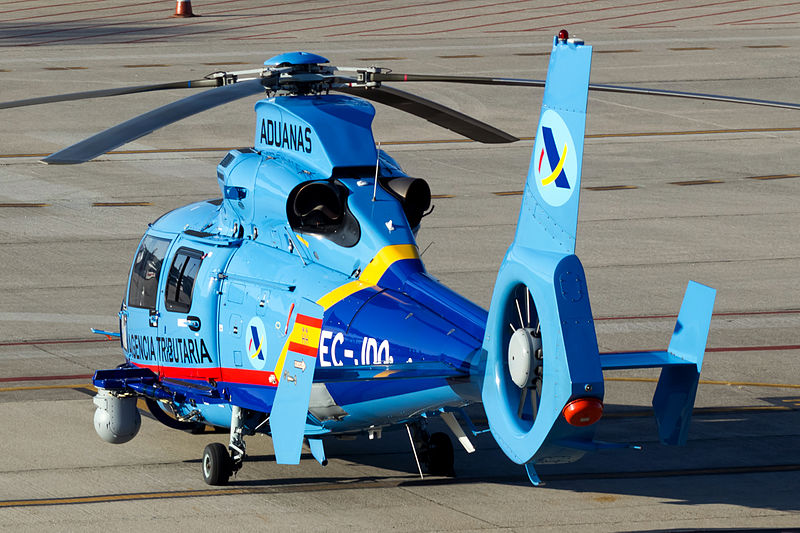 When they had been flying for approximately five minutes, they heard on the radio that an SVA vessel (Patrol Boat Águila 4 [a 17 m, 50 knot, Rodman 55]), based in the Port of Algeciras, was pursuing a boat and the Customs Agent offered to support them from the air in the chase.

The crew of the Patrol Boat answered in the affirmative and provided them with their coordinates.

The helicopter crew verified that the Patrol Boat was at a distance of approximately 35 NM to the east and began to move towards the area where the pursuit was taking place.

The smugglers were taking a longer route to Spain.   Which also meant operating further from cultural (i.e. man-made) lighting ashore. 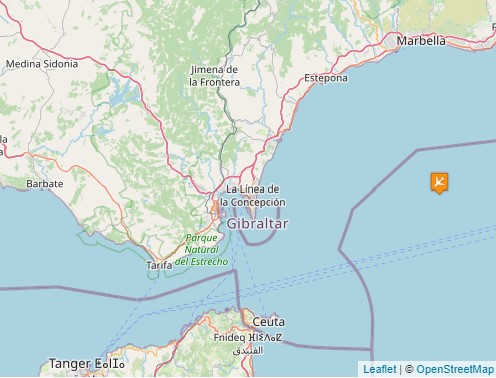 When they were south of Europa Point [site of the Trinity House lighthouse at the southern tip of Gibraltar], heading towards the coordinate point they had been given, they gradually descended from an altitude of 3,500 ft, until they reached the vicinity of the vessels, flying with 70% torque and a speed of 130 kt…

When in pursuit of a vessel, the flight crew would turn on the landing lights.  These were deployed but not turned on at this point.  When slowing below 80 knots the PM armed the emergency flotation system.  Crucially:

There was a lot of humidity and scattered banks of fog…according to a statement from the PF.

When the Customs Agent located the two vessels, using the FLIR surveillance system, he guided the crew with more precision until they positioned themselves close to them.

When positioned to the left of the SVA patrol boat they descended “very rapidly” from an altitude of 500 ft to below 100 ft.  There is no discussion on the use of any automation, the implication being that the descent was conducted manually.  It can be presumed that customs flights have a low flying exception (though the CIAIAC don’t elaborate).

As they descended below 200 ft the flight crew turned the landing lights on.  The illumination resulted in glare from the humidity in the air which mean the flight crew lost sight of the vessels and the surface.  Shortly after the crew “felt a jolt” as the tail contacted the sea.  Wind speed was c30 knots, wave height c 1 m and sea temperature was 22°.

The occupants of the helicopter do not appear to have been equipped with a Compressed Air – Emergency Breathing System (CA-EBS).  All were wearing lifejackets.  Only the Aircraft Commander was wearing a helmet.

The two Flight Crew members each left the aircraft through the door on their side and swam until they reached the surface.

The Aircraft Commander swam around the nose to the Co-pilot.  They realised the Customs Agent had not surfaced so both swan underwater to try to locate and rescue him.

The helicopter had a manually deployed cabin mounted internal life raft.  This was not deployed.

Patrol Boat Águila 4 abandoned the pursuit immediately the helicopter crashed, radioed a mayday at 01:45 and went to the aid of the occupants of the helicopter. Two of the vessel’s crew dived into the water too.

When the Commander submerged again and opened a helicopter door, he came across a package that turned out to be a backpack carried by the Customs Agent.

After several attempts the rescuers located the Customs Agent in the cabin and brought him to the
surface (this was radioed at 01:53). 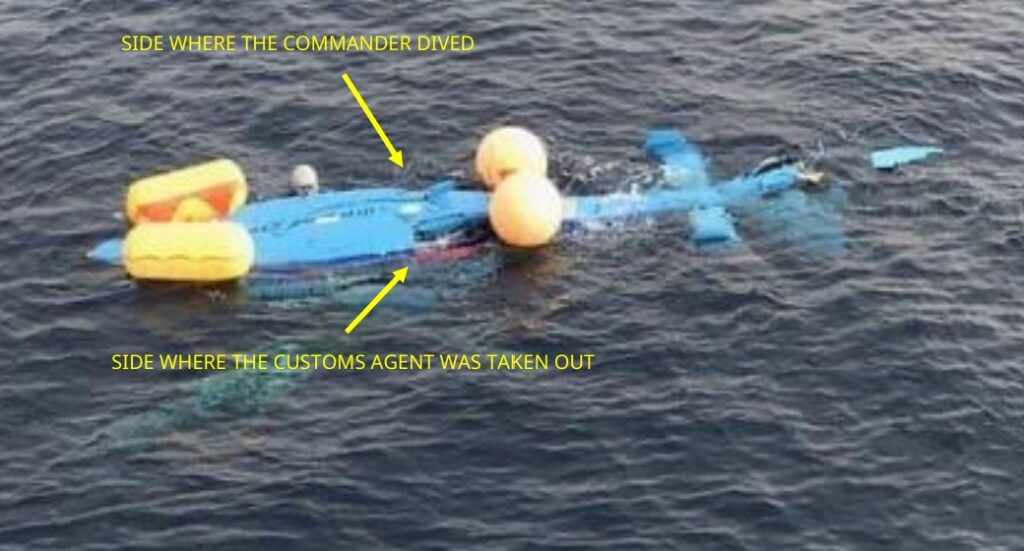 The boat took everyone aboard and headed for the Sotogrande marina.  The SAR helicopter that had been activated was stood down based on the vessel’s ETA in port.  During the journey members of the crew performed cardiopulmonary resuscitation (CPR) on the rescued Customs Agent, who was later pronounced dead in hospital.  There was however a delay ensuring a ground ambulance met the vessel in port.

The helicopter did not carry cockpit voice or flight data recorders, which were not required by regulation.

Examination of GPS data showed the began to descend continuously at 1:36:45, when it was at an altitude of 3,499 ft.

The data extracted from the images of the FLIR infrared tracking system also confirm an excessive average vertical speed in the last moments, above 570 ft/min, and indicate that the difference in headings between the helicopter and the vessel they were chasing. 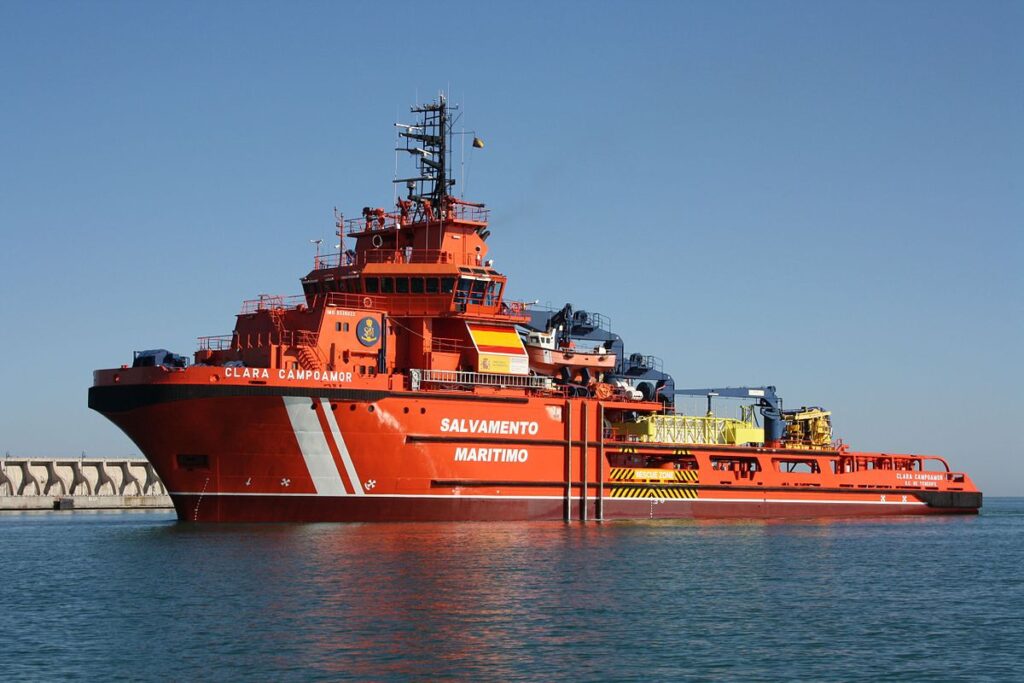 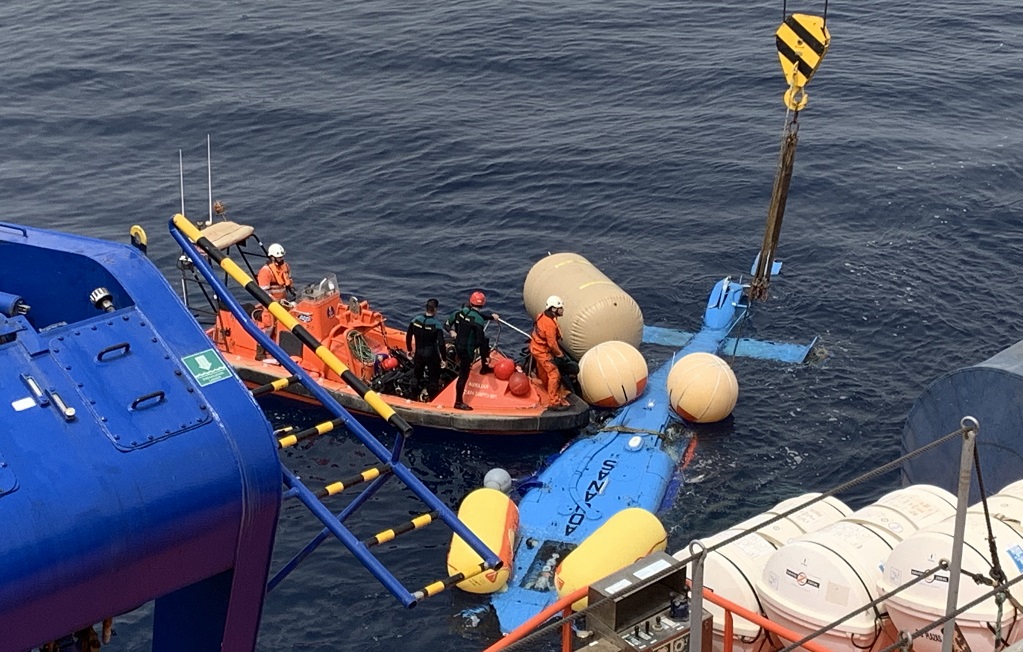 The tail was found badly damaged.  The Automatically Deployable Emergency Locator Transmitter (ADELT) was missing.  There is no mention of it activating or being recovered. 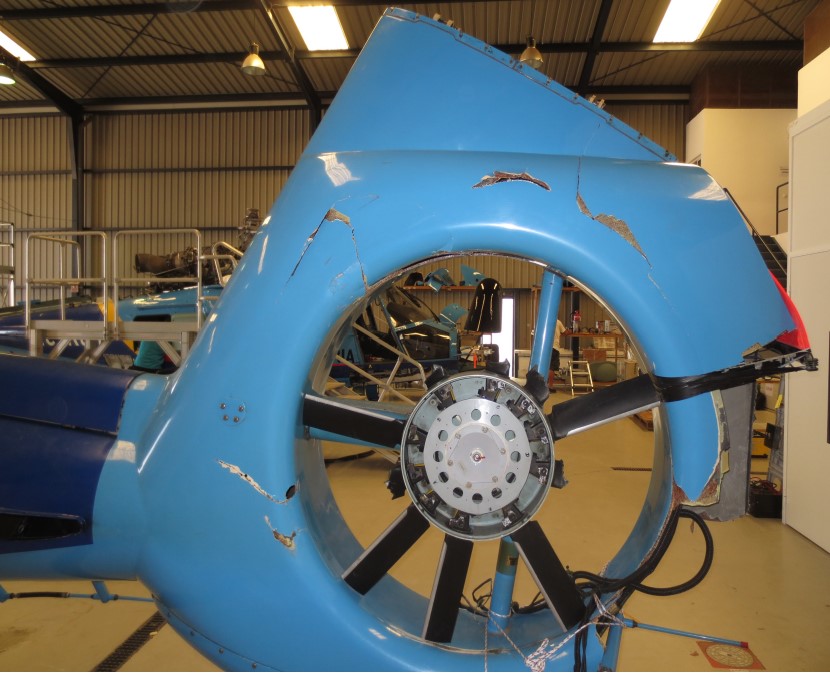 The autopsy determined that the cause of death [of the Customs Agent] was acute respiratory failure as a consequence of mechanical suffocation by immersion, around 2:00 h.

The investigation has concluded that the cause of the accident was carrying out a sudden manoeuvre at low altitude and with reduced visibility, not contemplated in the Operations Manual.

Two recommendations were made on 14 March 2022 to the operator to enhance their Operations Manual.

Subsequently the operator received a recommendation to provide specific training for crew new to customs operations.

SVA were recommended to define the requirements for customs aviation operations and to ensure that HUET training was conducted by its personnel (noting that the officer who died was in fact HUET trained).  The local government of Andalucía were tasked to investigate the delayed ground ambulance arrival.

No specific reason was determined for the Customs Agent’s inability to egress.

There is minimal consideration of the visual effect the crew encountered in the report.

There is also no consideration of the radalt settings and what alerts occured and no comparison with the newly optimised HTAWS offshore modes.

Discussions of the value of having NVIS and CA-EBS would have been useful.

Again this appears to be another case of an ADELT failure, although it is likely to have borne the full force of the initial water impact.