On 28 June 2019, at about 0040 Local Time Leonardo Helicopters AW109S N11NM, an air ambulance operated by North Memorial Healthcare, was destroyed at Brainerd Lakes Regional Airport (BRD), Minnesota. The pilot and flight nurse died at the scene.  The flight paramedic was seriously injured. 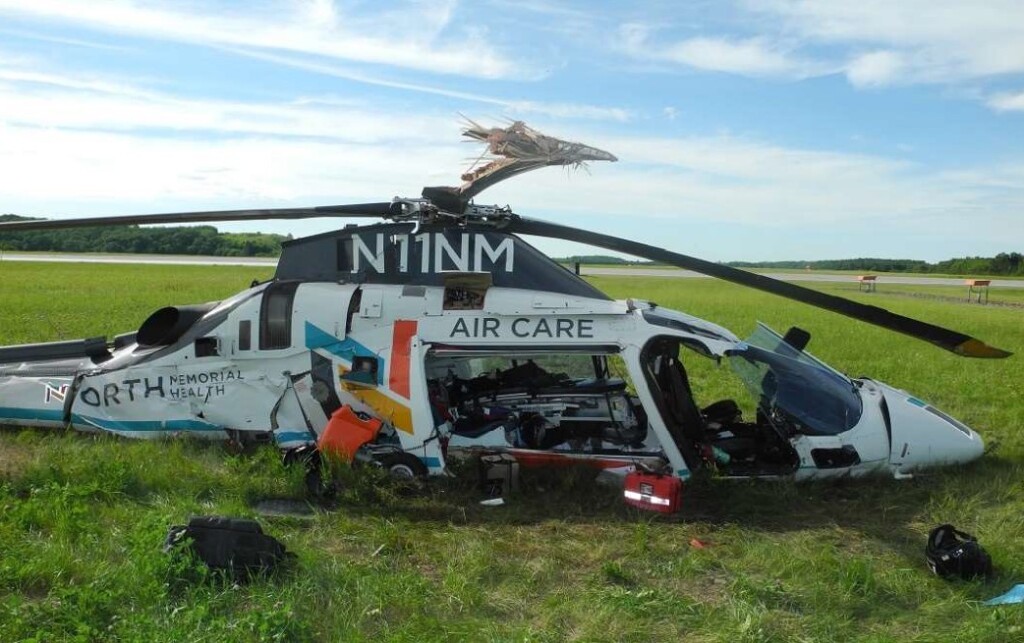 The helicopter had been approaching the airport in dark night instrument meteorological conditions (IMC) after delivering a patient to the North Memorial Medical Centre and was just commencing a missed approach.  This was the operator’s second night A109S accident in less than three years.  The previous one, non-fatal, involving N91NM on 17 September 2016 was discussed in this Aerossurance article: HEMS A109S Night Loss of Control Inflight, issued on 29 September 2018.  That also involved a missed approach and NTSB determined in the first accident that “the pilot’s excessive cyclic input…resulted in a loss of control and spiralling descent into terrain”.

…equipped with a 2-axis autopilot for lateral (roll) and longitudinal (pitch) control. The autopilot provided for limited yaw dampening, but no yaw control. Minimum airspeed to comply with IFR handling quality requirements for the helicopter [Vmini] was 55 knots.

BRD was located in a rural area with few ground lights, and there was no moon illumination at the time of the accident. Airport personnel stated that several lakes near BRD would often generate patchy fog and visibility could vary significantly at different locations on the airport.

Another pilot working for the operator told the NTSB:

The flight was returning to BRD after delivering a patient to North Memorial Heliport (MY77), Robbinsdale, Minnesota. An onboard Appareo Vision 1000 device recorded flight data, cockpit imagery, and audio of the flight. The helicopter departed MY77 at 2348, and the pilot received an instrument flight rules [IFR] clearance from air traffic control (ATC) to climb to 6,000 ft mean sea level (msl) and fly direct to BRD.

At 2356, while holding an iPad, the pilot stated on intercom to the paramedic and/or flight nurse that visibility at BRD was “1 mile, looks good.” The pilot requested the instrument landing system runway 23 (ILS RWY 23) approach and informed the controller that he had obtained the current weather at BRD.

At 0028, the pilot selected the BRD automated surface observing system (ASOS) frequency. The ASOS transmission included a ceiling of 200 ft above ground level (agl) and 1/4-mile visibility with fog. The controller cleared the helicopter for the ILS RWY 23 approach. Shortly thereafter, the ASOS transmitted weather included 1/2-mile visibility with haze, and the pilot stated “awesome, 1/2 we’re legal” on the intercom. The pilot subsequently activated the runway lights.

At 0034:35, the helicopter began a descent on the ILS glideslope with the autopilot coupled. About 5 seconds later, the pilot appeared to turn on the helicopter’s landing light and/or search light. 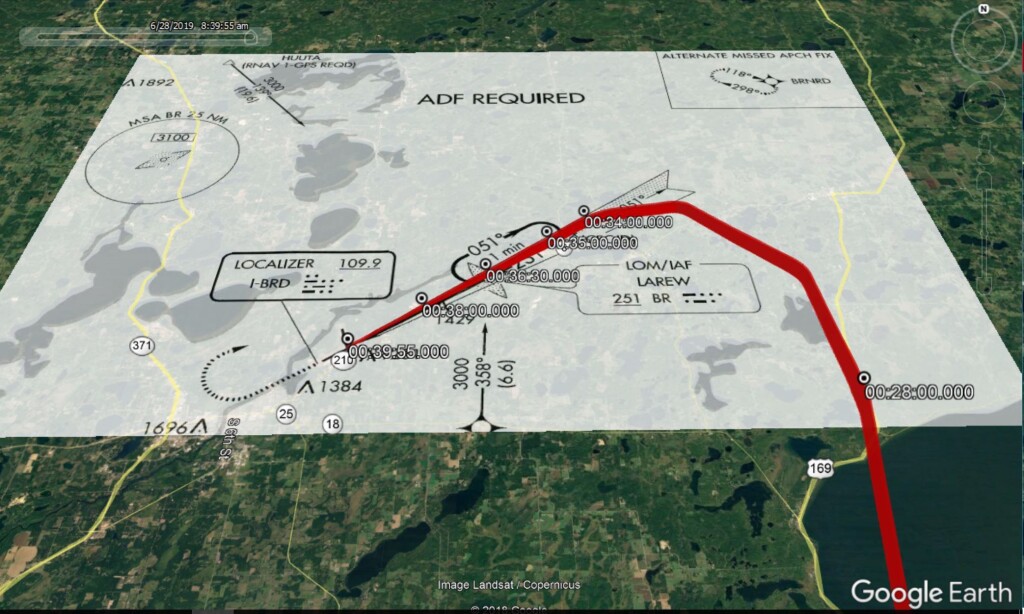 After arriving at the ILS decision height, the pilot selected the altitude hold mode on the flight director and about 1 second later, decoupled the autopilot (pitch and roll steering modes). The radar altimeter read 130 ft agl.

Over the next 14 seconds, with a power setting below 30% torque, the helicopter’s pitch increased from -3° (nose-down) to +20° (nose-up) and the radar altimeter increased to 230 ft agl. As airspeed decreased below 50 knots, the pilot selected vertical speed, and heading modes on the flight director. The helicopter’s power increased rapidly through 40% torque and the airspeed decreased through 25 knots. Based on a GPS groundspeed of 40 knots, the airborne tailwind was about 15 knots. 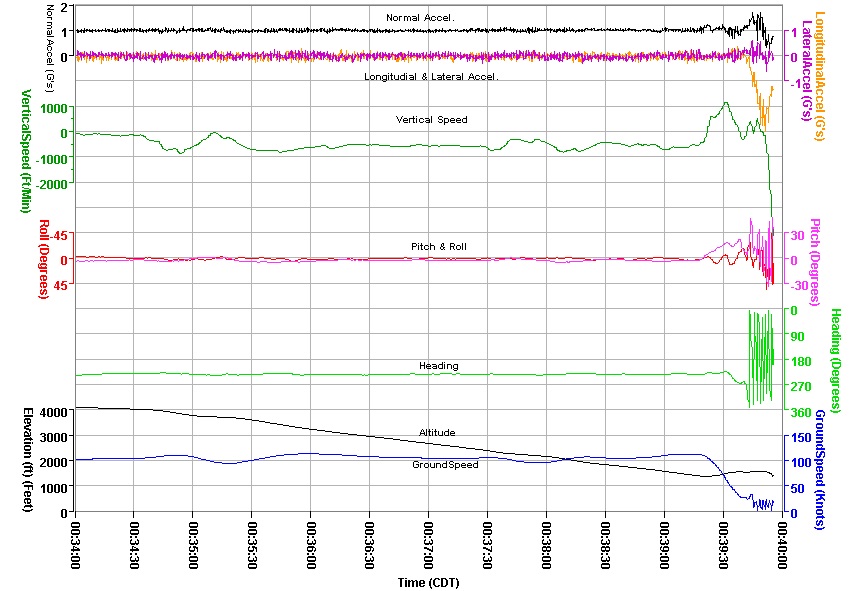 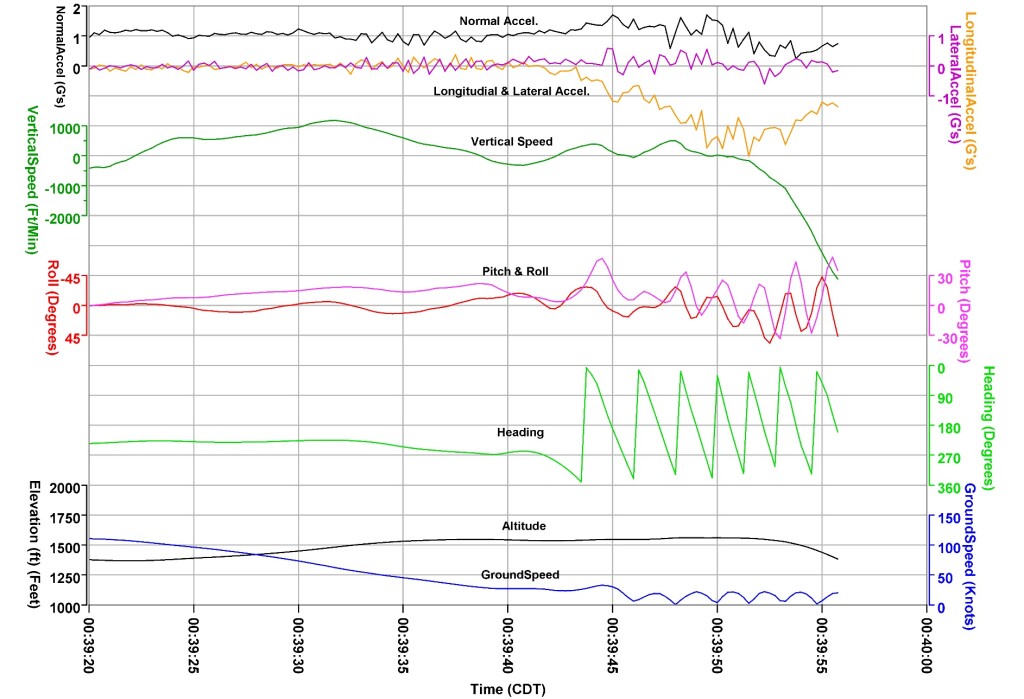 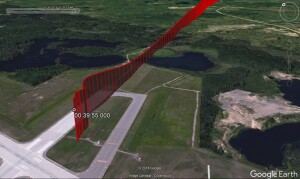 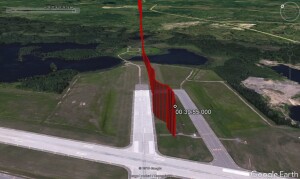 The last recorded information, at 0039:57, indicated that the helicopter was about 100 ft agl. The power setting was below 30% torque and the pilot had selected the “ALT” (altitude hold) button on the flight director.

[T]he flight paramedic (seated in the left forward seat) recalled that the runway lights and surface were visible below a thin fog layer during the approach. As the helicopter  approached the runway, he noticed clouds to the side and recalled the pilot stating that the weather conditions were foggy and that a go-around was needed. The helicopter subsequently spun to the right and impacted the ground. 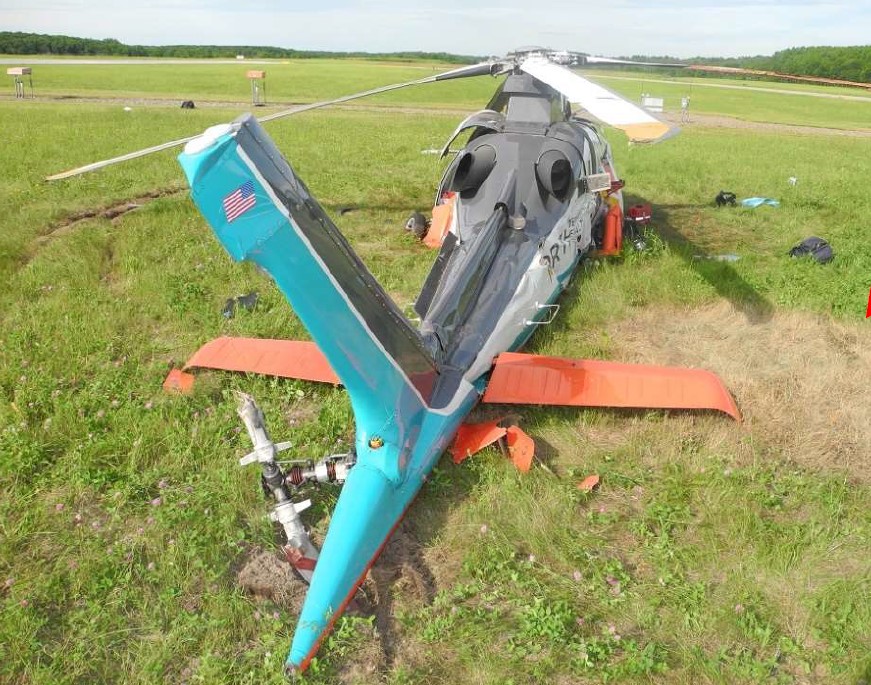 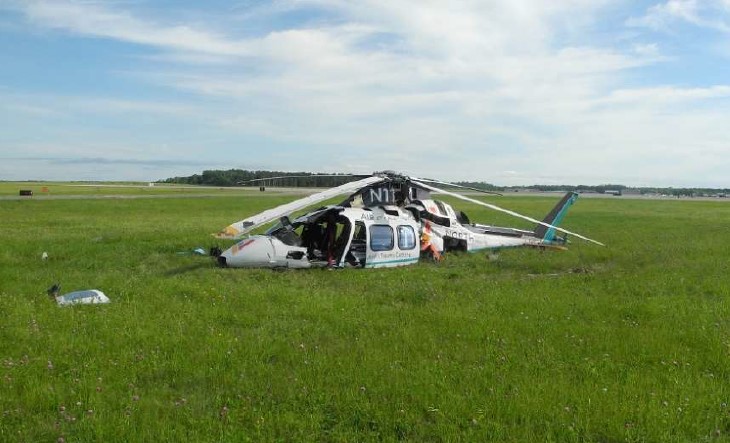 After impact [the survivor] was trapped. His right arm had gotten stuck between the cyclic and the seat and he was slumped sideways and leaning against the pilot. He believed he had broken a few ribs and a broken arm. He attempted to use his foot to press the push to talk on the floor, but he felt pain when he moved his foot. He was able to get his portable radio out of his pocket and radio for help…about 22 minutes after the accident.

Of note is that even for an on-airport accident:

The low-visibility weather conditions contributed to the delayed arrival of first responders.  Emergency response personnel located the helicopter about 41 minutes after the accident.

The cause of both deaths was due to multiple traumatic injuries.  The extent in the vertical crush damage can be seen in this comparison between an exemplar helicopter and N11NM, where 41.5 inches had shrunk to 29 inches in these two FAA images 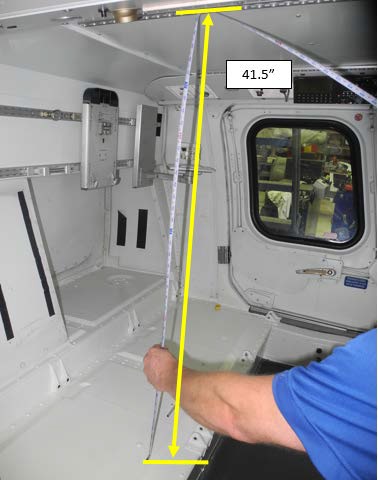 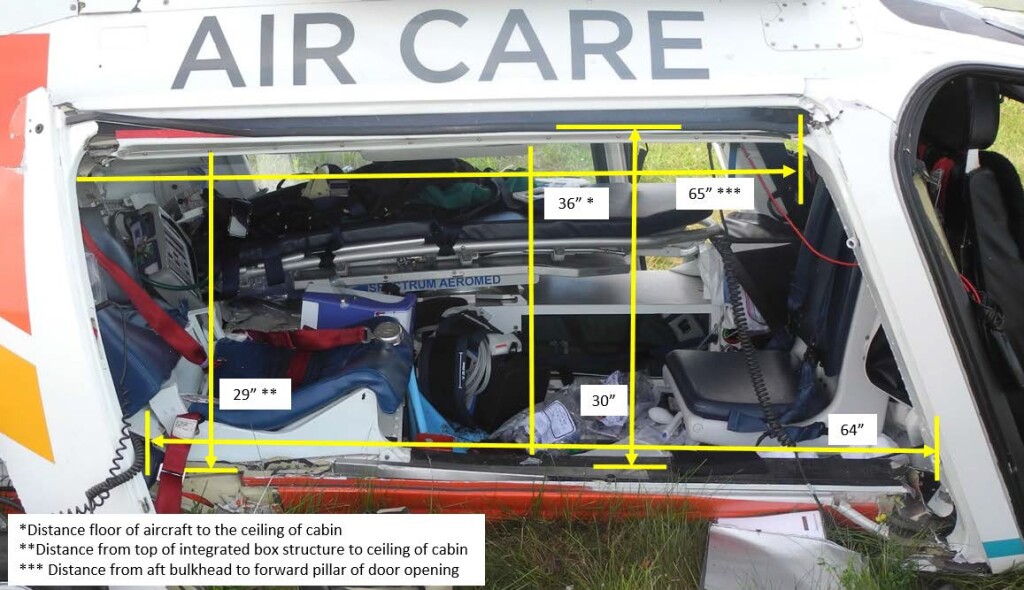 No estimate of the impact g is presented by the NTSB.

The FAA Civil Aerospace Medical Institute (CAMI) reviewed the helicopter’s seats, restraints, and helmet specifications and the effects of the impact with terrain at a high vertical velocity. No anomalies were noted.

The helicopter had been retro-fitted with the Appareo Vision 1000 device 1740 flying hours prior to the accident.  This is…

…a small self-contained image, audio and data recorder…mounted in the overhead of an aircraft’s cockpit[which] records a cockpit image at a rate of four times per second. 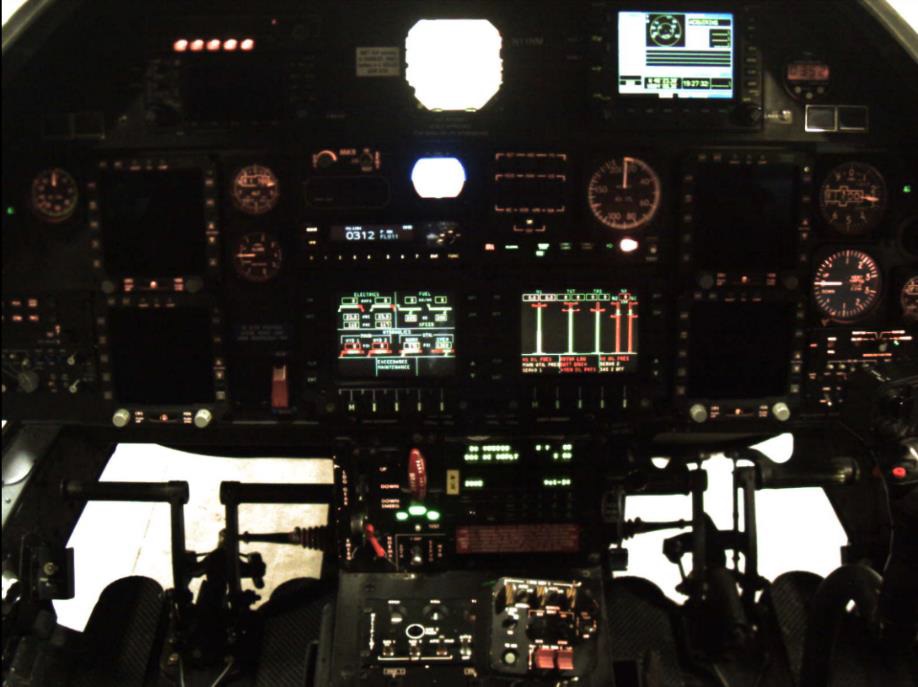 In addition…the device is also capable of recording two tracks of audio that are synchronized with the image data. The unit also contains a GPS receiver that receives GPS satellite-based aircraft time, position, altitude, and speed. [T]he Appareo unit also has a self-contained real-time inertial measuring unit that provides 3-axis accelerations as well as aircraft pitch, roll and yaw data.

The Vision 1000 device was recovered with no sign of obvious damage. 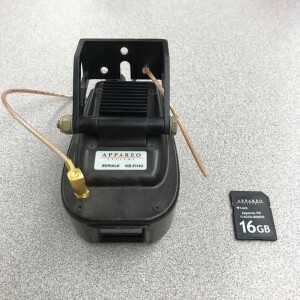 However, the NTSB lab struggled to download the data on the unit’s SD card.  Appareo subsequently informed the NTSB that an early standard of SD cards used had failed after c 1800 hours of data recording (and c 20% less flying hours).

Appareo had not formally issued a service bulletin or any guidance to regarding SD cards expecting that routine Flight Data Monitoring (FDM) and the ultimate backstop of the annual inspection would prompt card changes if required.

According to the Director of Maintenance (DOM) for the operator, the original intention was to have annual inspections that verified the functionality of the SD card and the mechanics were supposed to upload the information to Appareo software so the successful capture of flights could be verified. The operator then stated that mechanics and pilots did not have access to the Appareo software for reviewing the data, and were then instructed to perform a “visual inspection” and have “base pilots rotate the SD cards to [their] aviation safety officer for review and monitoring.” The DOM went on to explain that this particular process had no oversight and the inspections of the SD cards and subsequent verification of recorded flight data “quickly fell apart.”

It’s not clear if the limited availability of the Appareo software was a deliberate plan for data protection purposes.  It does appear from the statement above that routine FDM was not being done, but it is clear that the operator’s maintenance programme was not following the ICA for the V1000 unit.

Fortunately the V1000 also records data to an internal memory, sealed inside a thick aluminium case, and wrapped in a fire-blanket.  This would not meet the stringent crash protection requirements for Flight Data Recorders (FDRs) but does provide a degree of crash resistance.

FAA guidance for helicopter instrument approaches allows a reduction of the Category A visibility by 1/2, but in no case less than 1/4 statute mile or 1,200 ft runway visual range (RVR). The approach can be initiated at any speed up to the highest approach category authorized; however, the speed on the final approach segment must be reduced to the Category A speed of less than 90 knots before the missed approach point in order to apply the visibility reduction.

The FAA describes some hazards when the ground or horizon are obscured.  The NTSB note to that

The vestibular sense (motion sensing by the inner ear) in particular can and will confuse the pilot. Because of inertia, the sensory areas of the inner ear cannot detect slight changes in airplane attitude, nor can they accurately sense attitude changes that occur at a uniform rate over a period of time. On the other hand, false sensations are often generated, leading the pilot to believe the attitude of the airplane has changed when, in fact, it has not. These false sensations result in the pilot experiencing spatial disorientation.

At the time the operator advertised that:

Our fly-by-instrument certified pilots can take to the air when weather has grounded other pilots. 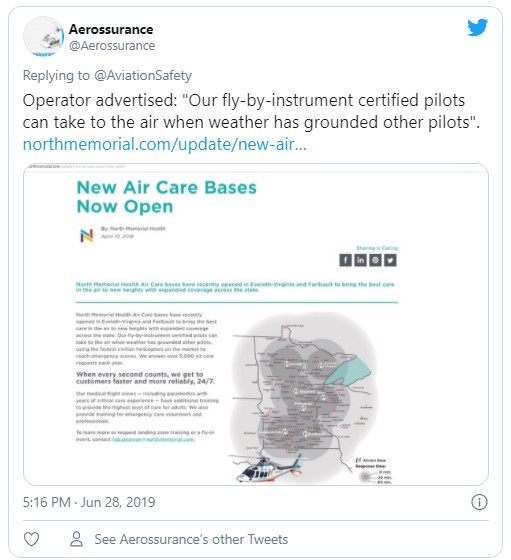 This boast, wisely, no longer features on their website.

The operator’s flight training and currency programs were all conducted inflight, as the only A109 simulator was based in Italy.

Following a September 2016 accident that involved a loss of control during a missed approach in night IMC conditions, the operator started construction of a flight training device (FTD) for instrument procedures using an actual A109S cockpit. The FTD was not yet certified or in use at the time of the accident.

The dark night conditions at the rural airport resulted in little to no visual references during the pilot’s transition to landing and the attempted missed approach. It is likely that the pilot became spatially disoriented, which led to the excessive pitch attitude, slow airspeed, his failure to recognize and arrest the right yaw, and the subsequent loss of control.

The NTSB do not comment on the previous accident.

The pilot’s spatial disorientation during an instrument approach in dark night instrument meteorological conditions, which resulted in a loss of control and subsequent impact with terrain.

Following the accident, the operator: 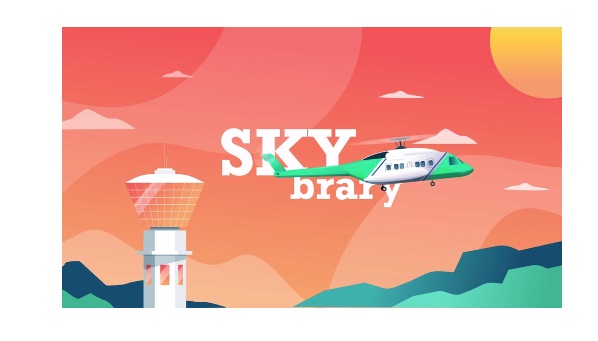