On 1 August 2019 Rega HEMS Airbus Helicopters H145 (BK117D2) HB-ZQM departed the Rega base in St. Gallen at 1830 for a tasking in Walzenhausen on the Austrian border.  On board were a pilot, a paramedic / Technical Crew Member (TCM) and doctor.

The Swiss Safety Investigation Board (SUST) explain in their safety investigation report (issued 24 August 2020 in German) that:

During the flight, the pilot and the TCM analysed the obstacle situation at the planned location with the help of the on-board navigation device and the Electronic Flight Bag (EFB). They registered electricity and telephone lines that reached a height of less than 25 m above ground.

An employee of the ground-based rescue service was at the scene and instructed the crew on the landing. During the approach, which took place in the direction of a fork in the road (see point 1), the crew sighted the telephone line. When the helicopter was on its final approach, the rotor downdraft (downwash) the lid of a grit container…

Rega H145 HB-ZQM: View of the deployment site in the approach direction (west-south-west viewing direction), shown in Google StreetView. The masts of the telephone line and the telephone cable (red lines), the grit container (dark blue circle) and the first landing place at the fork in the road (1) and the second landing place at the road curve (2) are highlighted. The yellow arrow indicates roughly the point where a main rotor blade collided with the cable. (Credit: SUST)

The crew noticed this, whereupon the pilot aborted the approach and started a slow reverse flight. He then hovered the helicopter at a safe distance until the rescue worker on the ground, who had been informed accordingly by the pilot via radio, had secured the lid.

In this phase, the pilot assessed the cable situation at the slightly higher road curve (see point 2) and came to the conclusion that the telephone line seemed to span the meadow diagonally behind the curve.

The second approach then took place at the fork in the road (point 1). The pilot briefly touched down the helicopter on the road, but found that the landing area was too steep and that the helicopter had therefore tilted too far back around its transverse axis to be able to switch off the engines. He immediately took off the helicopter and headed for the slightly higher road curve (point 2), where the road was a little less inclined. During this maneuver, the TCM observed the slope rising to the left of the helicopter as well the display of the rear view camera on the multifunction screen.

Shortly before touchdown, in the direction of flight of the helicopter, a main rotor blade touched the telephone line running across the curve of the road, whereupon it was cut.

The doctor who was sitting in the cabin noticed this at the same time as the pilot, who at that moment saw a black cable in front of him in the lower right corner.

Since the pilot noticed neither vibrations nor any impairment of the control system, he flew the helicopter to an open landing site in the Rhine plain about 1.4 km to the northwest and landed there without any further incident.

Examination of the helicopter revealed “traces of wear from black rubber” near the tip of a main rotor blade. There was no evidence of blade structural damage or any other damage to the helicopter. The helicopter was released to service subsequently. 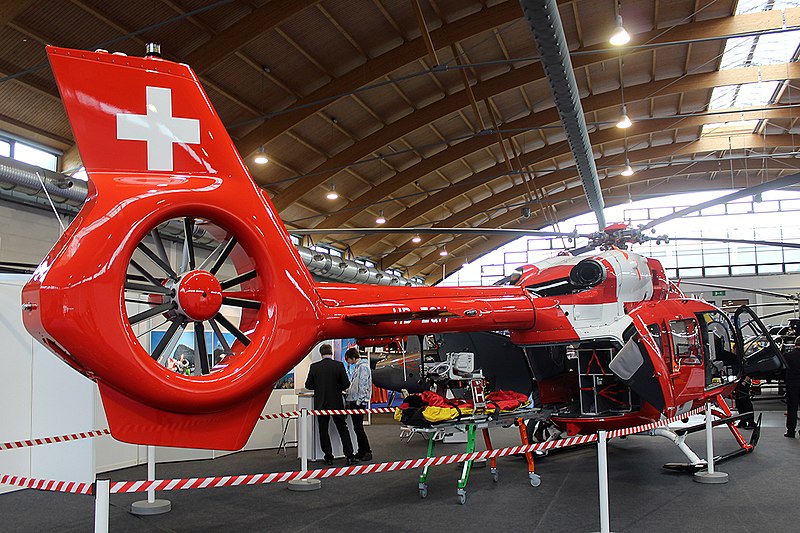 Telephone lines, which often run parallel to streets in order to simplify maintenance work on the line, generally do not reach a height of 25 m above ground. For this reason, such lines are not entered in the official and generally accessible database of aviation obstacles. In the present case, the airline had an extended database that displayed the telephone line in question in the EFB and on the navigation screen in the cockpit.

With the aid of these aids, the crew registered during the overflight to the scene that there were telephone lines in the area of the landing area, which made them aware of the situation (situational awareness) improved. The crew recognized the telephone line with which the helicopter later collided on the first approach to the first landing site.

However, the pilot wrongly assessed the course of the cable as running diagonally across the meadow behind.

Since April 2018, the Swiss Helicopter Association (SHA) “SwissMap Mobile” application, which also shows a large number of obstacles below 25 m above ground, such as power and telephone lines, hay ropes or ski lift cables 5, can also be purchased for non-members.

At the time of the accident, visibility was good with a cloudless sky. The position of the sun was at an azimuth of 274° and an altitude of 21°.

Due to the position of the sun, which is seen in the direction of flight of the helicopter in the front right and in the area of the landscape horizon found, it is also conceivable that the pilot was blinded by the sunlight. The already poor visibility of such thin cables can be made even more difficult.

This made the landing even more complex for a diligent crew. 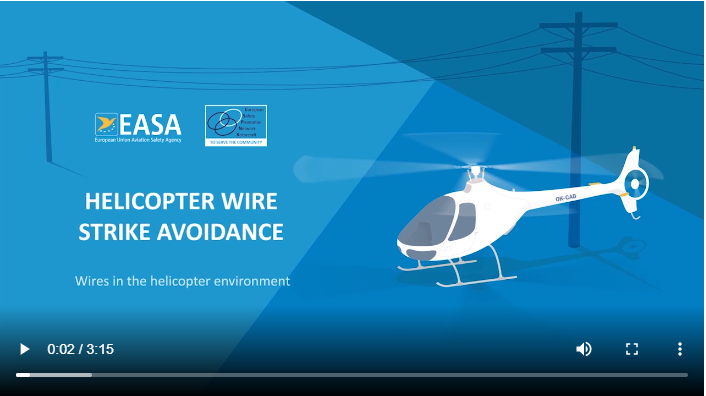