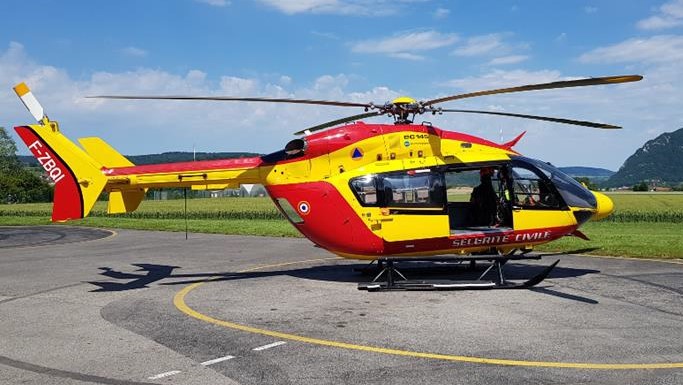 Investigators of the BEA-Etat (BEA-E) explain in their safety investigation report, issued on 7 September 2020 in French only, that the tasking was to rescue two hikers who had got into difficulties in the Goulet du Pontet (Haute-Savoie), at c 4,900 ft amsl.  This was their fourth mission since 0900 that morning, typical for the unit in the summer.  The crew consisted of 4, a pilot, hoist operator and two mountain rescuers (one a first aid trained Gendarme and the other a firefighter).  They were tasked by the local fire and rescue operational centre (known as CODIS) at 1848. 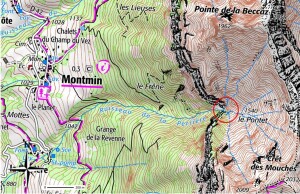 Location of Hikers (Credit: via BEA-E)

The location was “well known to the crew” and the weather was “very good…with clear visibility over 10 kilometres” and a “weak north westerly wind of 5 to 10 kt, gusting 15 kt”.

“…the crew agreed on the choice of the skid support procedure”.  This involved resting a skid on the ground to disembark / embark personnel (example video).  They had used both this and hoisting during the three earlier missions that day.  This technique is quicker and requires less power and so is preferred when it is practical.

The pilot spotted a grassy area suitable for maneuvering, upstream of the hikers. DRAGON 74 performs a first pad support and disembarks the two rescuers. As the helicopter takes off again, the hikers rush towards the rescuers who secure them. By radio, the lead mountain rescuer calls DRAGON 74… Less than a minute passes between the two approaches.

When DRAGON 74 arrived for the second skid support, the crew heard a noise from the blades of the main rotor.

The pilot interrupts his approach, immediately deviates and, while hovering, checks the helicopter parameters. Not noting any particular vibration and the parameters being compliant, the pilot decided to continue the mission and recover the rescuers as well as the hikers by hoist.

After having landed on a field of Montmin, rotor turning, and put down the hikers, DRAGON 74 returns to its base without additional verification. 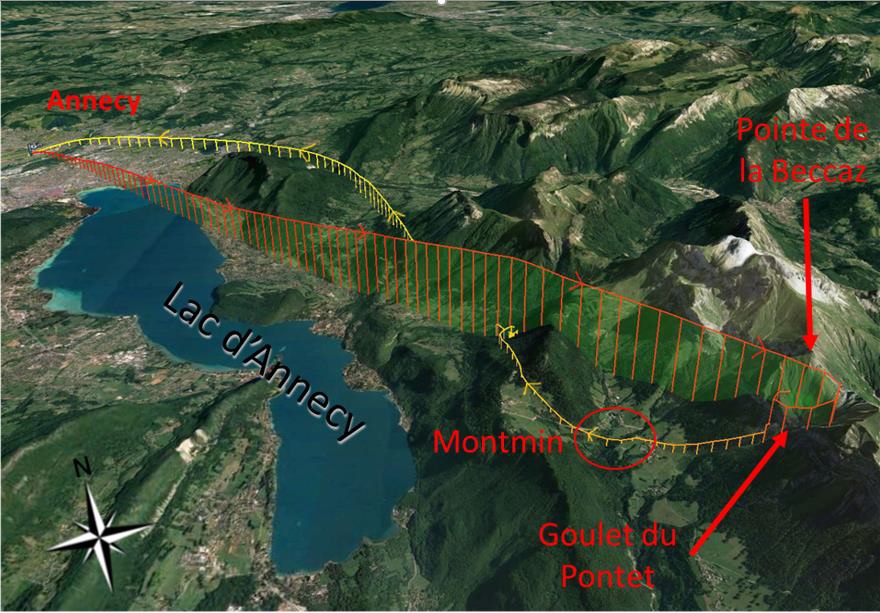 During the post-flight inspection, the crew noticed that the main rotor of the helicopter was damaged. 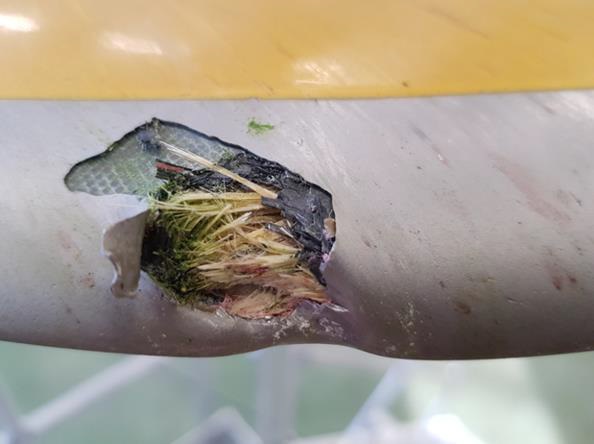 BEA-E comment that the unit did not have a conventional Operations Manual, but a series of overlapping instructions and other documents, which don’t address skid support rescues.

When examined, traces of vegetation were found on all four blades of the main rotor, with the yellow blade suffering a penetration at the leading edge.

The site of the incident was located south of the Pointe de la Beccaz, in the Goulet du Pontet, on a grassy area sloping 45° on the side of the mountain. The area is about fifteen meters long. Two shrubs over two meters are found on the upper part of the area. 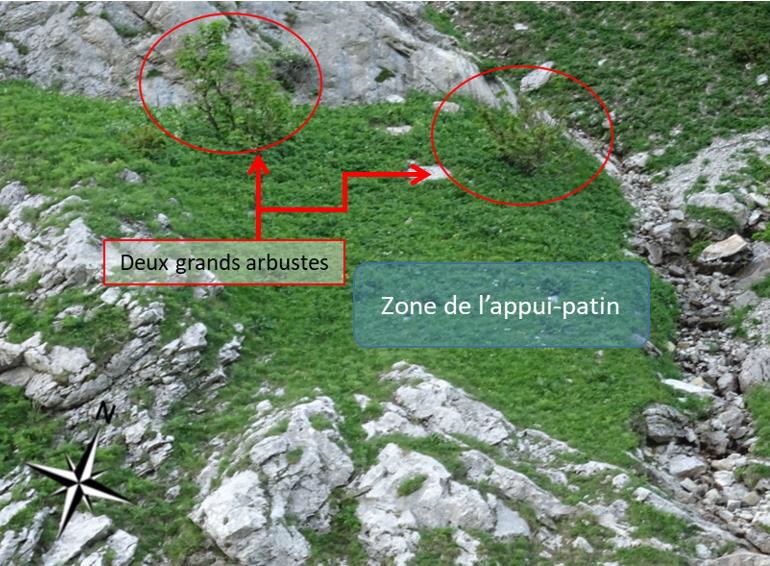 Numerous branches were found damaged but none were actually cut. 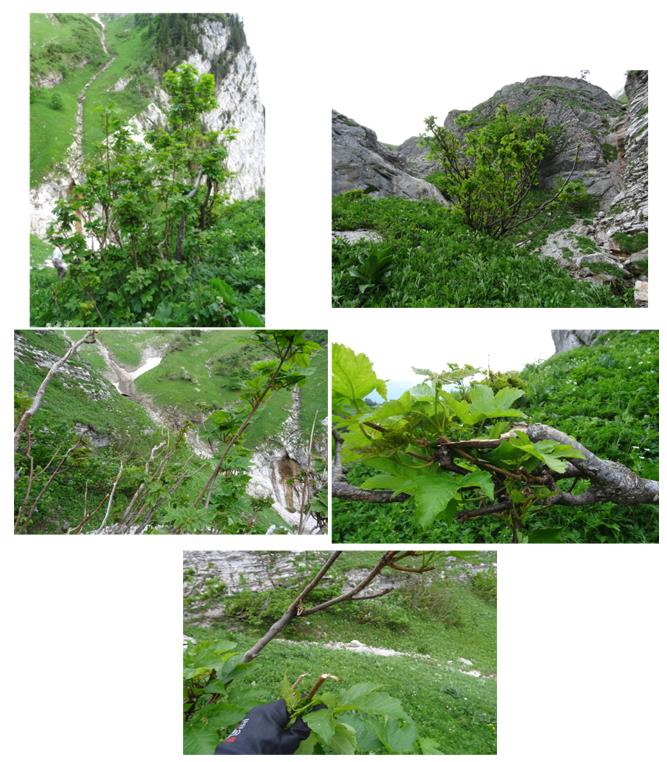 The BEA-E examined recorded data from the aircraft:

At the time of the collision, the rotor rpm remained constant around 102%. The only variation in speed, less than 1%, is attributable to the engine / rotor control and was visible during the entire part of the hover.

The aircraft was subject to Airbus’ maintenance recommendations and was returned to service after a change in main rotor blades.

The yellow blade was subject to more detail examination.

Two samples were taken from its surface. The results of the spectrographic analyses concluded that a green deposit was of plant origin and that the second sample was a piece of composite blade, made of epoxy resin and fiberglass.  The impact therefore exposed the fiberglass that makes up the material of the blade. 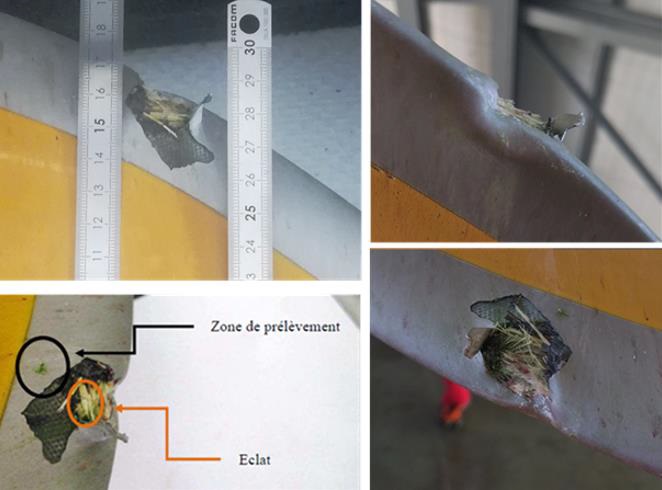 The several composite lay-ups over a few millimetres of depth were damaged by the impact in a 1 x 2 cm area, 15 cm from the blade tip.

BEA-E analysis concluded there was around 1 m clearance from the shrubs.  The hoist operator had a clear view of the vegetation. 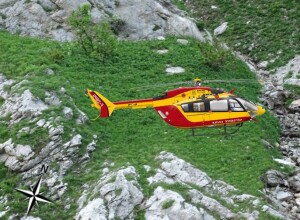 The BEA-E concluded though that there had not been a direct strike on the shrubs.  Analysis of the CVR audio confirmed four impacts, which BEA-E determined were with one branch, penetrating one blade and then contacting the following three. The investigators believe this was consistent with a loose branch on the ground being blow by downwash and entering the main rotor by re-circulation.  They comment that identifying broken foliage on the ground would have been very difficult as there would have been little contrast with the grass. The risk of loose vegetation is also not discussed in Sécurité Civile documentation.

The BEA-E suggest the crew may have been ‘overconfident’ when they made their second approach, especially as the hikers joined the disembarked rescuers very quickly and so the second approach was only shortly after the first skid contract.

The BEA-E explain that the crew suspected the noise indicated a blade strike on the shrubs.  They note the pilot reflected it sounded similar to a previous incident where a survival blanket was blown through the rotors.

Sécurité Civile procedures specify the that:

As soon as a captain has any doubts about the condition of his helicopter (shock perceived in flight, deterioration of flight qualities, bird collision, poor instrument indications, etc.), he is required to land on the nearest appropriate ground, or even land in the field and carry out a careful inspection of his aircraft.

Continuing to complete the hoisting, dropping the hikers off after a short 30-second flight to Montmin and then the 5-minute flight to Annecy all increased the level of risk say the investigators.  The investigators speculate that the crew would have been reluctant to shut the aircraft down at Montmin for fear of the operational challenges if damage was found.

The causes of this event fall within the domain of organizational and human factors.

The crew never considered cutting the flight short or checking the helicopter after the hikers disembarked at Montmin. The underestimation of the risk and the influence of logistics arguments on aviation safety led the pilot to continue his mission, increasing the level of exposure to danger…

The BEA-E recommends that SAR operators “make their helicopter crews aware…of the risks posed by vortices at the end of blades near obstacles and of taking them into account when choosing between the different modes of action”.

They recommend that the Sécurité Civile create an Operations Manual and revise their procedures in relation to:

They also recommend the Sécurité Civile emphasise their existing procedures for after a suspected blade strike.

Other operations of DRAGON 74: Video 1 and Video 2.