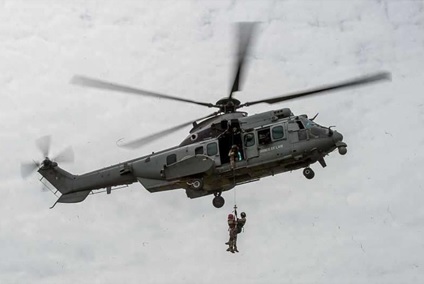 Investigators of the BEA-Etat (BEA-E) explain in their safety investigation report, issued (in French) on 27 April 2021, that on board were a crew of 7 (two pilots, a hoist operator instructor and student, a rescue diver instructor and student, and paramedic).  Twelve hoist exercises had already been carried out.  These had involved a 60-130 ft cable length.  The last exercise involved unwinding 190 ft of cable over sloping ground. 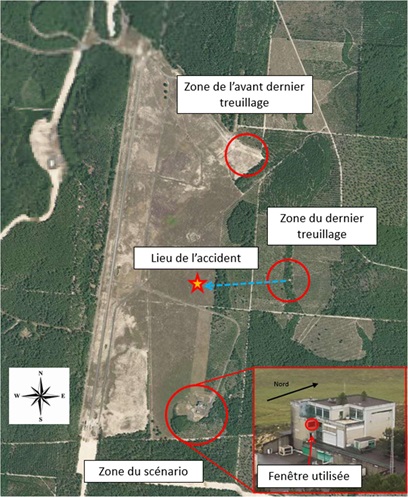 During that exercise the Goodrich Type 76368-240-D variable speed hydraulic hoist jammed on the ascent with two personnel, the student rescue diver and paramedic, 5 m below the helicopter.  The helicopter manoeuvred at 10 knots towards an open area.  While following the emergency checklist, the crew realised the hoist could still pay out cable and so simultaneously started to lower the two stranded personnel.

Tragically, after a couple of seconds, the hoist cable broke and the two fell to the ground from c 40 m.  The helicopter landed nearby to help the casualties After first aid the casualties were evacuated to the Cazaux air base, 8 minutes away. One was declared dead on arrival and the other died overnight in hospital on Bordeaux.

The BEA-E Safety Investigation: Examination of the Goodrich Hoist

On this H225M the primary hoist is hydraulic, but there is also an electric back-up mounted outboard. 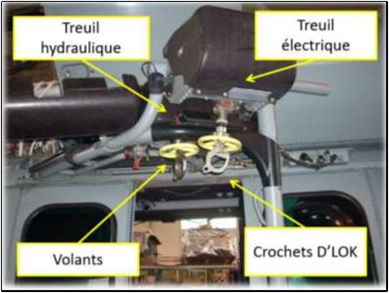 Investigators examined the hydraulic hoist.  The remaining cable was found not to be correctly wound, and the host was contaminated with grease and particles. 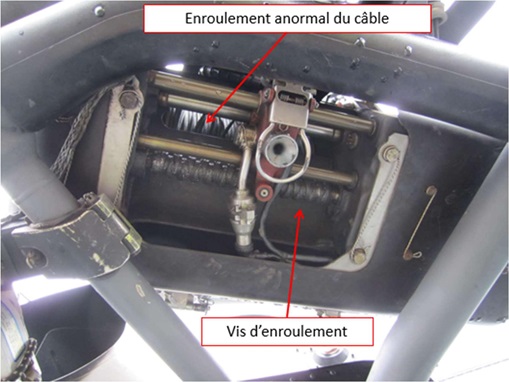 The broken cable was found to be “marked, folded and untwisted” (i.e. the strands had separated) along the upper 1 m of its 20.6  m length.  Other damage was “visible along its entire length”. 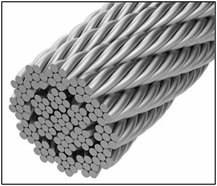 The hoist consists of a hydraulic motor, cable drum, cable & hook, cable brake, cable guide (with a ‘guide finger’ [or ‘shoe’] that translates laterally, driven by a winding screw (or lead screw), to ensure correct cable winding), an extraction device to apply tension to the cable, limit switches, pyrotechnic cutter and a ‘pendant’ hand control unit. 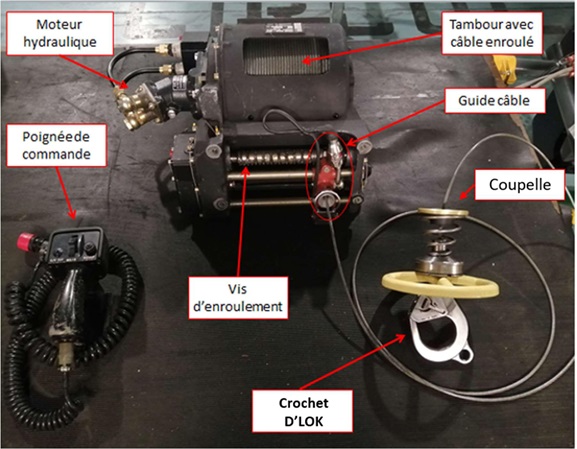 The cable is wound onto the drum in four layers (called ‘rows’ by BEA-E) of 31 to 36 turns each (with the last 8 being ‘dead turns’ that are never unwound). 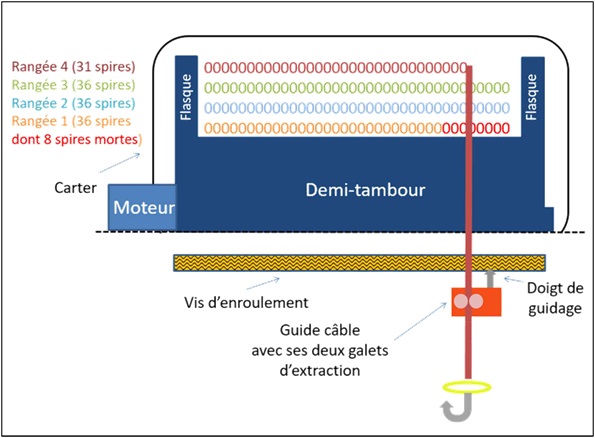 The maximum extension is 75 m.  The BEA-E give examples of the type of damage a cable may suffer: 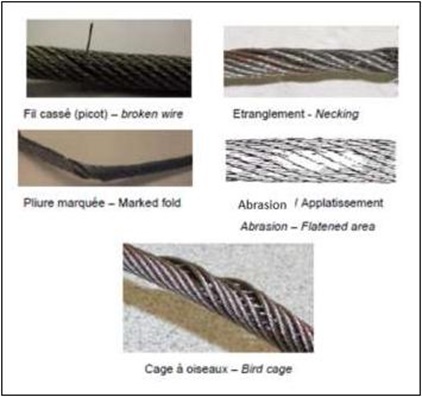 The BEA-E say that upon examination:

The inner face of the hoist housing shows signs of cable friction all around its circumference and about 5 cm on the side opposite the motor.

Part of the flange on the side opposite the motor was almost broken. It separated during their extraction of the cable.  Traces of friction and material transfers from the cable are present on this piece of broken flange.

They also identified a turn of the cable, just a few centimetres before the cable failure, which had looped around the flange.

The BEA-E found the first two layers were correctly wound, but the cable was misaligned in the third layer.

This is at the origin of the traces of friction observed on the casing as well as the passage of a turn on the other side of the flange.

The cable ruptured about 15 cm before the cable had looped over the flange.  Scanning Electron Microscope (SEM) inspections show…

…that the cable was weakened by the rupture of several strands by abrasion on the flange then it broke statically. No damage prior to the event (pitting, corrosion, etc.) was detected. 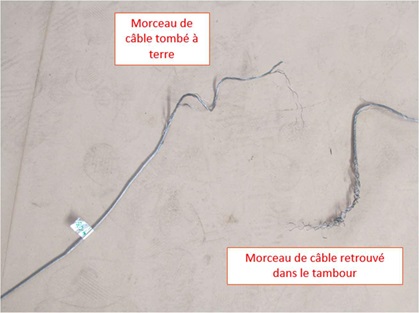 Testing of the cable guide and winding screw revealed that…

The grease used was found to be the specified grade, however:.

Numerous filings (metal particles) were present, mainly on the side opposite the motor. These were aluminium particles from the abrasion of the casing by the cable . There were also grains of sand stuck to the grease on the winding screw assembly. 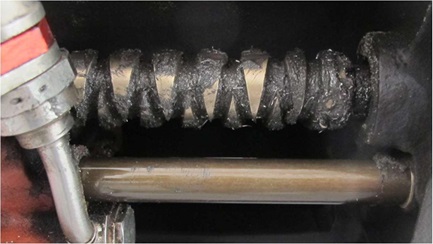 The winding screw itself was examined.  In the illustration below the areas in red have excess material, whereas the areas in green and blue are worn.

The BEA-E found that the turning points at the ends of the screw were worn. The one marked with a black circle above was particularly worn (500 µm) and this is where the cable guide jammed.

Abnormal marks were visible (see below) on two diamonds opposite where the cable guide is positioned.

They look like a mark of tools and cannot have been made while the winch was in operation otherwise they would have been helical. Since the guide finger is in contact with the side and not the top of the winding screw diamonds, these marks have no impact on the operation of the winch. However, they may have contributed to the wear of the guide finger.

The guide finger was worn on both sides, to a maximum of 800 µm on the right side and 500 µm on the left side. The investigators also noted transfers of material from the winding screw to the finger as well as sand encrustation.

The BEA-E then postulated potential technical or operational human/organisational factors.  They don’t however ultimatelty determine which were the most likely. 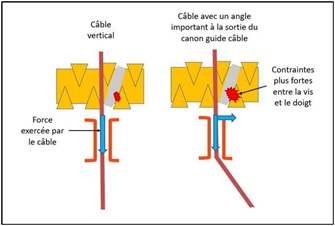 Example of stresses due to an excessive angle of the hoist cable (Credit: BEA-E)

BEA-E then identify a number of potential factors related to crew decision-making when the jam occurred:

Aerossurance is however surprised that in this analysis that the BEA-E don’t discuss inter-hoist transfer, a standard solution to a jammed hoist on helicopters equipped with double hoists.  The concept of fitting two hoists was a specific outcome of the fatal loss of Bristow / HMCG winchman Billy Deacon GC on the Green Lilly on 19 December 1997.  It’s possible that either the student had not trained on this eventuality or that manoeuvring to near-by open ground was seen as a faster solution.

Next, BEA-E identify factors that could have precluded early detection:

The BEA-E also note that while Goodrich was being informed of all failures that occurred in-service, the military “did not always receive feedback” on these nor did they receive feedback on occurrences at other customers.

The hoist cable broke during lowering due to the shearing of several strands of the cable by friction on the edges of the flange on the side opposite the motor. 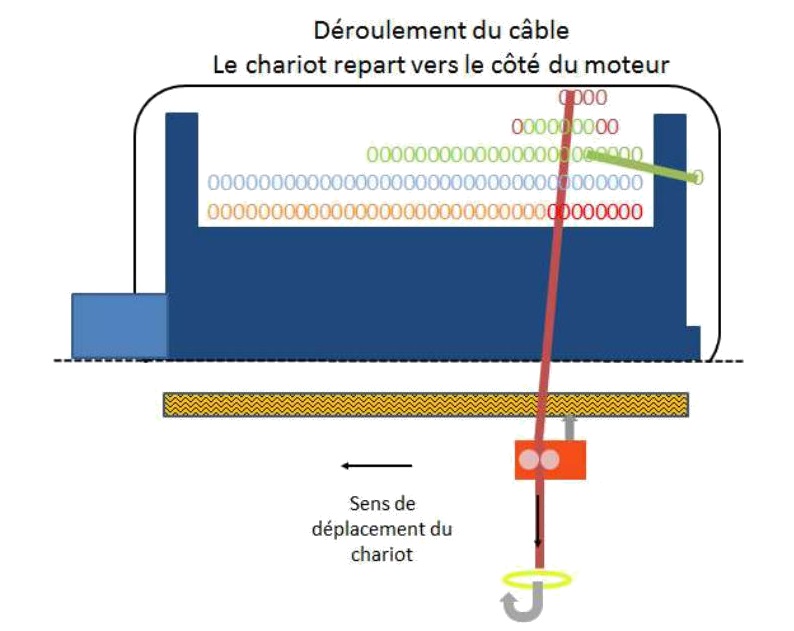 This occurred due to wear on the winding screw and guide finger that allowed a loop of cable to form over the flange.  Contributory factors may have included:

The decision to continuing hoisting cable out may have been influenced by:

UPDATE 12 June 2021: Inspired by this report, Alex Pollitt wrote: Helicopter Hoisting and the Human in the System: Applying the 3Hs to decision-making during helicopter hoist operations

You may also find these Aerossurance articles of interest too: