At night on 22 April 2020 a Leonardo AW139 air ambulance helicopter hoisted paramedics into a remote area near Tumut. New South Wales to attend to bushwalkers who had requested assistance. The Australian Transport Safety Bureau (ATSB) report that shortly after this the paramedics requested that the helicopter assist by illuminating the area.  ATSB do not identify the aircraft registration or the operator.

As the helicopter moved into position, the hoist operator positioned himself to use the hoist downlight for the illumination task. This involved him holding the hoist control pendant in his left hand and reaching for the search light directional control switch on the hoist panel with his right hand. 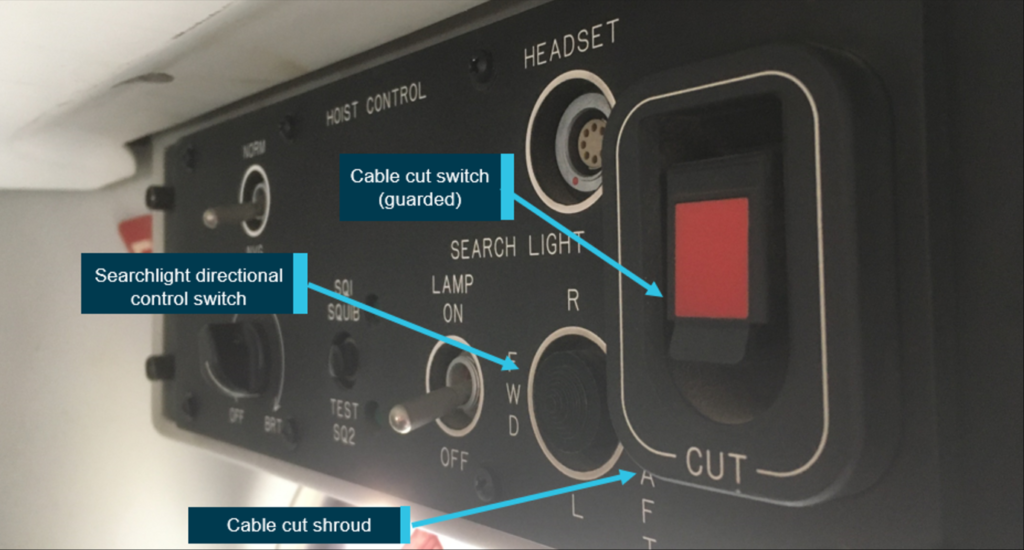 At this moment, the helicopter experienced a gust of wind that disturbed the steady hover and caused the hoist operator to partially lose his balance.

In an attempt to stabilise himself, he held the door with his left hand and his right hand remained on or near the hoist control panel. As he was looking outside, the hoist operator’s gloved hand or wrist inadvertently flicked up the cable cutter guard and depressed the cable cutter switch in one movement, severing the hoist wire and resulting in the hook assembly falling to the ground.

In fact, four years earlier the proximity of the cable cutter guard to the searchlight directional control had has been noted by the operator.  Various procedural controls had been “enacted and/or refreshed at various times” and recorded in the operator’s Safety Management System (SMS).

A Civil Aviation Safety Authority (CASA) approved third party modification introduced with the intent of reducing risk of inadvertent cable cut activation.  This included both a cable cut shroud and restraint of the intercom lead (the latter aspect suggesting an intercom lead snag was an activation method under consideration).  ATSB note that:

This did not completely eliminate the risk, but did provide a measure of design protection.

No detail is given on the design and assessment of this ineffective modification.

The locally modified shroud around the cable cut switch fitted at the time of the incident is illustrated below left.

After the 22 April 2020 NSW incident they issued revised Alert Service Bulletin 139-637 in June 2020 and the European Union Aviation Safety Agency (EASA) made this mandatory through Airworthiness Directive 2020-0131 (promptly effective on 12 June 2020).  It stated:

This condition, if not corrected, could lead to further unintended activation of the hoist cable cutter,
possibly resulting in injury to a human load or to persons on the ground.

…the operator considers that a design relocation of the searchlight control switch would reduce the risk of inadvertent activation to as low as reasonably practicable.

This incident serves as a reminder for all crew members that ergonomic aircraft characteristics may pose a potential hazard to the safe operation of the aircraft or its systems. Identification and communication of such hazards allows safety action to mitigate the associated risk.

The Royal Aeronautical Society (RAeS) has launched the Development of a Strategy to Enhance Human-Centred Design for Maintenance.  Aerossurance‘s Andy Evans  is pleased to have had the chance to participate in this initiative.