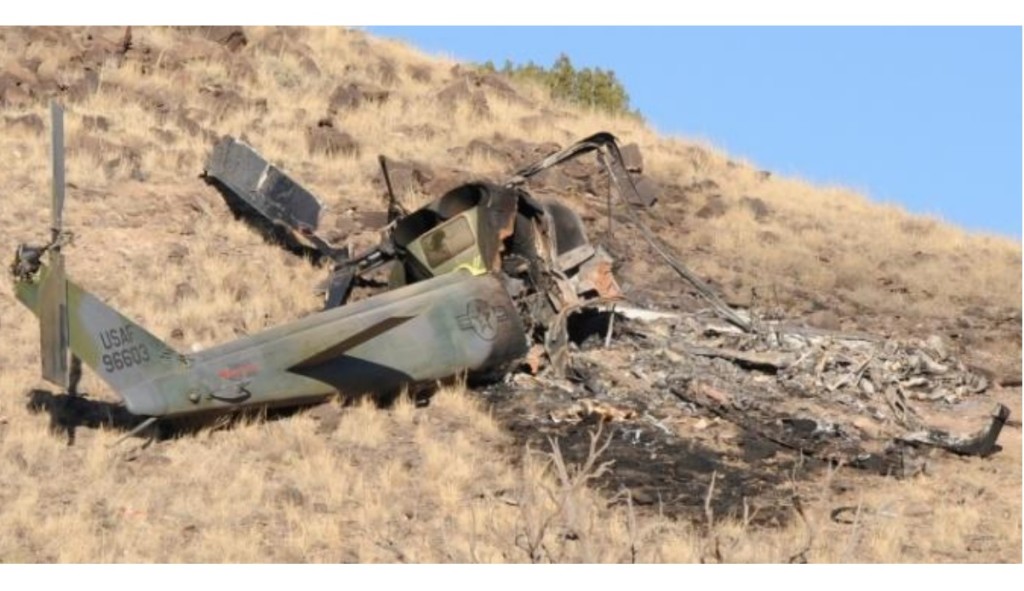 This accident was during an initial instructor flight engineer check ride.  According to the USAF Accident Investigation Board (AIB) report: The training site was at 5382 feet AMSL, c 11ºC  and wind was c 12 kts gusting 20 kts.  The Evaluating Flight Engineer was controlling the up-limit switch on the hoist to simulated a malfunction.  The student Flight Engineer tried several fault finding options.  During this time an undetected aircraft drift forward and left occurred, positioning the aircraft 5 to 10 feet west of a discarded 2060 lbs (934 kg) F-111 escape capsule.  The crew had used this as a landmark at ‘Site 15’ within the Kirtland range.

Once the student Flight Engineer identified the simulated malfunction was caused by activation of the up-limit switch they swiped the other Flight Engineer’s hand away from the switch.  This allowed cable retraction to resume.  The co-pilot however was however still making an input to the pilot’s hoist control switch, as had been requested as part of the fault finding, when the up limit switch was released.  As a result, the hoist cable retracted inadvertently and a rescue device, called a ‘forest penetrator‘, on the end of the hoist cable, snagged on the capsule. 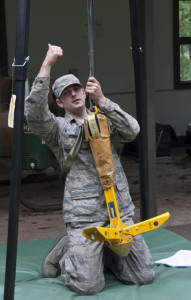 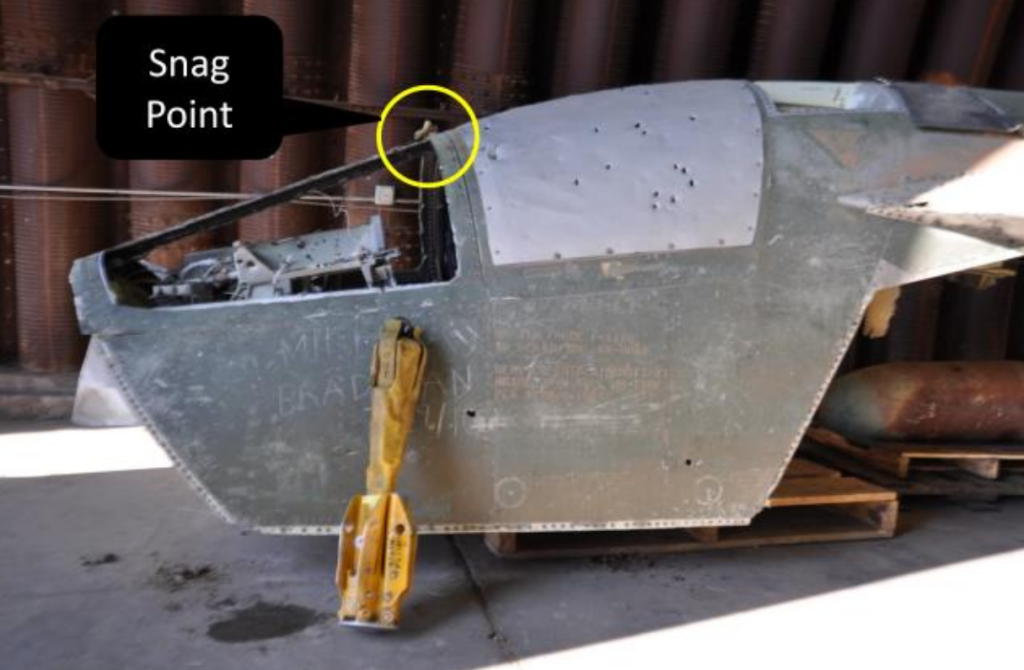 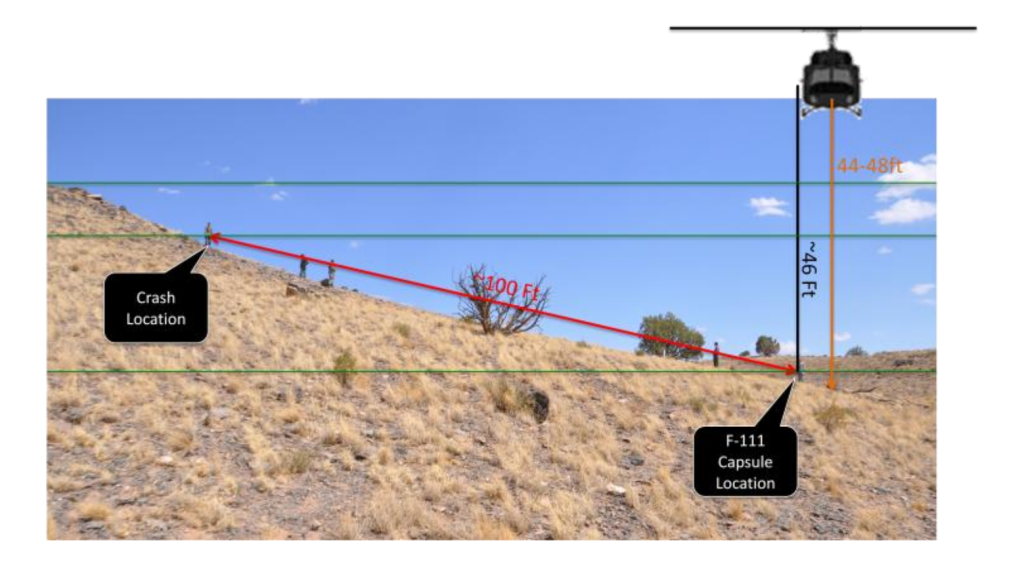 The pilot flying instinctively pulled up on the collective and the helicopter entered a descending right turn while tethered to the capsule and impacted sloping ground just 3-5 seconds after the snag. 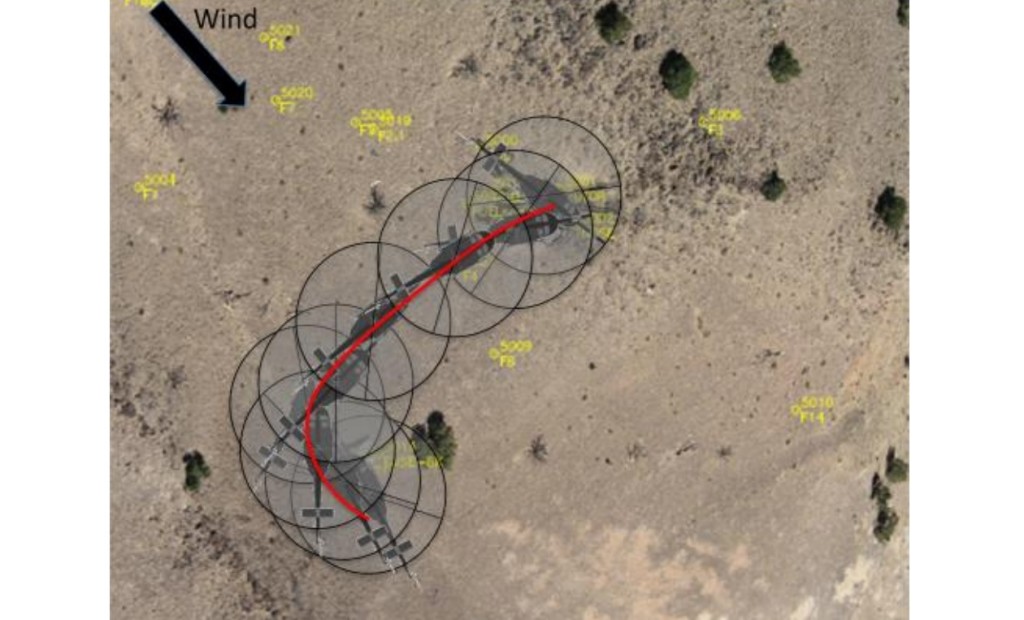 Two crew members attempted to activate the cable cutter but this occurred only factionally before impact.

The crew of four all suffered either minor or no injuries and the aircraft was partial-consumed in a post crash fire after they egressed.  The Integrated Data Acquisition Recorder (IDAR), a type of Flight Data Recorder (FDR) and the Cockpit Voice Recorder (CVR) were both damaged.  No data could be obtained from either of them.

The normal trouble shooting sequence for up-limit switch failure has the pilot try his hoist control switch two steps after the flight engineer has already ensured the up limit switch actuator is not in the up position.

In this case the first steps of the pendant failure troubleshooting sequence were executed followed by the first step for up limit switch failure. It was not confirmed the pilot had release his hoist control. 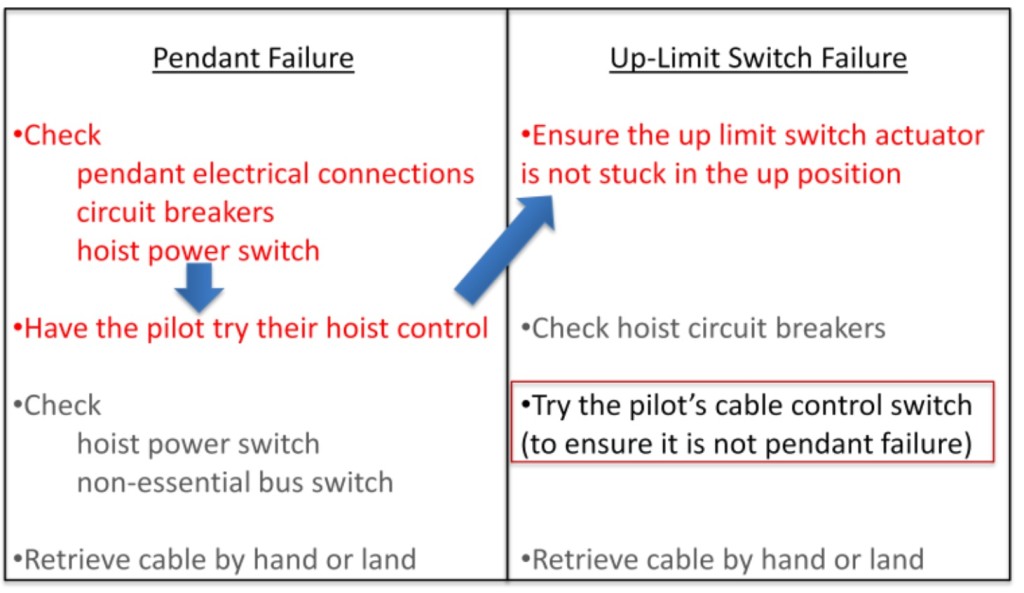 This non-standard sequence resulted in an unanticipated full rate cable retraction, as the pilots’ controls operate at full rate only (unlike the variable rate from the hoist operators pendant).

The investigators applied the the DoD Human Factors Analysis and Classification System (DoD-HFACS) taxonomy based on the work of Wiegmann and Shappell.  They identified 7 relevant factors:

This is a factor when “supervision authorizes a mission or mission element that is unnecessarily hazardous without sufficient cause or need”:

The F-111 capsule had been on Site 15 for over a decade. At one point aluminum sheeting covered all the openings, but several panel coverings were missing at the time of the mishap. Without these panels, the capsule was an entanglement hazard. Previous site surveys noted the F-111 capsule’s presence.  Multiple members in the 512 RQS verified that the capsule was a frequently-used reference point for operations.  (The valuator Flight Engineer] selected an aim point for the hoist approximately 10 to 15 feet from the capsule.

This is a factor when “the individual [sic] is focusing all conscious attention on a limited number of environmental cues to the exclusion of others of a subjectively equal or higher or more immediate priority, leading to an unsafe situation. This may be described as a tight focus of attention that leads to the exclusion of comprehensive situational information.”

The Flight Engineer is responsible for clearing the aircraft of obstacles on the side and rear, directing the pilots’ inputs for aircraft position and altitude, and monitoring the hoist during its operation.  [The Flight Engineer undergoing the check ride] channelized his attention on troubleshooting the hoist malfunction. [The Evaluator FE] was focused on his student’s actions.  Due to [their] channelized attentions, neither initially noticed the aircraft drifting or the hoist cable retracting and lifting the penetrator.

This is a factor when “crew or team members failed to monitor, assist or back-up each other’s actions and decisions”.

Since [the Evaluator FE] was sitting and [not]standing over [the Student], he was unable to visually monitor the forest penetrator. This placed him in a position where he could not quickly recognize and correct the impending unsafe situation.

This is a factor when “correctly communicated information is misunderstood, misinterpreted or disregarded.

Both Flight engineers state a “stop up” call was clearly communicated by [the Evaluator FE].  The pilots did not hear a stop up call.

This is a factor when “information and instructions provided to individuals, crews, or teams were insufficient, or participants failed to discuss contingencies and strategies to cope with contingencies”.

The aircraft commander did not attend the portion of the briefing that related to this exercise.  The AIB highlight that while the commander “was fully aware of how to cope with those contingencies, his attendance at that brief was expected and required”.

This is a factor when an “individual’s movements inadvertently activate or deactivate equipment, controls or switches when there is no intent to operate the control or device. This action may be noticed or unnoticed by the individual”.

The AIB point to the co-pilot’s inadvertent hoist control input.

Our Observations on the HFACS Analysis

Its odd the non-standard procedure is not explicitly coded nor the factors behind the unnoticed drift or the failure to cut the cable.  This demonstrates that just because an appropriate tool is used it doesn’t mean the analysis is rigorous.