The Aviation Safety Council (ASC) of Taiwan has issued its investigation report (in Chinese apart from an Executive Summary) into a fatal Survivable Water Impact (SWI) accident on 11 March 2016 involving National Airborne Service Corps (NASC) Airbus Helicopters AS365N3 Dauphin NA-107 during a transport hoist mission (shown in the video below). 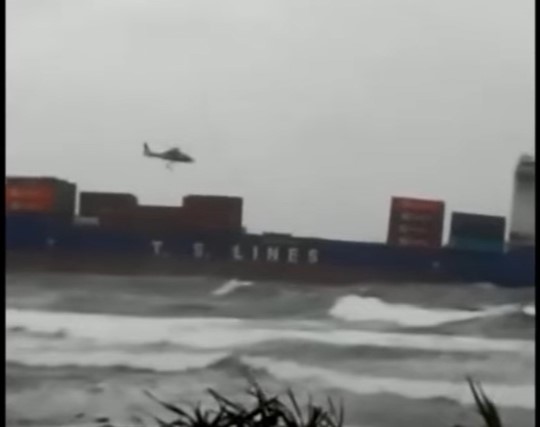 On board were two pilots, one aircrew ‘crew chief’ and two Coast Guard Administration (‘CGA-SSC’) personnel to be transferred to a grounded cargo ship.

On the day of the occurrence, at 1045 Taipei local time the aircraft successfully completed a first …transport mission [to the ship] and returned to Taipei Songshan Airport. After receiving the order for [a] return mission notice at noon, the flight crew did a crew briefing at 1237 and decided to…perform personnel hoisting (executed one person at a time and two times per [flight]). After arriving above the grounded cargo ship, the aircraft circled the cargo ship in clockwise direction…and began to approach the deck of the cargo ship. 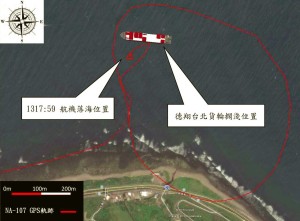 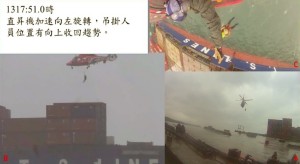 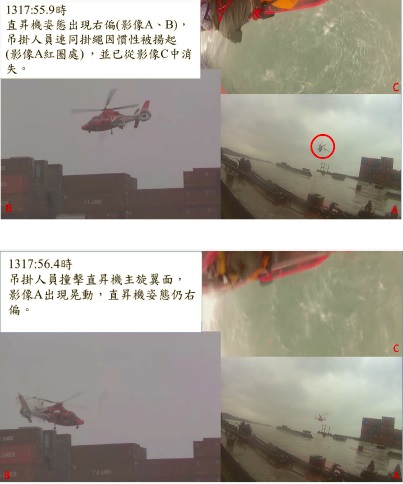 The helicopter was destroyed. 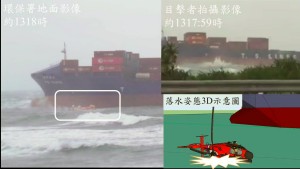 The aircraft commander’s cause of death was abdominal bleeding and drowning and the hoist passenger were killed upon after the main rotor blade strike.  The other occupants sustaining serious injuries.

The helicopter’s emergency flotation system was deployed but the aircraft impacted on its right side.  The front right bag did not inflate due to impact damage.  The internal cabin life raft was not deployed.  The three survivors all escaped underwater from the capsized helicopter and clung to the belly until rescued.  The passengers were not equipped with life jackets and the commander had a non-issue ‘lightweight’ life jacket.  Sea temperatures at that time of year are typically 20°C.  The survivors were rescued within an hour. 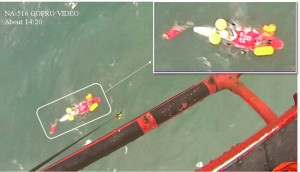 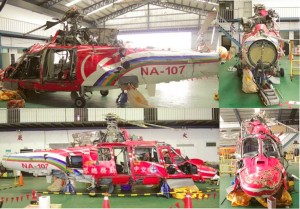 The aircraft was not fitted with a Flight Data Recorder (FDR) or a Vibration Health Monitoring (VHM) / Health and Usage Monitoring System (HUMS). 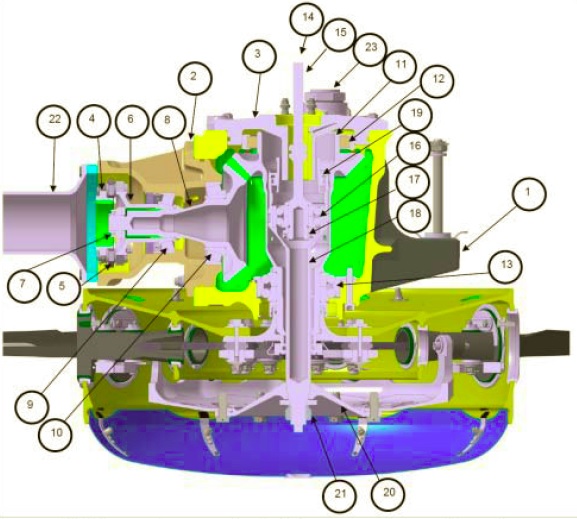 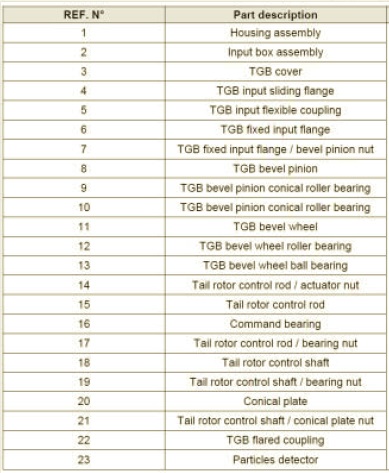 The fenestron control rod double bearing (item 17) was subject periodic inspection in accordance with the Alert Service Bulletin AS365-05.00.61R4 (EASA Airworthiness Directive 2012-0170R2), which had evolved after a couple of prior loss of yaw control events (and 8 prior degraded bearings in total). 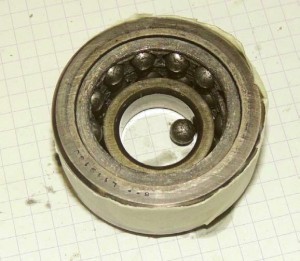 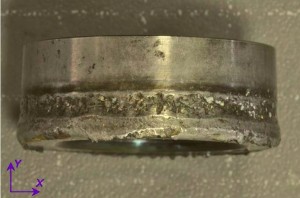 Wear of the SKF manufactured bearing continued and eventually led to a loss of tail rotor pitch control after the inner race retaining shoulder rapidly deteriorated. 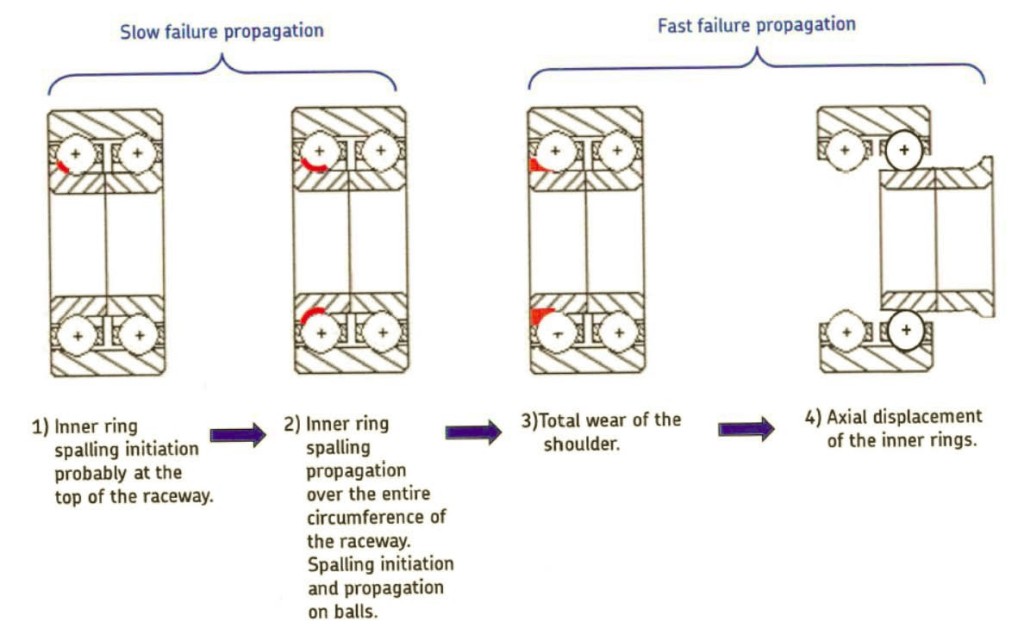 Five of the twelve ball bearings on one side had been released (all were undersized due to wear). Laboratory examination confirmed the bearing had been manufactured to drawing specifications. The ASC say:

The maintenance personnel did not detect the bearing was worn, the tactile/sensitive manual axial play check is mainly based on the judgement of the operator and therefore subjective to detect manually.

The ASC do however note that:

The ASC report is unclear but this appears to be due to usage assumptions being used for forecasting that did not reflect actual usage.  The ASC do also say:

ASB 01.00.67 R1 (made mandatory by EASA AD 2016-0097), was issued by the manufacturer in May 2016.  A subsequent AD was issued the following year (AD 2017-0007). The ASC note that due to the expense, simulators were not being routinely used by NASC crew.  They cite the safety benefit of simulators by referencing a European Helicopter Safety Team (EHEST) leaflet from 2013. The ASC also observe:

The search and rescue vessel did not implement the on scene commander dispatch principles; an identical communication frequency was not used; and when communication was unsuccessful, the aircraft did not establish indirect contact through notifying the affiliated service command center. The scramble nets on the sides of the Coast Guard Administration search and rescue vessel are suitable for physically capable survivors and are unsuitable for the nearly disabled. The national law or regulation has not mandated the installation of flight recorders on the public aircraft.

The ASC made 14 safety recommendations.

Note: This article is based on translation from Chinese of the ASC Final Report.  Readers needing authoritative data should consult / translate the Chinese language Final Report directly.

UPDATE 19 February 2018: Meanwhile the salvage of the ship by SMIT Salvage is discussed: Here’s How SMIT Salvage Removed the Grounded TS Taipei in Taiwan

Aerossurance is also pleased to sponsor RAeS HFG:E conference at Cranfield University on 9 May 2017, on the topic of Staying Alert: Managing Fatigue in Maintenance.  This event will feature presentations and interactive workshop sessions.