Contact was lost with the helicopter approximately 81 seconds after take off as it crashed into the sea.  The 6 persons on board (two flight crew, one rear crew, a medical passenger, the patient and a family member) were killed. 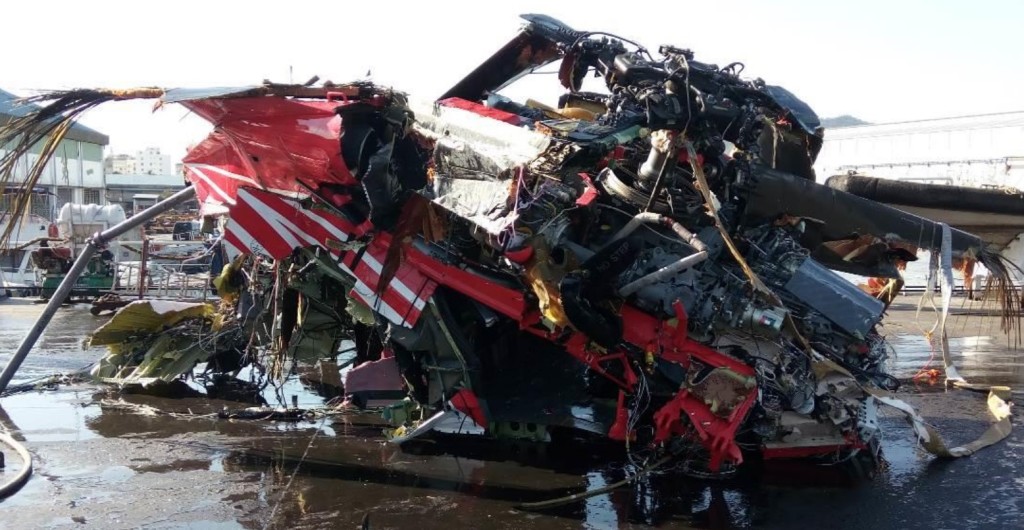 In their safety investigation report (issued on 24 September 2019 and only available in full in Chinese) the Taiwan Transportation Safety Board (TTSB), which recently replaced the Aviation Safety Council (ASC) of Taiwan, explain that the aircraft had displayed ‘FD COUPLE FAIL’ and ‘FLT DIR FAIL’ warning captions on the outbound flight to Lanyu.  The crew did not discuss these and they extinguished before landing (at 23:38 LT).  The crew did a briefing on the take off during a quick turnaround, departing at 23:48 LT. 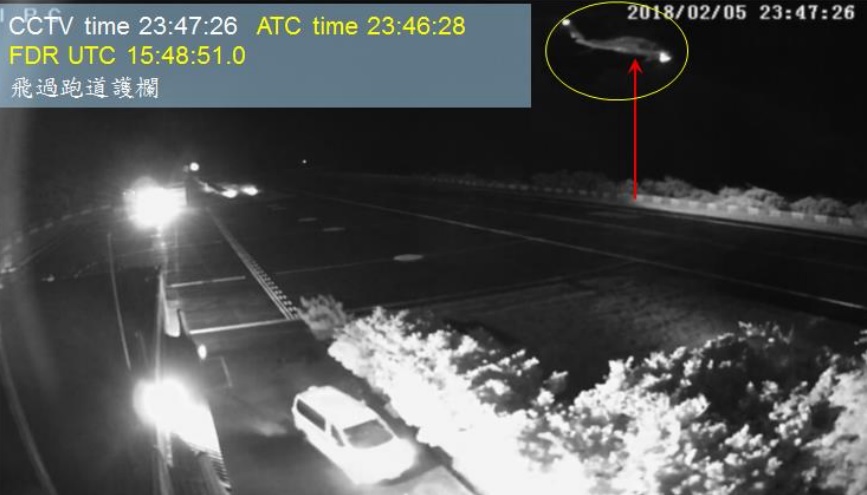 The environment featured ‘black-hole’ conditions.  These conditions “typically occur over water or over dark, featureless terrain where the only visual stimuli are lights located on and/or near the airport or landing zone”.  They are conducive to spatial disorientation.

The  ‘FD COUPLE FAIL’ and ‘FLT DIR FAIL’ warnings briefly reappeared about 19 seconds into the flight and again were not discussed before they extinguished again after 3 seconds. It appears (based on our translation from Chinese) that an airspeed hold autopilot mode was engaged.  The aircraft was now climbing at around 95 knots.  The helicopter encountered an increasing tailwind about 23 seconds after taking off, that reached 40 knots.  The crew mention windshear and turbulence.   It appears the autopilot dropped out in the turbulence but the Pilot Monitoring commented “Now is a positive rate of climb, it doesn’t matter”.  However, the TTSB state that while the aircraft was now at 197 ft and 106 knots 44 seconds after take off, the rate of climb had dropped to 192 ft/min. 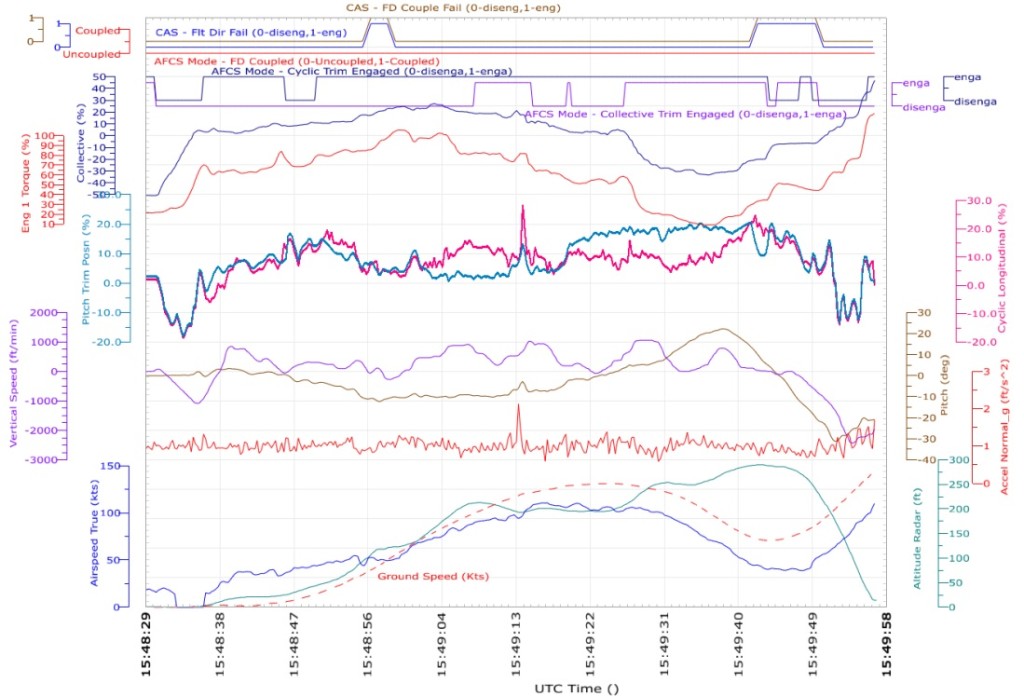 Furthermore the nose starts to pitch up (peaking at 22.2º), speed decreases and climb rate slows and then the aircraft starts to descend.  At 78 seconds after take off the aircraft is at 133 ft but the rate of descent is now 2.100 ft/min.  Moments after the CVR/FDR stop recording. 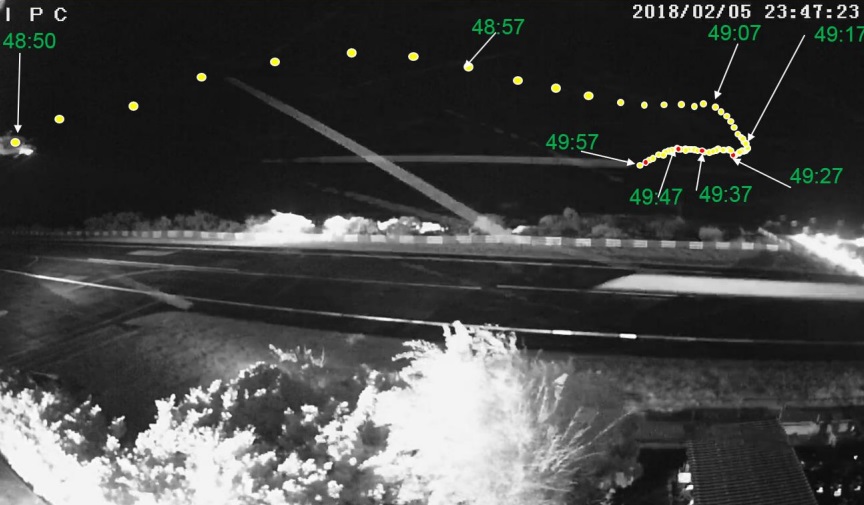 The aircraft impacted water that was 1000m deep.

The aircraft was not equipped with an Emergency Flotation System (EFS).

The TTSB note that the NASC “do not provide the complete Standard Operating Procedures (SOPs)” nor did the flight crew totally follow the SOPs that were in place.  Additionally:

The NASC failed to plan the appropriate training of the flight crews. [Specifically they] did not properly arrange the training resources of the UH-60M aircraft, and did not plan the suitable ground course for the advanced models.  [T]raining hours of the simulators were insufficient [too].  The NASC does not define the minimum requirements related to night flight and instrument flight time, has no specific complete training material for Crew Resource Management [CRM] training and and did not define the weather standards for night EMS…

The flight crew’s threat management, situation awareness, communication and decision-making capabilities as well as the understanding of the aircraft system were not sufficient. They did not choose the appropriate takeoff mode at takeoff under the night circumstance and unsteady wind condition.

During the take-off process, [the helicopter] failed to maintain a safe climbing attitude and speed, and in the event of turbulent flow, it was not possible to immediately interpret the aircraft attitude and maintain the control correctly, and may [have been] accompanied by the phenomenon of space disorientation.

Finally, when the Pilot Flying pitched down the aircraft at low altitude to correct the low airspeed, both of the flight crew were not paying attention to the low altitude, resulted in the aircraft controlled flight into the sea.

The TTSB made 7 safety recommendations:

To the National Airborne Service Corps, Ministry of the Interior

To Civil Aeronautics Administration, Ministry of Transportation and Communications:

The TTSB refer to the Degraded Visual Environment (DVE) section of EHEST Leaflet HE 1 Safety Considerations:

We have previously discussed these night accidents:

We have discussed helicopter automation previously:

Certain aspects of this flight are reminiscent of the Transportation Safety Board (TSB) of Canada report into a serious incident where Sikorsky S-92A C-GQCH where the helicopter descended to within 38ft of the sea on take off offshore.  Another S-92A serious incident off Nova Scotia, which occured on approach, is also now under investigation by TSB Canada:

On 24 July 2019 , a Sikorsky S-92 helicopter operated by Canadian Helicopters Offshore was conducting a flight between Stanfield/Halifax International airport (CYHZ) and the Thebaud gas field platform southwest of Sable Island, NS, with 2 crew and 11 passengers on board when it experienced a drop in altitude while approaching the platform. The helicopter pilots elected to return to CYHZ, where a landing was conducted without further incident. No injuries were reported.

We have also written about: