US Police Helicopter Night CFIT: Is Your Journey Really Necessary?

On 27 March 2014, at 0147 local time, ex-military Bell OH-58A, N497E, operated by, the Kern County Sheriff’s Office (KCSO) collided with terrain near Tehachapi, California.  The three occupants were uninjured, although the helicopter was substantially damaged.

The US National Transportation Safety Board (NTSB) say in their report that the flight commenced at 0121 to convey a police dog that had been shot in the leg three hours earlier the 87 miles to Lancaster for treatment as “the local veterinarian could not perform treatment due to the nature of the dog’s injuries”.

The decision to task the helicopter was made at the “management level at the Incident Command Post” according to a statement by the Sheriff’s Office to the local press.

The NTSB say the pilot (the chief flight instructor for the Air Support Unit [ASU]) had gone to sleep at 2130 for the three previous nights, and woken at 0530 on all but that day.  He was on duty from 0800 to 1600 on both prior days. He was awakened that day by a phone call at 0015 calling him in for the flight and arrived at the ASU HQ in Bakersfield at 0100.  He:

At 0120, they loaded the dog into the rear left footwell, along with the K-9 Division Chief who was seated in the rear right seat. Both the pilot and the [Tactical Flight Officer] TFO were wearing Night Vision Goggles (NVG’s) throughout the flight.

The departure was uneventful, but as they approached Tehachapi they encountered light rain, strong winds, and low clouds.

The pilot decided to proceed, and wanted to see if Sand Canyon, east of Tehachapi, was passable. However, once they got beyond the lights of the city, he lost visual reference after flying into what he thought was clouds. He reported flying about 500 feet above ground level (agl) at that time, and was concerned that returning might cause them to collide with wind turbines and other obstacles in the area.

The route was flanked by wind turbine-covered peaks.  The pilot elected to slow the helicopter and initiate a gradual descent. However he wasn’t in cloud.  The windshield had misted up due to a water leak.  This limited the effectiveness of NVGs.

During the descent, the TFO realized that the windshield had fogged up because he could still see out of the side window, and the pilot turned on the de-mister…and the TFO perceived that the helicopter was now performing gradual S-turns over the highway. He did not get the sense that they were descending…

A few seconds later he [the TFO] looked out of the right window, and although he could not sense movement, they appeared to be rapidly descending. They transitioned over the eastbound lanes of the highway, and he immediately called for the pilot to pull up, however, a few seconds later the helicopter struck the ground…bounced back into the air, and rotated about 180 degrees.

The skids having been spread about 2 feet beyond their normal stance, the FLIR and searchlight were both disabled and the tailskid appeared to have struck the ground. 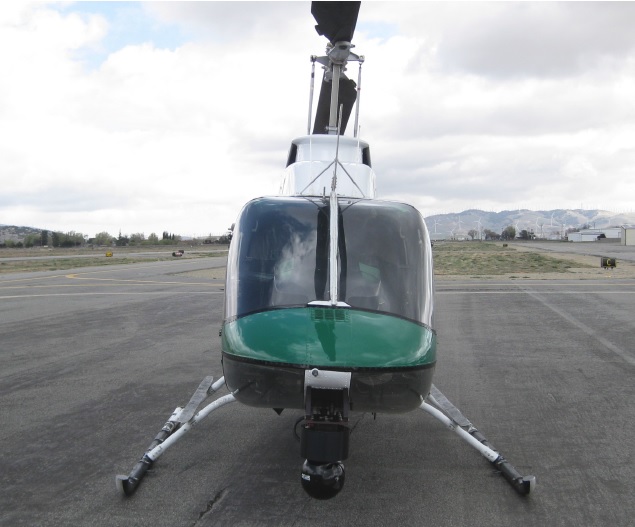 The aircraft had a radar altimeter which may have provided some warning but the audible and visual alerts were turned off at the time of the accident.  The pilot stated that not setting it for this flight was:

…an oversight, and that the urgency of the mission could have contributed to this. He further stated that complacency was a possible factor due to the excellent situational awareness typically provided by NVG’s. He stated that setting the radar altimeter is not a checklist item because it is mission specific [e.g. SAR], but that it should be added to the checklist, possibly in the form of “set radar altimeter trigger as needed.”

According to the operations manual, the ASU was managed by an officer-in-charge (OIC), with training scheduling, oversight, and planning performed by the chief flight instructor. According to the manual, a position of Safety Officer had been created to “Establish a safety manual, safety practices, and to provide recommendations for the OIC regarding safety items.”

However, the OIC revealed that a Safety Officer had not been assigned… There was no formal safety management system (SMS) in place beyond verbal and written discrepancy reports to the OIC and chief flight instructor.

According to the pilot, there was no specific risk assessment procedure prior to flight, primarily because most flights are routine in nature.

The pilot’s decision to attempt a mission at night with known en route weather conditions below operating minimums, likely due to self-induced pressure, and then continue flight beyond the alternate landing airport as weather conditions deteriorated, which resulted in the pilot experiencing spatial disorientation.

Contributing to the accident say the NTSB were:

The police dog did received emergency surgery, though not in Lancaster because the vet there was actually away on leave(!), and happily returned to duty two months later.  The helicopter was repaired at a cost of $240,000. Once the NTSB report was published the local press were critical:

In the days after the crash, the Sheriff’s Office issued press releases saying “unexpected” bad weather forced the helicopter to make a “hard landing” because of “diminished visibility.” And that there was only “minor damage” to the aircraft.  All of which is so inaccurate it borders on misleading.

…people are people. Emotions kick in.  That’s why formal safety management systems and cold, logical “go/no go” risk assessments are necessary. And, I say, that’s on the Sheriff’s Office, not the flight crew.

In June 2014 we wrote an article, Going Above and Beyond in Helicopter Safety, about a visit by Christopher Hart, then Acting Chairman of the NTSB the New Mexico State Police (NMSP). In 2009 the NMSP’s Special Operation Aircraft Section lost A109E N606SP in a fatal accident taking off from a remote, mountainous landing site in dark (moonless) night, windy, instrument meteorological conditions (IMC) during a SAR mission.  That accident investigation looked deeply at systemic organisational issues and touched on some of the major risk management issues that are relevant to all SAR, HEMS (Helicopter Emergency Medical Service) and similar missions.

In November 2014 NTSB held a board meeting on a loss of control accident in 2013 to an Alaskan State Trooper AS350B3 N911AA engaged in a night SAR mission.  NTSB made a number of findings and recommendations on culture, safety management and risk.

A year ago we also looked at US night HEMS accidents: More US Night HEMS Accidents.  As if to underscore the risk of night, single pilot operations in low specification helicopters, another US EMS helicopter AS350B2 N911GF, was lost at night last week with 4 fatalities.  UPDATE 26 May 2018: The NTSB determined the probable cause in that case to be:

UPDATE 24 October 2019: Another police helicopter, this time in the UK suffered a serious incident: EC135P2+ Loss of NR Control During N2 Adjustment Flight

Aerossurance has extensive air safety management, helicopter operations and accident analysis experience.  For aviation advice you can trust, contact us at: enquiries@aerossurance.com