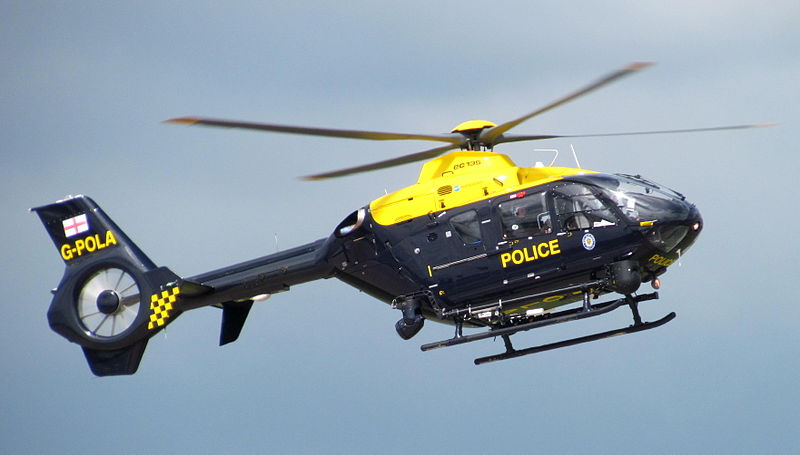 In November 2017, after an engine change, a deferred defect log (DDL) entry restricted the helicopter to 4,500 ft density altitude (DA). To remove this restriction the helicopter required an N2 adjustment flight at 9,500 ft DA.

AAIB explain that the Pratt and Whitney Canada (PWC) PW206B2 powered EC135P2 has a ‘cross-talk’ capability between the two engine Full Authority Digital Engine Control (FADEC) units and so it is possible for one adjuster to set N2 in both engines simultaneously.

To operate the adjuster, a small flat-bladed screwdriver must be inserted which then enables it to be turned clockwise or anticlockwise.

The pilot planned to use the opportunity of good weather at his base of Newcastle Airport to perform the adjustment flight.

He and a maintenance engineer, who was to accompany him, together reviewed Section 76-10-00, 5-5 – ‘Setting N2 Speed’ and Section 05-60-00, 6-4 ‘Ground Check Run and Functional Check Flight…’ of the the Aircraft Maintenance Manual (AMM).  According to the AAIB they “did not specifically brief the possible hazards of performing” the flight.

The pilot initiated a climb in accordance with the AMM procedure and called out the heights and temperatures for the engineer to record. They determined a pitch stop torque value at 9,500 ft DA of 67%, with an associated N2 of 103.2%. This was slightly lower than the required 103.8% N2 . The pilot asked the engineer to make an adjustment on the N2 adjuster, which he did. Initially there was no increase. However, after further adjustment, the N2 slowly increased at a constant rate.

As the N2 reached 103.8% the pilot advised the engineer to stop the adjustment, and he did so. However, the N2 continued to increase through 104% and the NR began to increase at the same time. The pilot arrested the rising NR at 106% (the maximum continuous power‑on NR allowable) by raising the collective lever to full travel with a torque of 69%. At this point the NR overspeed warning light illuminated and the associated aural alert sounded. To contain the now increasing airspeed and resulting airframe vibration, the pilot adjusted the helicopter attitude and initiated a moderate climb. The pilot asked the engineer to reverse the adjustment as soon as possible, which he did, but with no effect.

The pilot began to revert to manual throttle but had difficulty lifting the associated catches until he removed one of his flying gloves.

The pilot commented that he:

…wore thick gloves because he had calculated the OAT during the flight test would drop to around -15°C. However, these impeded his ability to lift the manual throttle catches, which he reflected could have been problematic had it happened close to the ground.

Just as he lifted one of the catches, the N2 rose to 105% and eventually, with further adjustments, the engineer stabilised the N2 at 101%. No further attempts were made to adjust the N2 setting.

The pilot started a gentle descent. Aware that both engines were in an “under-trimmed” N2 state, he performed power checks and a simulated approach to the hover at 2,000 ft agl. whilst maintaining a stabilised NR of 101%. Therefore, the pilot elected to fly a normal approach to his base helicopter landing site at Newcastle, using a shallow descent profile to the hover. The pilot stated that he had been prepared to engage manual throttle on the No 1 engine and increase power, or commit the aircraft to a running landing , should the NR decay dangerously on the approach.

After confirming that the NR was sufficient, the pilot hover taxied the helicopter to the parking area and landed. As he fully lowered the collective lever, the pilot observed the NR to rapidly drop to below 96%.

The helicopter was shutdown normally.

The pilot and engineer found the occurrence disconcerting because they were faced with several emergencies in a short space of time.

In its internal report into the serious incident, the manufacturer stated that the correct procedure had been followed.  During the subsequent investigation..the adjuster was found to be faulty.

After removal of the adjuster the stop ring could not be found. 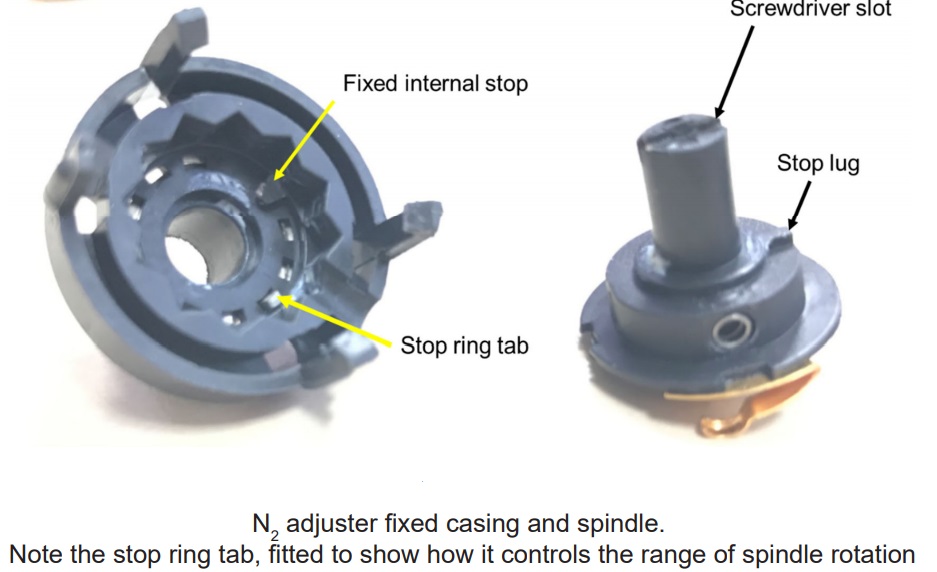 Tests carried out on the adjuster using a spare stop ring showed that the adjuster worked correctly, with the stop ring and fixed stop restricting rotation either side of its neutral position.

The adjuster spindle rotated freely through approximately 330° so was only being restricted by its fixed internal stop.

The metal stop ring tab engages in the plastic components within the switch. The helicopter manufacturer issued a Technical Information Notice in 2010 drawing attention to the delicacy of the N2 adjuster in the P2 variants of the EC135 helicopters. It also described the differences between the adjusters and how they operate to adjust the N2 .

In relation to the conduct of the flight, that we would prefer to call a maintenance check flight (see below) rather than a test flight:

The operator indicated that, at the time of the occurrence, line pilots were permitted to perform the N2 adjustment flight.

The manufacturer stated that it is for an operator to decide which of its pilots qualify for maintenance activities. However, the manufacturer indicated that this flight test [sic] should be restricted to specially trained pilots, commenting that its own pilots undertake in-house training and would not carry out this flight test until they had seen it performed by another pilot. The manufacturer highlighted the importance of briefing what might happen on such a flight test, a process known as Threat Error Management (TEM).

During the flight, the engineer was unable to control N2 and the pilot made large control inputs to control NR. High and low NR values had the potential to have a catastrophic effect on the helicopter in flight but by working together and using the effects of the helicopter dynamics, the pilot and engineer were able to stabilise the NR, albeit lower than normal, and recover the helicopter to land safely.

NR variation was consistent with N2 changes made using the faulty adjuster.

The AAIB concluded the stop ring was missing.  There is no comment on when or how that occurred.

In the absence of the stop ring there was no means to ensure correct alignment of the contact combinations within the rotary switch. This meant the switch did not have a reliable effect on N2 . The engineer making the adjustments could not determine which contacts were made and was no longer confident in the neutral position. The gradual N2 change rate also made it difficult to establish what was happening with the adjuster, which appeared to be having an unexpected effect.

The pilot had not been trained to carry out the procedure but his actions in flight prevented a more serious outcome.

After this serious incident the operator…

…categorised all flight tests [sic] according to which of its pilots should perform them. Level 1 tests may be performed by line pilots without specific training; Level 2 tests require pilots to undertake a briefing; and Level 3 tests may only be conducted by specially trained type rating instructors and examiner pilots. The N2 adjustment flight test was categorised as Level 3, and the required training was modelled on that provided by the manufacturer to its pilots.

They also intends to include this scenario in its newly established simulator training.