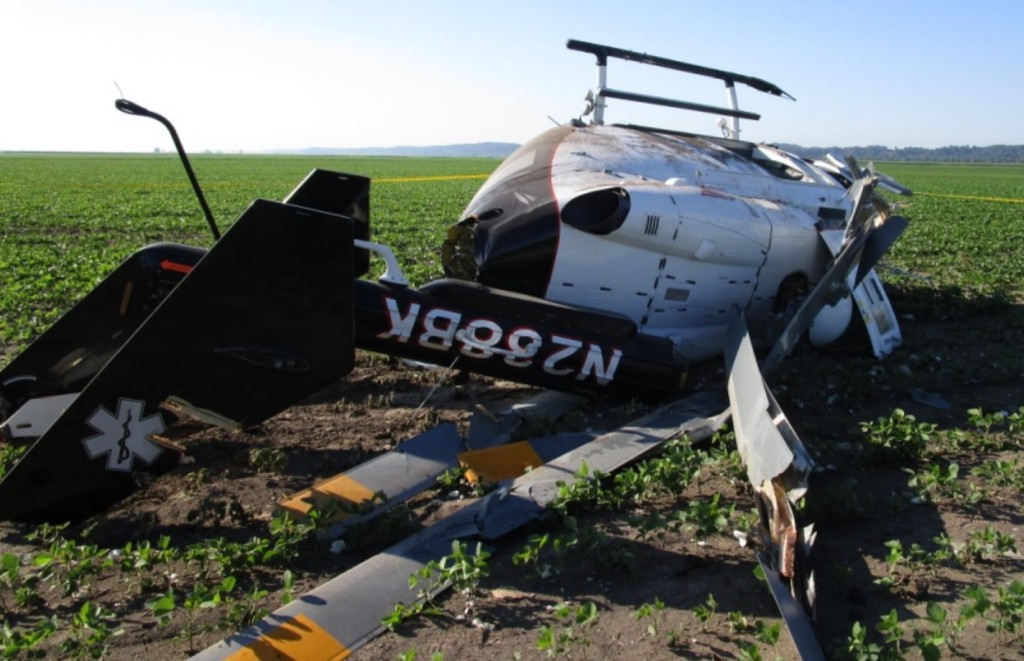 The pilot, the three medical personnel and the 5 year old patient all received minor injuries.

The aircraft was established in cruise at 120 kts and an altitude of 1600 ft AMSL (approximately 1200 ft AGL).  According to the US National Transportation Safety Board (NTSB) investigation report, the pilot stated that…

…about 17 minutes after takeoff while in cruise flight at dusk, the helicopter “experienced a sharp change in attitude yawing to the left with a hard-upward bump,” followed by a change in engine noise. He saw that the engine gas generator speed (N1) gauges for each engine were indicating below 40% and decreasing and that the No. 1 engine low warning light, the No. 1 generator light, and the battery discharge warning lights were illuminated.

…the helicopter suddenly “pitched nose up and rolled to the right” and that he then heard the rotor speed begin to deteriorate. He entered an autorotation by applying right forward cyclic and lowering the collective to full down.

During the autorotative descent, he saw power lines and a ditch, which required him to change the helicopter’s flightpath and land on the far side of the ditch. He flared the helicopter about 100 ft above ground level, and the rotor speed began to decay rapidly.  [T]he helicopter landed right skid low and then skidded for about 100 ft. The main rotor blades hit the ground as the helicopter rolled onto its right side. 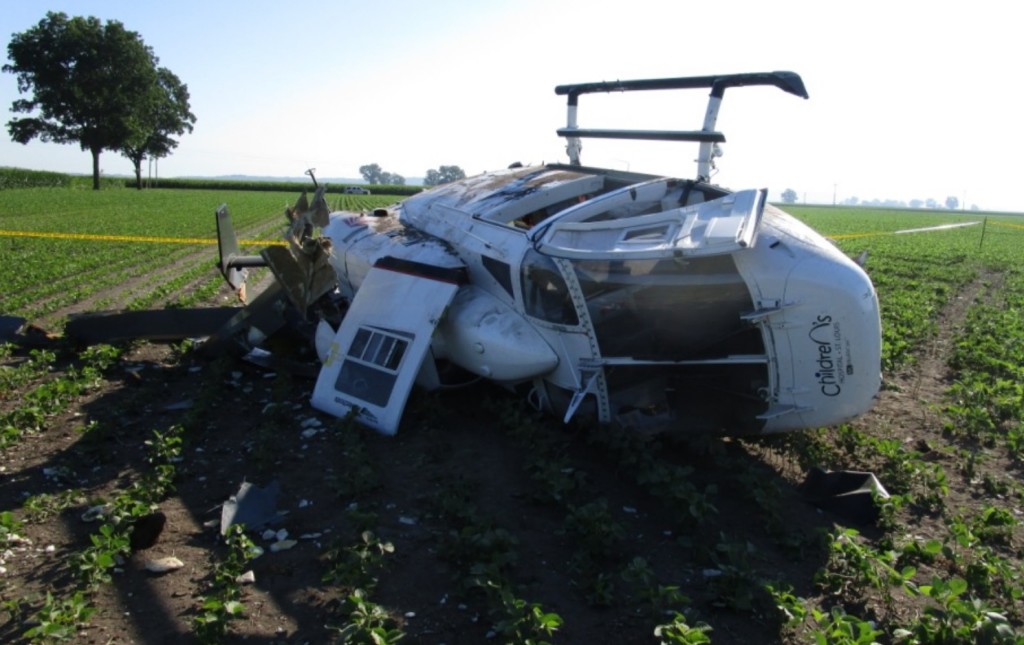 The fuel transfer system between the main tanks and the supply tanks and from the supply tanks to their respective engines and the fuel delivery system functioned normally during operational testing. No residual fuel was found within the engine fuel filter bowl, indicative of no fuel reaching the engines. Based on the pilot’s statement that he saw a steady stream of fuel leaking from a fuel vent port on the helicopter’s belly shortly after the accident, fuel was likely present within the main fuel tanks.

Therefore, based on the evidence, it is likely that the pilot did not activate the fuel transfer pumps, which resulted in no fuel transferring between the main fuel tanks and the supply tanks and led to eventual fuel starvation. Thus, when the engines consumed all available fuel from their respective supply tanks, the dual-engine loss of power occurred.

The helicopter’s warning and caution annunciator panel functioned normally during post-accident testing.  However, it was found that the dimming function was activated. 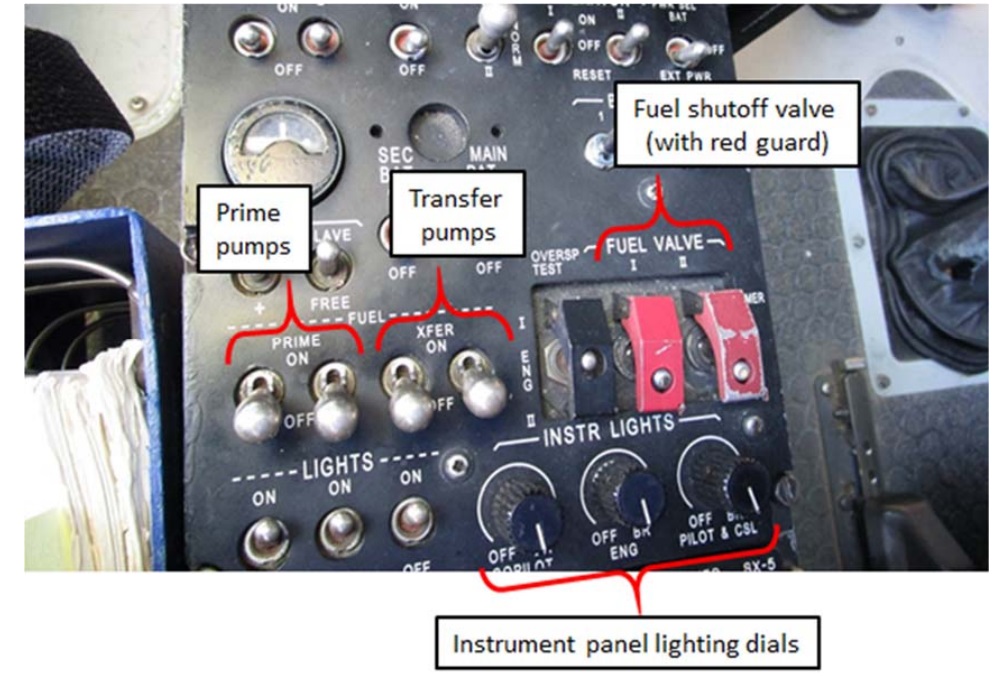 The pilot confirmed he had activated this feature before take-off.

A night vision goggle (NVG) compatible interior lighting system, manufactured by Ahlers Aerospace, Inc., was installed under FAA Supplemental Type Certificate (STC) No. SR09523RC. The night vision imaging system (NVIS) kit uses infrared filters that are installed externally to the faces of instruments and displays to reduce or eliminate infrared glare. An infrared filter is also placed over the advisory, caution, and warning annunciator panel. STC No. SR09523RC does not affect the instrument lighting controls originally installed on the helicopter. 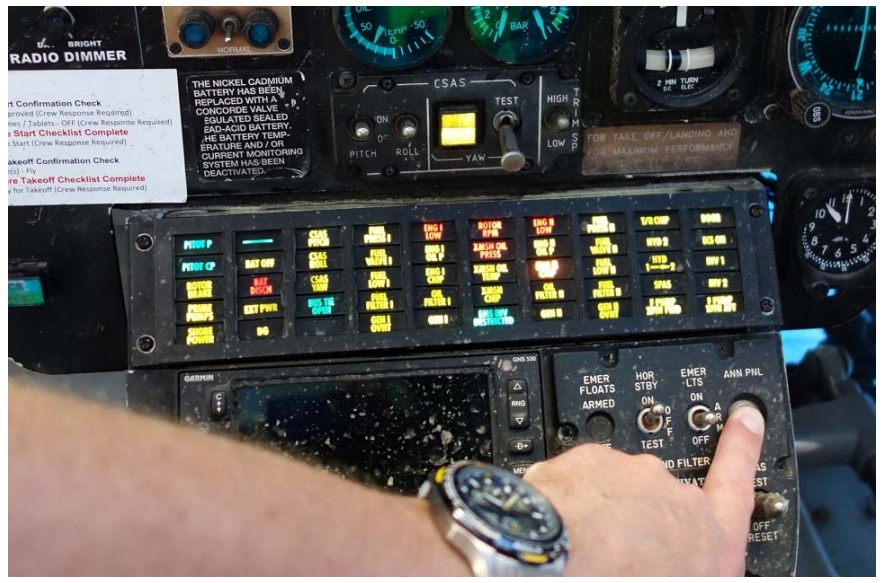 When the annunciator lights were dimmed [during post-accident tests] the following was observed: 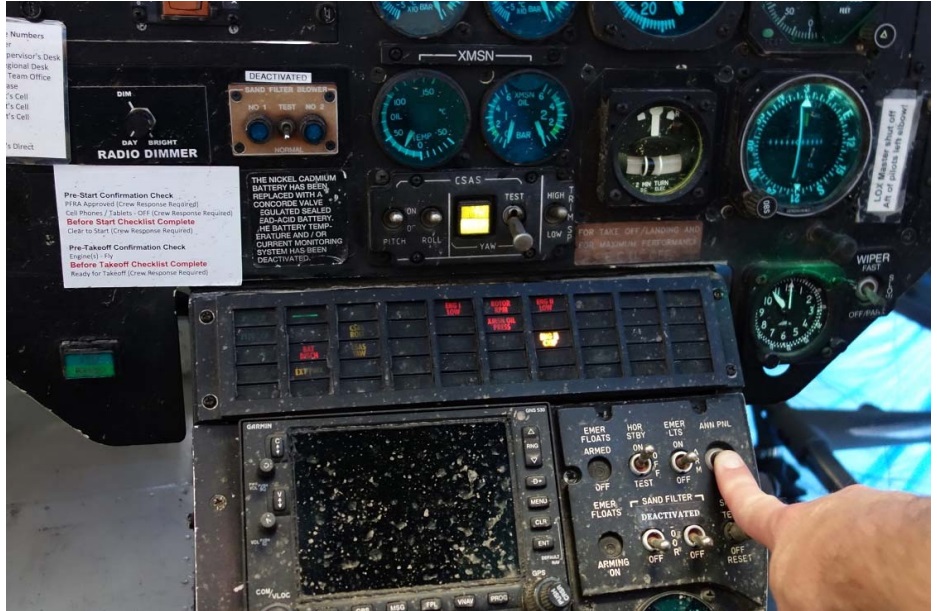 The ambient light at the time of the flight and the pilot’s activation of the dimming function in conjunction with the night vision imaging system filters likely precluded the pilot from being able to see the illuminated caution lights on the annunciator panel and an illuminated master warning light.

The dimming function is not mentioned in Air Methods recurrent training included by the NTSB in the public docket and there is no advice in relation to it when using NVGs.

Note: there is no indication in the NTSB report that NVGs were actually in use on this flight.

The NTSB make no mention of certification requirements for NVG integration or how this STC was undertaken in their final report.  There is brief mention of daylight readability testing the HF Specialists report but no mention of dimming.

The pilot, age 59,…had 6,237 hours of total flight time with 308 hours of flight time in the make and model of the accident helicopter. 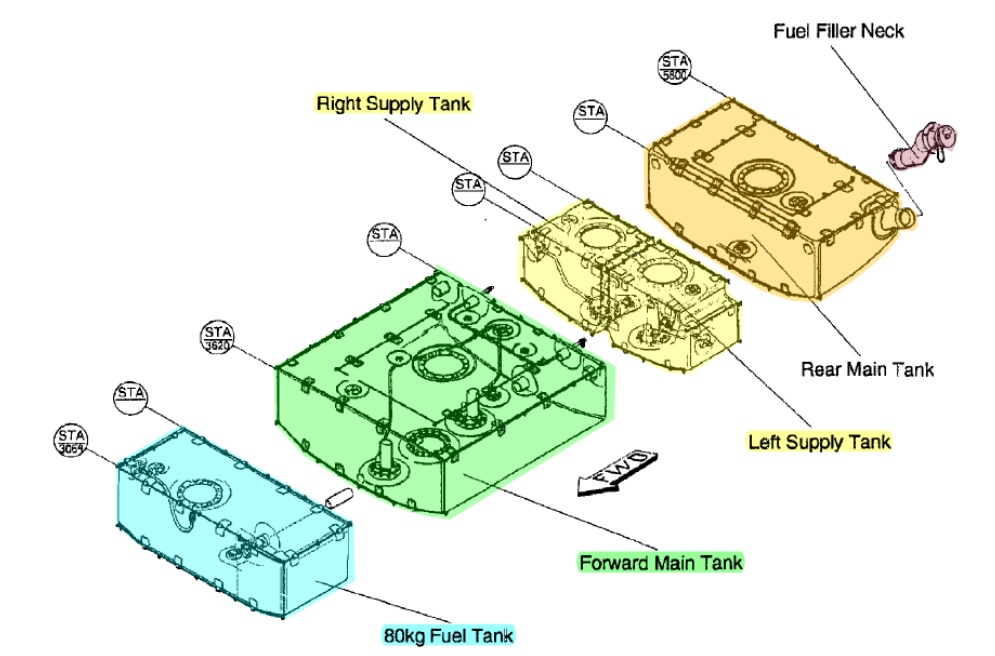 There are four fuel pumps within the helicopter fuel system: two fuel prime pumps and two fuel transfer pumps. Each supply tank contains a prime pump that delivers fuel to the engines via feed lines during engine start. Once the engines are running, the engine-driven fuel pumps draw fuel from the supply tanks and the prime pumps can be turned off.

AMC require that the transfer pumps are left on throughout the flight, as discussed in their recurrent training.

On 20 July 2001, BK117C1 N313LS, experienced a dual engine power loss in flight and autorotated into a field near Decatur, Texas. The fuel transfer pump switches had bee set to off for most of the flight.  The pilot did not see any warning lights but the dimming function of the pilot instrument and console instrument lighting was turned on.

On 5 May 2014, a BK117B2 ZK-HJC, experienced a dual engine power loss in flight and performed a successful autorotation near Springston, Canterbury, New Zealand.

We reported on that here: Dim, Negative Transfer Double Flameout on 23 April 2016 (over 14 months before the Air Methods Perryville accident).

The German accident investigation agency, the BFU, provided the NTSB with correspondence from within the FAA in 1993 and 1994 which discussed fuel starvation accidents involving the earlier MBB Bo105-series.

The correspondence, spanning from 1992 to 1994, discussed accidents in which the fuel transfer pump switches were not turned on in flight. Similar to the BK117-series helicopter, the Bo105-series helicopter contains a main fuel tank and a supply tank, the latter of which feeds the No. 1 and No. 2 engines. Pumps transfer fuel from the main fuel tank to the supply tank. A low fuel warning transmitter in the supply tank triggers a low fuel light in the cockpit annunciator panel but there is no associated aural warning.

Fuel starvation due to the pilot’s failure to turn on the fuel transfer pump switches during takeoff, which led to a total loss of engine power.

Contributing to the accident was the pilot’s improper decision to activate the annunciator panel’s dimming function during dusk, which prevented him from seeing the illuminated fuel transfer pump caution light indicating that the pumps were off and the illuminated caution lights for low fuel in the supply tanks.