The US National Transportation Safety Board (NTSB) say in their preliminary report that:

The pilot and paramedic sustained minor injuries, the flight nurse sustained serious injuries, and the patient was not injured during the accident. 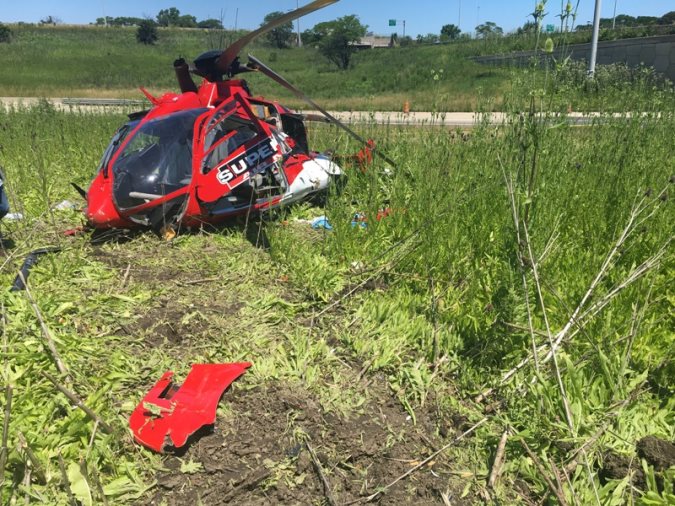 The helicopter sustained substantial damage to the fuselage, tailboom, and main rotor blades.

Examination of the Wreckage

….the initial impact was consistent with the fenestron skid cap contacting the terrain first, followed by the landing gear skids and fuselage.  The left landing gear skid was separated and came to rest near the ground scar consistent with the fuselage. The fuselage was crushed upward, and the fenestron assembly was separated at the tailboom attachment location. 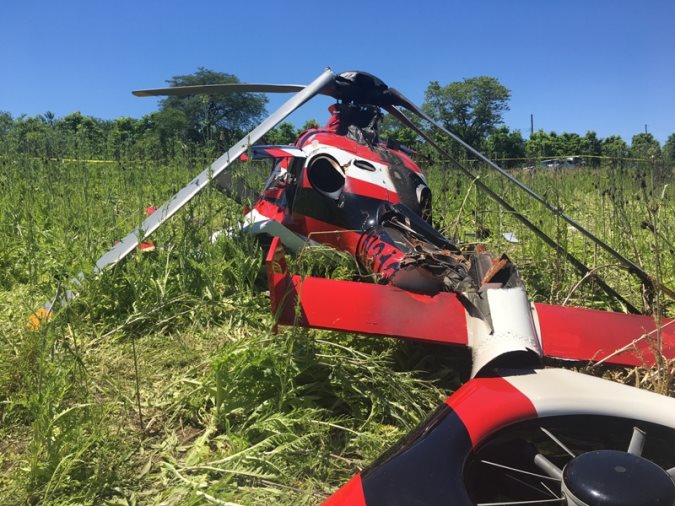 Thermal damage was noted on the right engine and main transmission cowling.

Next Steps in the Investigation

The helicopter was equipped with Outerlink IRIS.  This provides video, voice and flight data recording as well as satellite communications. The IRIS equipment was sent to the NTSB Vehicle Recorder Lab for analysis.

We will update this report as more information emerges.

Although the NTSB are yet to issue their probable cause, they have issued several revealing documents and a factual report update.

On the evening of the accident, the pilot received a flight request, checked the weather, and performed a preflight inspection for the planned 12 to 13-minute flight. 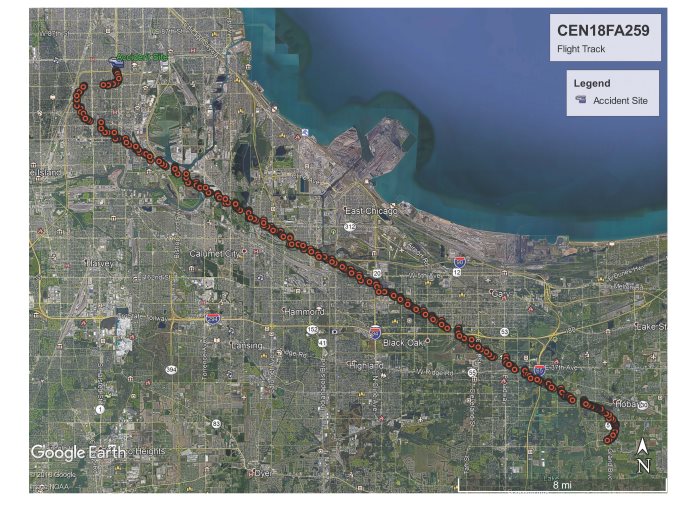 After departure, the pilot climbed to 1,700 ft mean sea level, or about 1,000 ft agl. About 5 miles west of GYY [Gary International Airport], he contacted Chicago Midway International Airport (MDW), Chicago, Illinois, requesting entry into the airspace, and noticed a “Twist Grip” warning on the left engine 1 side warning panel. The pilot noticed a second indication but could not recall the specific warning. He grabbed each engine throttle twist grip individually to gently verify if he could feel they were in or out of position, and he did not notice any significant changes to the throttle position.

As the pilot executed the turn to GYY, he noticed the No. 2 engine indication (N1 gas producer) no longer matched with the No. 1 engine; “it was lower and oscillating.”

Within about 1 minute of the turn toward GYY, the pilot “heard the low rotor RPM horn”, and he lowered the collective to maintain rotor speed. The pilot located a “dark spot” which would give him the best opportunity to complete a full autorotation with a flare to cushion the landing. The pilot determined he no longer could troubleshoot the problem and was doing his best to fly the helicopter. As he started a turn toward his intended landing location, he felt the tail oscillate to the right and back and heard increase and decrease in engine speed. About 200 ft agl, he thought he may land short of the intended location, and he made adjustments to the collective and cyclic to maintain rotor RPM and airspeed. The pilot then initiated a flare and landing. After the helicopter came to rest, the flight paramedic mentioned the helicopter was on fire, and the pilot noticed a fire near the No. 2 engine.

An NTSB CVR transcript summary is as follows:

2122:03.2 Pilot: We gotta re-return to uh Gary you guys are gunna have to go by ground I got a manual twist grip here.

The pilot had never flown an EC135P1 simulator for the simple reason there were none worldwide.  The NTSB note:

The pilot completed the Pentastar “RW EC-135P1 Differences Training”, which was an online self-study course, on February 18, 2018. The online course included, but was not limited to, the following differences: [Cockpit Display: CDS vs CPDS], analogue versus first limit indicator (FLI) all engines operative and one engine inoperative limits, and twist grip controls. 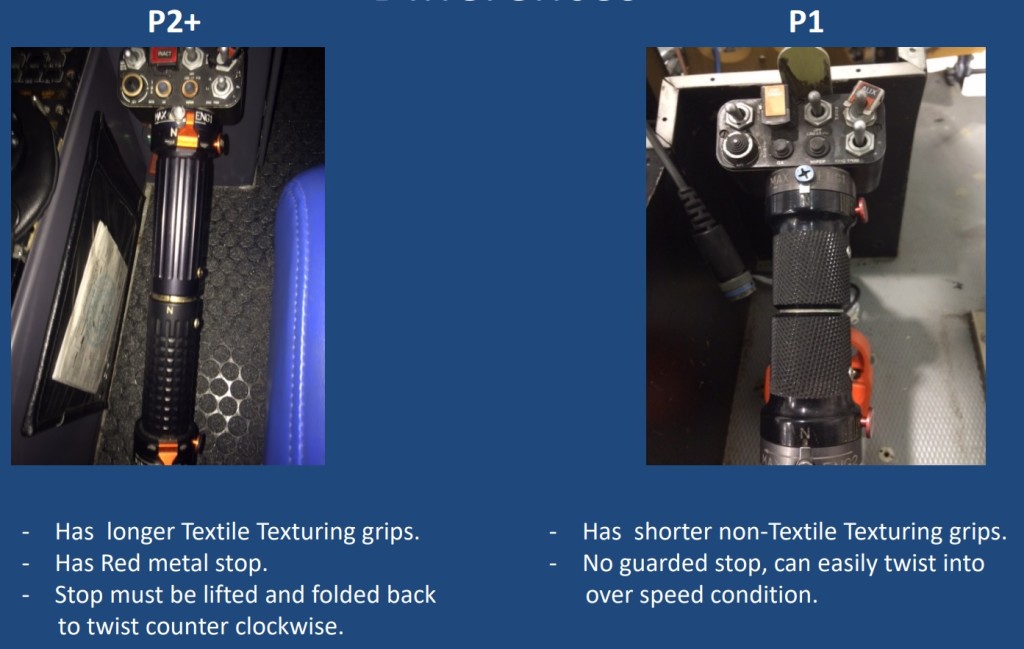 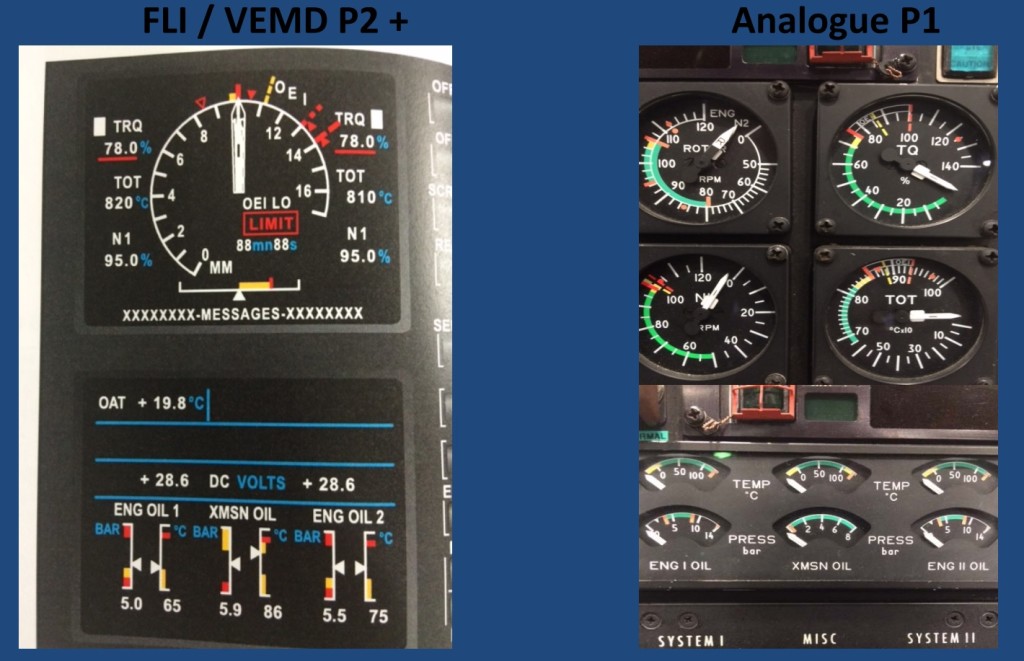 In addition, the pilot stated he completed some “hands-on” EC135P1 training with other company pilots, and familiarization flights.

The EC135P1’s engines were equipped with Electronic Engine Controls (EECs). The engine throttles or ‘twist grips’ are mounted on the collective. Normally the throttles are set in the neutral position, allowing the EECs to control the engines.

Examination of the engines revealed that:

The damages [sic] observed on both engines are characteristics of blade release due to a power turbine rotor overspeed condition. The physical evidence of the overspeed is consistent with what was found from the flight data, which showed that prior to impact the engines were in manual mode and the torque was increased using the twist grip, with the collective decreasing. The high rotor alarms at 106% and 112% NR were activated, after which the engine torque was further increased until the NPT signal went above 127% at which point the data held the last good value until the speed came back below 127% NPT. The faults recovered in the EEC show that both Q and NPT sensors recorded the NPT exceeding 127%.

Flight conditions prevailing at the time of the accident flight were such that the main rotor speed (NR) and power turbine speeds should have been governing at 100% during the entire flight. At 2114:29.5, the No. 1 engine entered manual mode following a collective (CLP) input, and the engine remained in manual mode for the remainder of the flight. The No. 1 engine no longer responded to CLP inputs and appeared to increase in torque while the CLP was being lowered which can be explained by a rotation of the twist grip.

As the torque was increased with the CLP decreasing, the engines’ NPT speeds and main rotor speeds increased.

In other words, it appears that flight crew action resulted in overspeeding both engines while inadvertently in manual mode and the resulting power turbine blade shedding.

A similar, albeit fatal, accident occurred to EC135P1 N601FH on 30 June 2006.  Again this was the only CDS equipped EC135P1 in that operator’s fleet and again the differences training was trivial (1 hour).  In that case the NTSB Probable Cause was:

The operator’s inadequate training program and the pilot’s failure to maintain control of the helicopter following his inadvertent disabling of the No. 1 and then the No. 2 engine full authority digital engine control system.

A modification was available that would have helped mitigate the risk:

According to Eurocopter Service Bulletin EC135-67-013 – Rotor Flight Control – Collective Control – Replacement of collective levers and introduction of a weight compensation, dated July 28, 2008, Eurocopter (Airbus) offers collective levers with grips ENG 1/ENG 2 that offer an increased mechanical protection against unintentional adjustment. In addition, the surface structure of the grips ENG 1/ENG 2 differs decisively so that they can be distinguished by tactual sensation.

The pilot’s inadvertent disabling of the No. 1 and No. 2 engines’ electronic engine control systems, which resulted in engine and rotor overspeed conditions, a subsequent autorotation, and a hard landing.

Contributing to the accident were the pilot’s inexperience with the helicopter variant and the operator’s lack of a more robust helicopter differences training program.