The Transportation Safety Board of Canada (TSB) has released their investigation report into a fatal power loss while hovering alongside a power line near Paynton, Saskatchewan on 22 October 2015. 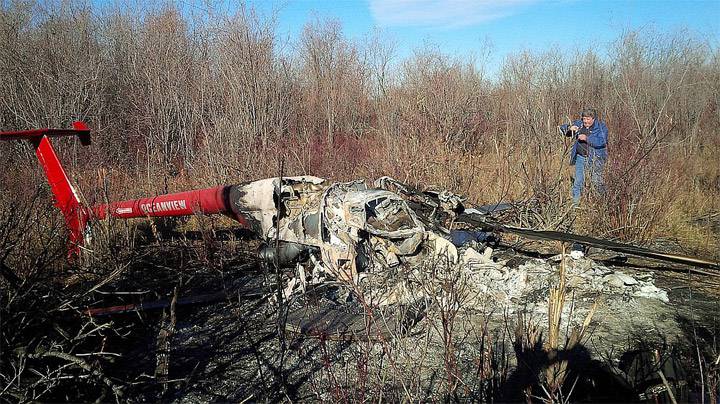 SaskPower had contracted Forbes Bros…to construct and erect hydro towers and to string power lines. Oceanview Helicopters was contracted by Forbes Bros to carry out aerial work and install marker balls on power lines strung over the North Saskatchewan River.

Because SaskPower had no control over the aerial work being conducted, Forbes Bros. Ltd. and Oceanview were expected to provide the necessary oversight.

…conducting aerial work installing marker balls…with a pilot and an external platform worker [from Forbes Bros] on board. 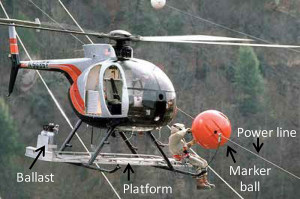 During the marker ball installation, the single-engine helicopter was hovering at 325 feet above ground level when it experienced an engine failure. 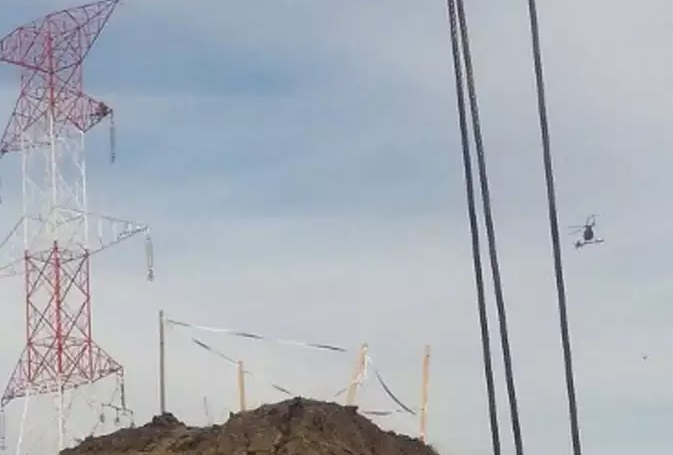 The helicopter began to descend and collided with terrain.

The rate of descent, calculated by analysis of the video, would have resulted in a g force of 139 to 208 on impact.

Possible attempts by the pilot to arrest the rate of descent before impact may have reduced impact forces; however, they remained above the threshold for survivability. The g forces sustained on impact were also well outside the structural limitations of the helicopter and resulted in the rupture of the fuel cell and a post-impact fire. It was determined that the accident was not survivable.

Both the pilot and the platform worker sustained fatal injuries, and the helicopter was destroyed…

The engine was badly damaged in the post-crash fire. 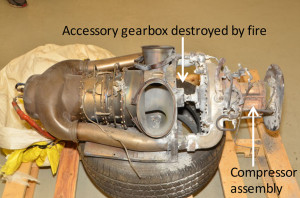 The investigation however was able to determine that an engine compressor failure resulted in the loss of power.

It was determined that the lead event was likely the failure of a stage 2 compressor blade; therefore, it is likely that the failed compressor blade was subject to fatigue and eventual overload failure before the prescribed overhaul period had elapsed; research suggests that this sort of failure is rare.

The TSB were not able to pinpoint a specific cause of the blade failure.

The investigation also concluded that, while not contributory in this occurrence, the reduced-interval erosion/corrosion inspection and daily fresh-water rinses of the compressor were not completed as recommended by the engine manufacturer. If operators do not follow manufacturer-recommended procedures when operating in an erosive/corrosive environment, there is an increased risk of an undetected and premature failure of the compressor.

We have previously discussed failures to follow these recommendations: Ignoring Corrosive Environment Brings Down Helicopter involving a power line washing operation in Taiwan.

As the loss of power:

…occurred while the helicopter was in a hover, and there was insufficient altitude to conduct an autorotation landing (a manoeuvre to land without engine power), which led to the helicopter impacting the terrain.

The TSB observed that:

…the helicopter was hovering at an approximate altitude of 325 feet with very little wind. In this occurrence, the pilot had to avoid power lines and could not immediately transition into forward flight. A significant amount of rotor energy was expended while pulling back…

For the Hughes 369D helicopter to achieve a successful autorotation from a state of hover with no airspeed, required conditions include having a minimum altitude of 500 feet above ground level and then immediately transitioning into forward flight to maintain the rotor energy required to slow down the helicopter’s rate of descent. 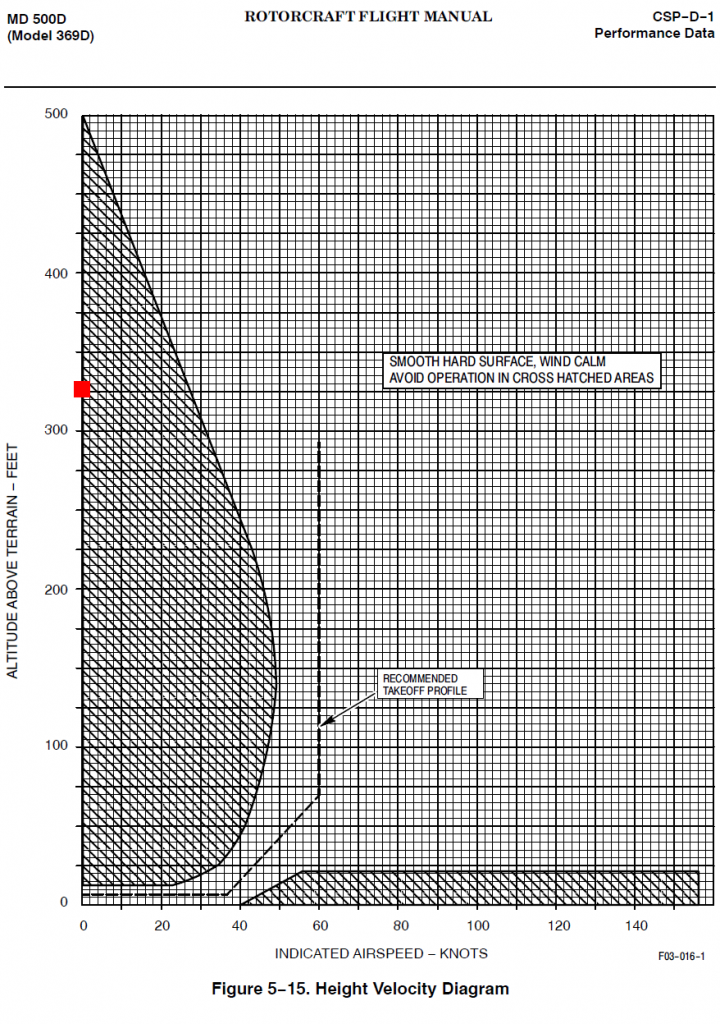 Height velocity diagram, showing altitude and airspeed at the time of the engine failure (red square) (Credit: RFM for the Hughes 369D, with TSB annotations)

In this accident, the engine failure occurred when the helicopter was operating in this area of flight profile.

The TSB say that:

The use of single engined aircraft for this role is not discussed.  Southern California Edison (SCE), a subsidiary of Edison International, in California, use a twin engine Airbus Helicopters EC135 (H135) to transfer power transmission linesman to pylons in remote locations, as discussed in our article: What the HEC?! – Human External Cargo

Video from another H500 operation:

We recently discussed another power line construction helicopter accident, whose report was issued on the same day by the Accident Investigation Board Norway (AIBN):  Unexpected Load: AS350B3 USL / External Cargo Accident in Norway

See our article The Tender Trap on procuring aviation services.