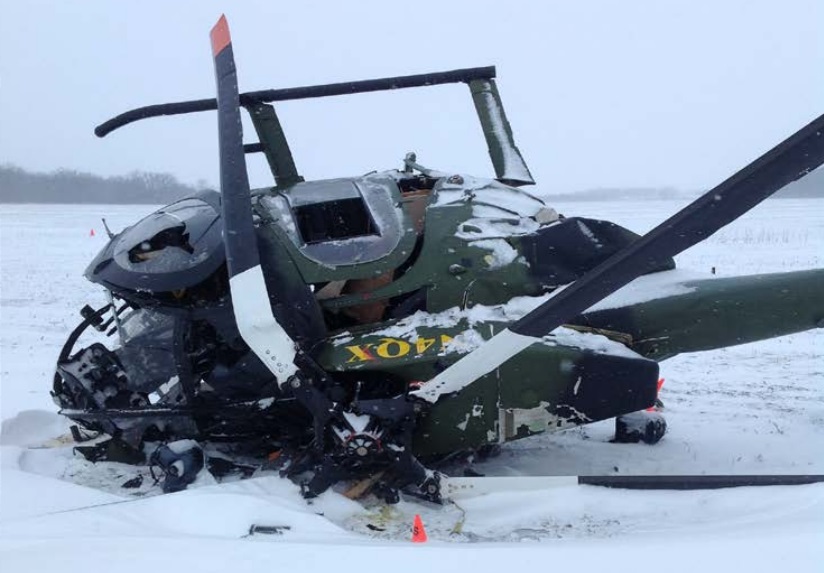 US National Transportation Safety Board (NTSB) say in their safety investigation report that Vista One holds a Part 133 Rotorcraft External Load certificate and conducts power line inspections under Part 91.  The accident flight was the first leg of inspections of the Toledo Edison power grid from Bowling Green, Ohio to the Indiana/Ohio border over the following 4 weeks. Vista One’s power line inspection flights involved the helicopter flying along the line, circling each tower then continuing along the line. Vista One’s owner explained that:

It was the responsibility of the crew member [the inspector sat in the rear on the right hand side], using binoculars and a camera, to inspect the towers and lines for the security of cotter keys, nuts, bolts, and so on.

The pilot would position the helicopter skids above the static line, about 20 ft, during these flights. …it was typical for the helicopter to cover between 2 and 3 miles in an hour. In the accident report form, the owner stated that it was not normal to inspect the lines in snow and blowing snow due to the poor visibility and wind gusts.

Toledo Edison is part of FirstEnergy, a company with a c$25 billion market capitalisation and annual revenues of c$11 billion.

Vista One told the NTSB that the pilot had departed from the company base at the Wayne County Airport, Wooster, Ohio, earlier that morning to pick up a power line inspector at Wood County Airport, Bowling Green, Ohio.  The inspector had driven from his home in West Virginia. The pilot refuelled the helicopter during their 63 minute stop there.  Security video showed the helicopter on the ramp in falling snow throughout this period. 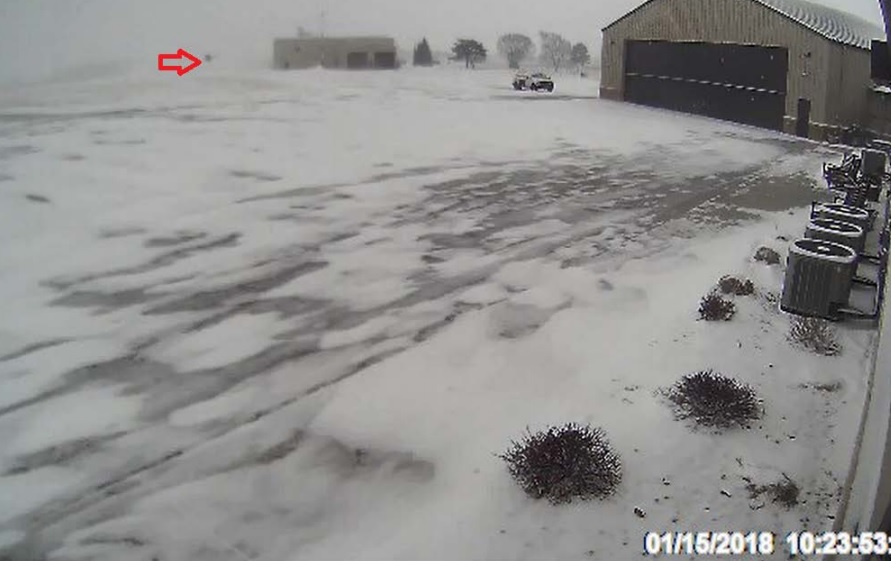 Vista One MD369 N4QX Refuelling Before Departing on a Power Line Inspection Flights (Credit: via NTSB)

Witnesses described the snowfall as “moderate” at the time of departure.  No explanation of why the flight was conducted in such conditions was forthcoming from Vista One or discussion by the NTSB of their operational control or flight following.  The National Weather Service (NWS) forecast sub-zero air temperatures, east-southeast wind of 5 to 10 knots, overcast sky cover and light snow.

In their safety investigation report the NTSB report the low-time pilot had logged just over 1,200 hours in helicopters, around 200 hours in the MD369. The pilot had logged less than 100 hours of simulated instrument flight time and no flight time in actual instrument conditions. The last simulated instrument flight (0.4 hours dual received) was conducted in September 2015 in a Robinson R44.  The pilot had started work for Vista One in September 2017, so significantly this was his first winter with them, and had flown just over 300 hours for the company.  Of note is that…

Data recovered from a handheld global positioning system unit (GPS) (a Garmin GPSMAP 496], located in the wreckage…illustrated the helicopter in multiple right turns consistent with line inspection operations. The last few minutes of the track data showed the helicopter at an altitude between 800 ft and 840 ft mean sea level (msl) or between 180 ft and 220 ft above ground level (agl) and at an airspeed of less than 10 knots. 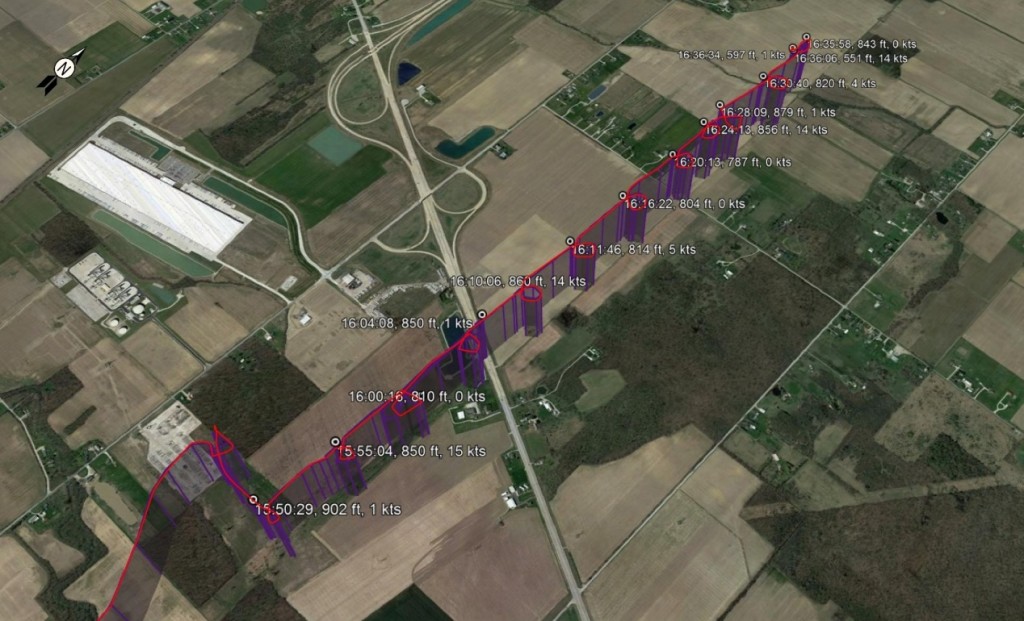 NTSB Plot of GPS Data (inc groundspeed and height above sea level) for Vista One MD369 N4QX Just Prior to the Accident (Credit: via NTSB)

This operational profile meant the helicopter was circling the towers while in the avoid area of the height velocity curve. 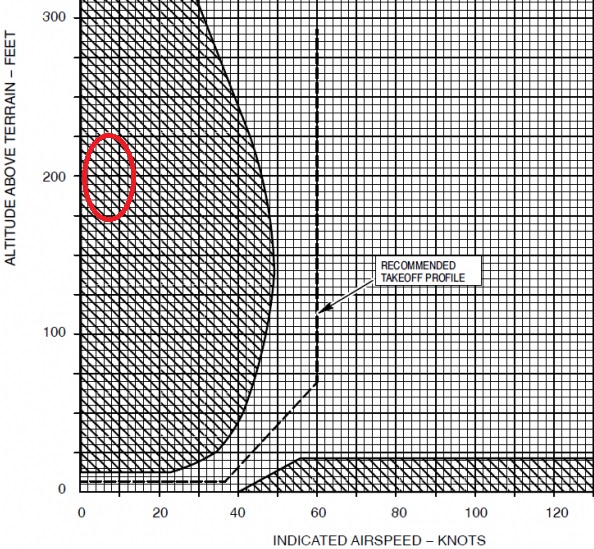 The helicopter was not equipped, nor was it required [by regulation] to be equipped, with either a radar altimeter or emergency locator transmitter.

Ground scars and damage…were consistent with the helicopter impacting the ground in a vertical and level pitch attitude. The ground was frozen, and it had snowed before, during, and after the accident. Photographs provided by first responders illustrated extensive debris and disturbed ground immediately adjacent to the belly of the helicopter. The helicopter came to rest on its left side with the nose oriented on a heading of 256°. 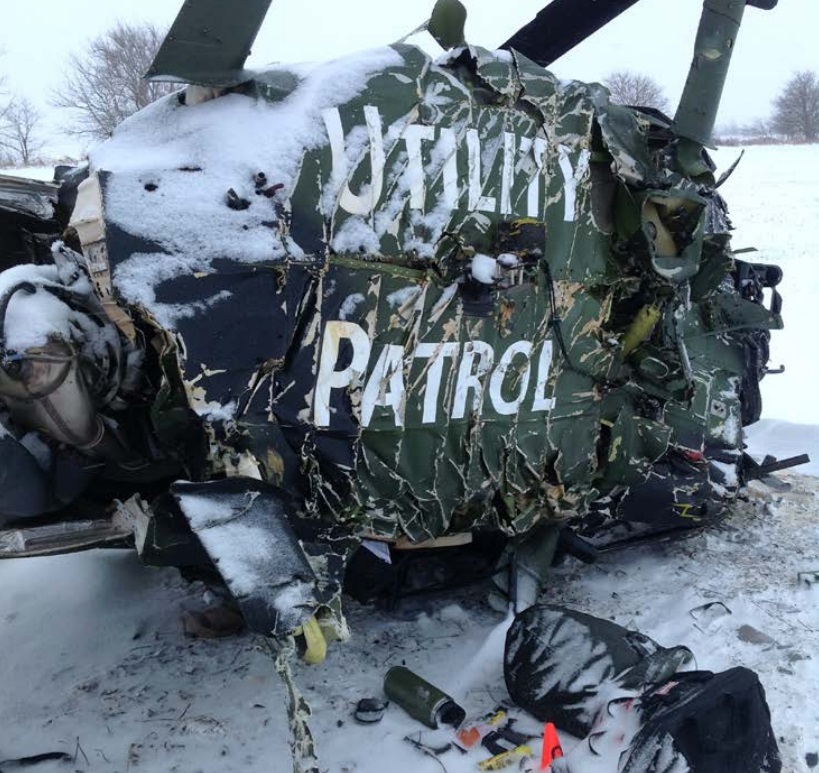 The lower fuselage exhibited extensive upward crushing along the entire span of the fuselage. The cabin of the fuselage was crushed up from the floor/belly of the helicopter. The left side of the helicopter exhibited more upward and sideways crush as compared to the right side. The upper and lower windscreens on the left and right side were impact damaged and fragmented. 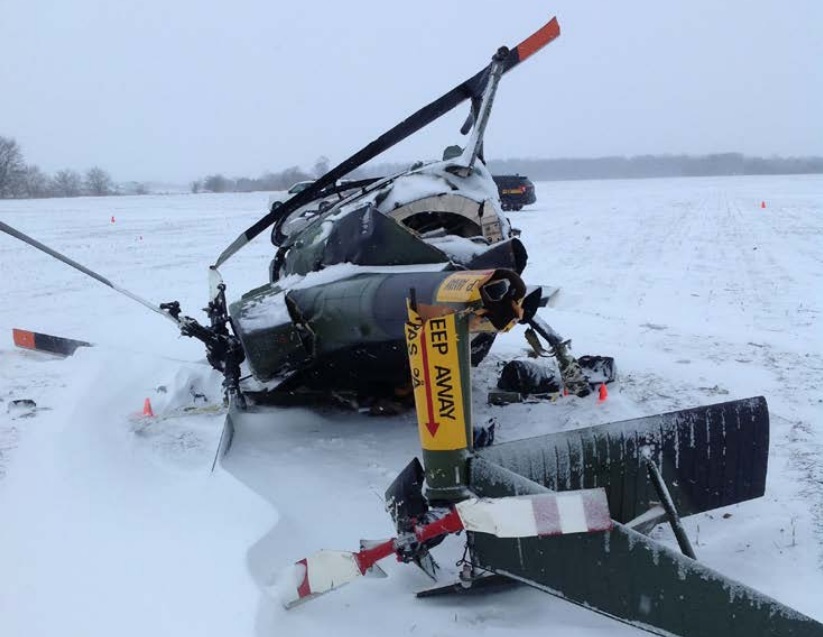 The RE-IGN bulb stretch signatures are consistent with activation of the engine ignition system, indicating that power turbine speed was low. The lack of stretch signatures on the flashing engine out caution panel light is likely due to the light’s cycle stage at the time of the impact. There were no mechanical anomalies with the helicopter, engine, or fuel system that would have precluded normal operations. There was no damage to the compressor, compressor front support vanes, or first-stages rotor blades that was consistent with hard body ingestion.

According to Rolls-Royce, a 1968 study showed that as little as 30 grams of snow/slush ingested in the engine inlet can induce a flameout in the Allison 250-series engines.

The NTSB investigators say they were…

…not able to determine how much snow or ice accumulated on the helicopter while it sat on the ramp or how much snow or ice was removed before the helicopter departed. The helicopter was operating at a slow forward airspeed and in hover for most of the flight increasing the likelihood of snow and or ice accumulation in the engine inlet area during the hover inspection operations. According to the engine manufacturer, snow ingestion cannot be ruled out as it does not always produce visible damage to the compressor. The helicopter was not equipped to prevent or mitigate the accumulation of snow in the inlet; only to prevent snow and ice from entering the engine through the fuel system. The manufacturer required the installation of the auto-reignition system in order to operate in snow and ice; however, the low altitude where the loss of engine power occurred was likely insufficient for a successful auto-relight and recovery of engine power. Performance charts indicate the helicopter was operating within an airspeed and altitude combination which would make a successful autorotation difficult to perform. The flat light and/or white out conditions would increase the difficulty of judging altitude, depth, and distance during an autorotation.

Two family members of the pilot alleged that the operator pressurised its pilots and that two had recently left the company due to disagreements with the owner.  The NTSB however do not appear to have interviewed any employees to confirm or deny those second hand allegations. There is no mention if the operator had a Safety Management System (SMS), though one would not be required in the US for such operations.

A loss of engine power due to snow or ice ingestion at an altitude that was insufficient to allow for engine re-ignition. Contributing to the accident were conditions, including altitude and flat light conditions, that precluded a successful autorotation to the field.

In November 2013, the FAA issued Special Airworthiness Information Bulletin (SAIB SW-08-03R4) – Recommendations for Rotorcraft During Icing/Snowy Conditions. The SAIB describes the “procedures to reduce the probability of an engine in-flight shutdown due to ice and/or snow ingestion. MOST helicopters are not approved or equipped for flight into icing conditions.” “Snow and ice can build up in the engine intakes and plenums when the rotorcraft is on the ground with the engine(s) not operating or are operating at a low power settings for extended periods.” The SAIB went on to state that “Snow may accumulate on or in the engine inlet area during hover…”

In addition, the FAA safety pamphlet “Flying in Flat Flight and White Out Conditions” addressed the dangers associated with these weather conditions. These dangers include the lack of reference points to be used in determined depth perception while landing.