The Australian Transport Safety Bureau (ATSB) report that on 20 June 2021, an Airbus Helicopters AS350B3 was damaged and a ground crewmember injured at the end of Helicopter External Sling Load Operations (HESLO) on Mount Difficult, near Horsham, Victoria.  ATSB identify neither the registration nor the operator.

The helicopter was being operated single pilot with a 100 ft long line, supported by a second pilot acting as ground crew. The two pilots had worked extensively together, swapping roles, during the unspecified project.  We note that a 20 year A$33.2 million project to create a 160 km trail along the spine of Victoria’s Grampian range, past Mount Difficult, was opened in November 2021.

The helicopter had completed the 8 lifts required that day and at 1350 Local Time returned to the Helicopter Landing Site (HLS) near the worksite.  The ATSB explain that the HLS was…

…was a confined area on the edge of a rock ledge with trees and shrubs nearby.  The established procedure was to lower the remote hook and line to the ground before releasing the line from the belly of the aircraft at the lowest safe height. The helicopter would then reposition for an approach. This allowed the helicopter to approach the HLS without the 100 ft line attached.

The pilot placed the line to the south of the HLS and re-positioned to land. Most of the line was lying on the ground, but a small section of the line was suspended in a sapling 10­­­­­–12 ft right front of the aircraft nose.  The aircraft landed clear of the line, and after receiving confirmation from the ground crew member that the landing position looked safe, the helicopter was shut down. 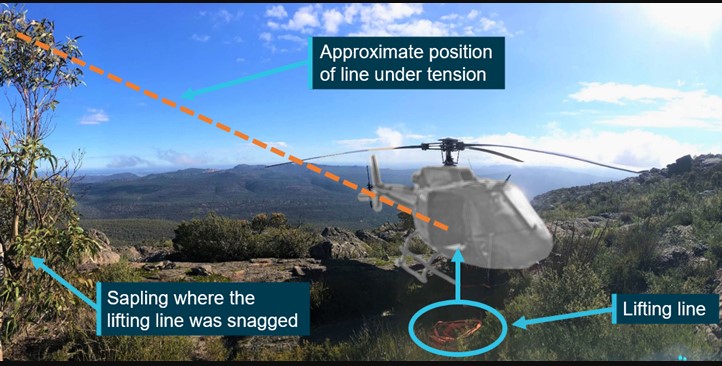 As the engine spooled down the ground crew member commenced sorting and coiling the line into the back of the aircraft. This placed tension on the line between the coiled section in the helicopter and the looped section in the tree, thereby bringing the line into the path of the rotor disc. This was caught by a blade and subsequently entangled the rotor head. The line pulled the ground crew member’s arm upwards, snared their lower leg and body, before pulling them sideways along the ground.

The crew member sustained minor bruising to their face, right elbow, left leg and foot and was later cleared of concussion or serious injury. The line was later found to have wrapped around the mast, resulting in minor damage to the swashplate, mast, rotor head and main rotor blades.

After the incident a safety briefing was conducted with all the operators pilots “which included an incident analysis, review of procedures and safety measures”. The ATSB report that “a new requirement was introduced that now states that objects should not be raised above shoulder height while under the rotor disc”. While that seems of low connection to the incident, as reported by ATSB the operator also updated their Operations Manual, Daily Safety Briefing and Emergency Plan) to clarify that:

This is a good example of never letting your guard down after higher risk activities have ended and treating even small unexpected events, like the line snagging on the sapling, as a threat.

TRANSLATE with x
English
TRANSLATE with
COPY THE URL BELOW
Back
EMBED THE SNIPPET BELOW IN YOUR SITE
Enable collaborative features and customize widget: Bing Webmaster Portal
Back
tt
Detected language : English