On 25 April 2020 Hughes 369D (aka 500D) N9159F of Haverfield Aviation, was substantially damaged in an accident near Pylesville, Maryland.  This occurred while conducting a Part 133 helicopter external sling load operation (HESLO) at a power line work site. The pilot was uninjured. 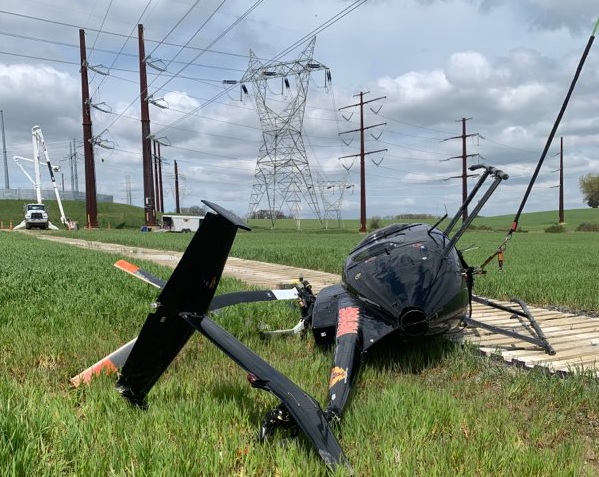 The US National Transportation Safety Board (NTSB) safety investigation report, published on 15 July 2021, explains that the 34-year-old pilot had 12549 hours total flight time, 8736 on type.  While…

…he was performing human external cargo (HEC) long line operations, he heard on the radio that ground personnel were having difficulty moving a conductor power linenearby. He proceeded to the landing zone, which was about 300 to 400 ft from the area requiring assistance, and dropped off the HEC. Then, while hovering, he picked up a conductor hook via the long line (with assistance from ground personnel) and continued to the area that needed support.

This was a change in category of load, to what the FAA defined as a Class C operations (“a jettisonable external load where a portion of the load remains in contact with land or water”). 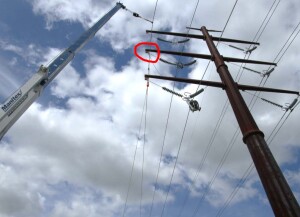 [A]fter the hook was attached to the conductor wire, he began maneuvering for about 10 to 15 seconds to move the wire a short distance laterally, as a crane was supporting the weight of the wire. [W]hile maneuvering, he applied “slight aft and up pressure” to move the conductor wire and there was no lateral banking. He believed the pitch attitude during the maneuvering was about 5° to 10° nose up. After the conductor wire was moved to the desired area, the pilot maneuvered to remove the hook from the wire, but before the hook was free, the helicopter entered a left yaw and the engine began “spooling down.”

The pilot…subsequently heard the “engine out alarm” and entered an autorotation by “slamming the collective down.”

The…loss of engine power occurred about 150 ft above ground level (agl) and [the pilot] immediately pulled the ‘belly band’ release lever—one of two levers needed to release the long line.

A belly band is secondary retention method used by the operator for HEC operations to provide redundancy in the event of an inadvertent release of the cargo hook while carrying a human load.  The pilot explained that “removing the belly band constantly throughout the day for human vs non-human line operations could lead to an installation error” and so it “normally remains installed throughout a day’s work, regardless of whether a person is on [the] line”. 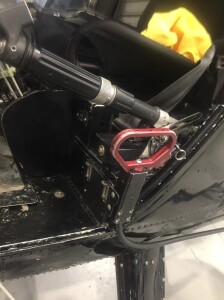 The pilot stated that he did not have sufficient time to pull the second (mechanical release) lever on the cyclic control to release the long line. 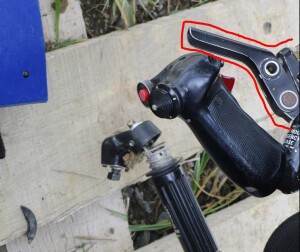 He reported that as part of his recurrent training, he routinely practiced autorotation’s, but had never practiced an autorotation while also having to pull the belly band handle and the main cable emergency release.

As the helicopter entered the flare, the pilot pulled the collective up to complete the autorotative landing, but the long line, which remained attached to the helicopter and conductor wire, became taut and caused the helicopter to roll onto its left side. The main rotor blades impacted the ground. 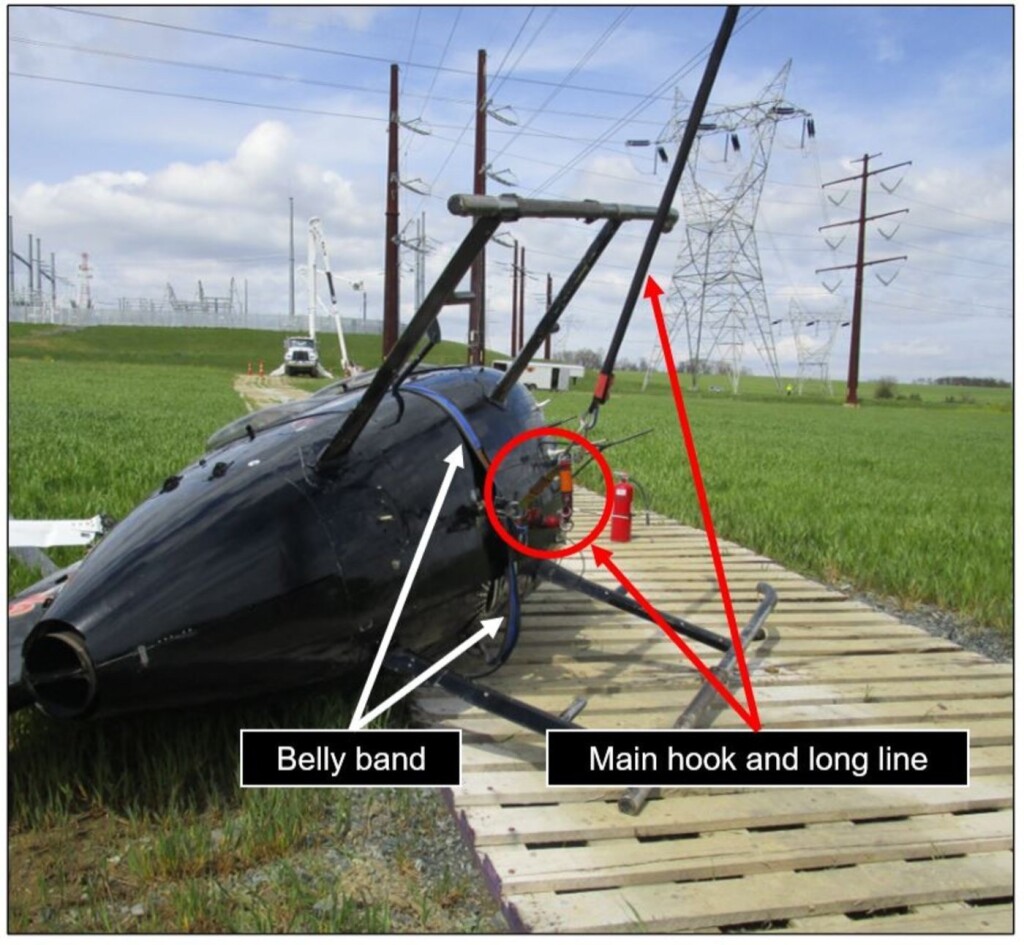 Investigators found no evidence of defects that would have precluded normal operation of the engine.

Postaccident examination of the helicopter found 146 lbs of fuel onboard. The pilot later reported that the helicopter had about 200 lbs of fuel (slightly less than half of a full load) when he began the flight about 1.5 hours before the accident.

The operator’s FAA-approved Rotorcraft-Load Combination Flight Manual (RLCFM) and corporate policy manual specified that 369D/500Ds land with no less than 100 lbs of fuel. For Class C operations, the RLCFM stated:

The operator required that its Job Hazard Analysis form be completed before each flight.

The “Fuel Check Off and Limitations” section of the form contained two options for the MD500: “100 lbs Landing Minimum” and “Wire/ Rope Pull and Wreck Out Operations: Maximum 1 hr flight time with max fuel load”.  The form contained no references to RLC classes.  The form completed before the accident flight indicated that the option for 100 lbs landing fuel minimum had been selected.

The accident pilot believed that, similar to the operation he had completed earlier in the flight, moving the conductor wire was a Class B operation because it would not require any lateral banking of the helicopter. Because the pilot misconstrued the RLC class of operation he was performing, he erroneously believed that he only needed a minimum of 100 lbs of fuel at landing.

The operator’s Director of Safety elaborated further that:

The pilot considered the task to be Class B since he was using an open clip versus a closed hook/clasp.

To his credit of the operator’s Director of Safety also proactively interviewed “numerous pilots across the industry” on this issue. “Many pilots considered the assigned task to be Class B…”

The engine fuel pick-up point is located within the left of two fuel cells, slightly above the tank floor. 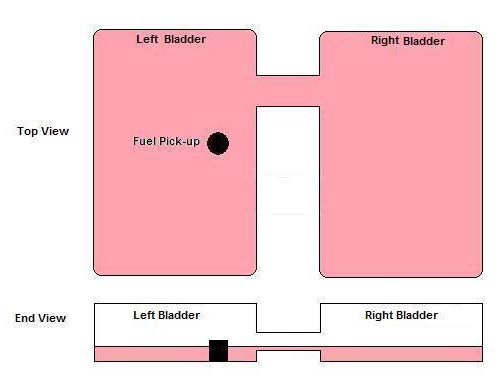 Based on information provided by the helicopter manufacturer, with 146 lbs of fuel onboard, a 28.5° positive pitch attitude, with no lateral banking, could unport the fuel supply to the engine in static conditions. Therefore, in dynamic conditions, such as maneuvering, unporting could occur at lower pitch attitudes.

The NTSB also highlight that:

The investigation report also identifies four previous investigations (three in the US and one in Australia) where fuel starvation had occurred on the same aircraft type during Class C type operations.  This included a 2017 event with the same operator which we have previously examined.

In these past accidents, the remaining fuel on board ranged between 93 to 151 lbs. The investigations…found varying levels of pitch up and/or lateral banking (common maneuvers during Class C RLC operations) could interrupt normal fuel flow to the engine (that is, unport) at fuel levels well above the standard fuel minimums required for visual flight rules operation.

The investigators concluded that…

…it is likely that the accident helicopter’s maneuvering and nose-up attitude during the pilot’s attempt to move the conductor wire led to unporting of the remaining fuel, which resulted in fuel starvation and the loss of engine power.

….it is possible that the pilot could have successfully landed the helicopter following the loss of engine power had the long line been released. The pilot had to pull two separate release mechanisms to detach the long line because the helicopter was previously configured for HEC long line operations, although the specific operation being performed when the accident occurred did not involve HEC and redundancy to secure the long line was not needed. As a result, the pilot did not have sufficient time to activate both release mechanisms…

The loss of engine power due to fuel starvation as a result of unporting of the fuel tank supply pickup while the helicopter was maneuvered to move a conductor wire.

Contributing to the accident was the helicopter’s inappropriate configuration for the type of operation being conducted, which impeded the pilot’s ability to release the long line and perform a successful emergency landing.

As a result of the accident, the operator updated its minimum fuel policies on its job hazard analysis form and in its RLC flight manual. The policies now provide specific references to Class B and C long line operations and detailed examples to help pilots’ understanding of which fuel minimums apply for specific operations.

[s]afety briefings were held with relevant operational staff to ensure their understanding with the revised fuel minimum policies.

The operator also restricted belly-band use to HEC loads only.