On 23 September 2017 an Airbus Helicopters AS332L1, registered JA6717 and operated by Nakanihon Air Service, dropped the contents of an underslung bucket, a 2.7t load of stones, immediately after taking off from the Kojima temporary helipad in Kitagawa-village, Aki-gun, Kochi Prefecture.  The helicopter was ferrying supplies to a construction site, operated single pilot with a crewman (‘onboard mechanic’).

According to the Japan Transport Safety Board (JTSB) safety investigation report the crewman sought to communicate with a trainee ground crewman by radio concerning their load rigging:

….while holding a radio in one hand, and he reached to operate the transmit switch of the communication radio of the control box immediately after the Aircraft took off from the cargo sling point. 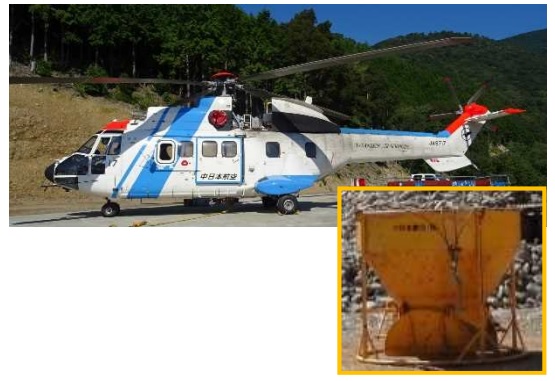 At this time, he mistakenly operated the open/close switch for the bucket instead of the transmit switch, and as a result the bucket opened and the stones (approximately 2.7 tons) fell [approximately 80m from the helipad].

The aircraft retuned to the temporary helipad on what was the aircraft’s 59th helicopter external sling load operation (HSELO) flight of the day.  There were no injuries or damage due to the inadvertent load drop.  JTSB report that:

….the onboard mechanic [who had 23 years experience in the role] was not feeling fatigued. In addition, at the time that he attempted to operate the send switch, the onboard mechanic was thinking about how to warn the trainee and was not looking at his hand.

The JTSB explain that:

The control box used to operate the external sling system including opening and closing of the bucket and to operate the radio was installed on the forward left side of the cabin behind the cockpit seats. The onboard mechanic was in charge of operating it.

The bucket open/close switch is a push button. The bucket opens during the time the button is pushed. The transmit switch of the communication radio is installed on the lower front side of the control box. Moving the switch down (to the “RAD” position shown below) puts the radio in the transmit mode. 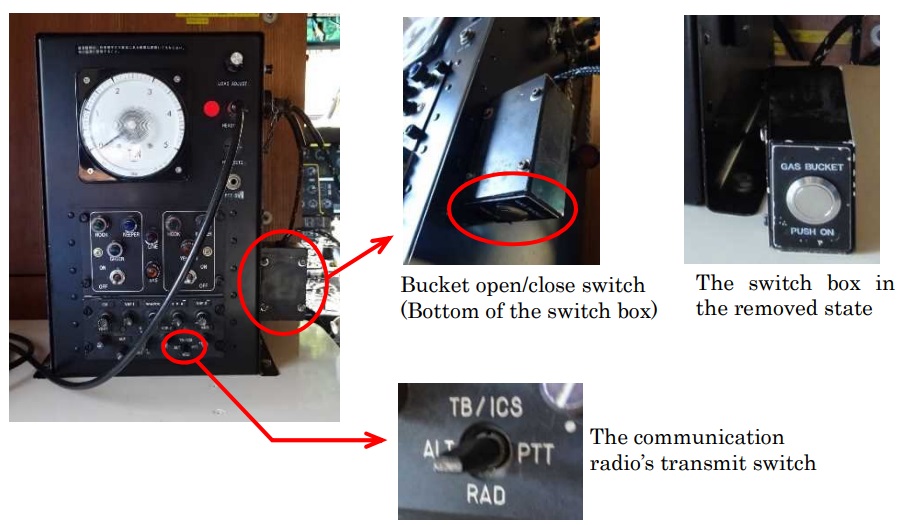 The JTSB say (our emphasis added):

It is certain that the onboard mechanic had received the necessary education and training.

Regarding the onboard mechanic operated the bucket’s open/close switch by mistake instead of the communication radio’s transmit switch, it is probable that this occurred when, while in a state in which his attention was focused on thinking about how to communicate a warning to the trainee and his attentiveness to the bucket’s operation was faded, the onboard mechanic unintentionally operated the bucket’s opening, which was an action that he had been conducting repeatedly until that time.

Additionally, it is somewhat likely that the onboard mechanic did not notice the mistake in the switch he was about to operate because he was not looking at his hand when operating the switch.

They go on to explain (again with our emphasis added):

It is probable that using a mechanism that requires the operation of multiple switches to open/close the bucket or a switch fitted with a guard, etc., would be effective measures for preventing wrong operation.

Such a “dual actuation device” is required when human external cargo is involved and is eminently sensible when operating with large loads that could do considerable damage on the ground if inadvertently released.

The operator did sensibly and proactively modify their fleet to install “an additional toggle switch in order to prevent wrong operation…so that open/close operation for the bucket cannot be performed without a simultaneous operation with the existing switch”.  As we discussed at a recent presentation at Helitech International 2018 we again highlighted the importance of design in minimising the potential for errors to occur.

Its difficult to see that, as described, this went beyond the simplistic approach of blaming the individual and telling everyone not to make the same mistake.  Even if a more sophisticated approach around skills to manage distractions and verifying before acting, such education and a safety notice would still be a low value intervention.  Such actions are sometimes preferred by managers who want to deflect all responsibility to front-line personnel.

As discussed below this was the operator’s second lost load in a year.  In that case re-education of maintenance personnel was the only safety action.