Recently a dramatic video of a helicopter crashing after becoming connected to an electricity pylon has been doing the rounds on social media.  Invariably the video, in which the pilot dies, was posted ‘for clicks’ without any context or explanation.

The US National Transportation Safety Board (NTSB) has in fact reported on this 2017 accident which is certainly of interest for the utility external load sector undertaking so called ‘stringing’ operations.

However, very strangely the key component relevant to the accident was never recovered, investigators seem to have misunderstood their own laboratory’s report on another component and the NTSB conclusions omit to identify the evident failure of a shear pin to correctly perform its safety function as a factor. 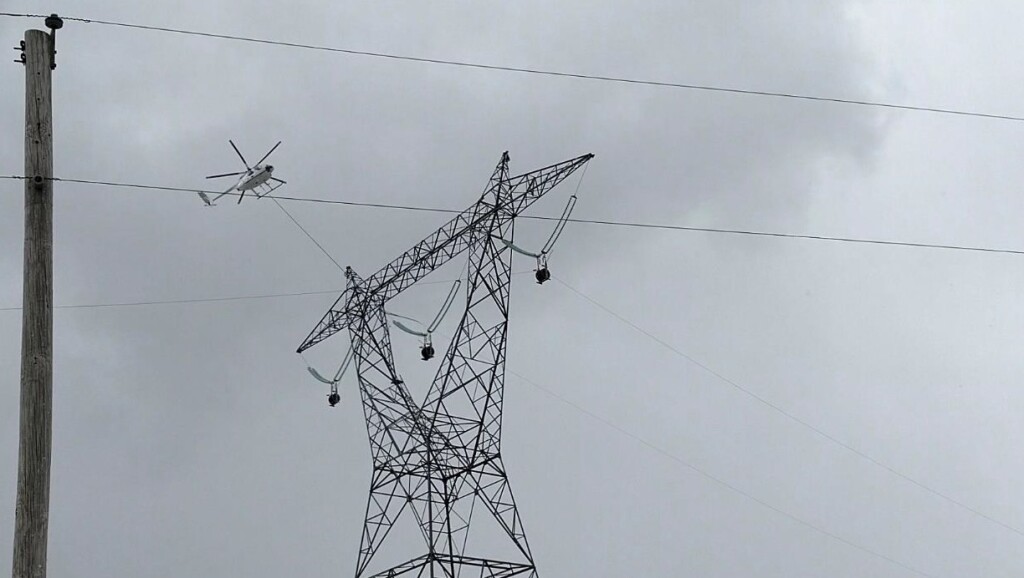 The purpose of the flight was to thread a braided metal sock line through the center of a tower structure and pull the sock line to the next tower.  …weather conditions consisted of an overcast cloud layer, light and intermittent snow, and wind gusts of unknown speeds reported by witnesses.

The helicopter was equipped with a [Colorado Helicopters] side pull hook assembly [STC SH5230NM] that attached the cargo hook to the left cabin step position on the helicopter.  The system is certified for a maximum side pull load of 1,900 lbs., which is safeguarded by a breakaway swivel; the two-piece breakaway swivel is held together with a calibrated shear pin. If the airframe is about to be overloaded, the shear pin is designed to break and allow for the long line to fall away… 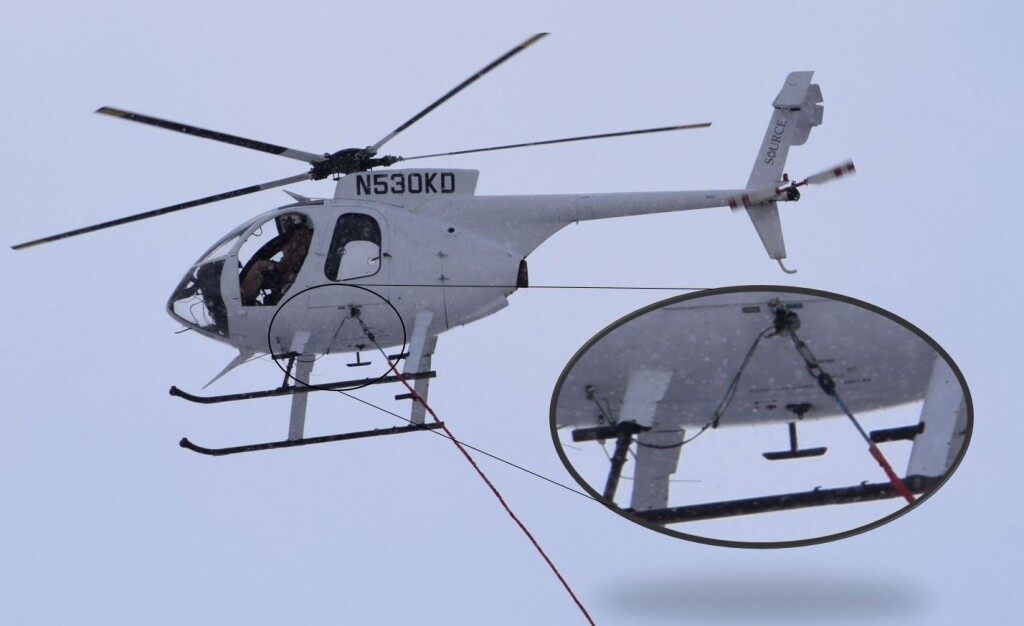 A 50-ft blue nylon long line with a protective sheath was attached to the cargo hook, and a grappling hook was attached to the other end of the long line. The grappling hook was connected to a large [200 lb] metal needle that enabled the pilot to thread the sock line through the tower structure. The needle was equipped with two hooks that were used to attach it to the tower structure.  The aft end of the needle was connected to the metal sock line via metal carabiners and a non-breakaway swivel. 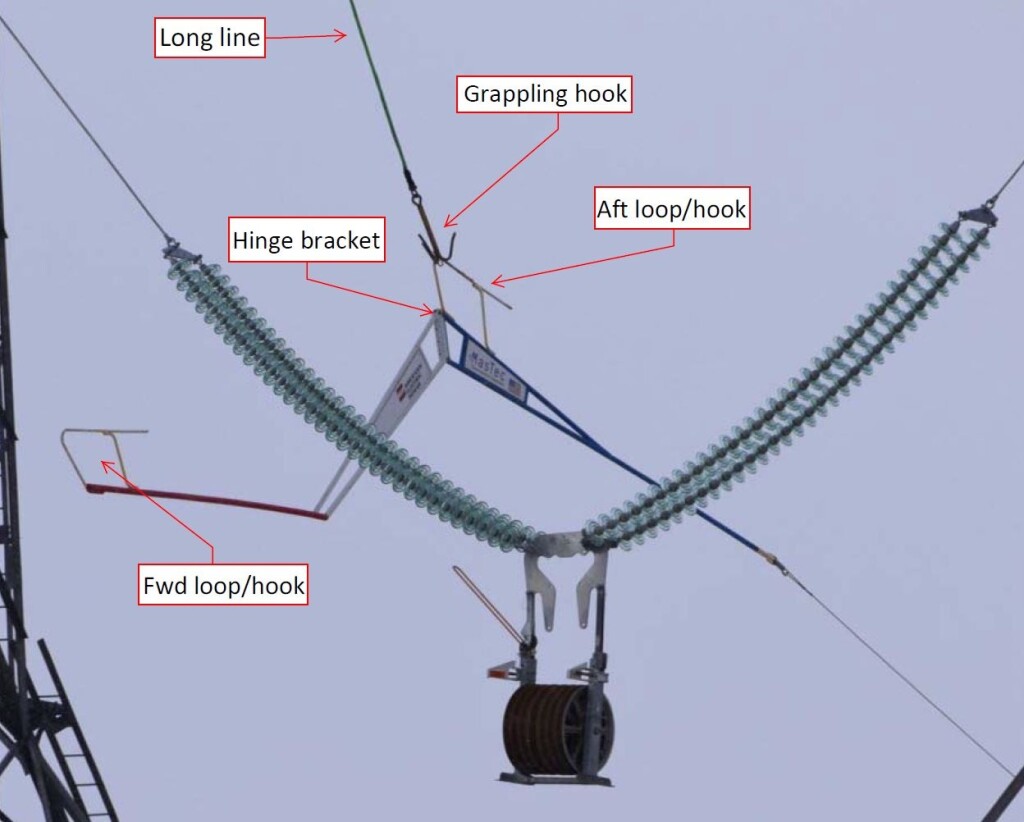 The sock line is then inserted into the cable drum via a side gate as shown in this video.

The tension on the sock line was controlled by a triple drum puller located about 2 miles (and 10 towers) north. 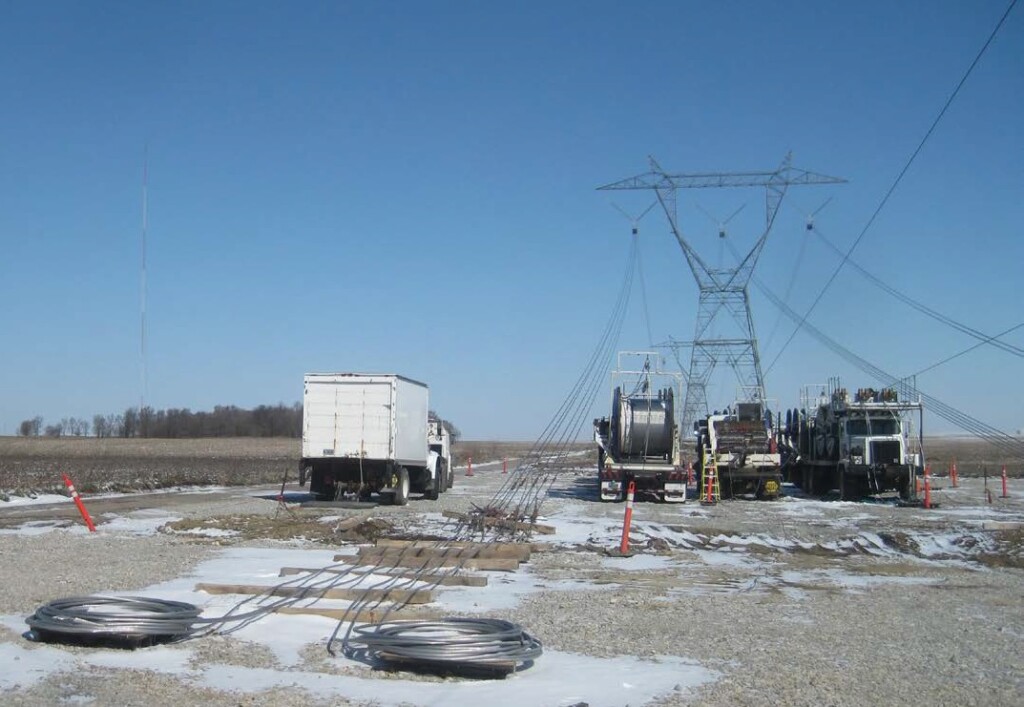 Each of the three drums contained sock line for one of the three phases of the tower. The puller featured a manual brake that was operated by a power line construction employee. The employee and the pilot communicated via radio as the pilot would announce his operational intentions. 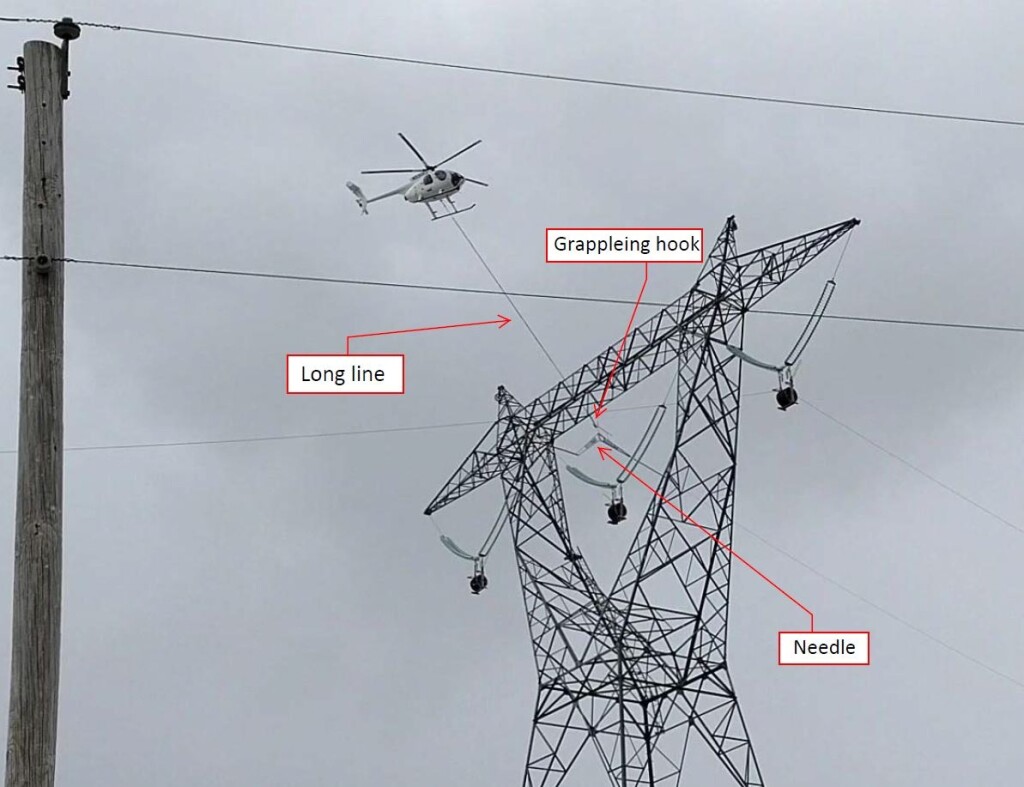 The employee stated that the pilot had threaded the sock line through nine towers. 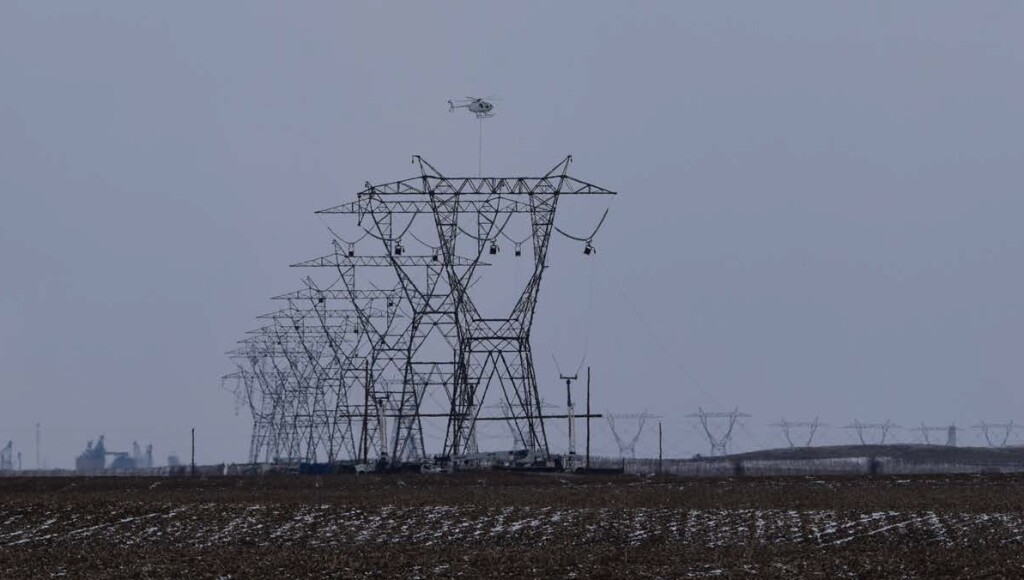 The pilot announced over the radio that he was slowing and approaching the tenth tower. The employee later heard yelling over the radio and then silence. The amount of brake applied on the sock line at the time of the accident was not determined. 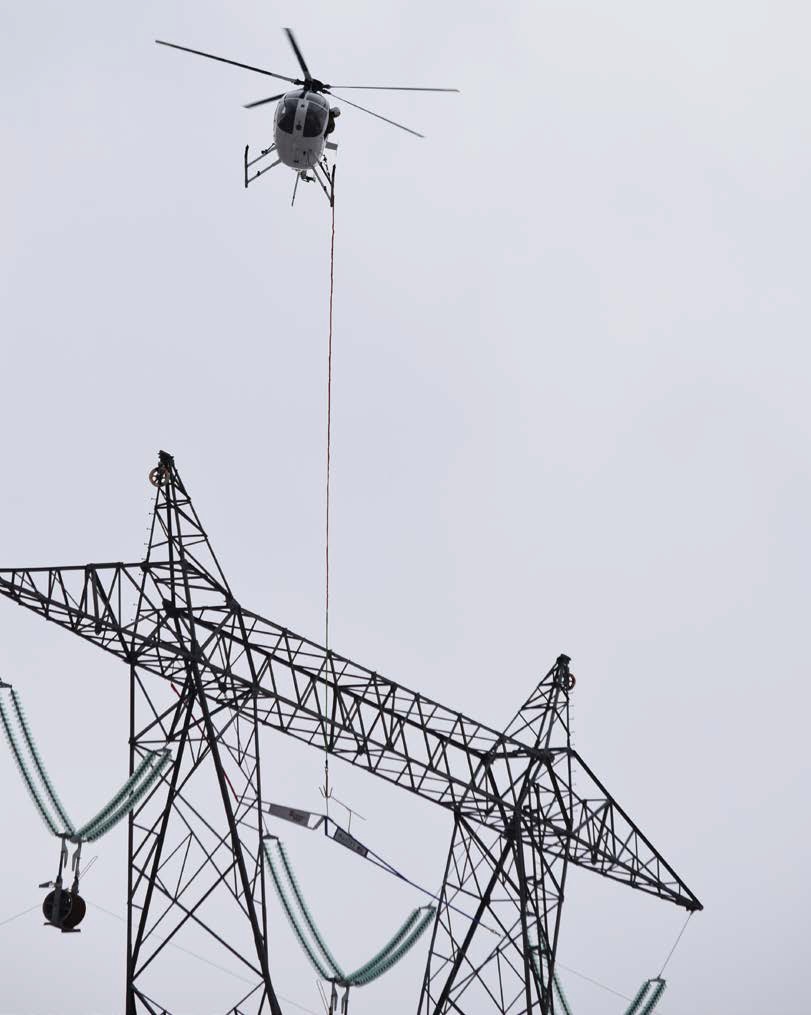 Video evidence showed the pilot was attempting to attach the needle’s front hook to the tower when the accident occurred.

Review of the video showed that the pilot attempted twice to hook the needle to the tower and was unsuccessful each time. 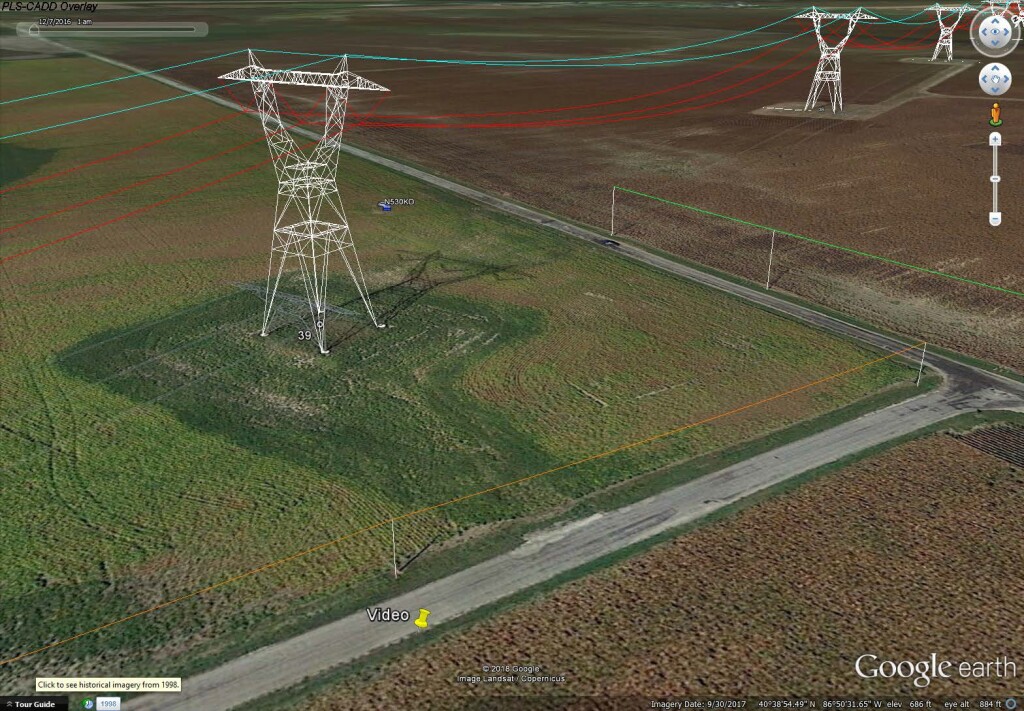 The needle’s aft loop, which the grappling hook was attached to, separated from the needle and was thrown to the south. While still airborne, the helicopter made a descending 180° clockwise rotation, as viewed from above, with the long line still attached. The rotation stopped as the helicopter faced north then rolled left about 80°. 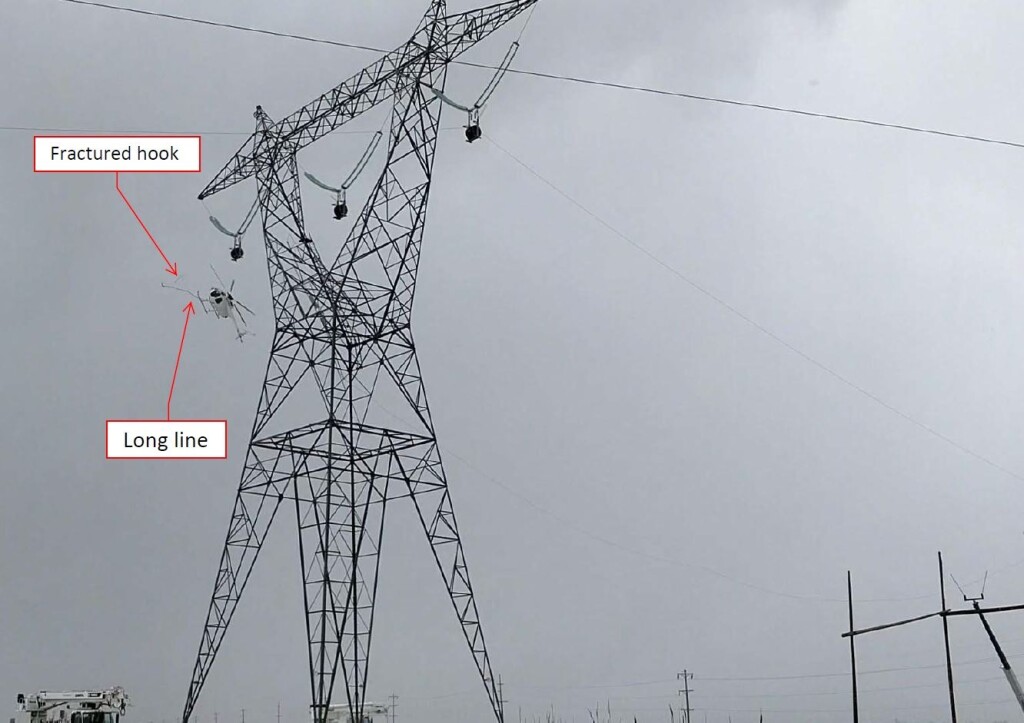 The tailboom separated about mid-span, and both the tailboom and the rest of the helicopter descended and impacted the ground. 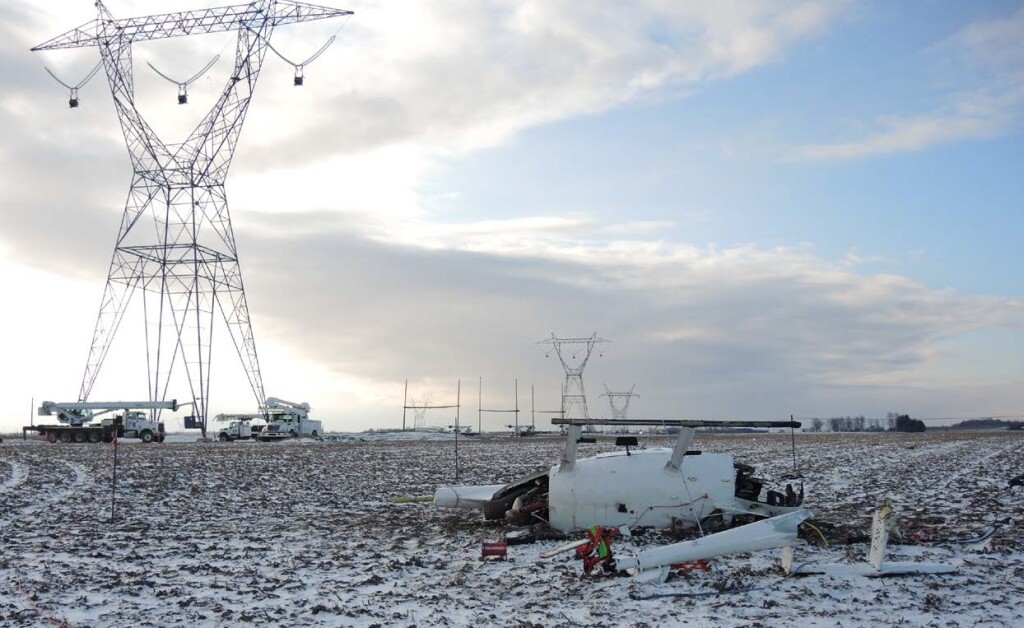 The long line was separated in tension overload near the top of the line, a few feet from the cargo hook. 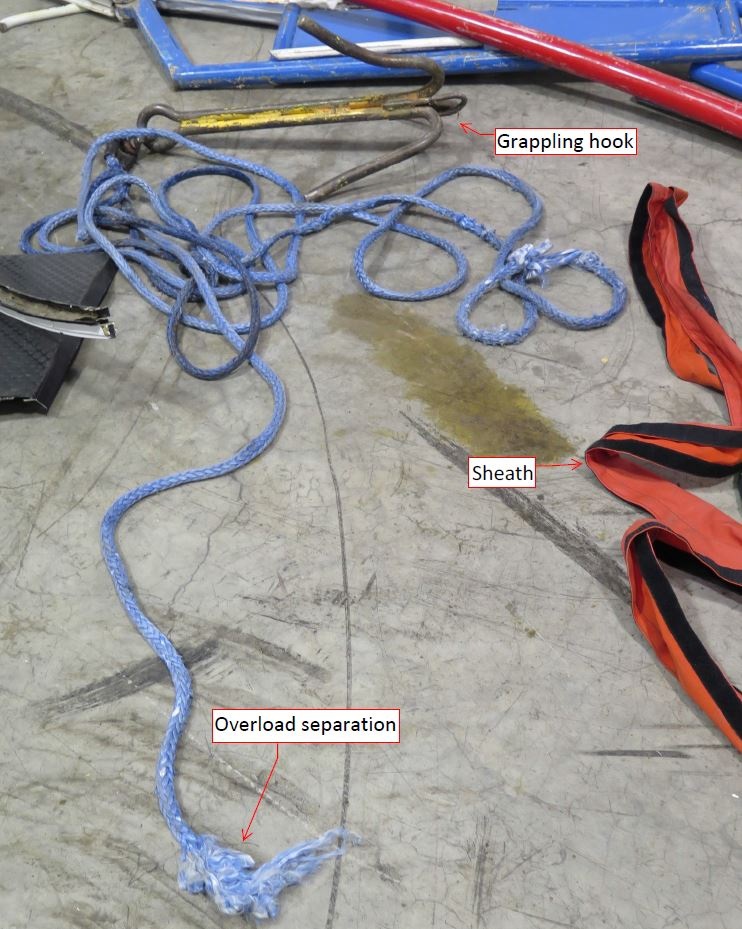 The cargo hook was found open at the accident site.

The breakaway swivel, its shear pin, the two carabiners that hooked to either side of the swivel, and the upper portion of the long line were not found during the investigation.

Examination of the wreckage did not reveal any mechanical malfunctions or failures to the airframe or engine that would have precluded normal operation.  The NTSB Laboratory examined the needle and found that…

…the aft closed loop (the point of attachment of the grappling hook) fractured at two locations. The fractures were through the round solid bar portion and intersected a portion of the weld at the frame portion. A bench binocular microscope examination of the fracture faces revealed rough texture features on slant planes consistent with ductile-bending overstress separation, with no evidence of a pre-existing crack, such as fatigue crack. The welds at the fracture face showed no evidence of defects such as porosity. 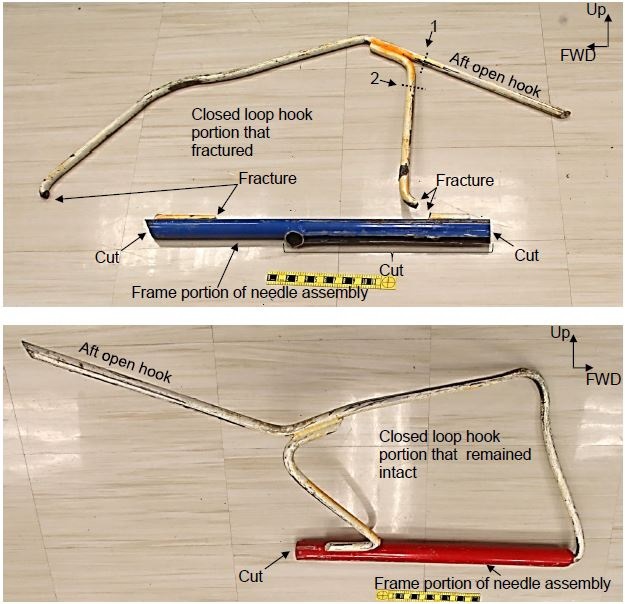 The needle was made from the 1-inch diameter solid round bar.  The load required to fracture the bar….

…under constant tensile load was calculated to be 73,790 lbs, which is nearly 40 times greater than the load required to break the side hook’s breakaway swivel shear pin.

In their analysis the NTSB state unconvincingly that “the fracture of the needle was most likely the result of the needle impacting the tower”, as the laboratory report actually identified an overstress failure.

Since the breakaway swivel could not be located the investigation was unable to determine why it did not separate as designed during the event when the helicopter was tethered to the tower.

The NTSB oddly comment that “there is no evidence that system did not function as designed” but paradoxically do on that “the system should have separated due to tensile loads transmitted to the shear pin at the time the helicopter became tethered then moved away from the tower”.

The pilot’s failure to ensure that the needle did not entangle with the tower’s vertical lattice as he moved the helicopter rearward, which resulted in the helicopter becoming tethered to the tower and a subsequent loss of control.

The loss of control was only due to the continued tethering of the helicopter.  The failure of the cargo hook 1,900 lbf swivel shear pin to have sheared, despite being loaded 40 times above its designed failure load was critical to the accident.  The failure to subsequently find either the breakaway swivel or its shear pin at the relatively small and open accident site is very concerning.

The shear pin is designed to be easily replaceable in anticipation of occasional failures when lines snag for example.  The failure to locate it means it was therefore not possible to confirm a correct and conforming pin had been installed. The failure of the needle at a 73,790 lbf load instead of the shear pin at 1,900 lbf suggests the pin fitted was not the designed part.

Its therefore very surprising that the failure of the installed pin to shear was not determined to be a contributory factor. 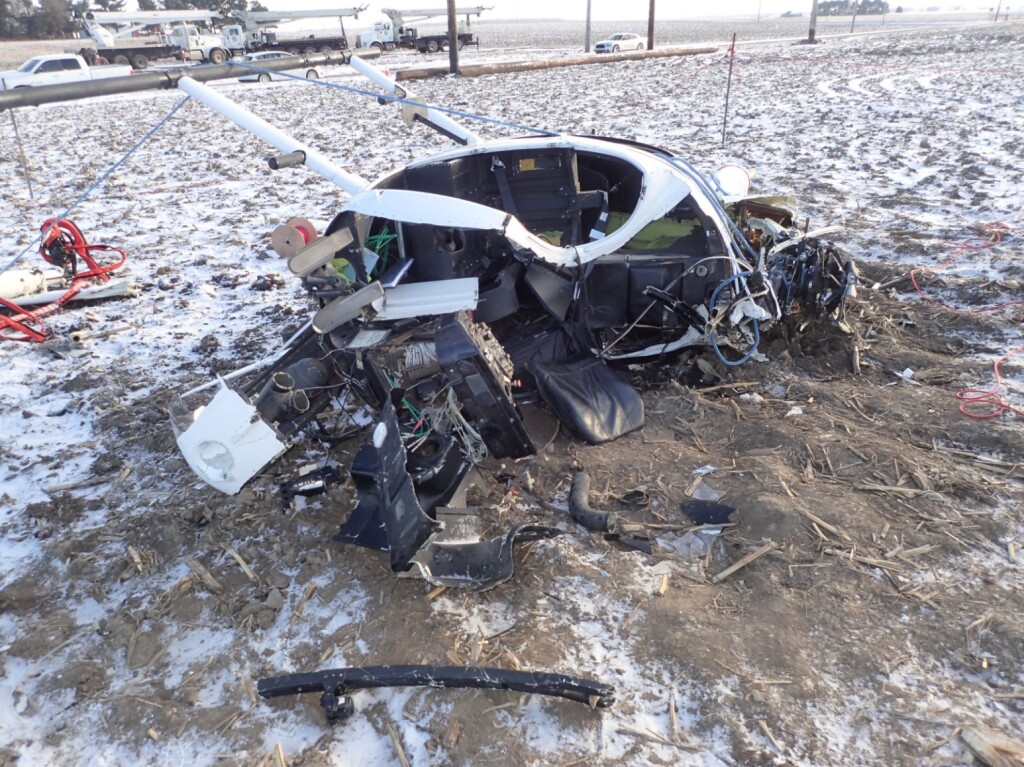