On 20 November 2018 Airbus Helicopters AS350B2 EC-MVV Helitrans Pyrinees was engaged in a Helicopter External Sling Load Operation (HESLO) connected with the construction of an electrical power line when the load contacted a live electrical cable, resulting in the electrocution and serious injury of two ground personnel. 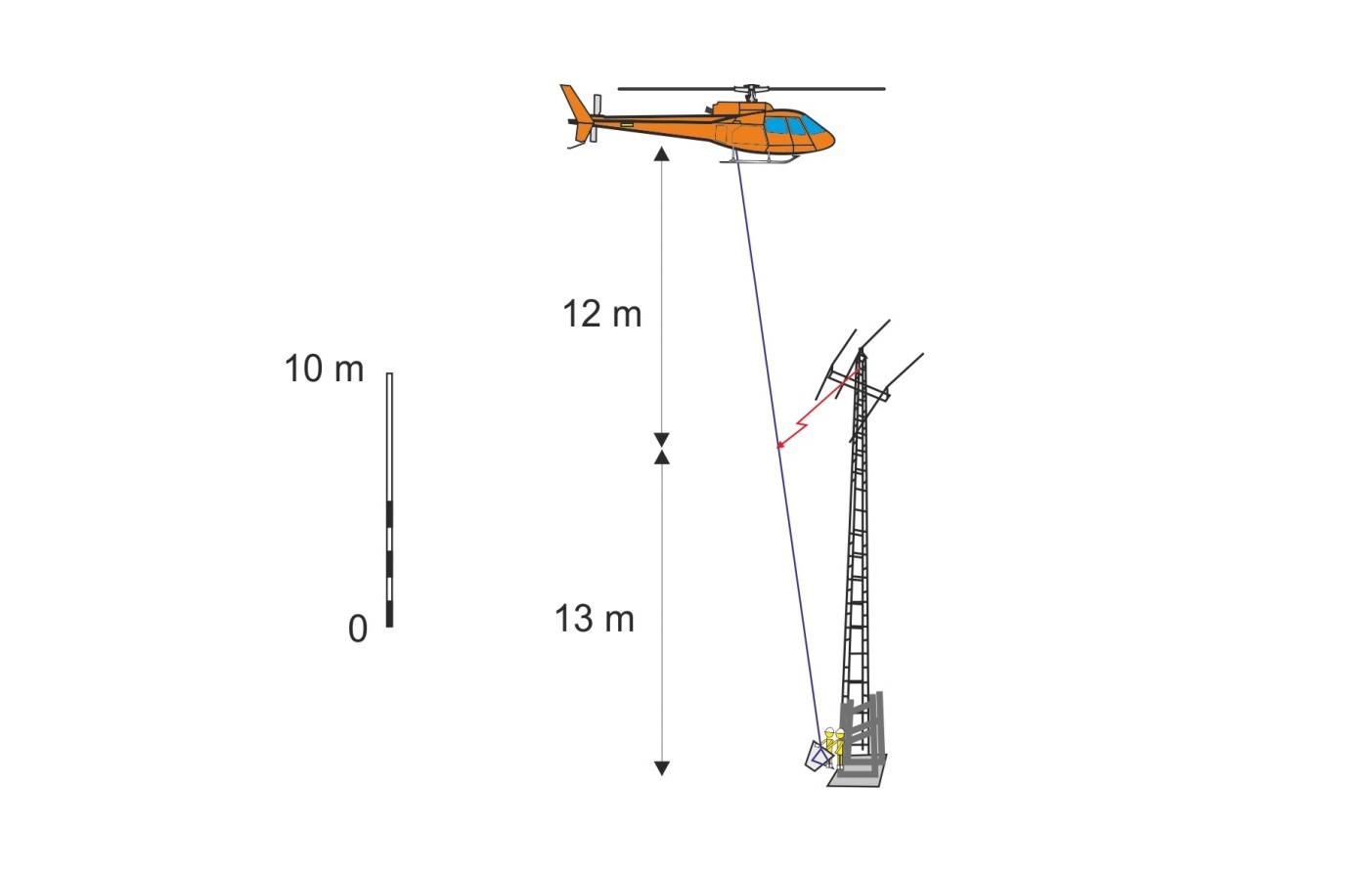 The Spanish Comisión de Investigación de Accidentes e Incidentes de Aviación Civil (CIAIAC) explain in their safety investigation report (issued in February 2020) that Endesa Distribucion Electrica, had contracted to Sistem Melesur Energia to upgrade a 25 kV overhead line in the Ribera d’Urgellet municipality in the Pyrenees, replacing the old pylons.  In turn, they had chartered the Helitrans Pyrinees helicopter to support the transport of concrete for the tower foundations. 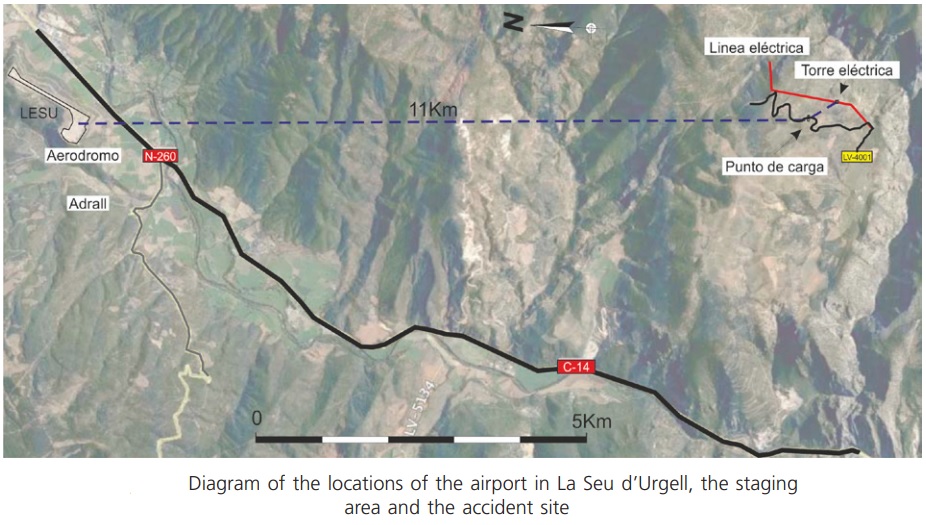 The helicopter left the La Seu d’Urgell airport at 09:55 for the material staging point about 11 km away, where a 22 m polyester sling with a hook to transport a concrete bucket to the site of a new pylon, 530 m away. 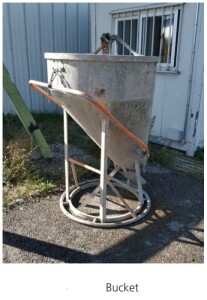 The location was mountainous and adjacent to the existing tower, which was still in service. The towers were just 64 cm apart at the closest point and 125 cm apart at the most distant point. 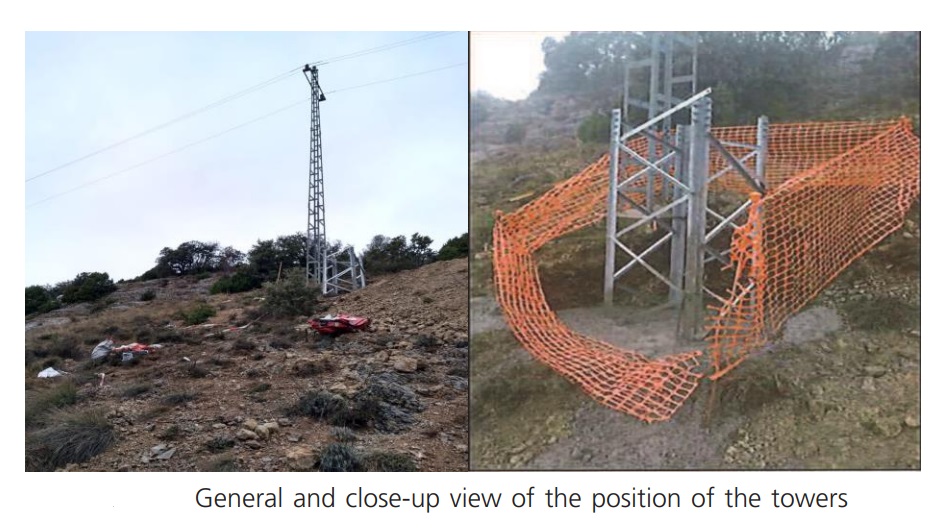 The helicopter lifted the bucket at the staging site and then proceeded to the work site. Once it was past the existing power line, it descended while turning left to reach the unloading point…

The helicopter hovered perpendicular to the power line, some 12 m above it, leaving a safety buffer between the sling and the power line to keep the sling from breaching the danger zone of the power line. Once the bucket was close to the ground, two operators on the ground unloaded the concrete by actuating the associated mechanism. The concrete was then poured in the foundation for the new tower. Once the concrete was unloaded, the helicopter climbed again and moved backward to gain enough altitude to clear the existing line, and then proceeded to the staging area.

After pouring the initial batch of concrete, which lasted until about 11:05, the activity was stopped for a break and also to refuel the helicopter.  At around 11:40, the aircraft took off once more to resume the activity. 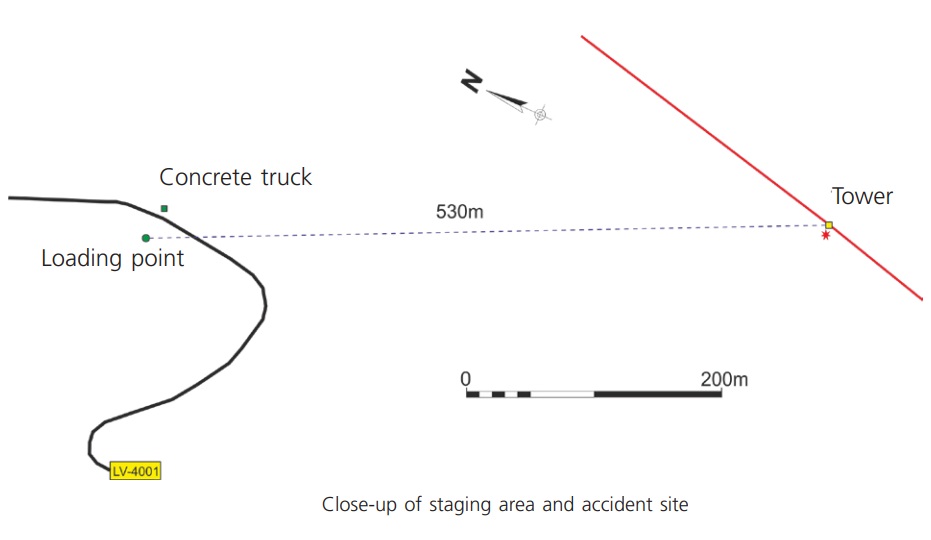 [In] his statement, the pilot noted that when the work began, the weather conditions were good, and that they worsened over the course of the day. In fact, they had discussed stopping, but since there were buckets full of concrete, and they had never before been left full, they decided to continue.  It was drizzling at the time of the accident.

After several rotations, all of them to the same concrete unloading point, and with the aircraft in place to unload a new batch, the pilot noticed a spark and a flashover. At the same time, he saw that the two operators who were handling the concrete bucket…fell to the ground.

The pilot immediately flew to the staging area where, after placing down the concrete bucket and unhooking the sling, he picked up company personnel who could help the two operators on the ground.

The two workers were hospitalised with serious injuries.  The sling and bucket were found to be scorched but the helicopter was undamaged.

Spanish health and safety regulations would have required a 3 m safety distance.  Testimony is that workers were at 1.5-2 m.  A 3.4 m plastic tubular chute was available at the site that could have been used to keep >3 m away, but this was not utilised.  The method statement for the task required a 3-person ground party, two to receive the load and a third to communicate with the pilot.  In this case there were only the two to receive the load.  Furthermore, the operator’s Operations Manual requires a ‘pilot’s assistant’ aboard the aircraft and there was not.

The briefing was held without the pilot and did not consider the electrical risks.

The sling consisted of an inner polyester core covered by a braided polyester layer. This was surrounded by a further polyester layer with four braided copper wires individually covered with Nomex insulator,  This provided an insulating capacity of up to 30,000 volts say CIAIAC. There were then two further layers of polyester, the latter twisted to provide abrasion protection for the sling. This layer was orange to be visible.  The manufacturer’s representative stated that “if the product is sufficiently close to an alternating current power line, arcing can occur at a distance of 50 cm”.  CIAIAC believe that in the drizzle the sling lost its dielectric qualities.

The inspection of the sling also revealed that the layers that cover the central core were not cut or damaged, but the burns on the surface polyester layer had caused a short circuit, which is consistent with a spark propagating to the ground through the wet surface on the sling. 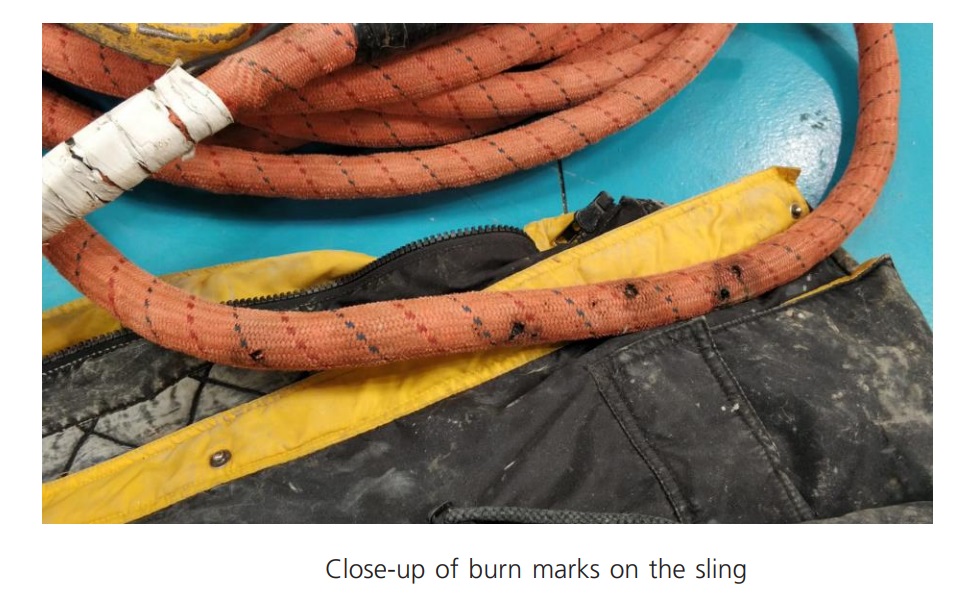 …even though conditions were not limiting for flying, they were for an activity that was being carried out in the presence of an energized power line.

It seems that the possibility of not using, or even wasting, the concrete that had already been loaded into some of the buckets prompted the decision to keep working until they were fully unloaded, despite the worsening atmospheric conditions.

The accident occurred when the safety zone for the medium-voltage power line was breached due to the incorrect execution of the concrete unloading operation as a result of failing to adhere to the operating procedures.  The weather conditions were conducive to the propagation of the spark.

The CIAIAC report doesn’t explain why the briefing was perfunctory and the team under-sized.  The lack of focus on electrical risks is surprising but suggests why the 3.4 m chute may have been ignored.

While it is stated that the helicopter was ‘undamaged’ it’s not clear what inspection was conducted.  A post lightning strike inspection may well have been prudent as arcing damage can affect a range of critical components.

EC-MVV was involved in a further accident on 6 July 2020 when the two occupants were killed during another power line construction project.  That CIAIAC investigation is ongoing but it reported that during HESLO operations a member of the ground party injured their hand and so the pilot landed to transfer them to hospital.  For reasons yet to be established the helicopter “fell to the ground” during that flight and suffered a post-crash fire.