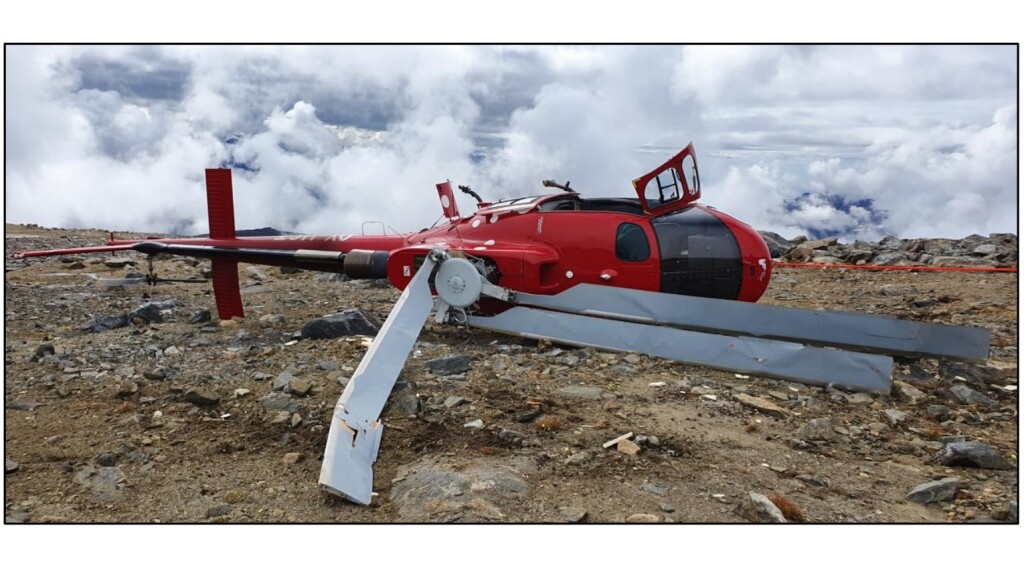 The Accident Investigation Board Denmark (AIBD) explain in their safety investigation report that the helicopter was moving fuel with a 30 m long line from a barge to the mountaintop Telesite Dye One communication site.  This waa at a former Distant Early Warning Line radar site at 4757 feet AMSL on Qaqatoqaq, near Sisimiut (formerly Holsteinsborg). 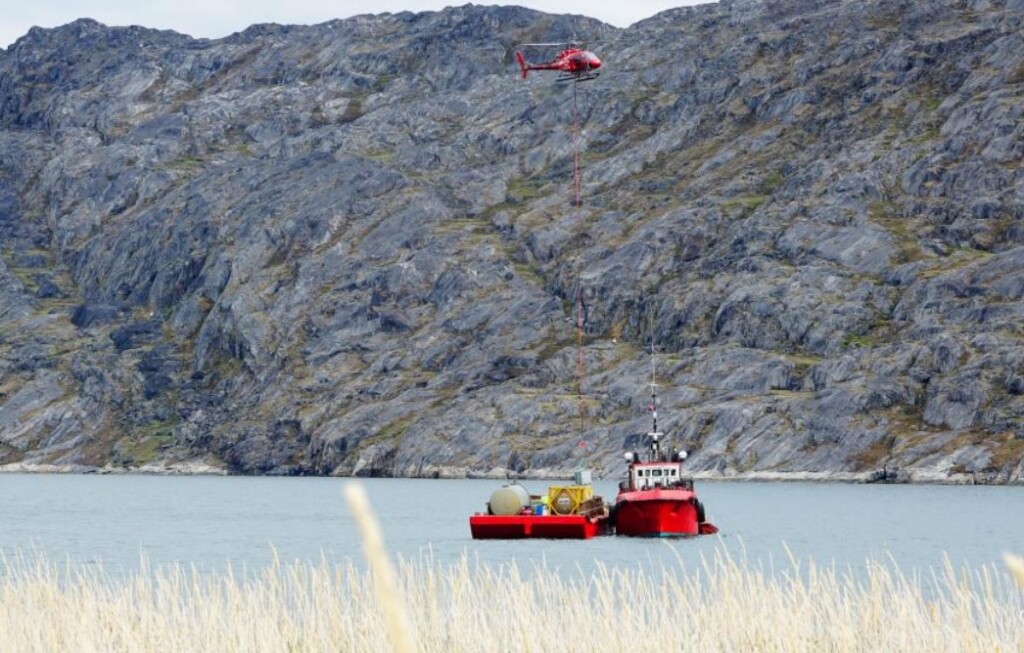 The pilot recalled the wind was 210°, 5 knots, no turbulence and there were fog and cloud in the vicinity of the telecoms site. 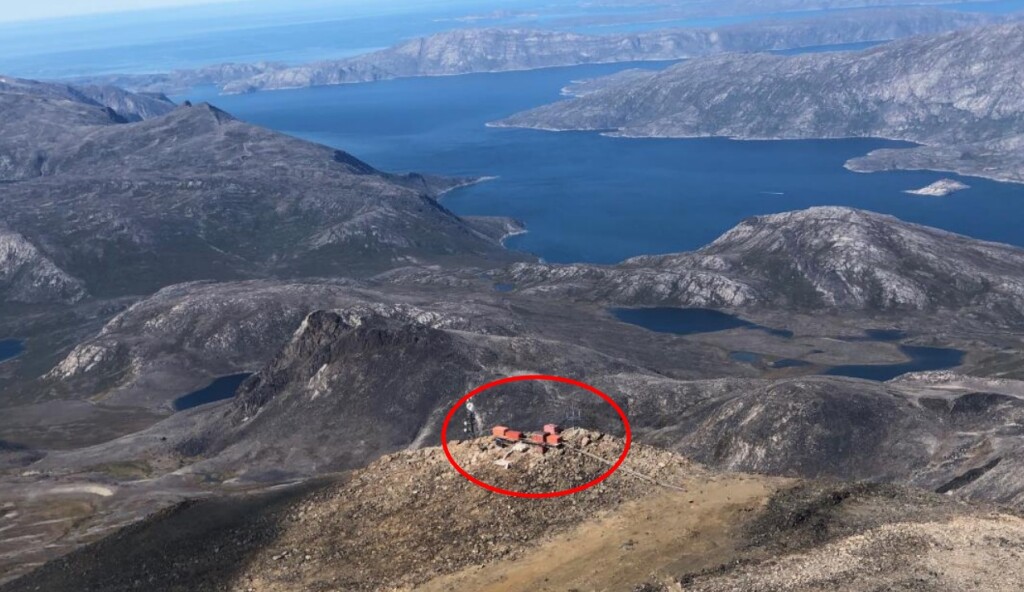 The pilot was 36, had flown 3037 hours in total and had “extensive firefighting and mountain flying experience”, including operating with longlines.  The pilot was on a short term contract and completed their last Operator Proficiency Check (OPC) 4 months before, which included demonstrating a whiteout landing.  They had also completed the operator’s HESLO check in March and had been observed for 2 days in line flying under supervision.

The pilot had already successfully made 28 of the 30 planned movements of what appear to be 1000 litre IBCs, and the pilot had discussed with a Task Specialist (TS) at the barge the possibility of doing a second tasking before sunset. 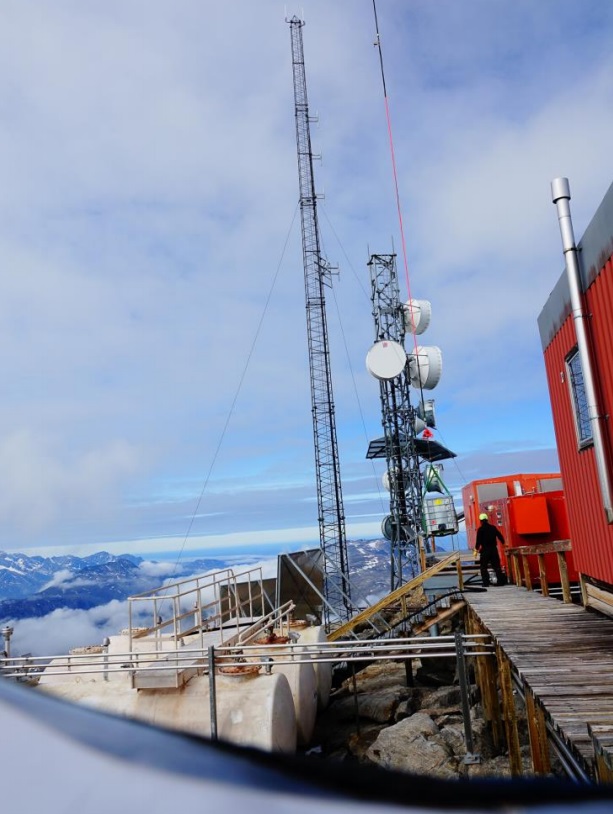 On the 29th lift, the helicopter started to climb, and… 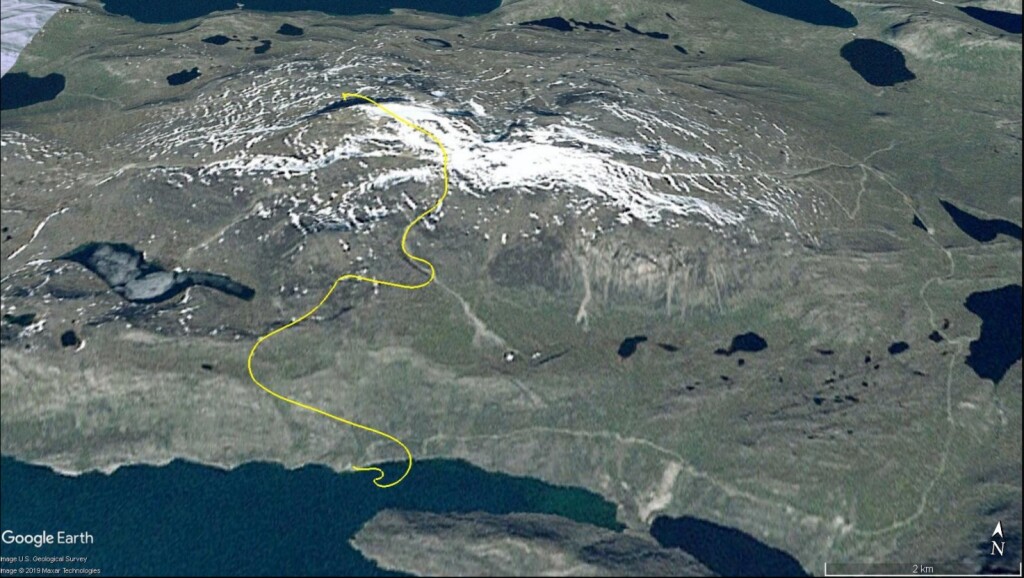 After several turns during climb and at various airspeeds, the pilot at approximately 4900 feet MSL on a westerly track, approached the agreed-upon delivery point, which was a footbridge along the station buildings.

The pilot was focused on the delivery point, a footbridge along the station buildings, and manoeuvring the helicopter.  While not explained, this presumably made filling the site’s fuel tanks easier for workers at the site than if the fuel had been delivered to the lower helipad. 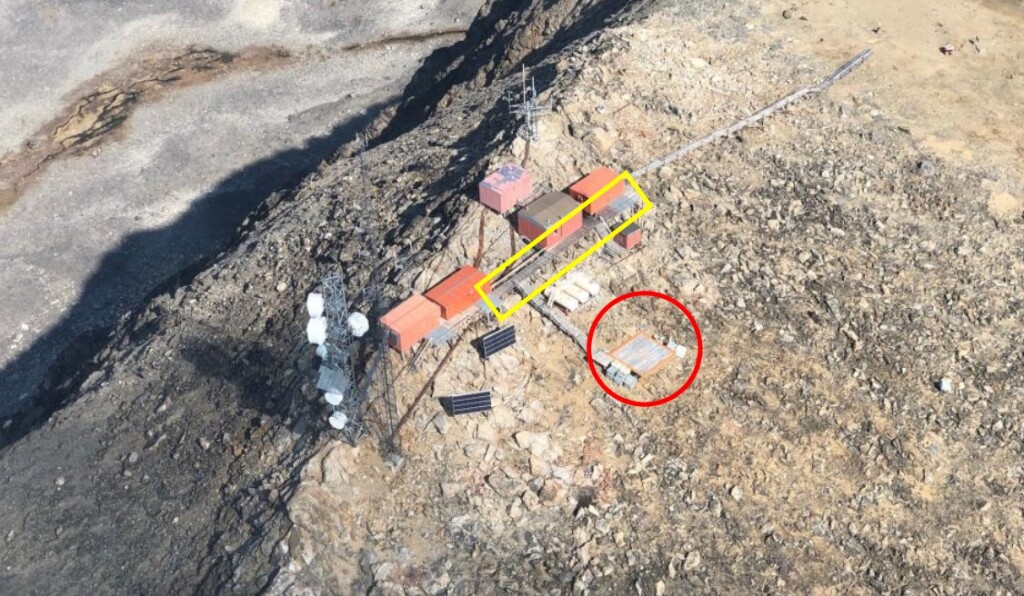 While approximately 150 feet above the ground, due to clouds/fog the pilot lost external visual references and started feeling spatial disorientated. Fearing the fuel tank might hit ground personnel or structure, the pilot “abruptly started flying rearward” intending to release the load.

In a helicopter nose down attitude on a southerly track, at a high sink rate, and at a low height above the ground, the pilot regained partial visual references and noted that impact was inevitable. …approximately 100 meters downhill, the helicopter skids impacted with rocky terrain, and the long line entangled with rocks…. 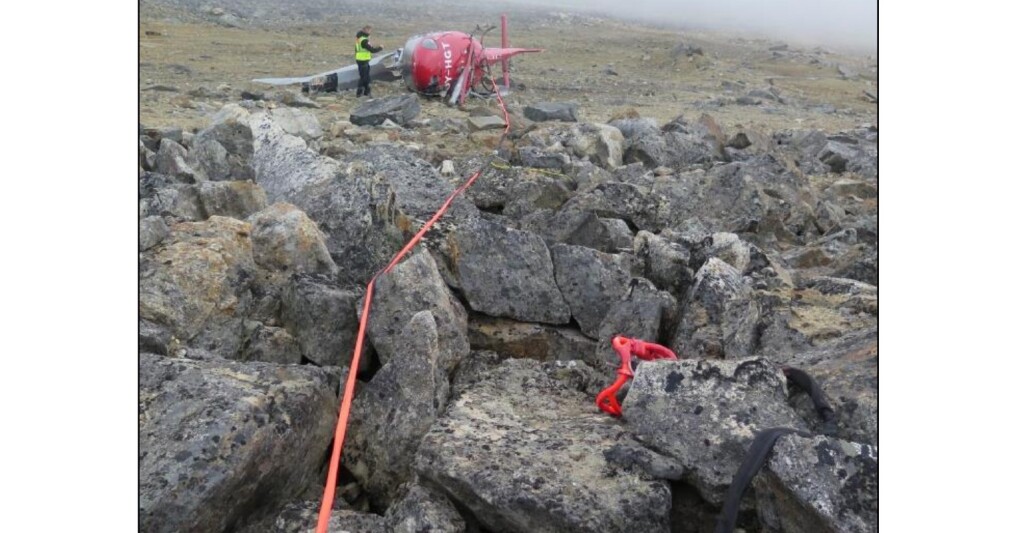 The helicopter ended up on its right hand side with the nose section facing towards Telesite Dye One. The pilot felt unharmed and evacuated the helicopter through the left hand door.

The helicopter was equipped with an Appareo Vision 1000 on-board data and image recorder. The BEA assisted by downloading data which was “of good quality and useful to the AIB safety investigation”. 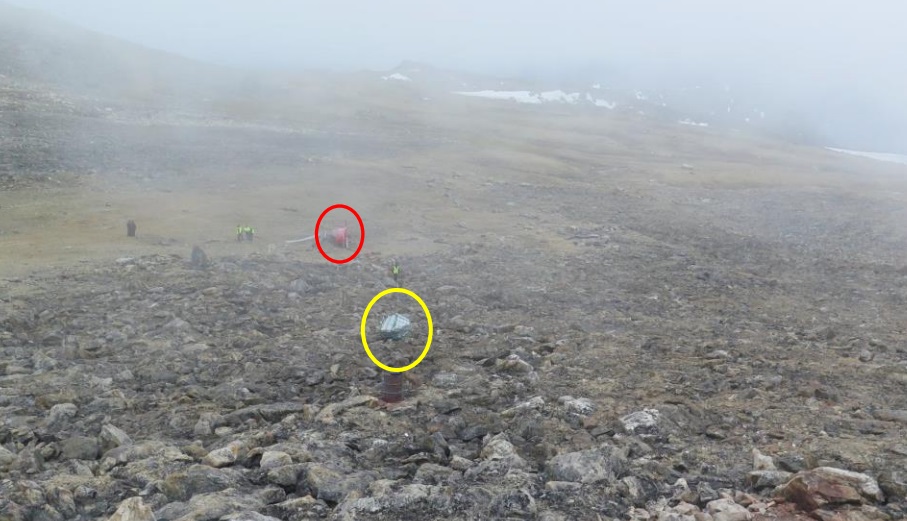 In general, when operating in specific remote and hostile areas, the access to proper and reliable weather information before flight might be difficult or even impossible, which might make the preflight planning phase and the later on operational phase unpredictable and not fact-based leading to subjective decision-making processes. The above statement is an operational condition, when operating in such specific environments, which, in the general opinion of the AIB, requires operational creativity and innovation in order to optimize flight safety.

They do note that the operational weather minima in the operator’s Operations Manual Part B was “not fully comparable to the rules of the air (BL 7-1)”.

However, to the AIB, the limitation in the standard operating procedures of a cloud ceiling of 600 feet seems to be more restrictive than the wording clear of cloud of BL 7-1 for operations in airspace class G. 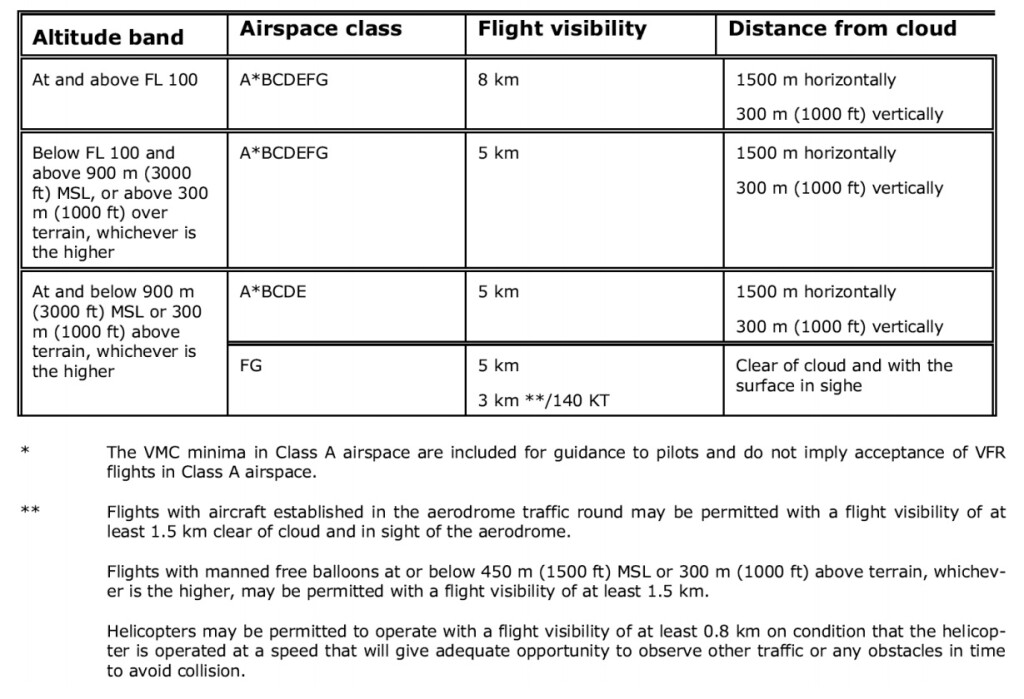 Danish Regulations on Rules of the Air (BL 7-1) (extract)

The operator categorized HESLO as a high risk SPO (Specialised Operations), seemingly due to the need to conduct the task at low height above ground.  AIB comment:

Taking into consideration that the accident flight was a high risk SPO, the AIB, from a flight safety point of view, finds the limitation on cloud ceiling rational.

At the time of the accident, the pilot had performed several sling operations from the fjord to the mountaintop and presumably had a reliable knowledge of the general weather conditions at the mountaintop.

S-turns, instead of a straight route, at various airspeeds during climb in combination with the radio correspondence between the pilot and a TS at Telesite Dye One supports the premise that the weather conditions at the mountaintop were marginal for this sling operation.

The [selection of a delivery point of the] footbridge compared to the helipad required, in the opinion of the AIB, more pilot precision and head down external focus, which in combination with the actual weather conditions at the mountaintop probably reduced and/or eliminated pilot perception of changes to the available external visual cues.

The helicopter, while positioning at the mountaintop, most likely entered orographic clouds causing loss of pilot external visual references.

Upon loosing external visual references, the pilot feared the consequences of an intermediate release of the fuel tank or a fuel tank collision with obstacles and abruptly started flying rearward. This rationale of the pilot potentially prevented a more severe outcome.

The impact of the helicopter skids with rocky terrain at a shallow angle, and the tightening of the long line slowing down the forward energy and reducing the final impact force, made the accident survivable.

Which just goes to show the dilemma drafting procedures and making decisions in an emergency!  The investigators opine that in relation to the hook release:

Taking into consideration the previous flying experience of the pilot (firefighting) and the sling operations of the day, the pilot most likely acted on stored routines…when trying to and finally successfully released the fuel tank at the cargo hook.

A potential launch of another sling operation at another location before sunset might have provoked a pilot self-induced commercial pressure and task fixation. Task fixation might have expanded the pilot risk tolerances leading to changes of perception of risks, and decision-making processes during the sling operation.

While attempting to recover, loss of external visual cues led to spatial disorientation and a partial loss of control of the helicopter.