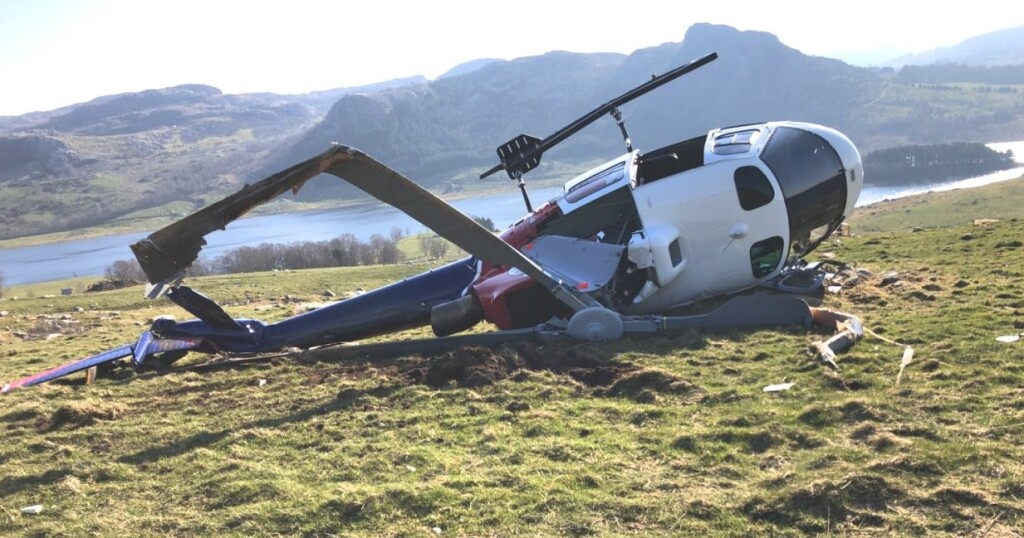 The NSIA report that the first tasks of the day for the pilot of LN-OFQ was to move a container weighing just under 1,100 kg from the rig area C42 near pylon 161 to pylon 151.

…trained as a helicopter pilot in the USA during the period 2008 to 2010. In the USA, he flew Robinson R22 and R44 and worked as an instructor for a period. He returned to Norway and completed his conversion training to obtain a Norwegian commercial helicopter pilot licence (CPL(H)) in 2011. He started working at Helitrans the same year and was permanently employed from 2013.

After depositing the load and landing alongside the pilot realised that while he had navigated to pylon 151 on the line under construction, the load was actually intended for pylon 151 on an existing 132 kV power transmission line about 10 NM further to the northeast, on the eastern side of the Høgsfjord. 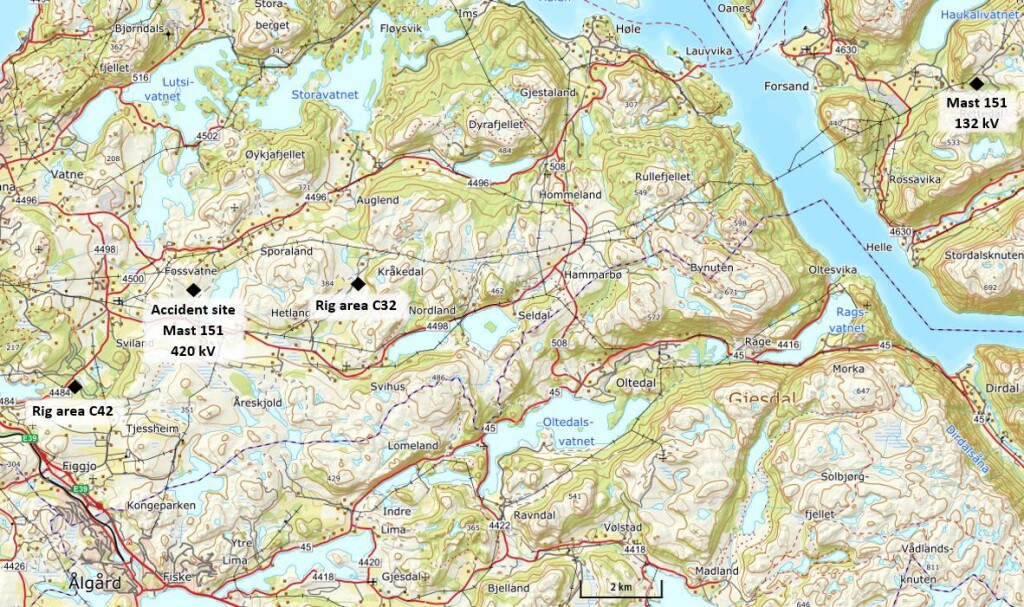 While rotors running he…

…called the client Dalekovod using his mobile phone to clear up the misunderstanding. The commander said he was in doubt as to whether he could fly the helicopter across the Høgsfjord in the prevailing winds. He then called a colleague in rig area C32, approximately 2 NM east of the helicopter. They discussed the wind conditions. Following an assessment, the commander decided to fly the helicopter over to his colleague in rig area C32 and see how the conditions developed.

The commander has explained to the NSIA that he felt no pressure from the client when he made the decision to move the container. For him, it was only natural to bring it to an easily accessible place and not leave it by pylon 151.

After almost 7 minutes on the ground, the pilot entered a low hover with the load to the front and right of the helicopter.  He then turned anti-clockwise “ensuring that the line was getting taut in view down below on his right-hand side”. The NSIA note that data from the Appareo Vision 1000 lightweight video and flight data recorder fitted aided the investigation and showed that:

…the helicopter started rolling to the left, at the same time as the nose started to pitch up. The commander moved the cyclic stick forward and to the right to counteract this movement, but the movement continued. When the helicopter had rolled 11.6 degrees to the left and with an upward nose angle of 6 degrees, moving the cyclic stick all the way to the right caused the commander’s right foot to slip off the right pedal. At the same time, a green diode on the cargo hook load indicator came into sight on the far right in the image, indicating that the load on the hook was less than 100 kg at the time. The helicopter then started turning to the left. 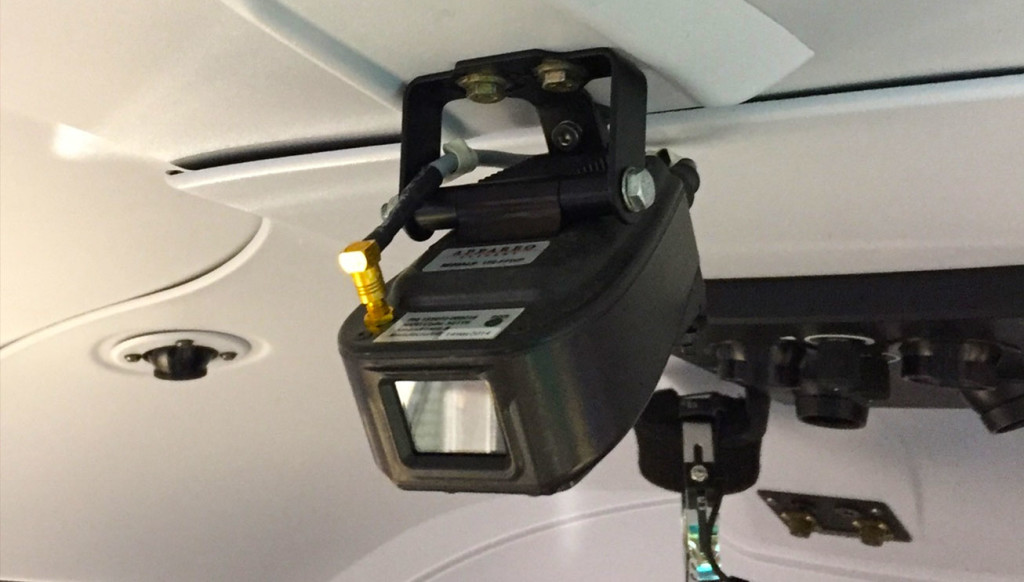 Within 7 seconds of being in a normal position…

…the helicopter heading passed 59 degrees during the leftward turn, at the same time as the left roll to reached 31 degrees. It had a nose high angle of 5.1 degrees. Two green lights on the cargo hook load indicator indicated that the load on the hook was at least 100 kg.

Eight seconds after the helicopter was in a normal position, the commander activated the trigger switch on the cyclic stick to open the cargo hook. The helicopter was still turning to the left and had reached a heading of 24 degrees. The roll was 18.6 degrees to the left, and the nose had dropped to -4 degrees. 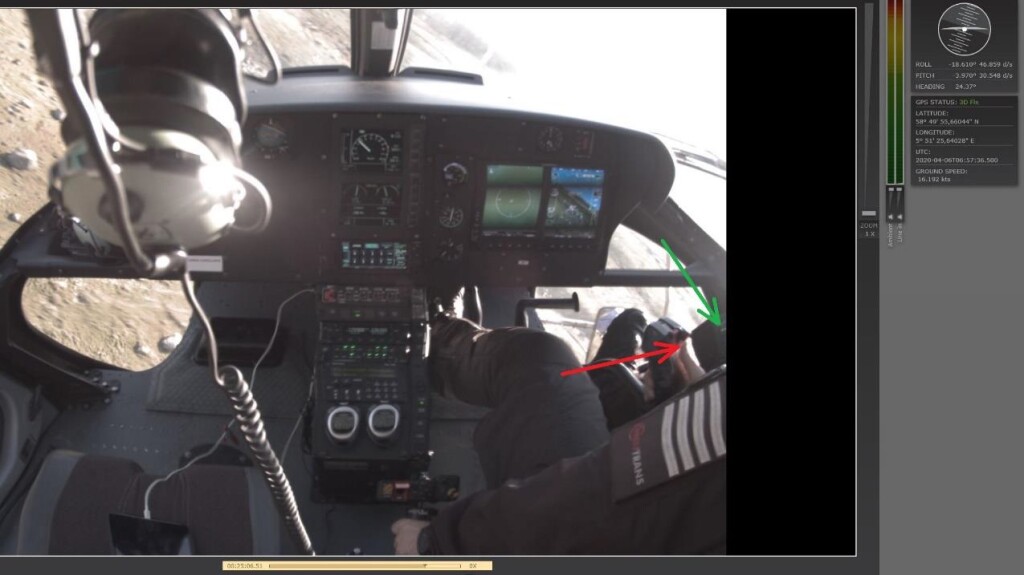 Two green lights (green arrow) can be seen on the far right in the image, indicating that
the cargo hook load has exceeded 100 kg. The commander pressed the switch on the cyclic stick
to release the cargo (red arrow). At this point in time, after spinning out of control, the helicopter
had turned 116 degrees to the left. The nose angle had dropped to -4 degrees. (Credit: NSIA)

As the helicopter continued to turn, it started to roll to the right.

Nine seconds after being in a normal position, the helicopter had continued its leftward turn to a heading of 301 degrees and the angle of roll was 32 degrees to the right.  The rotation continued, and the helicopter was getting close to the ground.

Twelve seconds after being in a normal position, the helicopter’s main rotor hit the ground and the helicopter ended up lying on its right side with its nose pointing south. The helicopter had thus almost completed a full rotation to the left before it came to rest 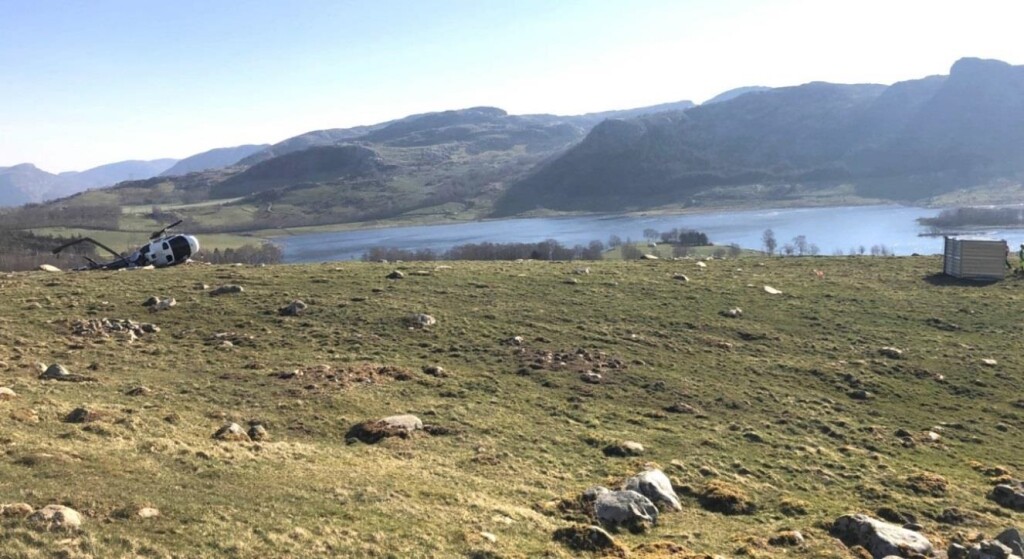 When the helicopter hit the ground, various objects, including a tablet computer and a bottle of oil, were thrown around in the cockpit. The commander banged his helmet into the door, damaging the helmet and causing the chin strap to come loose. The red light indicating that the emergency locator transmitter [a Kannad AP-H INTEGRA (ER)] had been triggered started flashing.  The commander’s right hand got trapped, but he quickly managed to free it. He then released his seatbelt and climbed out of the helicopter’s left side door. The engine continued to run for 19 seconds after the helicopter hit the ground.  Shortly after, the commander returned to the helicopter and switched off the electrical power and the emergency locator transmitter.

The pilot, who was wearing a helmet and restrained by a 4 point harness, sustained only minor abrasions and bruising.  The load overturned and came to rest 47 m from the helicopter after being released during the accident sequence.

The wreckage was examined at the NSIA’s Lillestrøm facility.  They noted:

There was no evidence of pre-impact defects.  They examined the pilot’s helmet: 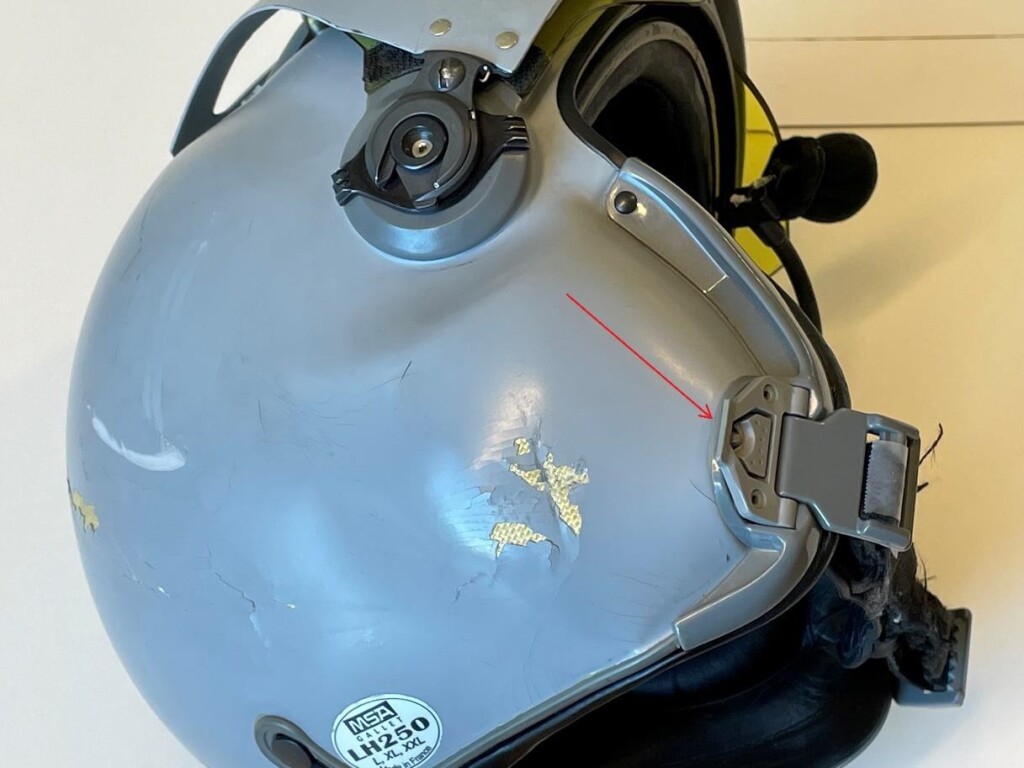 The helicopter and the right cockpit door were lying over a large rock and the commander may have hit this rock with his helmet.   NSIA believes that his use of a helmet prevented any further injury.

The NSIA commissioned a survey by a drone (or Unmanned Air System [UAS] / Remotely Piloted Air System [RPAS]), which was conducted shortly after the wreckage was removed. 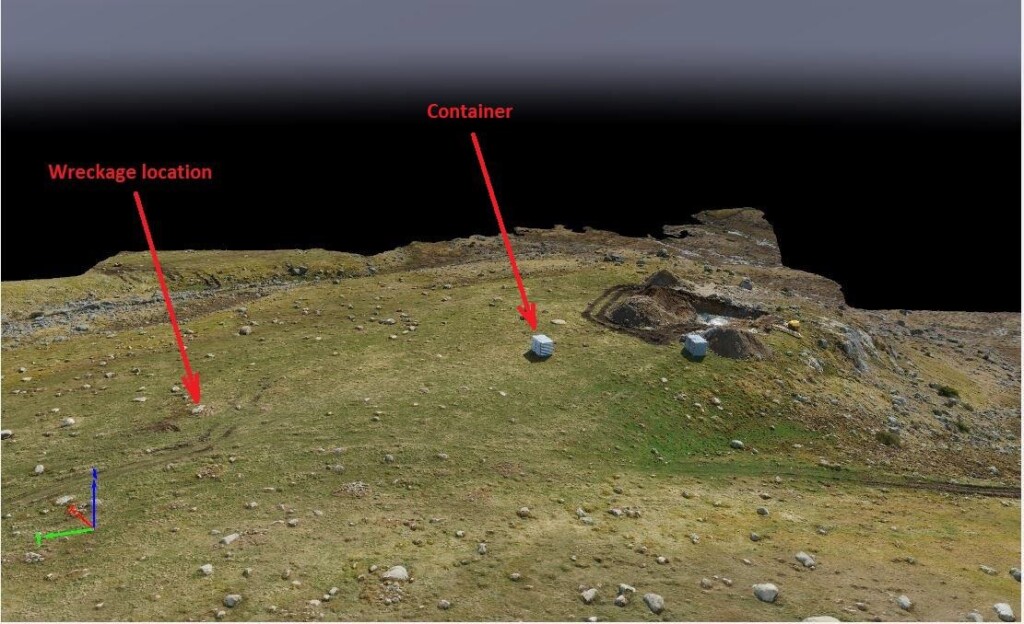 3D illustration of the accident site, looking southeast, the day after the wreckage was
removed. The arrow on the left points to the rock on which the helicopter was lying. The hole in
the ground is for pylon 155. A rocky outcrop and steeply sloping terrain can be seen on the far
right. (Credit Nordic Unmanned via NSIA) 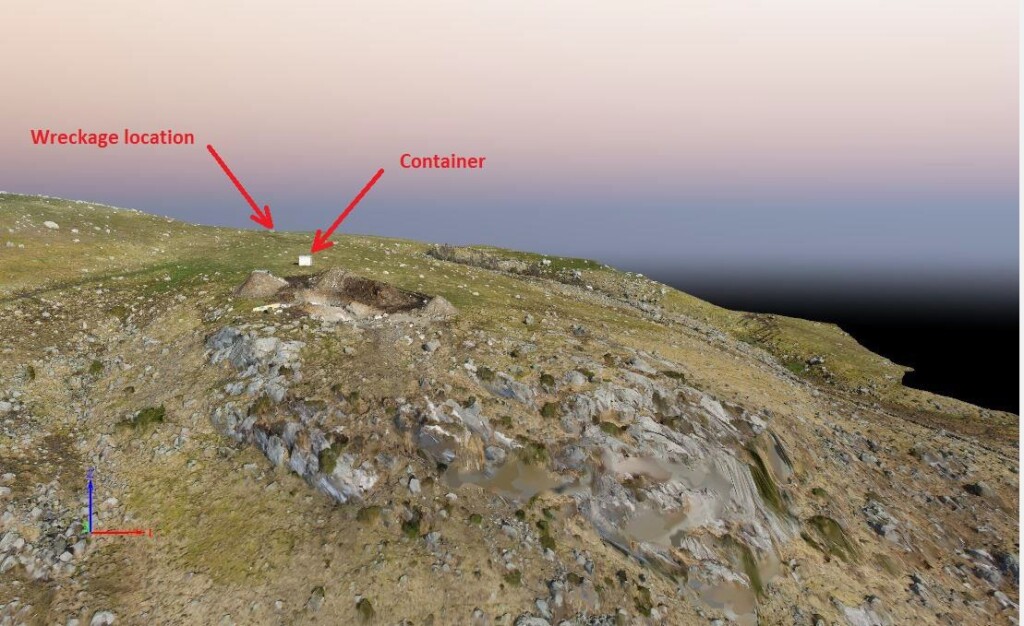 3D illustration of the accident site, looking northeast, the day after the helicopter was
removed. The hole in the ground is for pylon 155. (Credit: Nordic Unmanned via NSIA)

There are no exact data for the wind conditions that were applicable at the accident site. There were strong winds and gusts at the time the commander was to move the container from pylon 151 to rig area C32. Both the forecast and the reported wind direction was southerly or southwesterly.

This means that the wind probably flowed up the sloping terrain south of the accident site.  The NSIA note that the operator’s procedures for sling load operations (SOP 5.5.2 Limitations) state:

Under conditions of turbulent air, the speed is reduced further. Maximum wind is normally 30 kt, in mountain areas the maximum can be considered 15 to 20 kts. Wind conditions must always be considered by the commander on the spot.

The operation took place in an open mountain terrain where strong winds and local turbulence were to be expected.

Available weather forecasts and reports from Stavanger Airport Sola (TAF and METAR) show that a strong southerly to southwesterly wind with gusts up to 33–38 kt was expected. That exceeded the limit of 30 kt that Helitrans had originally set for sling load operations. The commander could therefore have refused to fly on the day in question, with reference to the limits set by the helicopter operator.

It is conceivable that the decision to move the container from pylon 151 to rig area C32 was the result of a self-imposed pressure to ‘clear up’ the misunderstanding that had occurred, and that the commander, at the very least, wanted to move the container to a rig area. The decision may also have been influenced by an overly optimistic assessment of the difficulties of flying in the prevailing winds.

The recorded video indicates there was a wind gust just as the sling came into tension.

The southerly wind could therefore move the helicopter backwards and to the left unless the commander used the cyclic stick to counteract the movement. 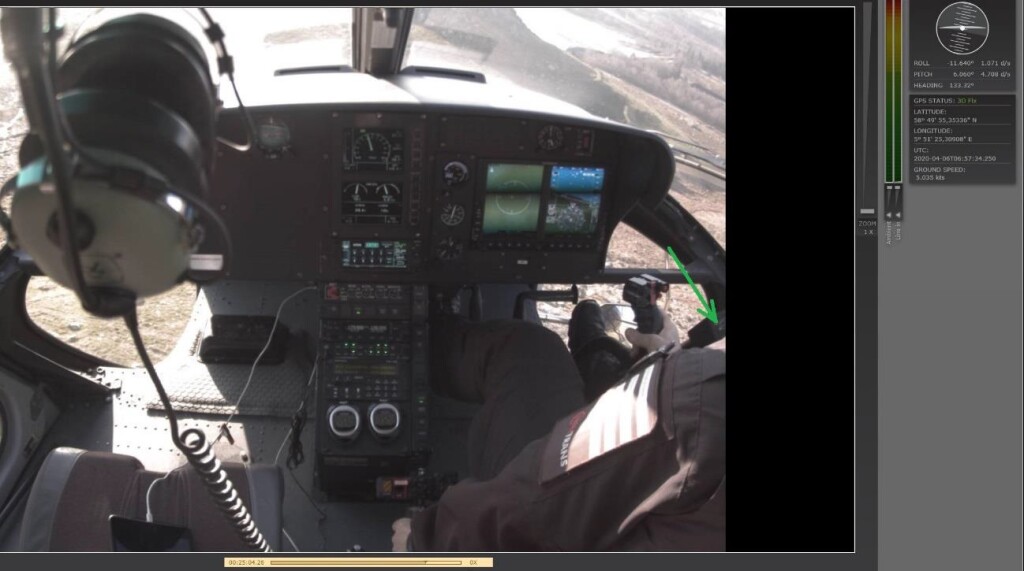 The helicopter has rolled left to an angle of 11.6 degrees and has a nose high angle of 6
degrees. The commander has moved the cyclic stick all the way to the right, and his right foot has
just slipped off the pedal. A single green light can be seen on the far right in the image, indicating
a load of less than 100 kg (green arrow). (Credit: NSIA)

The image [above] shows that the cyclic stick had been moved all the way to the right without this stopping the leftward roll.  The NSIA believes that, at that point, the helicopter had come in a dynamic rollover situation. In this case, the
container, which was still on the ground, acted as a fixed point via the longline.

A dynamic rollover normally occurs if a helicopter has one skid on the ground at the same time as it is affected by a lateral force or movement. As the helicopter starts to pivot, the main rotor thrust will contribute to further pivot the helicopter around the skid. When the critical rollover angle is exceeded, dynamic rollover cannot be prevented by corrective cyclic control alone, and the main rotor will hit the ground. Dynamic rollover is most likely to occur in sideways sloping terrain, but can also occur on a horizontal surface, for example if a skid gets caught in something in connection with take-off. 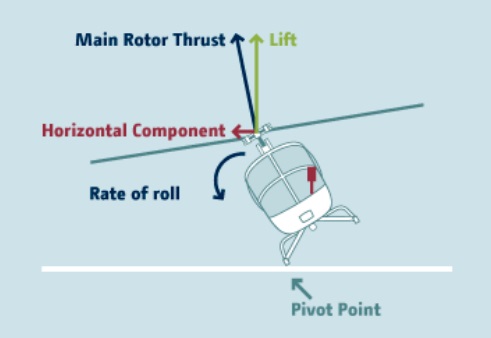 A form of dynamic rollover can also occur if a longline or underslung load gets caught in something on the ground while the helicopter is moving horizontally.

The situation rapidly deteriorated. The commander lost control of the helicopter in less than seven seconds. After that, the commander had no possibility of controlling the sequence of events even if he opened the cargo hook and released the longline.

The commander was to move a container in demanding wind conditions that could exceed the limit of 30 kt set by the helicopter operator.  When he nonetheless decided to move the container, the helicopter was affected by a wind gust at the worst possible time, causing it to crash as a result of dynamic rollover.

It is difficult to define absolute regulatory limits that can be used as the basis for deciding whether or not to fly in demanding wind conditions. In addition, the commander must consider local wind conditions and perform a risk assessment of the operation.