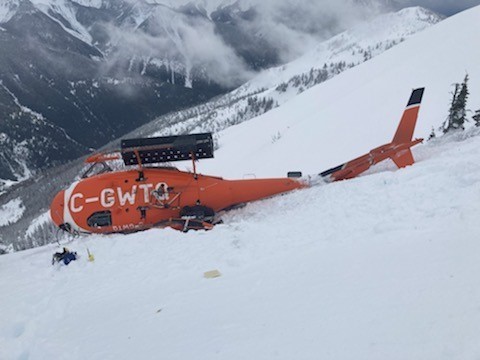 The Transportation Safety Board of Canada (TSB) explain in their safety investigation report, issued on 2 November 2022, that the helicopter was contracted by the British Columbia Ministry of Transportation and Infrastructure (MOTI), and onboard was the pilot (c11,000 flight hours, “mostly” on the AS350) and two ‘avalanche technicians’ (who both had c20 years experience in the role).

The BC MOTI’s Avalanche and Weather Programs unit has a published manual, Explosive Use Operational Plan, that specifies that the Ministry artificially triggers avalanches to reduce the threat of naturally triggered avalanches along provincial highways.

The team were making their second flight of the day to drop “strategically placed explosive charges (12.5 kg bags of ammonium nitrate and fuel oil [ANFO] compound) and igniters onto the slope from a height of approximately 20 feet”.

The crew were the same as on the first flight, but the avalanche technicians exchanged roles and positions.

The bombardier was seated on the right side of the rear bench… His role was to deploy charges out of the right-side pocket door. He coordinated the placement of the helicopter with the pilot to achieve the best effect from the explosive charge. The role of the blasting assistant, who occupied the left front seat, was to document the operation.

The helicopter operated approximately 100 feet below the London Ridge ridgeline, about 7000 feet above sea level (ASL).  The plan was to deploy 15 explosive charges.

The bombardier requested an adjustment to the initial target for the second explosive charge to be deployed, and the pilot climbed the helicopter up the slope, nearer to the ridge and close to the base of the clouds.

The pilot’s exit strategy would be to turn left and then fly downhill if necessary.

As the helicopter progressed along the mountainside near the upper treeline, the pilot positioned and stabilized it in a hover to allow the explosive charge to be deployed.

Just as the pilot lost reference with the ground and flight visibility was reduced, the bombardier deployed the second explosive charge. At this time, the main rotor downwash and prolonged hover over a layer of loose snow created whiteout conditions.

As anticipated the pilot turned the helicopter to the left.

During this manoeuvre the tail rotor contacted either a tree or the surface of the slope; this caused the helicopter to shudder. The high-frequency vibration rapidly worsened and the pilot performed a forced landing.

[T]he helicopter landed hard on its skids and tipped onto its right (the pilot’s) side [and] came to rest about 3 to 5 m downslope of the second explosive charge deployed.

The charge detonated approximately 2.5 minutes later, but did not trigger a release of the snowpack.

The occupants were disoriented and shaken, but uninjured.  The pilot and blasting assistant were able to extricate themselves from the wreckage.

The bombardier required some assistance to release his harness because his own knife was not easily accessible. He also experienced difficulty releasing his lap belt because the latch mechanism had been taped over.

This was a working practice to prevent a snag hazard opening the latch.  That is one reason why a rotary quick release buckle would be preferable.

With the assistance of the other crew members, he was released and egressed from the aircraft.

…because the helicopter was lying on its right side, the cargo door could not be opened and the crew could not access this equipment.

Fortuitously they were rescued about an hour later.

…before starting the approach to a blasting site, the crew must hold a briefing to discuss the suitability of the avalanche start zone, current weather conditions, and the adequacy of visual reference for approach, deployment of the charge, and departure from the blasting site.

If, during the approach phase, a new site is selected, the approach is discontinued. A thorough assessment of the new location is subsequently conducted and briefed, and a new approach is initiated.

Additionally, BC MOTI completed an internal investigation of its avalanche control operations.  This examined “several aspects of the operations” and made findings and recommendations on:

The deterioration of weather conditions or whiteout generated by the helicopter during flight can lead to disorientation and controlled flight into terrain. Pilots must continuously exercise vigilance to reduce and mitigate the risks associated with changing weather, especially in the mountains.

In an otherwise survivable accident, egress from the aircraft wreckage can be complicated by disorientation and the need to release restraint systems. Aircraft occupants are reminded to use restraint systems as intended so that they can be easily released when required.

Following egress, ready access to alerting equipment can facilitate the prompt rescue of the occupants.