On 28 June 2021, Yellowhead Helicopters Bell 212 C-GYHQ was destroyed when it broke up in-flight while supporting fire fighting operations near Evansburg, Alberta.  The pilot, the sole occupant was killed. 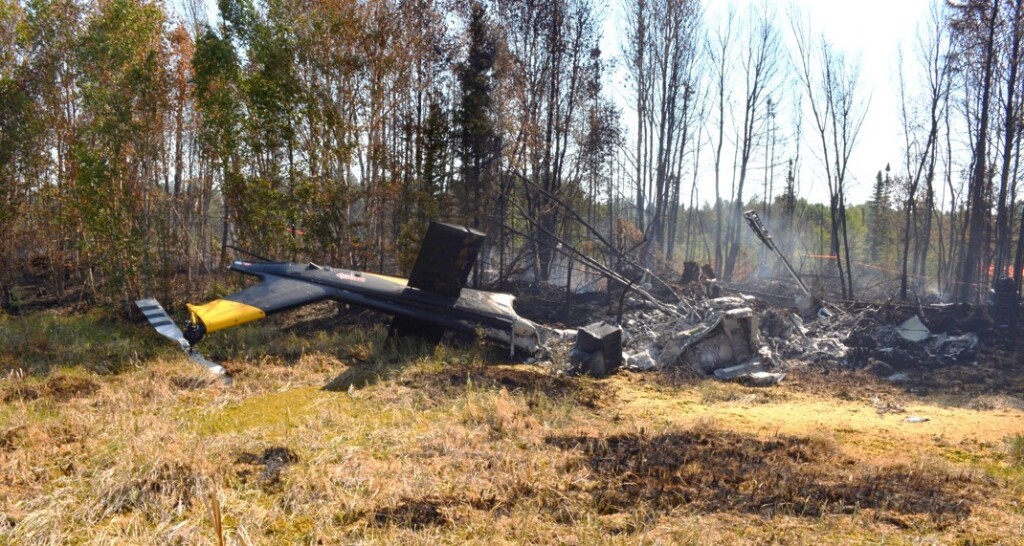 The Transportation Safety Board of Canada (TSB) explain in their safety investigation report, issued 7 September 2022, that…

Investigators observed that the main rotor hub strap retaining pin of blade A had failed. 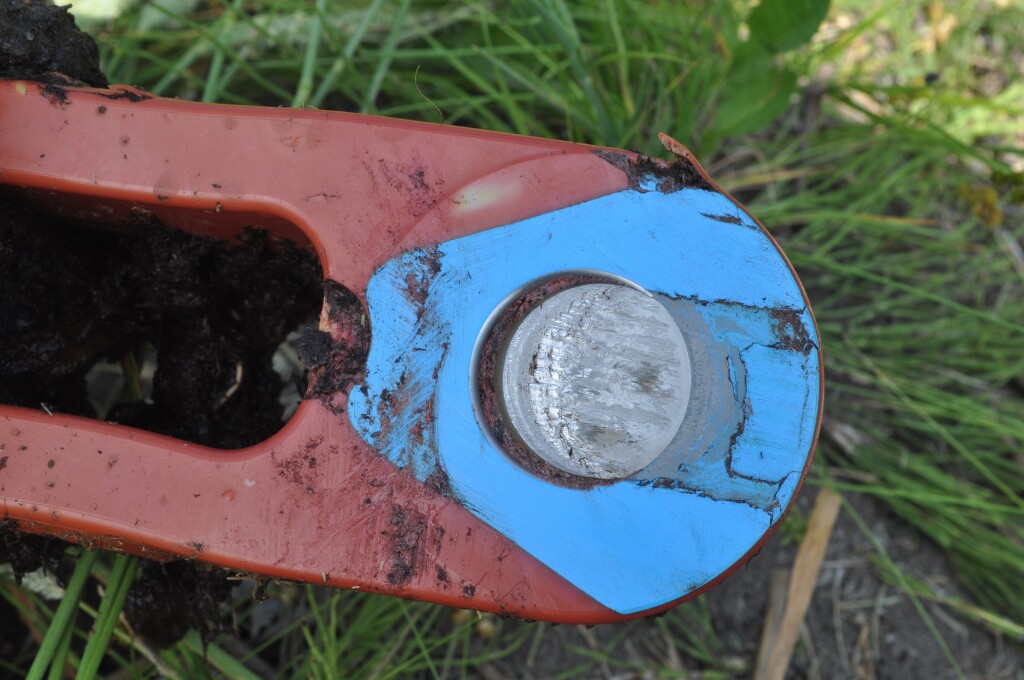 …both main rotor hub straps and the associated retaining pins had been replaced with new parts acquired from Bell. This work was completed to comply with the requirement to replace the parts after 1200 flight hours or 24 months. 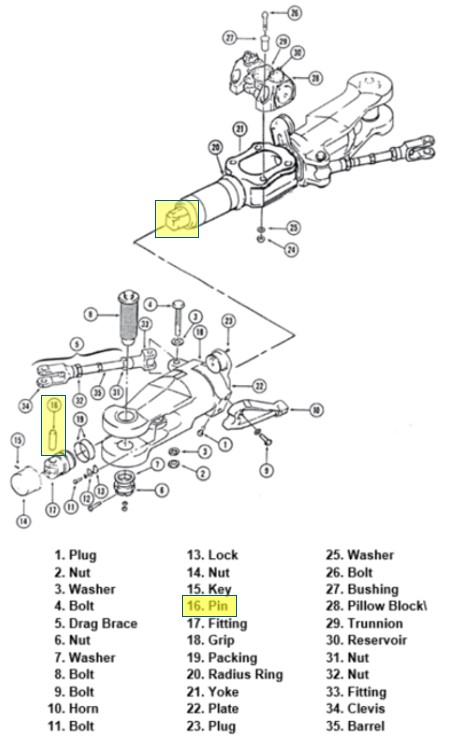 On 22 June 2021, a local post-maintenance test flight was conducted. No defects were noted. Between 22 and 27 June 2021, the occurrence helicopter accrued 18.9 flight hours.

The main rotor hub strap retaining pins had accrued approximately 21.4 hours time in service at the time of the occurrence.

The investigators go on to explain that significantly: 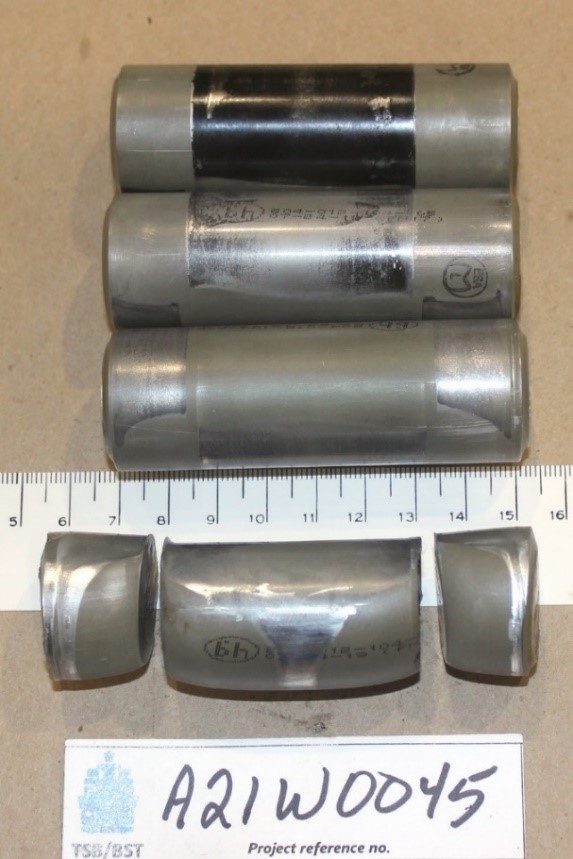 All 4 retaining pins installed on the occurrence helicopter were manufactured by Fore Machine Company (FMC).

As FMC held no FAA approval, nor was it required to be.  The manufacture of the pins at FMC was subject to a first article inspection process, conducted for Bell by a third-party using personnel trained and approved by Bell, before ultimately being released by bell..

Bell conducts oversight of its suppliers and audited FMC at their Haltom City, Texas facility in Forth Worth in 2016, 2017, and 2019.

Bell’s last audit of FMC before the occurrence pins were manufactured (in 2018) was completed on 17 August 2017 and covered Appendix I: Special Requirements for Offload of Bell Planning Operations, and Appendix VI: “Controlled Item Program” Supplier Requirements of Bell’s Supplier Quality Requirements Manual. This audit resulted in 2 findings, one related to FMC’s documentation control procedures, and the other related to measurement section analysis.

…on an average of 1 to 3 times a month for various reasons, including completing source inspections, reviewing non-conformances…and verifying, validating, and rectifying defects.

During site visits, Bell personnel would regularly walk through the stores area to ensure that the area was orderly and that raw material was correctly identified and tagged. These oversight activities and site visits did not result in any significant observations or recommendations…

The FAA audits Bell’s vendor audits and supplier oversight. The last FAA audit of Bell/FMC, was conducted on 1 May 2018.

…determined that, when the occurrence pins were manufactured in the fall of 2018, FMC stored the raw material in its stores area by material diameter, not by type or composition. This meant, for example, that all rods that were 1 inch in diameter were stored together, regardless of the material they were made of (aluminum, carbon steel, stainless steel, brass, etc.).

As a result, the onus was on the individual selecting the material for the job at hand to ensure that it was of the correct composition and specification.

Furthermore, TSB report that during times of high workload FMC’s quality control department used “helpers” from the production shopfloor to assist the quality control inspector in doing tasks such as hardness inspections.  This practice had not been observed by Bell and was not documented in production paperwork (which was signed by the QC Inspector even when a helper did the task), or in FMC’s procedures.

The machine used for the hardness testing was a semi-automatic model. This style of hardness testing machine relies on the operator’s ability to accurately complete all the steps required, in the correct sequence, in order to produce an accurate reading.

The view point of the senior [FMC] quality management…was that the hardness testing procedure was a repetitive and mundane job that could be successfully completed by a helper with a minimal amount of training, allowing a quality control inspector to complete dimensional checks of the lot of pins, which was considered a task requiring more experience and training.

On 2 October 2018, the stores department at FMC released the 8 rods of H11 tool steel to the production floor to begin the manufacturing process…[which]…would have yielded only approximately 320 pins.

TSB explain that extra material would be sought via production supervisors in the event that the quantity issued was not sufficient.  Ultimately material for 343 pins was processed.  An outsourced heat treatment provider, Bodycote, identified discrepancies in hardness within the batch.

On 17 December 2018, production personnel from Bodycote contacted the FMC quality manager via e-mail to inform them of the discrepancy.

FMC’s quality manager determined the hardness of all parts in the lot should be checked.

Several e-mail communication exchanges took place on 17 and 18 December 2018 regarding how to proceed with addressing the hardness issue.

The [TSB] investigation was unable to determine if a final solution was found. However, while several additional personnel at FMC were included on the e-mail—either as direct recipients or additional recipients (i.e., in cc)—including the individual that signed for receiving the parts back at FMC, the quality control inspector who performed the receiving inspection when the parts were returned from the heat treatment provider was not.

Bodycote performed hardness testing on all pins in the lot and marked the non-conforming pins with a short yellow line down the pin.

The 44 pins that failed were returned in a separate box to those that passed., however at this stage the pins were not serialised so the paperwork could not specifically identify pins by serial number.  However, FMC personnel them processed all the pins.  Later, 199 were rejected for cadmium playing defects, leaving 142 pins.  Another was rejected at a later stage.

Also on 24 July 2019, an FMC employee completed the first article inspection on a representative sample of the batch of 141 pins. No deficiencies were noted and the pin passed the inspection.

On 29 July 2019, quality control personnel rejected 10 pins leaving 131 acceptable pin assemblies and, on 30 July 2019, a final inspection was completed on the pins.

Of those 44 pieces, 32 were rejected during the manufacturing quality control process for non-conformances unrelated to raw material selection.

The remaining 12 were shipped to Bell as part of the lot of 131 pins. 1 was the pin involved in this occurrence.

When they reviewed the production route card for the 204-012-104-003  pins, TSB identified four stages where the incorrect material could have been identified: 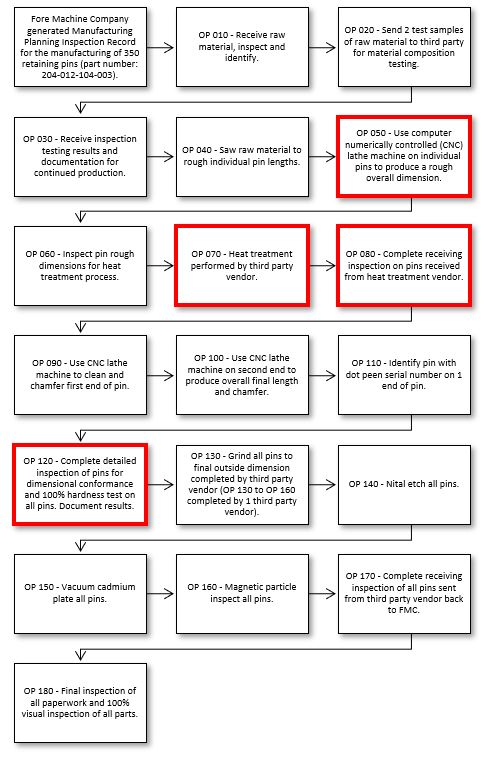 The -003 pins were then converted to -005 by the following process: 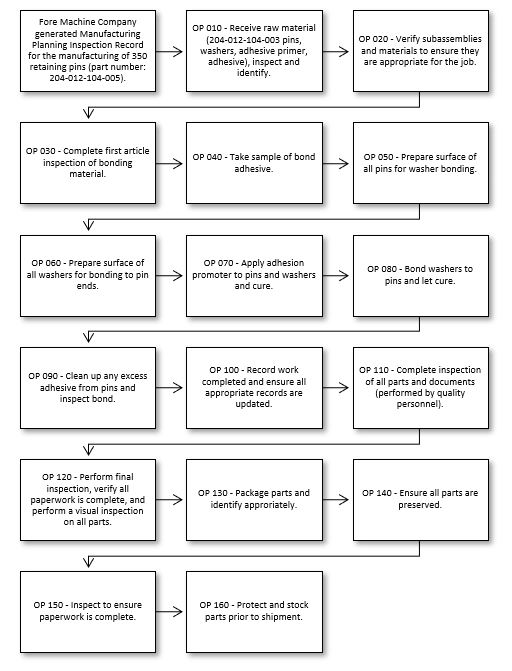 When received by the operator:

The physical appearance of each pin was essentially identical, and the weight difference between the 2 of them was approximately 13 grams, a discrepancy of 3.2%.

Hence, when accompanied by the correct release paperwork, there was not reason to suspect the parts were defective.

TSB report that on 5 July 2021, Bell issued 4 alert service bulletins for the B204B, B205, B205B and B212. These required the review of technical record to determine if retaining pins with serial number prefix FNFS were installed. If fitted, they were to be replaced before further flight.  Transport Canada issued an Emergency AD that day, the FAA the following day.

No systemic actions to improve production quality oversight were reported by TSB.

On 19 November 2021, less than 5 months after the accident, FMC ceased operations.