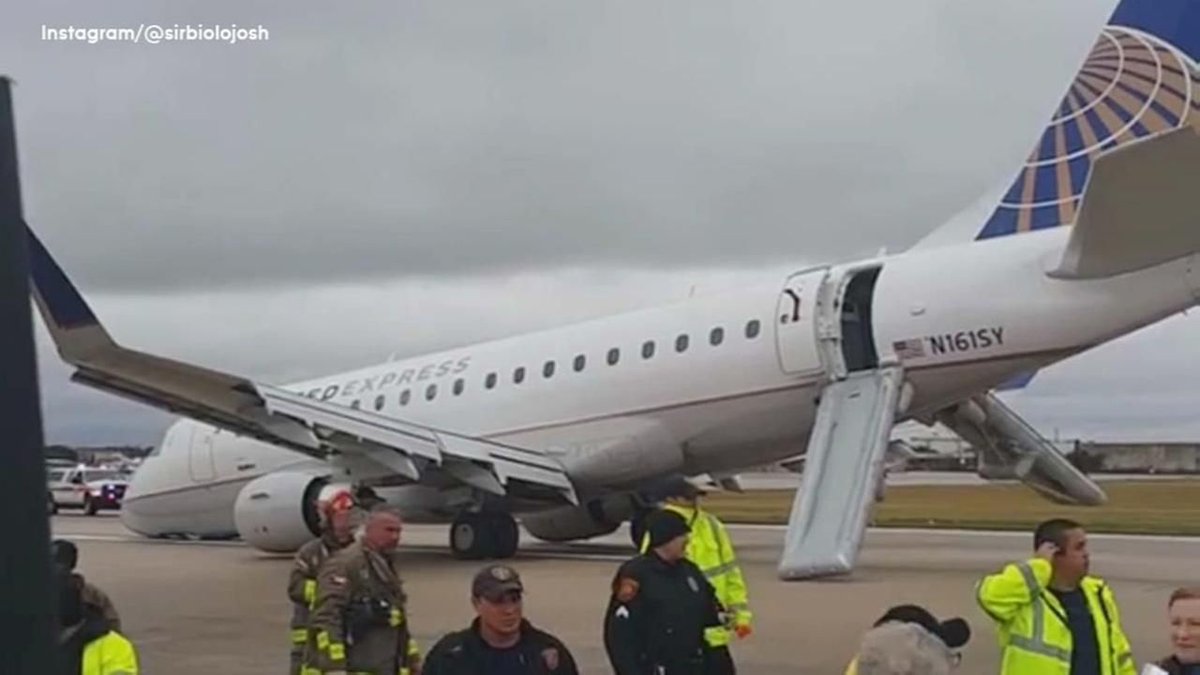 …after departure from the George Bush Intercontinental Airport (KIAH), Houston, Texas the crew heard a loud “thud/pop” just aft of the flight deck. Because no warnings or indications were displayed on the flight deck, the crew decided to proceed to [their destination, Monterrey (MMTY) Mexico]. When the landing gear was extended on approach, the crew received warning indications regarding the landing gear position and a “LDG GEAR LEVER DISAGREE” message. The crew declared a missed approach, retracted the landing gear per the quick reference handbook (QRH) procedures, and elected to divert to KSAT. Upon entering US airspace, the crew declared an emergency and performed a flyby of the control tower to verify landing gear position. The tower confirmed that the gear appeared to be in the down position. After touchdown on runway 4, during the landing rollout the nose gear retracted, without command, as the aircraft slowed to a stop. The crew and passengers evacuated the aircraft from the aft cabin doors via the evacuation slides. One minor [evacuation] injury was reported by a passenger….  The airplane sustained minor damage. 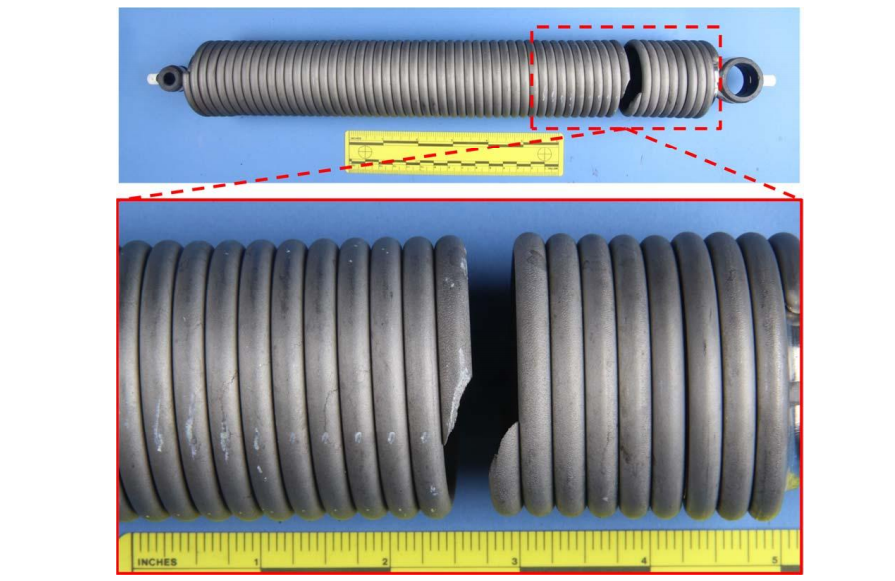 The NLG downlock spring separated in the ninth coil from the lower end due to progressive crack formation. No evidence of overstress was observed. During a visual inspection, external surfaces of the downlock spring wire had small openings, which resulted in surface roughness measurements that were above the allowable limit set by Embraer. 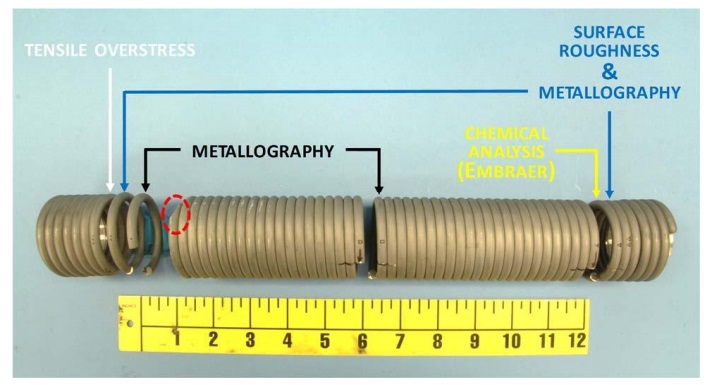 Macro photo showing how the spring was sectioned and which coils were used
for each type of testing performed. (Credit: NTSB)

Cross-sections prepared through multiple downlock spring coils along the length of the spring showed intergranular cracking at the openings. The openings and cracking were associated with white etching microstructure of the wire that was consistent with retained austenite, while the base material of the coils had microstructure consistent with martensite, as specified. The amount of retained austenite in a circumferential surface layer of the downlock spring coils was above the allowable limit specified by Embraer per AMS 5678. 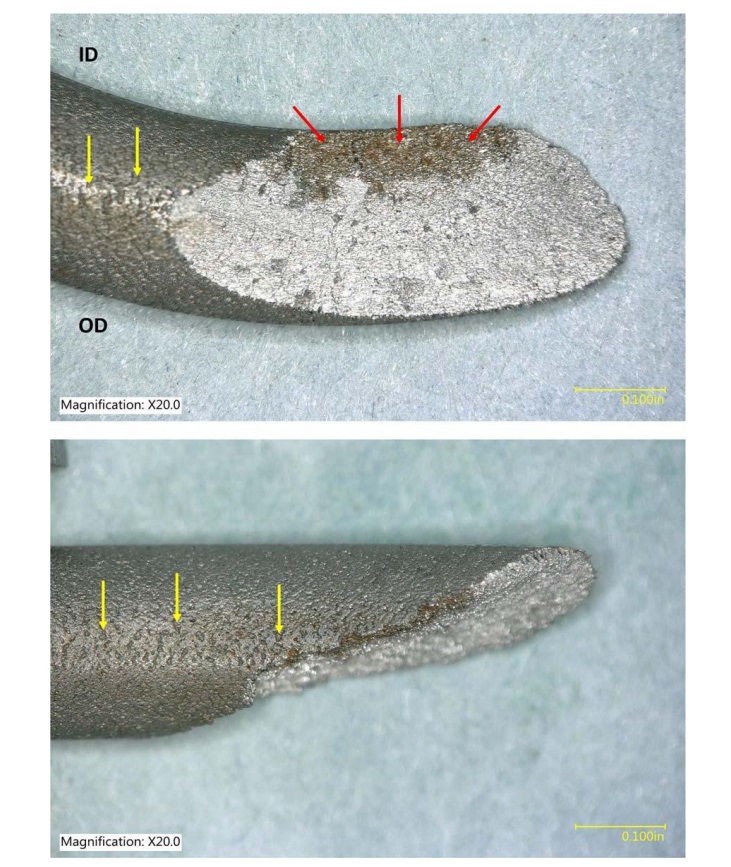 Two spring pieces (an end segment and a ring segment) were documented using radiographic images. The computed tomography (CT) slice images were examined, processed, and analyzed by the NTSB to evaluate the components. The results of the CT imaging were inconclusive in locating crack location in the spring segments. The manufacturer provided information to the NTSB regarding additional NLG and MLG downlock springs that failed during operations. The spring from this incident was the only one which resulted in an uncommanded gear retraction on landing. Manufacturing records for the incident spring were reviewed and compared with other events. The manufacturer identified a suspect batch of raw material for the springs, common to multiple events and springs with higher than allowable amounts of retained austenite. The aircraft manufacturer performed multiple quality audits throughout the supply chain for the spring manufacturing process and shared the results with the investigative team.

The letter addressed an inspection and possible replacement of the NLG downlock springs manufactured from certain material batches. 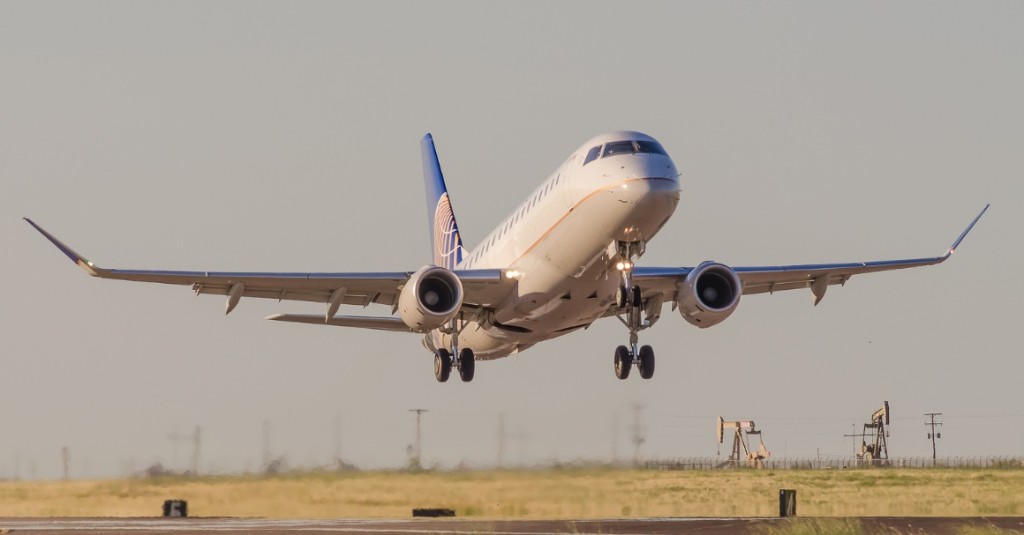