We often think of FOD, Foreign Object Damage, as something caused by a carelessly discarded piece of waste or forgotten nut or bolt.  The recently issued US National Transportation Safety Board (NTSB) report on a Cessna 208B Grand Caravan accident in Hawaii however describes a ‘micro FOD’ accident from 160 to 195 µm particles that got within an engine during off-wing maintenance.

As N861MA, operated by Mokulele Airlines, climbed through 8,000ft over open ocean water on 21 October 2013 with 2 crew and 8 passengers, there was a loud bang and a grinding sound.  This was followed by a loss of engine power and sparks from the engine’s right exhaust. The crew initiated a turn back towards Kahului Airport, which was about 13 miles north. The crew performed the emergency checklists and elected to make an emergency landing on Maui’s State Route 31. The aircraft suffered substantial damage to the right wing when it hit two road signs during the emergency landing. 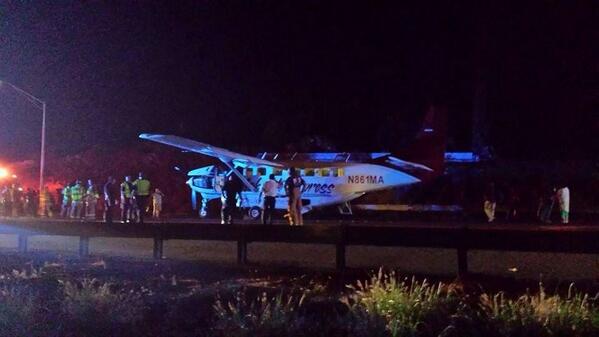 … all of the compressor turbine (CT) blades [of the single Pratt & Whitney Canada PT6-114A turboprop engine] had separated near the blade platforms, and the remaining stubs were gouged and battered. The fracture surface of one of the blades displayed smooth features characteristic of fatigue fracture; all other blade fracture surfaces displayed course features characteristic of overload fracture. 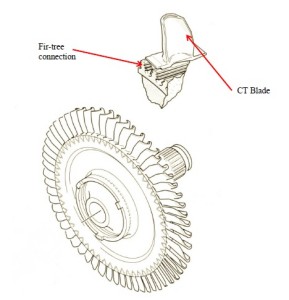 The CT hub displayed a frosted appearance over the entire front and aft surfaces, and glass beads and bead fragments were observed between the fir-tree joints of the blade platforms and the CT disc, consistent with the disc assembly having been cleaned by aggressive glass media blasting in the assembled condition. 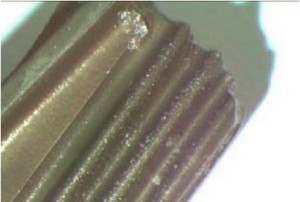 A dimensional and chemical analysis of a sample of the glass-like beads was accomplished by the manufacturer’s materials laboratory. The beads were revealed to be approximately 195 to 160 µm in size and were composed predominantly of silica with small quantities of sodium, calcium, magnesium and sulfur, which were consistent with the chemical components of glass.

The engine manufacturer specifies that all media blast cleaning be performed with the CT disc and blades disassembled. The glass bead contamination of the fir-tree joints caused the CT blades to be unevenly restrained, and it altered the blades’ designed vibration frequency, making them susceptible to the aerodynamic vibrations from the combustor gas flow. Therefore, the fatigue fracture of the blade was most likely due to the glass bead contamination.

The CT disc assembly had been removed from the engine for repair about two months before the accident, and this was likely when the glass bead media cleaning occurred and the beads became embedded in the exposed fir tree joints.

When the CT disc assembly is installed in the engine, the fir tree joints are protected from exposure; therefore, the glass bead contamination could not have occurred when the engine was installed on the airplane.

More detail can be found in the NTSB Powerplant Group factual report.

Improper maintenance that resulted in contamination of the engine’s compressor turbine disc and blade assembly by glass bead remnants, which resulted in a blade failure.

We have previously written about Foreign Object Debris (FOD) Damages 737 Flying Controls, where a cleaning cloth got trapped on-board a New Zealand aircraft.

This Opinion proposes to introduce a new Subpart L into Annex V (Part-SPA) to Regulation (EU) No 965/2012, containing specific requirements associated with a specific approval for CAT SET-IMC operations in the area of aeroplane equipment, flight planning, flight procedures and crew training. In addition, it introduces consequential amendments to the Cover Regulation, as well as in Annex II (Part-ARO), Annex III (Part-ORO), and Annex IV (Part-CAT) as CAT SET-IMC operations were previously forbidden.

The proposed changes are expected to maintain the safety of CAT operations by allowing, based on proportionate requirements, the operations in IMC and/or at night of single-engined turbine aeroplanes better equipped and with a higher engine reliability than some currently operated twins.

Aerossurance has extensive air safety, engine design and maintenance, airworthiness and accident analysis experience.  For practical aviation advice you can trust, contact us at: enquiries@aerossurance.com