Maintenance Human Factors: The Next Generation

On 12 May 2015 at Cranfield University, the Royal Aeronautical Society (RAeS) discussed Human Factors in Engineering – the Next Generation.

Aerossurance is pleased to have sponsored this thought provoking RAeS Human Factors Group: Engineering event. While the seminar was intended to connect the new generation of aerospace professionals and experienced HF practitioners, it posed a deeper question:

Do we need a new generation approach to maintenance human factors too?

In his opening address Cranfield University’s Professor Dave King (a former Chief Inspector of Air Accidents with the UK Air Accidents Investigation Branch [AAIB]) talked about a generation of attention on maintenance HF incidents since the infamous BAC-111 window failure in 1990. This was by no means the first accident investigation were maintenance HF issues were examined.  However, that accident (and a structural failure to a Boeing 737-200 in Hawaii in 1988) mark the beginning of a period were the human factors aspects of a number of high profile maintenance related accidents and serious incidents were examined in detail.

These investigations went beyond the outdated idea that ‘error is a cause’ to a more searching examination of the circumstances why error was a consequence. Professor King however made the point that a generation on, similar occurrences were still repeating.

Consequently he highlighted that as well as thinking about the next generation in the industry we also need to think about a next generation approach to human factors in engineering. For example, the UK Civil Aviation Authority (CAA) has commented that:

Human Factors training alone is not considered sufficient to minimise maintenance error. Most of the [contributing factors] can be attributed to the safety culture and associated behaviours of the organisation.

The RAeS Human Factors Group: Engineering also discussed preliminary results from an online survey.  The feedback to date suggested a need to:

At the time of writing this short survey is still currently open so you can still have your say. The following case study considers Professor King’s question, using some material presented in other sessions of the seminar.

In one presentation during the seminar, Easyjet talked about an incident when an engine fan cowling was lost from an Airbus A320 departing from Milan in August 2003 and their response.  UPDATE 11 December 2016: ANSV Report on EasyJet A320 Cowling Loss: Maintenance Human Factors 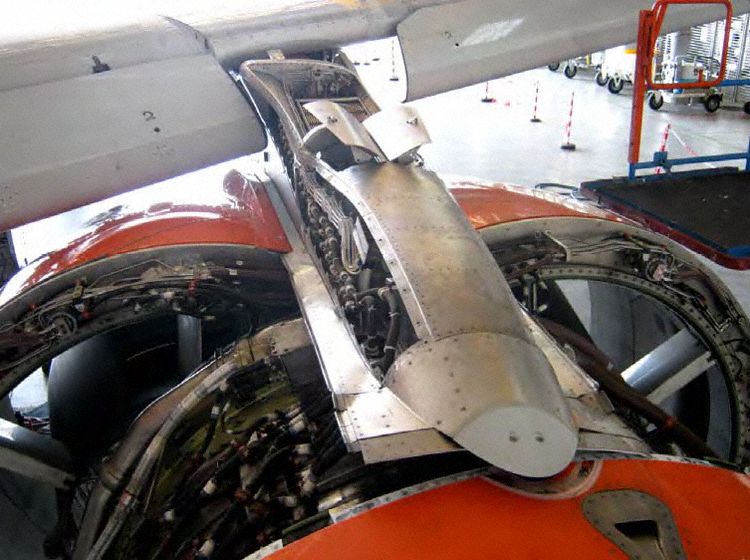 In fact just three months prior to the Easyjet occurrence, a British Airways A319 suffered a double cowling loss at London Heathrow.  AAIB had previously reported on an occurrence in 2000 (at that time the 8th on the A320 family) and made a number of recommendations.  A week after the BA event AAIB issued a further recommendation in a Special Bulletin:

Safety Recommendation 2013-011: It is recommended that Airbus formally notifies operators of A320-family aircraft of the fan cowl door loss event on A319 G-EUOE on 24 May 2013, and reiterates the importance of verifying that the fan cowl doors are latched prior to flight by visually checking the position of the latches.

The final report on the Heathrow occurrence is expected to be published shortly.  UPDATE: This was issued on 14 July 2015 and we issued our own summary on the same day, mainly focused on maintenance HF matters.

Part of the reason for the number of occurrences on the A320 family is that the cowlings can hang in a position visually identical to the locked position and the latches, which normally need to be activated while lying on the ground due to the low ground clearance, are difficult to see. Previous modifications (adding warning decals and painting the edges of the cowlings in contrasting colours) had only a limited effect as they did not make the actual task easier or error-proof. Training, enhancing procedures (for example recording when cowlings are opened) and reminding people of procedures also had only a minimal effect on risk.  This is because:

In another presentation, the UK CAA commented that too often we apply MORE training and MORE procedures when we should be looking at their EFFECTIVENESS. The history of cowling losses indicates that procedures were not an effective control for this hazard.  The series of losses also suggests this conclusion was apparent some time ago (for example after the AAIB report on at incident to G-VCED in 2000) and this was not a hazard where eliciting more near miss or hazard reports was necessary to supplement the data on actual cowling losses. A far better control is to design out the potential for error.

In 2012 the European Aviation Safety Agency (EASA) proposed a Special Condition for certification of new aircraft to address this hazard.  They comment:

It cannot be expected a design can cope with any maintenance abuse; however, it shall minimise the risk associated with the normal maintenance practices in the current airline environment.

It is now anticipated that a new locking modification will be available for retro-fit to the A320 family later this year that uses a large key (marked with a flag and with a specific cockpit stowage location) that can only be removed when a cowling is actually in lock.  The A320neo will feature a cockpit locking indication also. Easyjet talked about the value of encouraging design / maintenance collaboration in what will hopefully eliminate cowling closure errors.  Clearly it is preferable for that collaboration to identify tasks that are at risk of human error early in the design process, as the cost of design changes increases dramatically as a product progresses through its lifecycle, from concept into service.  Other modifications, such as adding smaller access panels to allow some tasks to be done without opening the cowlings, are also worthy of consideration to reduce exposure to cowling unlatching.

During one of 8 workshops held during the seminar Dr David Embrey of Human Reliability Associates demonstrated the SHERPA (Systematic Human Error Reduction & Prediction Analysis) technique and associated software.  Widely used in an number of industries, SHERPA has been previously used on projects on fast jet and helicopter maintenance as well as in flight deck design analysis.  In the demonstration, task cards for a critical flying control maintenance task were deconstructed and a number of opportunities for improvement became rapidly apparent.  If used during the design process, such techniques can highlighting high risk tasks that justify design improvements and result in more risk-aware technical publications.  However it would also have great value within CAMOs and maintenance organisations.

Do we need a next generation approach?  Probably, but we certainly do need to apply the full range of tools, techniques and processes that are available in a balanced way.  Reliance on ‘easy’ traditional actions (e.g. warning decals, extra procedures, safety notices and repetitive PowerPoint based classroom training) is not enough.  Failing to learn from incidents that have happened to others while waiting for you own people to make errors are not good enough either.  Equally learning of the misfortune of others is not the same as learning from it AND putting improvements in place.

During the conference, the John Saul Executive Director of the International Federation of Airworthiness (IFA) presented Professor Dave King with the IFA’s Whittle Safety Award for his work on human performance associated with accidents and furthering actions to reduce human errors.

Presentations from the RAeS seminar are available here.

Aerossurance has previously written about a number of engineering HF issues:

UPDATE 2 March 2018: An excellent initiative to create more Human Centred Design by use of a Human Hazard Analysis is described in Designing out human error

Aerossurance is also pleased to be supporting for the second year the Chartered Institute of Ergonomics & Human Factors‘ Human Factors in Aviation Safety conference at East Midlands Airport 7-8 November 2016.

We will be presenting our views on the future on maintenance human factors.

Aerossurance is delighted to be sponsoring an RAeS HFG:E conference at Cranfield University on 9 May 2017, on the topic of Staying Alert: Managing Fatigue in Maintenance.

For expert support on design, maintenance human factors, risk assessment, safety culture development and SMS that you can trust, contact Aerossurance at: enquiries@aerossurance.com