Sikorsky S-76C+ helicopter PK-FUP (MSN 760582), operated by Hevilift Aviation Indonesia, crashed on 21 March 2015. The final report of Indonesian safety investigators confirms that control was lost after a main rotor servo push rod connection failed after a loss of torque and progressive wear to the point of separation from the rod end. 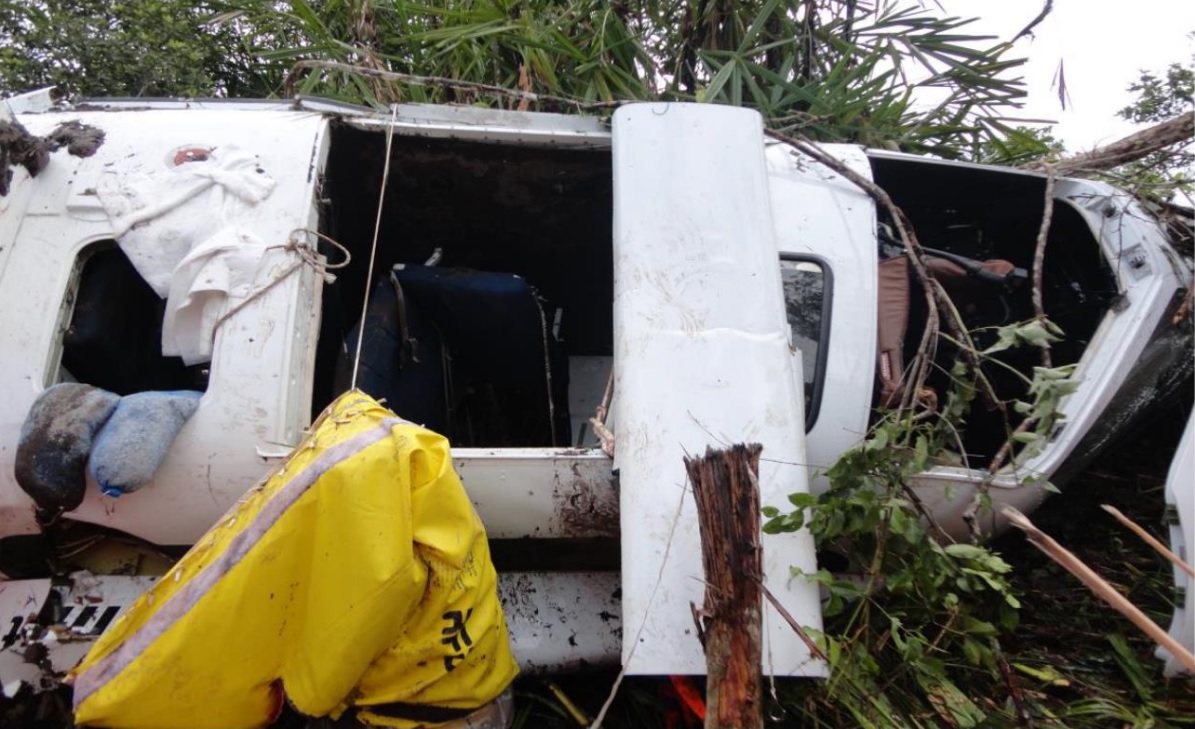 PK-FUP was conducting a daylight pipeline inspection for Total E&P Indonesia from Sepinggan Airport, via the Handil helipad, with eight occupants (two pilots, one engineer, one flight operation officer and four passengers). The Indonesian Komite Nasional Keselamatan Transportasi (KNKT) state in their safety investigation report  that:

After reached the cruising altitude of 1,000 feet the PIC [Pilot in Command] handed over the control to the SIC [Second in Command]. The SIC engaged the autopilot and flew maintain cruise altitude and speed of 95 knot. The weather was clear, wind condition was westerly at speed of 5 knots and visibility approximately 8 km. At position approximately 8 nm from CPU [Central Processing Unit facility] the PIC asked the SIC to descend to 600 feet with the rate of 200 feet/minute. While passing 800 feet the helicopter attitude became un-commanded [sic]. The helicopter rolled to the left and pitch up then rolled to the right and pitch down. The SIC lowered the collective and reduced the helicopter speed with intention to recover the helicopter attitude with no success. The PIC took over the control to recover the helicopter until [it]..crash[ed] into swamp.

The wreckage came to rest inverted in a tree just over 30 seconds after the first un-commanded movement.  All eight occupants survived, one with serious injuries and the others miraculously with no or only minor injuries.

….showed that the helicopter attitude was stable when reaching the altitude of 1,000 feet with heading of 038 degrees. Five minutes later, during descent, the helicopter entered [an] un-commanded attitude. A second after the helicopter started to bank to the left, there was pilot input recorded in the MPFR to counter the aircraft attitude however, the flight control did not respond as expected. The helicopter entered the un-commanded attitude for 31 seconds before ground impact. The MPFR recorded the roll to the left up to 77 degrees, roll to the right up to 52 degrees, pitch up to 45 degrees and pitch down up to 61 degrees. 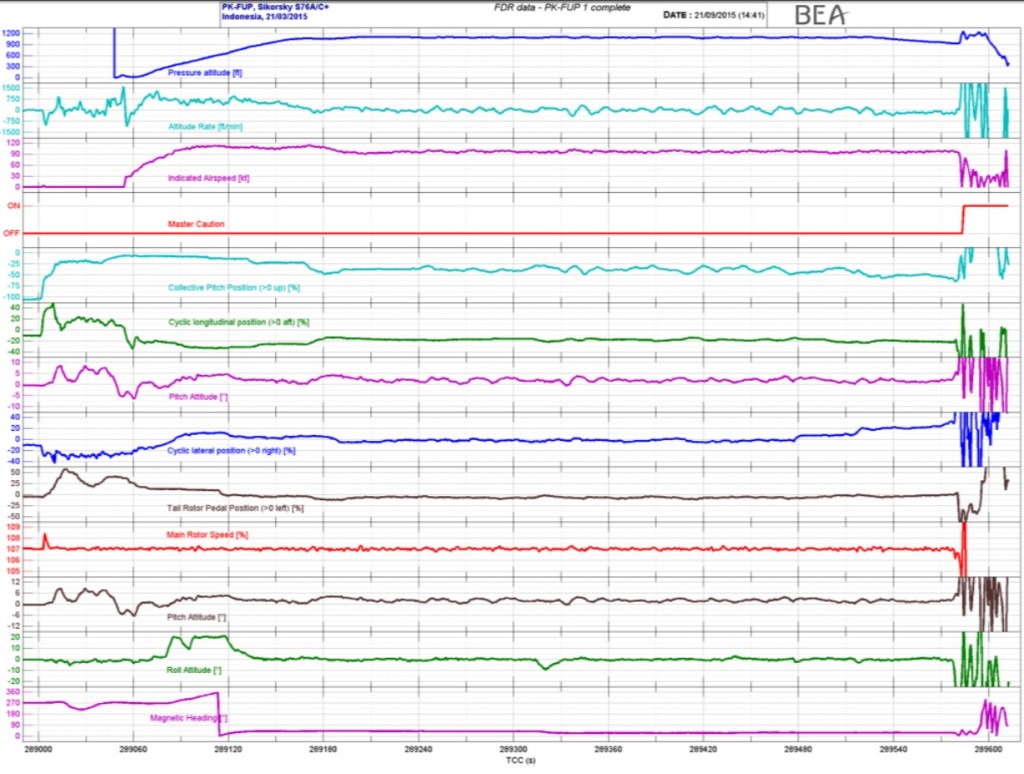 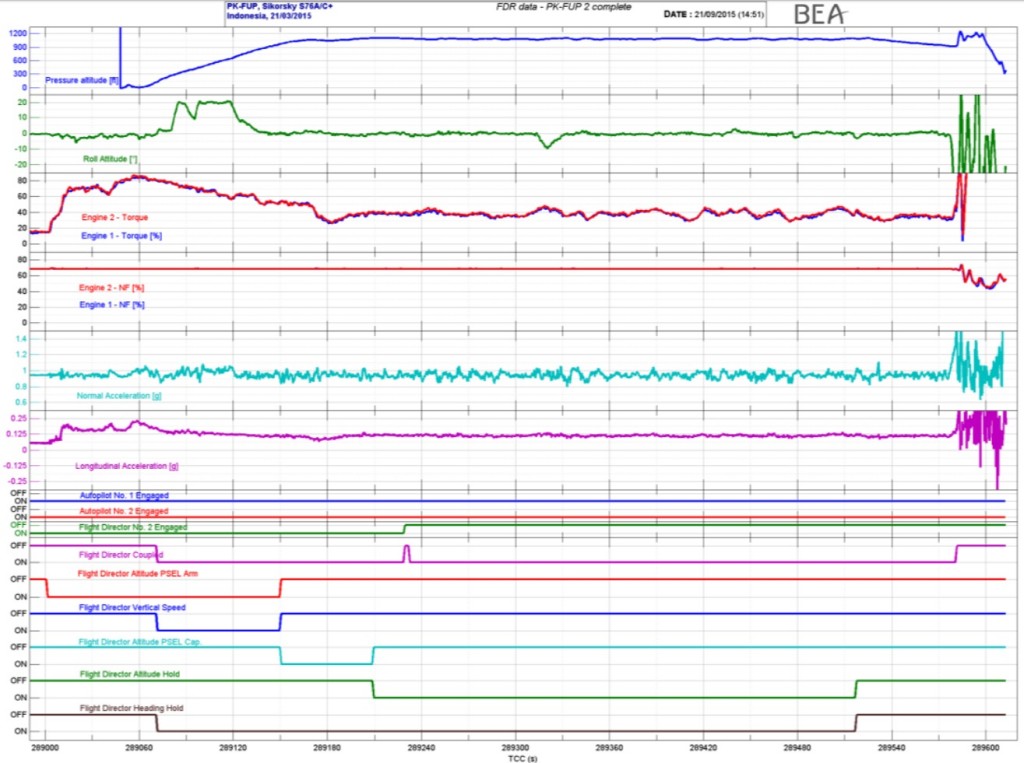 During the un-commanded attitude [sic], unusual sound[s were] recorded [on] video media [a passenger was using a video camera as part of the pipeline survey] and MPFR. The sound spectrum analysis concluded that there was no evidence or progressive damage of propulsion system except there was NR instability observed during the last 35 seconds of the flight.

Examination of the wreckage:

Examination of the flying controls however showed that the rod end of forward main rotor servo push rod had separated.

The S-76C has three servos, each receiving inputs to a vertical push-pull rod via a bellcrank.

The rod end bearing connects “to the push rod via threaded shank and locked by mean of jam nut” (highlighted in red in the above illustration).  The design does not use a locking device “to secure the jam nut to prevent loosening from the push rod during the operation” explain the KNKT. A torque stripe had been applied on installation. 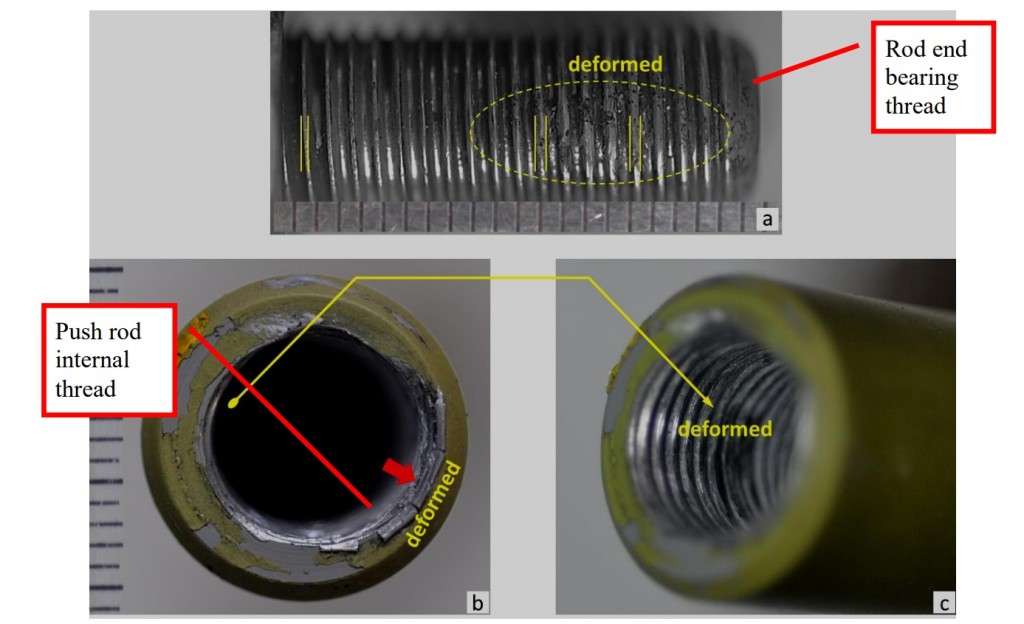 Upon sectioning the push rod “most of the threads” were found “missing in the worn area” and “asymmetric deformation was also observed on the edge of push rod internal thread”. 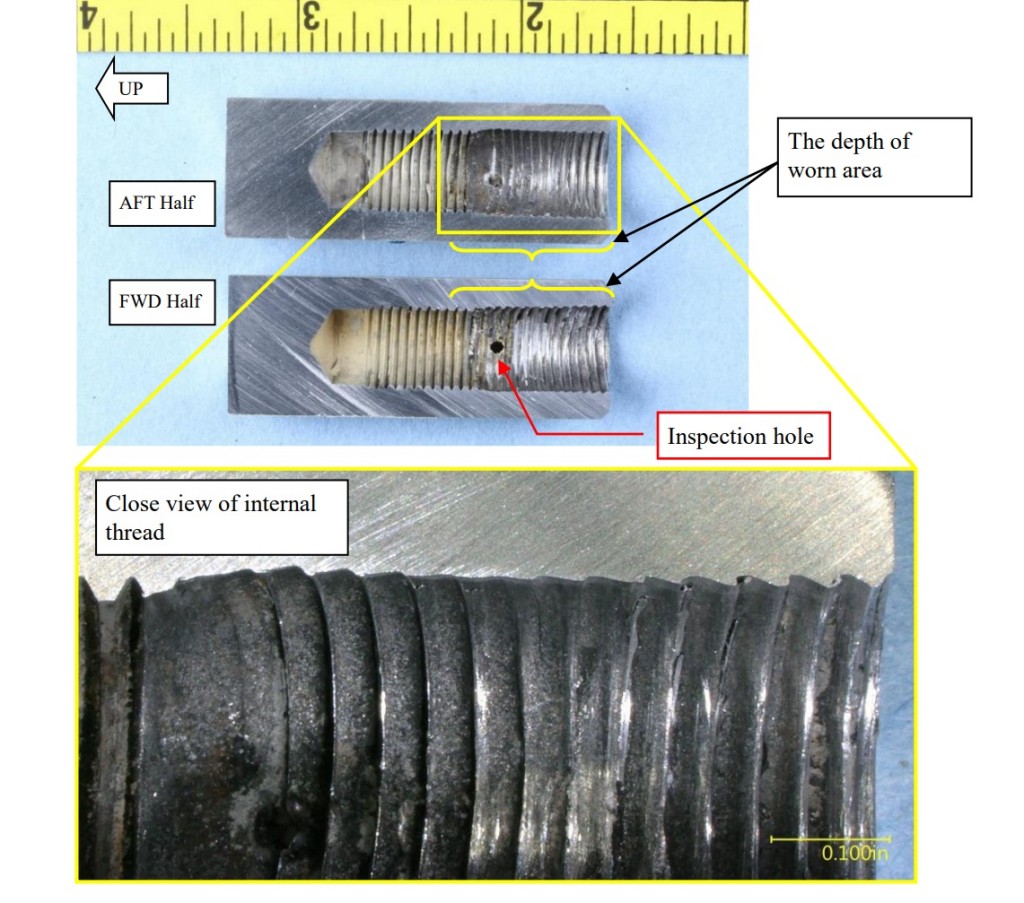 The torque stripe on the lateral servo push pull rod and rod end bearing was broken too, indicating an in-service loss of torque on that rod end as well (although there was no significant internal damage in that case).  The aft servo push rod and the rod end bearing were found in good condition. PK-FUP had been imported into Indonesia from Canada in October 2014.

The servos themselves were examined, tested in accordance with the Component Maintenance Manual (CMM) and found serviceable according to the KNKT.  However, the US National Transportation Safety Board (NTSB) commented in response to the draft report that: “The piston velocities indicated that they were not operating normally” and recommended further testing and the servo OEM, which does not appear to have been done as yet.

Another Accident During the Investigation

During the course of investigation, on 12 August 2015 [a] similar occurrence involving [an] Sikorsky S-76C+ happened in Nigeria.

….crashed into the lagoon at Oworonshoki area of Lagos, Nigeria. The two flight crew members and four of the ten passengers were fatally injured.

The investigation found that the push rod tube separated from rod end bearing. The jam nut was loose and was not seating against the push rod.

It is worth noting that those connections had also been torque stripped with a slippage mark on installation (a good practice but not a maintenance manual requirement at the time [see below]). The NTSB comment that the PK-FUP investigation only found the push rod / rod end separation on 22 August 2015, which they note was ten days after the Nigerian accident.  The NTSB say, without further elaboration “it should be noted that a more efficient and rapid investigation could have prevented the accident in Nigeria, which occurred 144 days after the Indonesian accident”. The KNKT had previously issued an undated Preliminary Report on PK-FUP.  This appears to have been before the detailed examination of the wreckage.  At that time a reported revision to the Operations Manual on automation use and changes to the recurrent training syllabus might have erroneously given the reader the impression that a pilot handling issue was involved. The Nigerian investigation has yet to issue a final report. On 12 August 2017 the Nigerian AIB issued an interim statement:

AIB has virtually completed all investigative actions and has initiated a follow-up action on interim safety recommendations-2015-009 with Sikorsky through National Transportation Safety Board, NTSB. The draft report will soon be sent to stakeholders for review and comments within 60 days.

That Nigerian AIB Safety Recommendation, in their Preliminary Report on 5N-BGD issued on 21 September 2015, was:

Sikorsky Aircraft Corporation should consider a redesign of the affected control push rod assembly by introducing additional wire locking safety features between the jamnut and the push rod to enhance better security.

On 19 November 2015, Sikorsky issued the revision of aircraft maintenance manual chapter 5 to re-inspect of the jam nut [sic] every 300 hours. The inspection includes the re-torque [of] the jam nut to 140 inch-pounds if it [is] loose.

The KNKT state that Heavilift have adopted a 100-hour periodicity for that check. When drafting their report KNKT had considered recommending “the installation of locking device to the jam nut or other method to prevent loosening of the jam nut”, similar to Nigerian AIB  Safety Recommendation 2015-009.  In response to the draft report, the NTSB commented that “through extensive testing” (not otherwise described in the report) “Sikorsky determined that using a higher torque and applying a torque mark” and presumably then crucially having a repetitive inspection of that torque mark,  “is sufficient to ensure the integrity of this connection”. We will update this article once the Nigerian Final Report is published.

UPDATE 22 March 2019: Despite the accident reports being published on both PK-FUP and the Nigerian accident, and the physical evidence eventually recovered, we are disappointed to see ill-informed theories spread on social media about the Indonesian accident being a Vortex Ring Sate (VRS) accident.  This misinformation appears to stem from premature linkage between the 21 March 2015 PK-FUP accident and the 23 August 2013 G-WNSB accident at Sumburgh due to the decent manoeuvre PK-FUP was undertaking at the time.  In that case an October 2013 UK AAIB special bulletin had identified that during the approach modelling suggested that the AS332L2 had reached VRS entry conditions during its approach to Sumburgh when airspeed had unintentionally dropped and rate of descent had increased due to the autopilot settings.  It appears that an erroneous interpretation of the PK-FUP accident developed after fixating on the autopilot settings while ignoring the rapid yaw evident on the recorded FDM data and video from the cabin, available before the physical evidence established the cause. 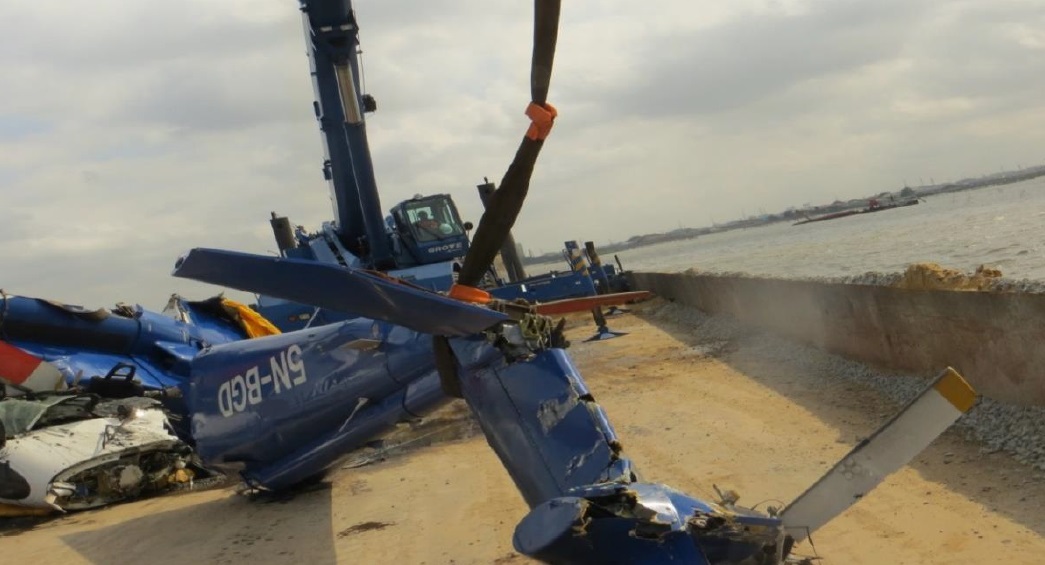 The investigation revealed the following:

The separation of the Forward Servo Clevis Rod Assembly from the bearing and Jam nut (Bell Crank Assembly) which is part of the Cyclic Control System responsible for stabilizing the attitude of the helicopter made the aircraft uncontrollable.