The US National Transportation Safety Board (NTSB) has reported on a fatal Sikorsky S-76A++ accident to a Gulf Of Mexico offshore helicopter during a post-maintenance check flight of avionics systems.  The accident occurred on 15 March 2013 to N574EH, operated by Era Helicopters LLC.  The pilot and two mechanics died. 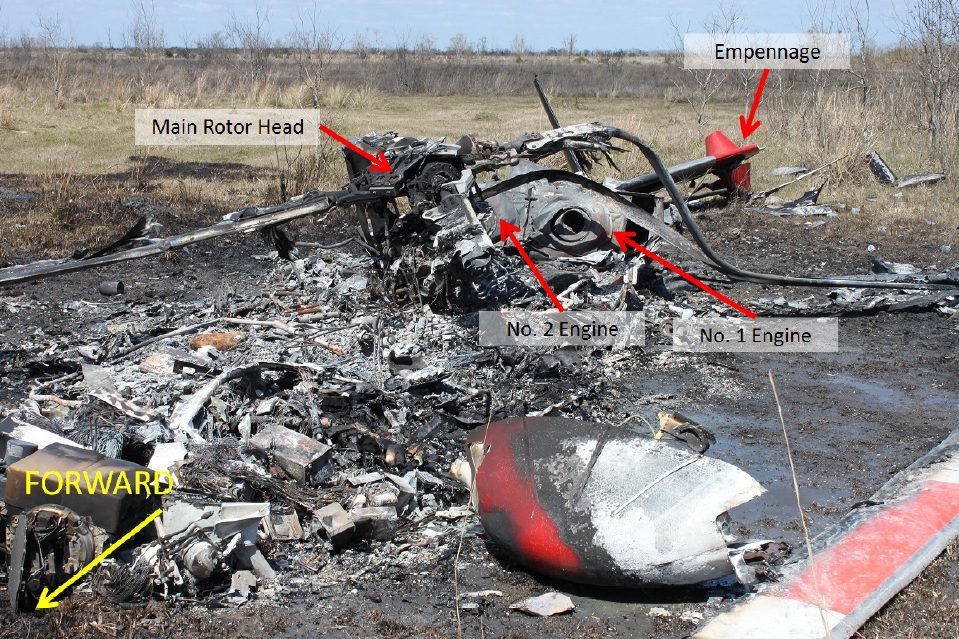 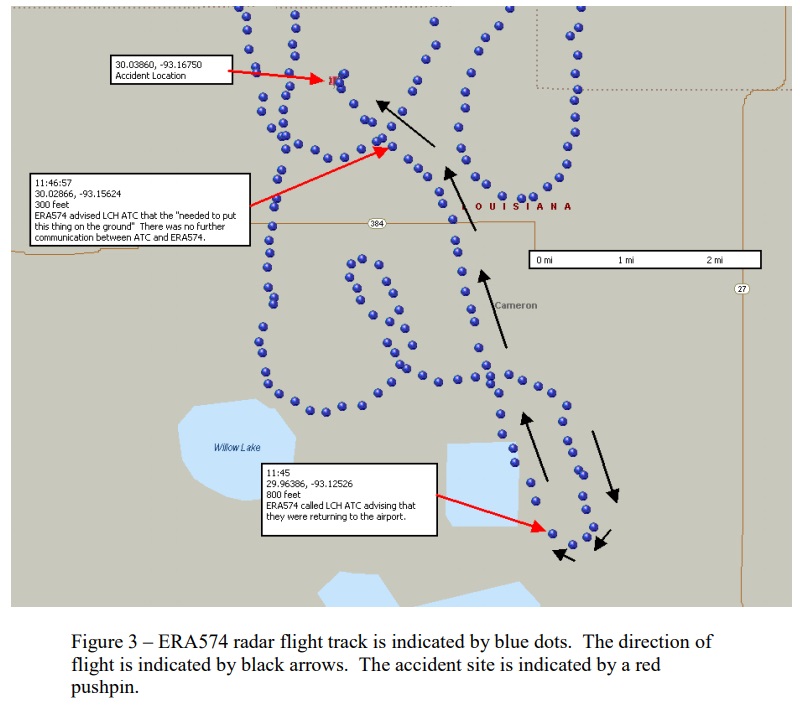 Two minutes after this call, the pilot radioed the tower controller and his company’s dispatcher, stating that he had a problem and would be landing off-airport immediately. Several ground witnesses noticed the helicopter as it flew toward the accident site, and it was making an unusual noise, described as grinding, screeching, or whistling. The helicopter impacted with a high vertical descent rate and a postcrash fire ensued.

The resultant imbalance of the tail rotor fractured the tail gearbox (TGB) output housing studs and most likely tripped the CVR g-switch, which cut off the CVR.

UPDATE 17 March 2019: Our diligent readers have correctly highlighted that this NTSB statement about the g-switch is erroneous as it isn’t compatible with the CVR transcript and the earlier discussion of subsequent radio calls to air traffic.

As the TGB output housing began to separate from the center housing, the gears likely began going out of mesh, allowing the output bevel gear to eventually contact the TGB center housing. This condition likely resulted in the loud, unusual noise reported by witnesses, as well as a drag force on the tail rotor drive system. As the pilot attempted to land, he likely shut the engines down in conjunction with an autorotative landing. Because the tail rotor drive system and main transmission remained mechanically linked, when the engines were shut down, it is likely that main rotor speed (Nr) degraded due to the compromised TGB. As a result, the helicopter developed a high vertical descent rate until ground impact.

The red blade spar fracture signatures were consistent with a fast-growth failure mode. Plausible fast-growth failure modes that were examined included a discrete impact event (e.g. object strike), anomalous operation of the pivot bearing, and a fracture of the pitch horn box (the structure which attaches the pitch horn to the blade and to which the pivot bearings and bumper attaches). With the lack of available evidence because the red blade was not recovered, the specific failure mode could not be determined during the investigation.

The NTSB discuss the maintenance history of the tail rotor red/yellow blade assembly:

Blade assembly S/N A137-00708X was last removed from a different helicopter (N578EH) on January 7, 2012, with the cause for removal listed as paint erosion and a 1500 hour inspection that was due. Blade assembly S/N A137-00708X was subsequently sent to a Bell Helicopter Broussard, formerly Rotor Blades Inc. (RBI), in Broussard, Louisiana. Work performed on the blade assembly by Bell Helicopter Broussard, under work order no. S76T-137-00708, included replacement of the polyurethane strips, rubber boots, and compliance with the 500-hour and 1500-hour inspections. The airworthiness approval tag (FAA form 8130-3) for blade assembly S/NA137-00708X, signed on March 22, 2012, stated the blade was also refinished and balanced.

On March 7, 2013, maintenance records showed that an Era technician performed a tail rotor balance ‘light on wheels’ inspection on the accident helicopter. This tail rotor balance inspection was approved by an Era supervisor on March 9, 2013. On March 10, 2013, a S-76 HEMS AAIP airworthiness check was accomplished as a final maintenance action to approve the helicopter for flight.

The NTSB issued the following, rather inconclusive, probable cause:

On August 19, 1991, a Sikorsky S-76A+ helicopter, S/N 760223, performed a precautionary landing on an offshore platform after the crew experienced a heavy vibration that lasted about 4 seconds. The precautionary landing took place about 15 minutes after the crew experienced the heavy vibrations. Upon landing, two opposing tail rotor blades were found to have departed the tail rotor. The missing tail rotor blades were never recovered. A small central section of the affected spar was found between the retention plates. The affected components were sent to SAC’s materials engineering lab for investigation. Lab examination revealed evidence consistent with one of the tail rotor blades fracturing first, and the resultant shift in the center of gravity and imbalance in centrifugal forces led to the opposing blade to eventually fracture as well. The remnant spar did not show evidence of ply waviness consistent with a manufacturing anomaly, rubbing of the plies consistent with spar delamination, or a material defect. The tail gearbox housing exhibited a partially circumferential overload fracture across three of the flanges used to attach the output housing to the center housing. Maintenance records revealed the tail rotor spar had a TSN of 1,571 hours, with 1,507 hours accumulated on the incident helicopter.