On 20 April 2020 Sikorsky S-61N N908CH of Construction Helicopters Inc (CHI Aviation), experienced a loss of control in flight and rolled on its side during an emergency landing at Camp Dwyer, Helmand Province, Afghanistan. 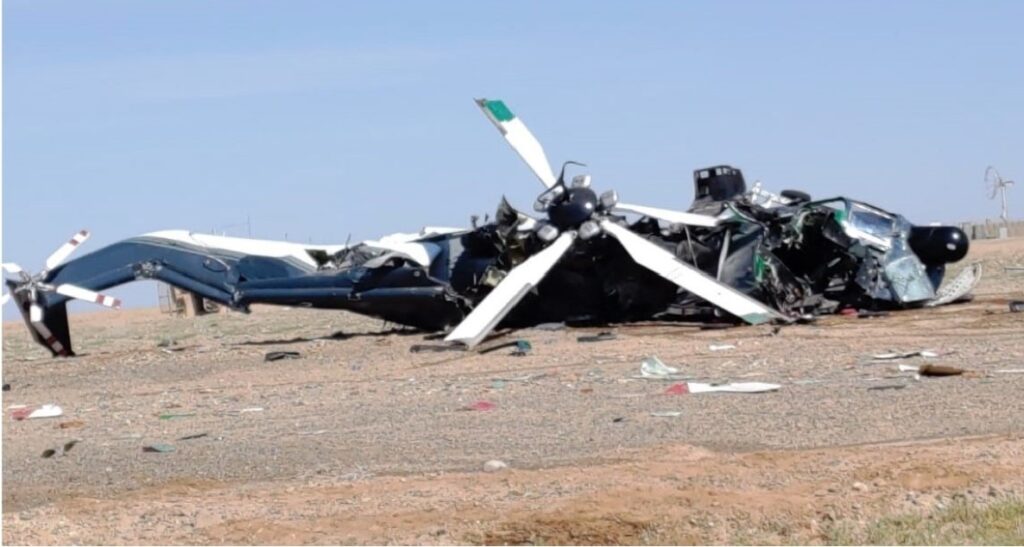 The two pilots and crew chief onboard were all seriously injured.  The helicopter was built in 1977 and its Aircraft Total Time (ATT) was 38,496 hours.  It was conducting a Part 135 cargo flight under contract to the US Department of Defence (DoD).

The Afghanistan Civil Aviation Authority delegated the investigation to the US National Transportation Safety Board (NTSB).  The NTSB has so far only published an insubstantial preliminary report but did release the far more extensive Public Docket on 22 December 2022.  There the NTSB explain that:

The Vision 1000 recording showed that c 8.75 seconds prior to the end of the recorded data from the accident flight, the left-hand pilot’s left pedal moved fully forward without pilot input.  Consequently the helicopter yawed to the left for the rest of the recording.

The cockpit auxiliary hydraulic pressure gauge indicator was within the green arc during this time, and indicated about 1,500 psi about 1 second prior to the left pedal movement, after which it dipped to 1,300 psi (near the bottom of the green arc).

Examination of the auxiliary servocylinder assembly found a fatigue crack on the housing of the yaw channel pedal damper check valve as well as cracks and fractures on its bolts. 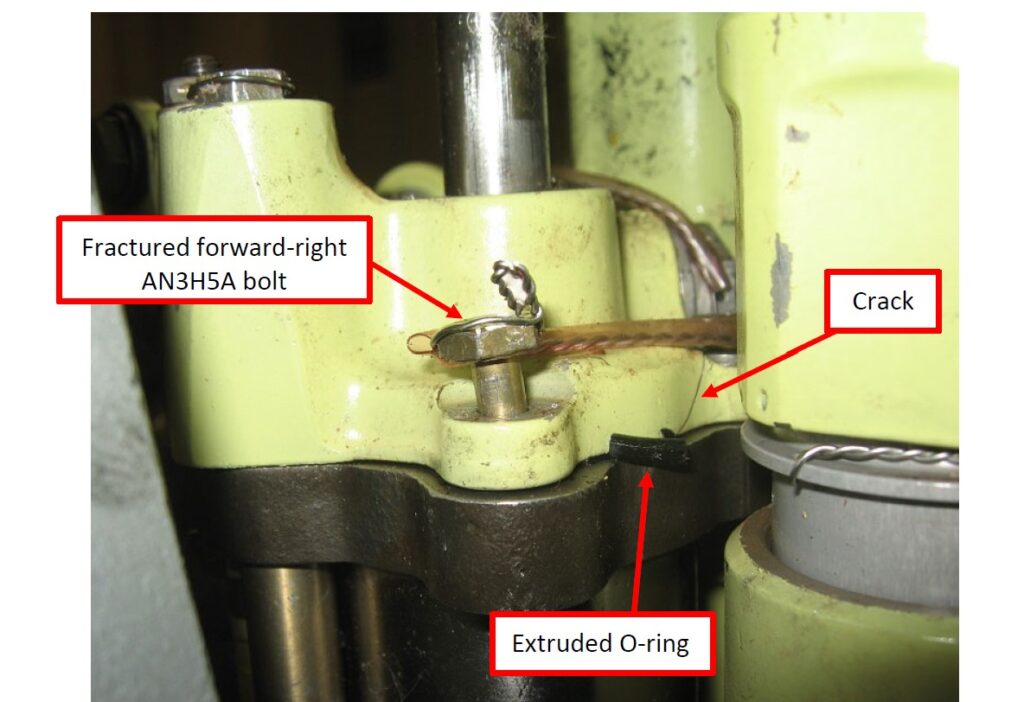 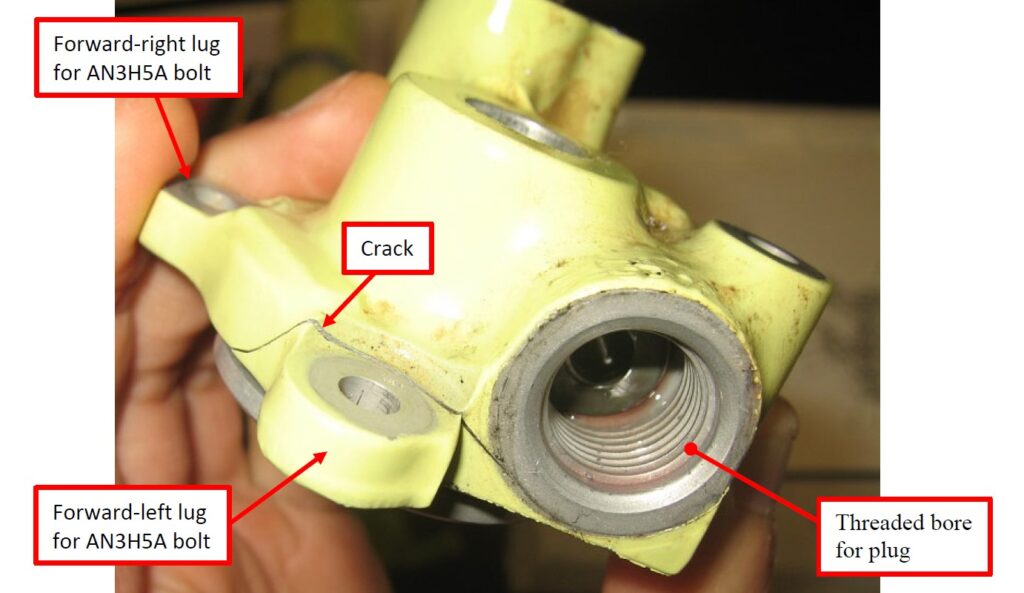 The auxiliary servocylinder assembly has a 2,500 hour Time between Overhaul (TBO).  The unit fitted to N908CH was released after its last overhaul on 1 September 2017 by JB Helicopter Accessory Service, a Canadian maintenance organisation at a Component Time Since New (CTSN) of 34,184 hours.  It was fitted to N908CH in Afghanistan at ATT 37,102 Hours.  However:

On July 9, 2019, at an ATT of 37,611.5 hours, there was an entry in the discrepancy section of the daily flight log that stated “aux hydraulics leaking” and “aux servo yaw channel leaking.” The auxiliary servocylinder assembly was removed and had a CTSN of 34,694.0 hours and a CTSO of 509.6 hours. The auxiliary servocylinder was repaired from July-August 2019 at JB Helicopter Accessory Service…  According to the repair paperwork, the yaw piston seals were replaced and the unit was returned to CHI Aviation in Afghanistan.

After it was refitted:

On November 11, 2019, at an ATT of 38,021.0 hours, there was an entry in the discrepancy section of the daily flight log that stated “yaw pedals move L/H during normal operation.”  The corrective action section of the flight log stated the yaw open loop spring was adjusted.

The recent maintenance history is therefore:

Sikorsky Safety Advisory No. SSA-S61-08-001, dated February 28, 2008, discussed events where a fracture of the pedal damper check valve bolts (P/N AN3H5A) resulted in a loss of auxiliary hydraulic servo pressure and a subsequent uncommanded yaw of the helicopter.

The letter stated that proper torque of the AN3H5A bolts was crucial, and that failure to use the correct bolts and apply the proper torque during their installation may result in a failure of these bolts.

A search of the NTSB and Sikorsky records could not determine an event in the timeframe of this advisory that would have been the catalyst for its release.

There is no evidence in the Public Docket on maintenance standards.

Although the investigation was unable to determine if the flight crew attempted to press the right pedal after the onset of the left yaw, crew movement of the right pedal would likely have been difficult due to the presence of residual hydraulic pressure within the pedal damper piston, which led to the uncommanded full left pedal movement. Thus, the pilots had limited available options to slow the left yaw.

After the onset of the left yaw, the right seat pilot set the speed selector levers (engine throttles) to idle, which reduced engine power to the rotor system, reduced main rotor torque, and substantially increased the left yaw rate (as observed in the image recorder data).

After the initial loss of yaw control, the helicopter also experienced large excursions in the pitch and roll axes. The excursions in pitch and roll, as evident in the recorded angular data and acceleration data, could have affected the pilots identification of the yaw direction after the emergency autorotation procedures were initiated.

…whether the pedal damper check valve housing bolts were improperly torqued during the last overhaul of the auxiliary servo cylinder, which occurred about 2.5 years and 1,270 hours before the accident. However, examination of the bolts found no evidence indicating that they had been over- or under-torqued.

Nevertheless, the addition of a life limit for the pedal damper check valve housing could reduce the possibility of fatigue crack initiation during operation.

At the time of the accident, there was no specific inspection for the pedal damper check valve housing and its bolts after the installation of the auxiliary servo cylinder onto the helicopter. The required safety inspection, occurring every 15 hours, and the required phase V inspection, occurring every 150 hours, both comprised a general visual inspection of the rotor flight controls. The pedal damper check valve would not be readily visible during these generalized visual inspections due to the installed position of the auxiliary servo cylinder assembly.

Further, the check valve housing bolts would likely appear to be installed properly unless the auxiliary servo cylinder was removed from the helicopter and the bolts were checked using a torque wrench. Thus, the inspection guidance at the time of the accident would not likely readily identify fatigue cracks on the pedal damper check valve housing and its bolts.

Inspections specifically tailored to the pedal damper check valve housing would most likely increase the probability of finding fatigue cracks.

This is a reminder that even on mature types, procedures may need to be enhanced late in life.

UPDATE 1 February 2023: The NTSB determined the probable cause to be:

Fatigue cracking of the auxiliary servo cylinder’s pedal damper check valve housing and its bolts, which caused the sudden and uncommanded movement of the helicopter’s left pedal and a subsequent left yaw that continued until ground impact.